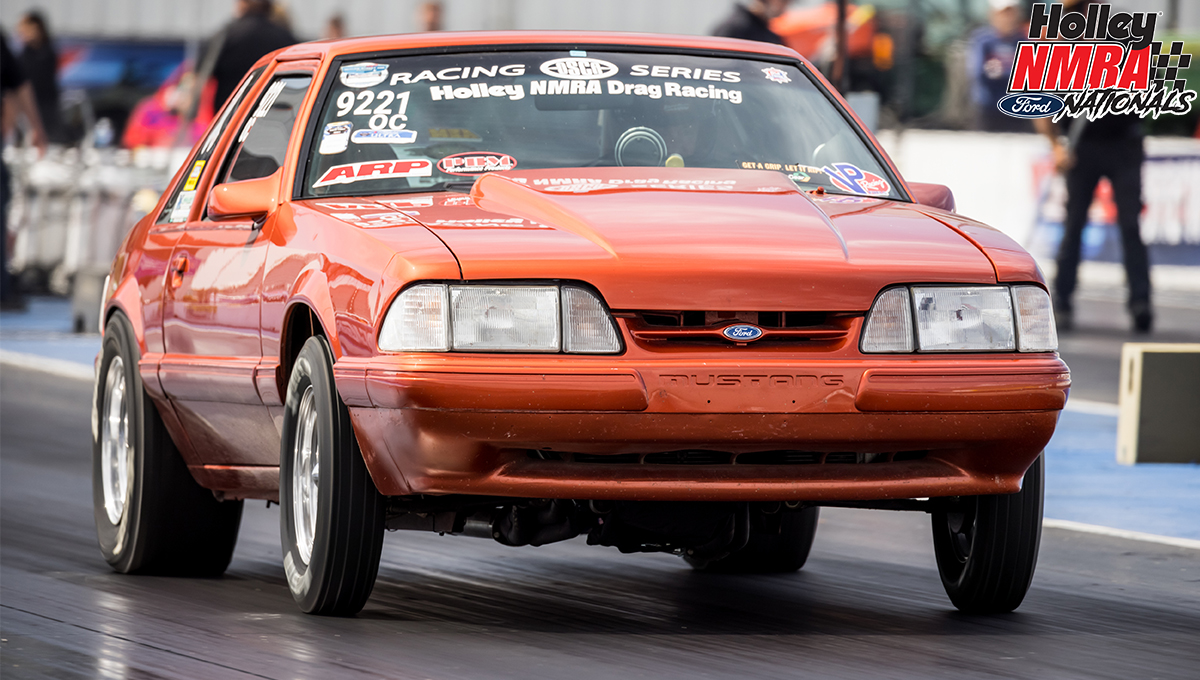 We are up and running at World Wide Technology Raceway for day two of the 16th Annual NMRA/NMCA Super Bowl of Street-Legal Drag Racing Presented by HPJ Performance!

NMCA/NMRA officials closely watching the weather have determined that the NMCA MagnaFuel Open Comp/NMRA ARP Open Comp All-Star Shootout will be moved from this event to the Inaugural Arrington Performance NMRA/NMCA Power Festival presented by Force Engineering, July 22-25, at U.S. 131 Motorsports Park in Martin, Michigan. The plan for Saturday is as follows: We have revised the run order as we are trying to move through the day as quickly as possible! 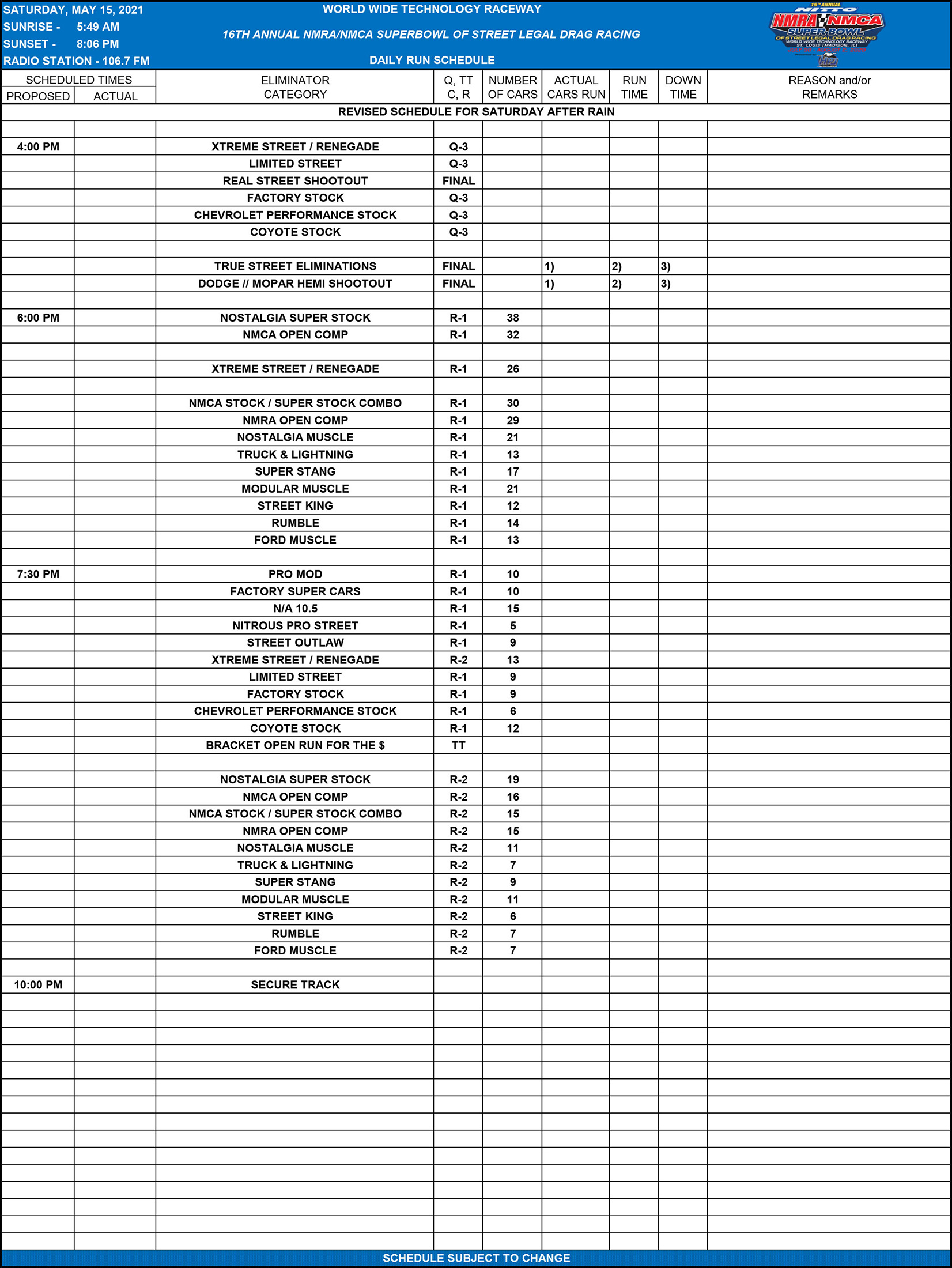 Sunday's schedule is as follows: 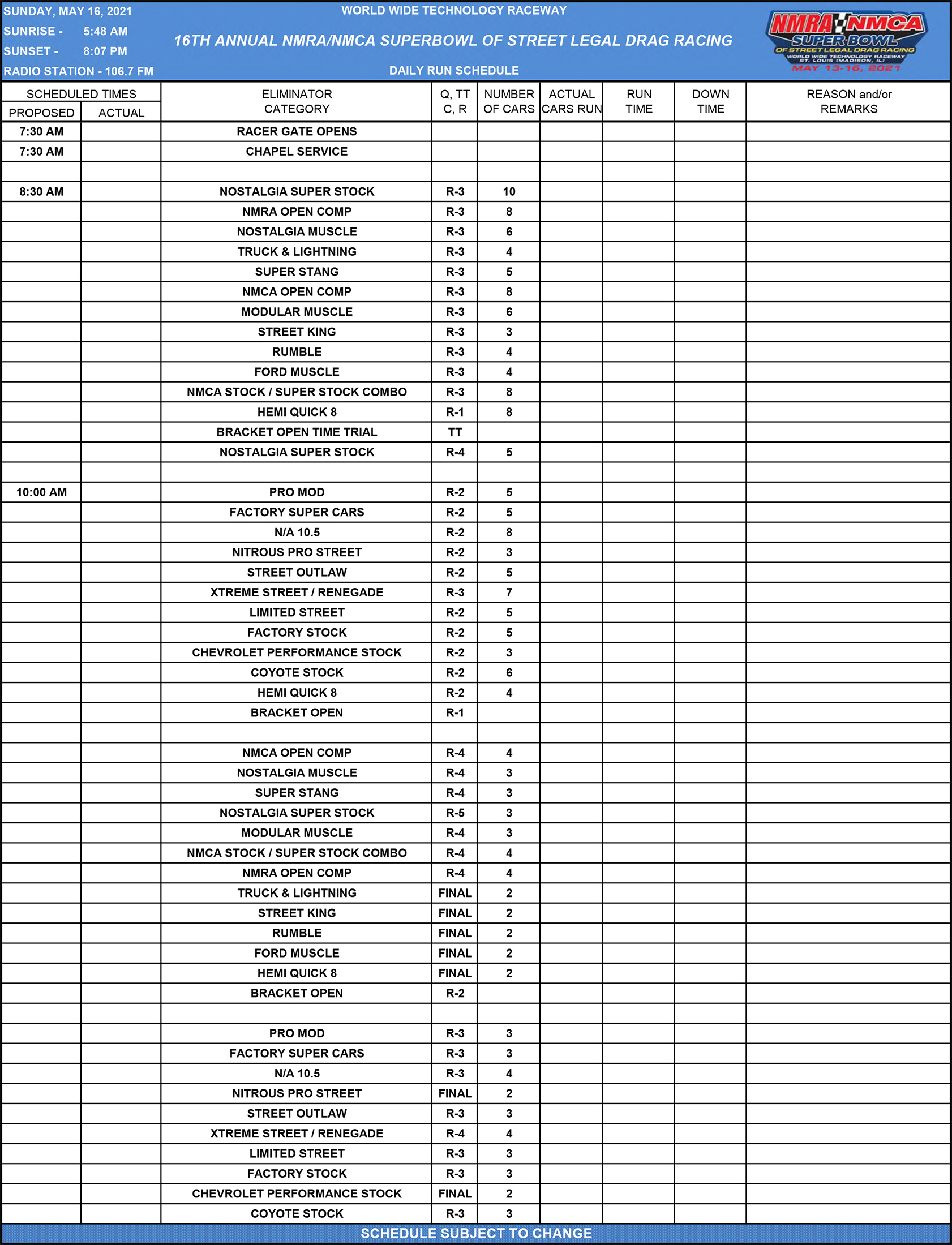 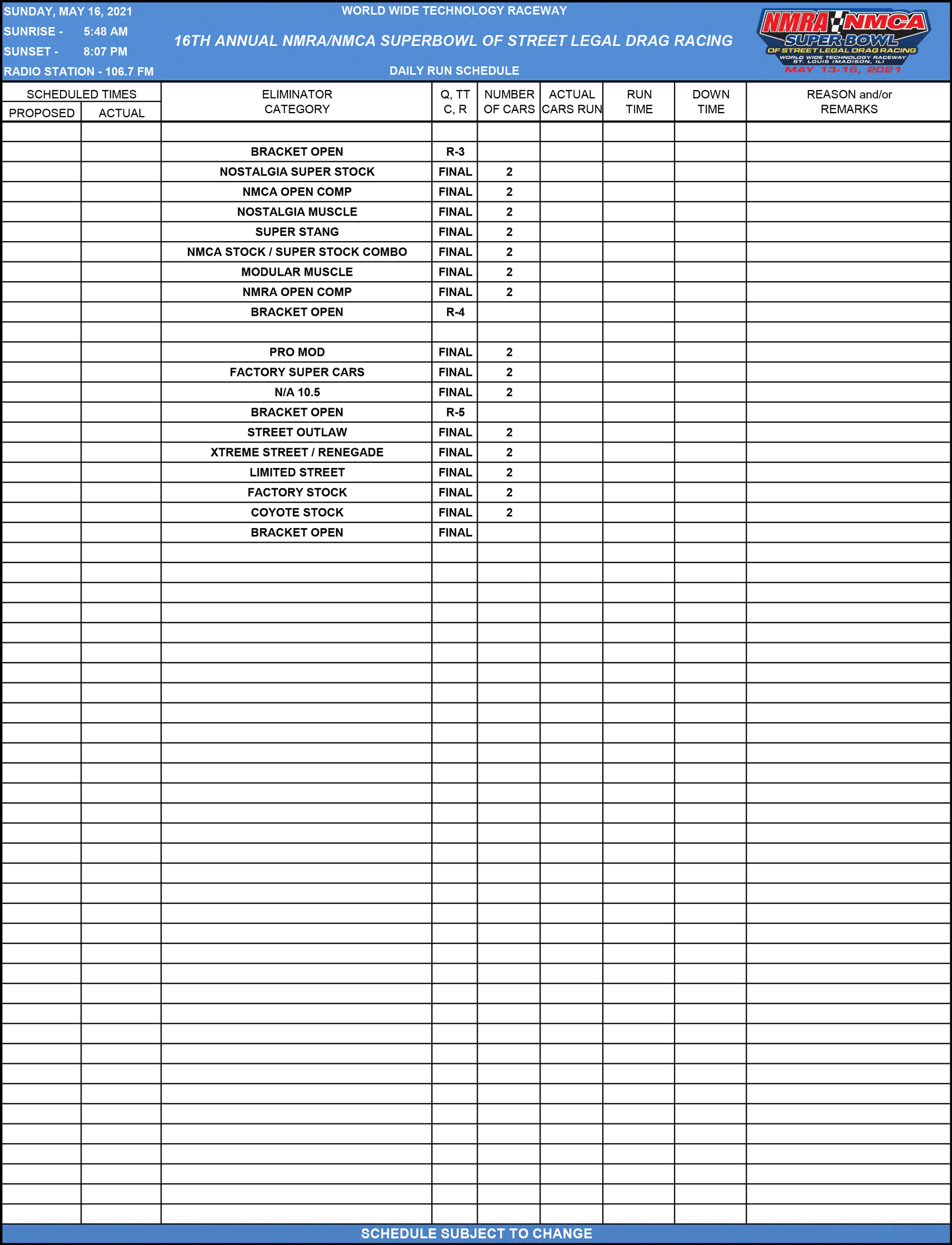 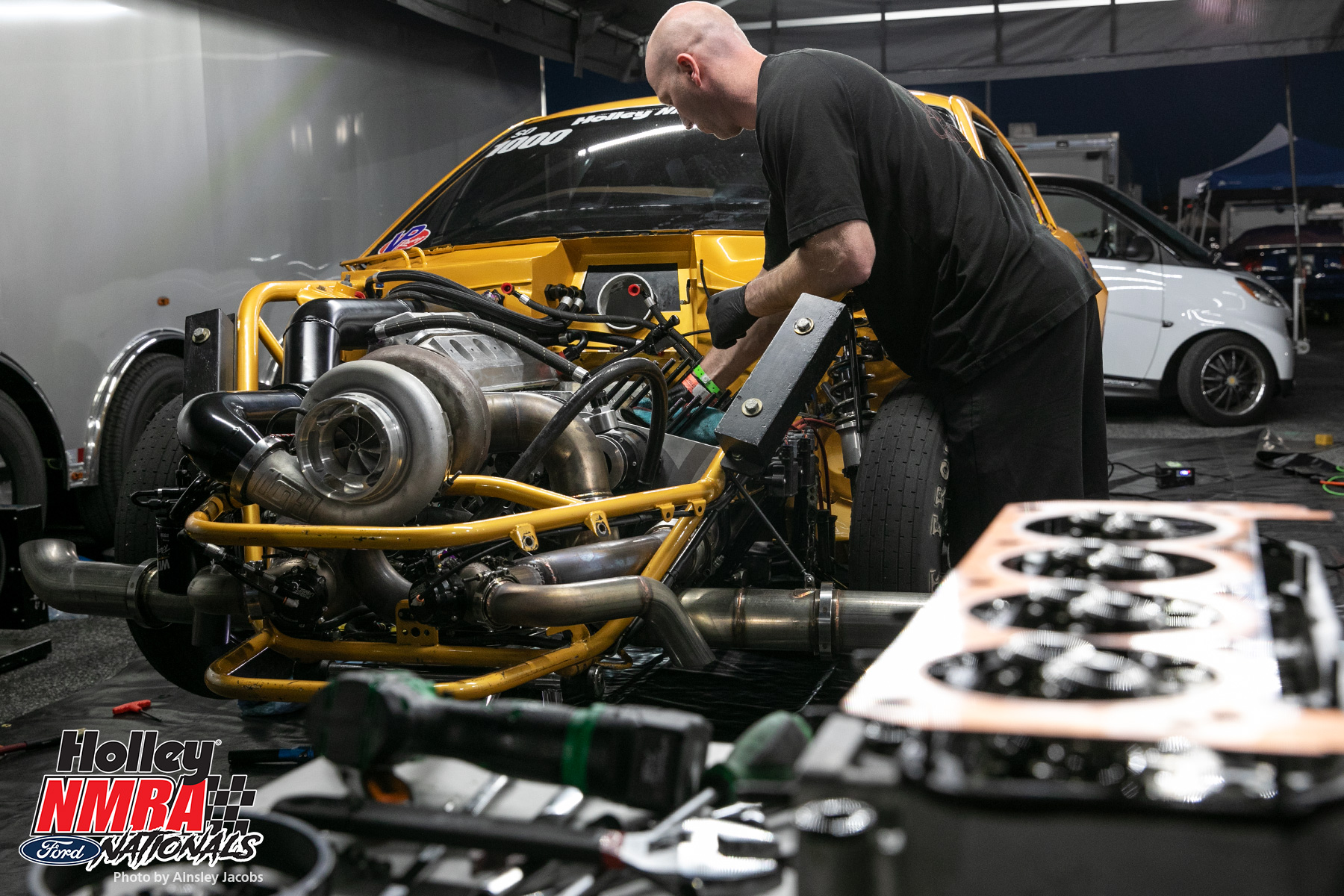 Current NMRA VP Racing Madditives Street Outlaw points leader Steve Halprin had a tough go of it during the second qualifying session in the NMRA/NMCA combined category. The number five cylinder hurt itself 3.8-seconds into the 4.423 at 166.91 mph blast and the turbocharged D&D Performance/Walsh Motorsports-backed entry needed a little TLC as a result. Car chief Justin Haddon (pictured), Halprin, and Danny Oliphint had the head pulled and the piston re-ringed in just about no time flat so that the BES-built 430 ci inch engine will be ready to run the third session today. 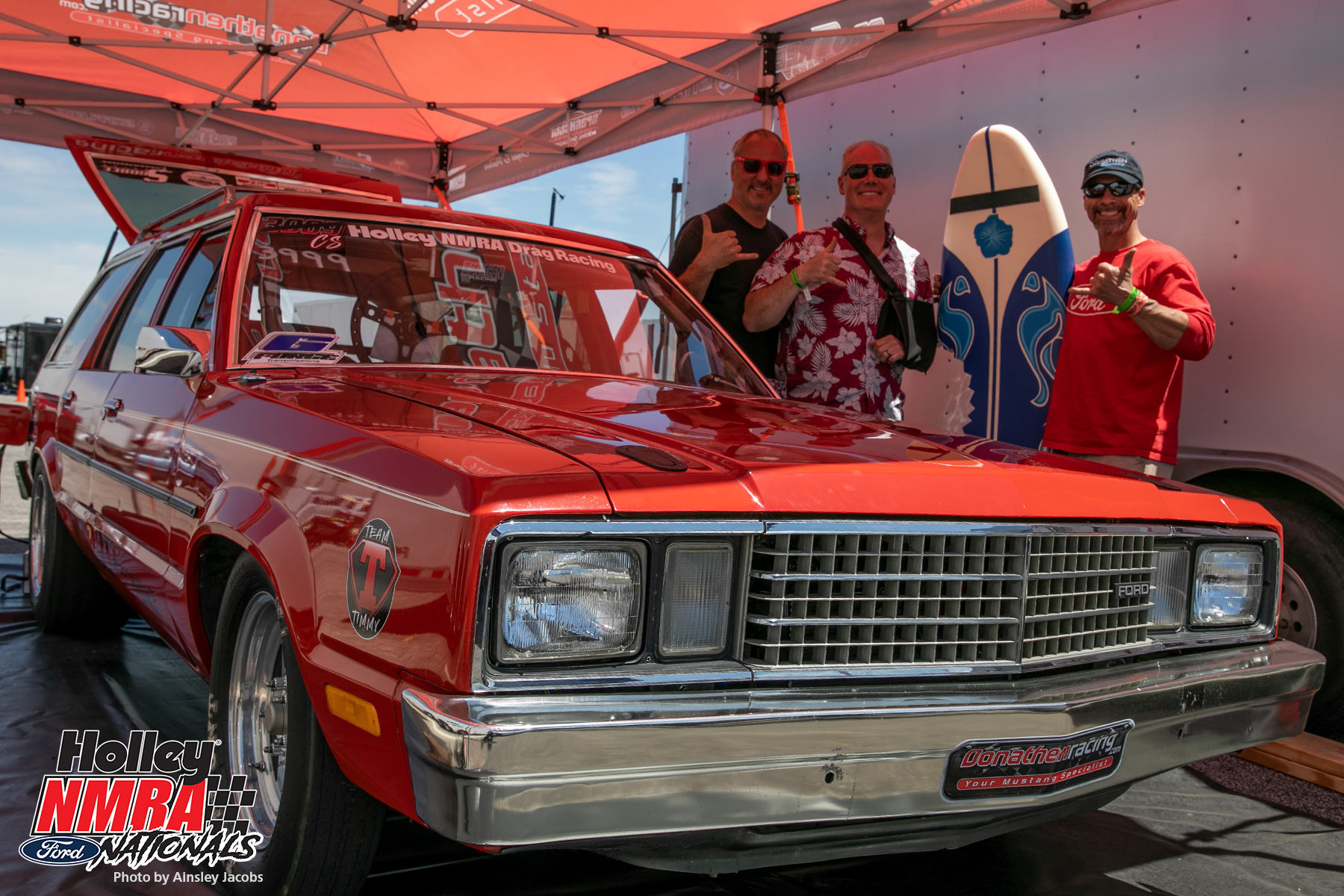 When Tim Donathen was tired of looking at Fox bodies all the time at his Donathen Racing shop, he decided to build something different for himself to enjoy in NMRA G-Force Transmissions Coyote Stock. The result, which he has on the property this weekend, was an absolutely killer 78 Ford Fairmont station wagon. Tons of interesting touches from the Budweiser bottle overflow tank to the fuel cell housed in an old cooler to a picnic basket in the back and a surfboard Velcroed to the top (which accidentally made its way down the track at 130+mph with the Beach Boys blasting on the radio when the guys forgot to remove it after the burnout) and so much more Donathen's also updated the iconic classic with a new Gen 3 Coyote engine and G-Force G101-A manual transmission. The owner had shoulder surgery a week ago, so Bob Cosby has stepped in for driving duties this weekend and has run as quick as 9.868 at 135.37 mph so far in qualifying. 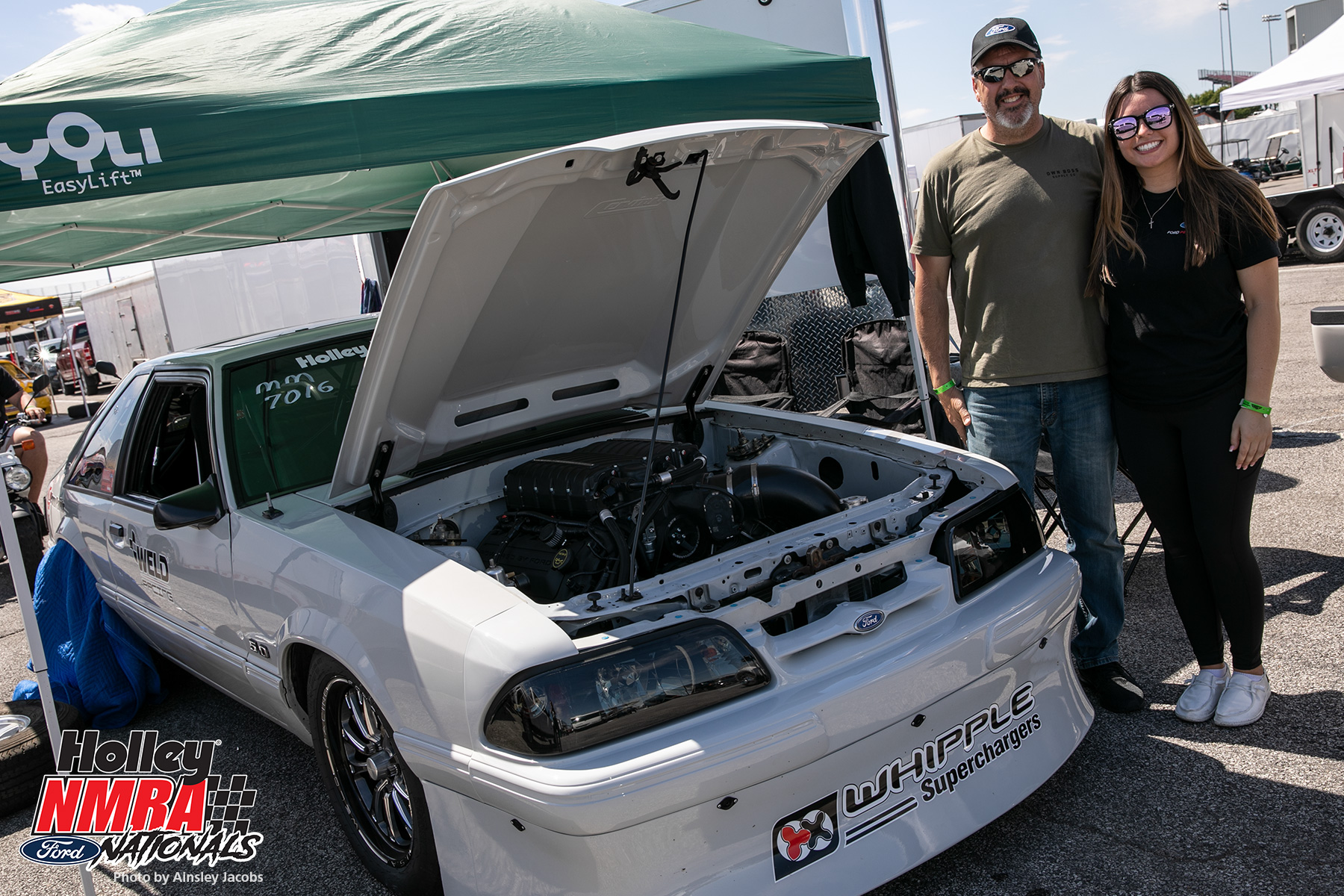 Her first NMRA race and her first event with her 89 Ford Mustang in its current configuration, NMRA Exedy Clutch Mod Muscle newcomer Autumn Schwalbe is excited to learn the ins and outs of index racing. Her smoke gray Fox body was formerly owned by NMCA VP Racing Lubricants Xtreme Pro Mod driver Craig Sullivan back in the early 00s and now features a Gen 2 Coyote engine with a 3.0L Whipple supercharger that she swapped in with her father, Darren Schwalbe. Her C4 transmission broke earlier in the week during testing, but her friend, Brandon, loaned her his so that she could make this race. She's also supported by Weld Wheels, Woolf Aircraft, Own Boss Supply Co, Ricart Ford, VP Racing Fuels, and her boyfriend, Chris Bluga. While qualifying on Friday, Schwalbe clocked a new personal best of 10.21 at 137mph with an 0.08-second light to sit sixteenth in the field. Schwalbe recently graduated college, where she had also interned at Ford Motor Company, and she has transitioned to now working full-time for the Ford Performance marketing team. 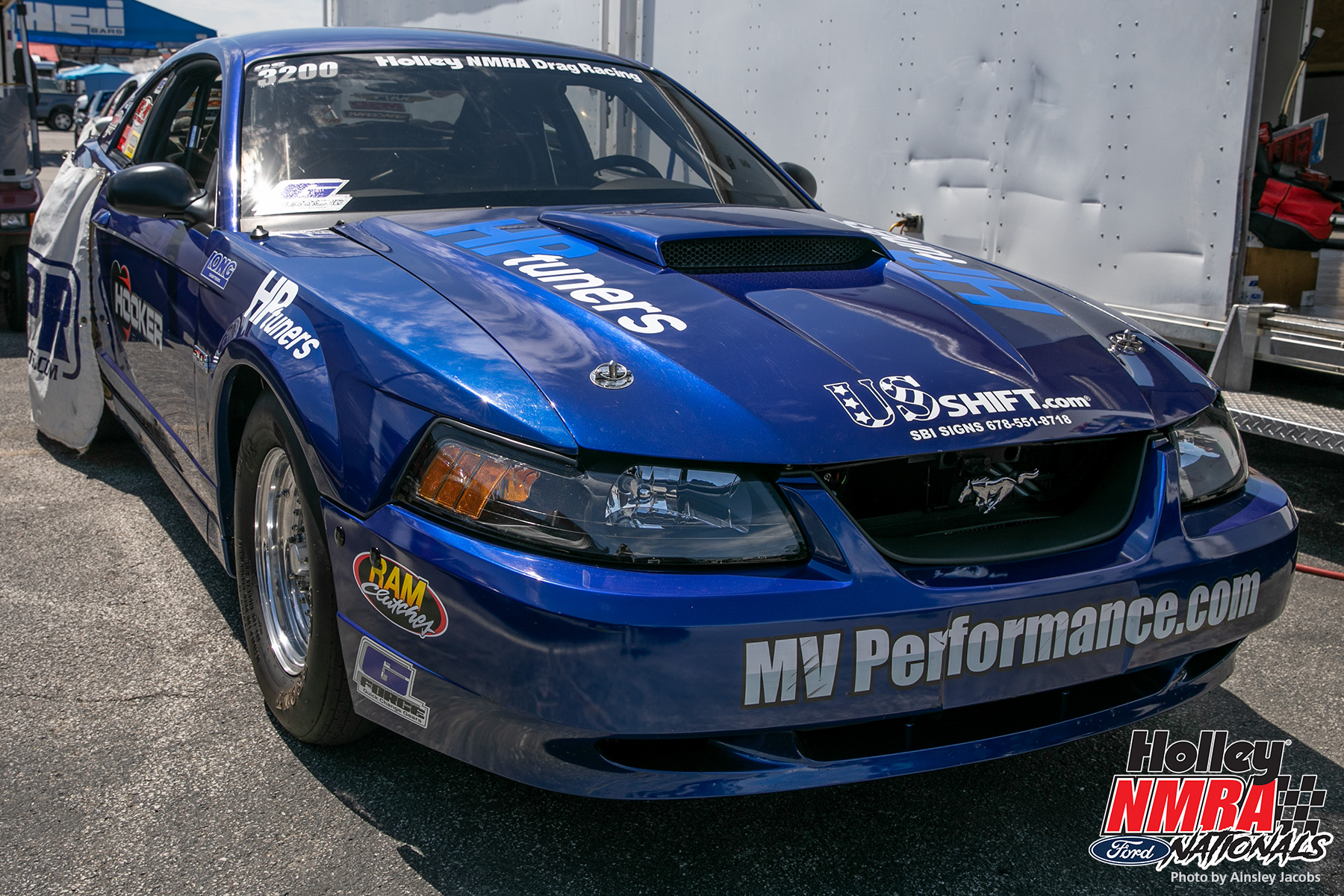 Winning the NMRA G-Force Transmissions Coyote Stock class at the last race in Atlanta sure has helped Tim Matherly of MV Performance fame get more support for his program. After the event, HP Tuners came on board to join his program, and he's made a few updates between then and now to help improve his 03 Mustang but is staying silent on the specifics until he can validate whether or not those tweaks will make a difference or not. Currently, Matherly sits eighth after two qualifying hits with a 9.821 at 137.19 mph run and has one more shot to improve prior to the start of eliminations. 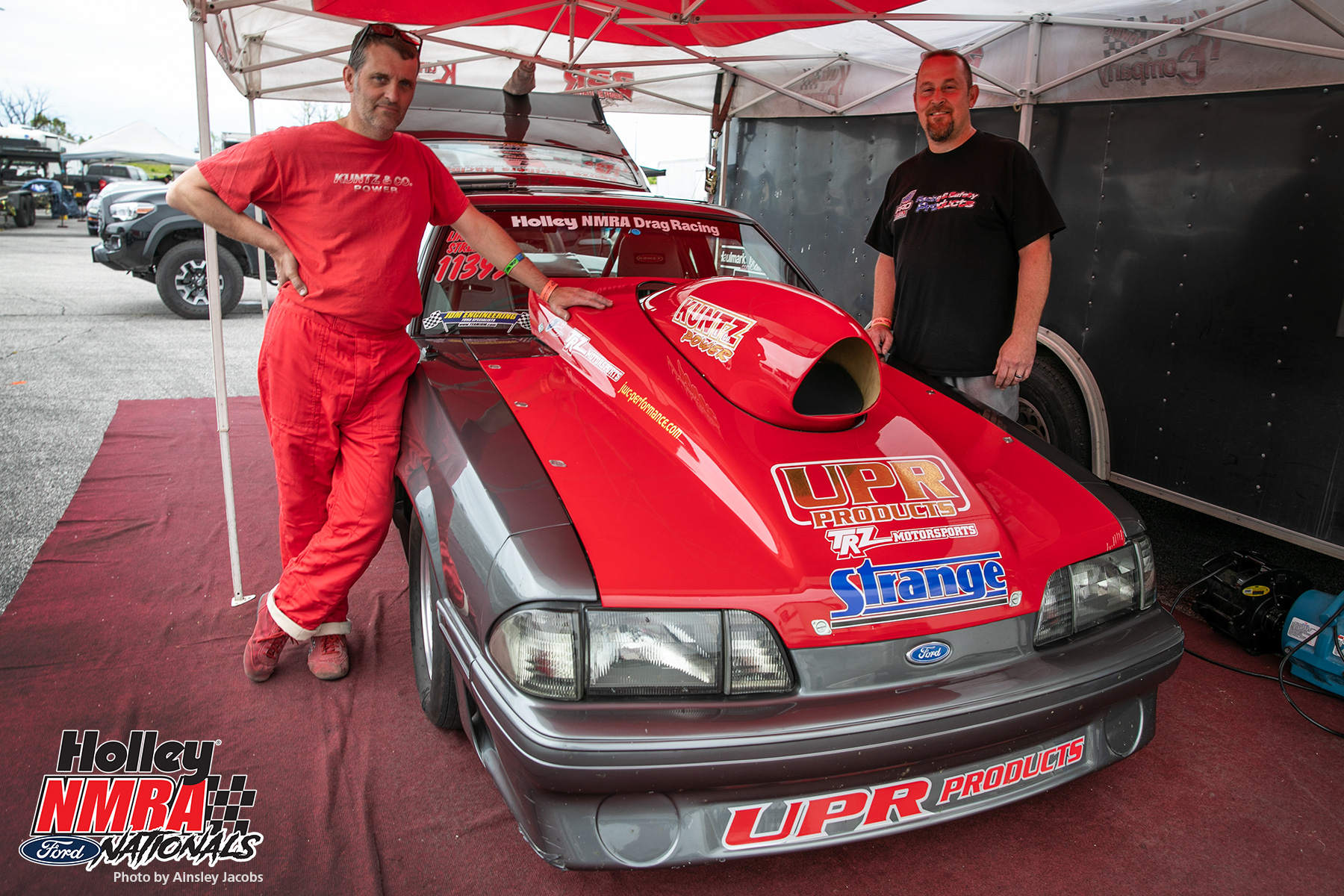 Two-time NMRA Richmond Gear Factory Stock champion Dan Ryntz (right) has stepped up to NMRA JDM Engineering Limited Street, official this weekend. When Charlie Booze Jr (left) tried to field two cars at the NMRA season opener in Florida earlier this year (in G-Force Transmissions Coyote Stock and JDM Engineering Limited Street), he realized it was too tight a turnaround between the schedule and servicing to make it happen. So, he asked if Ryntz wanted one of his rides. Thanks to a last-minute change in Ryntz's obligations, he was able to do so and the men went testing a few days before coming out to this weekend's 16th Annual NMRA/NMCA Super Bowl of Street-Legal Drag Racing Presented by HPJ Performance. On Thursday, the first run resulted in the Kuntz & Co.-powered car blowing its tires off before the next one wound up with a big ol wheelie. Hunting for somewhere in the middle, Booze adjusted the tune up and Ryntz qualified quite well in the significantly quicker class, landing third in the order with an 8.335 at 162.51 mph hit and Ryntz has been grinning ear to ear ever since. 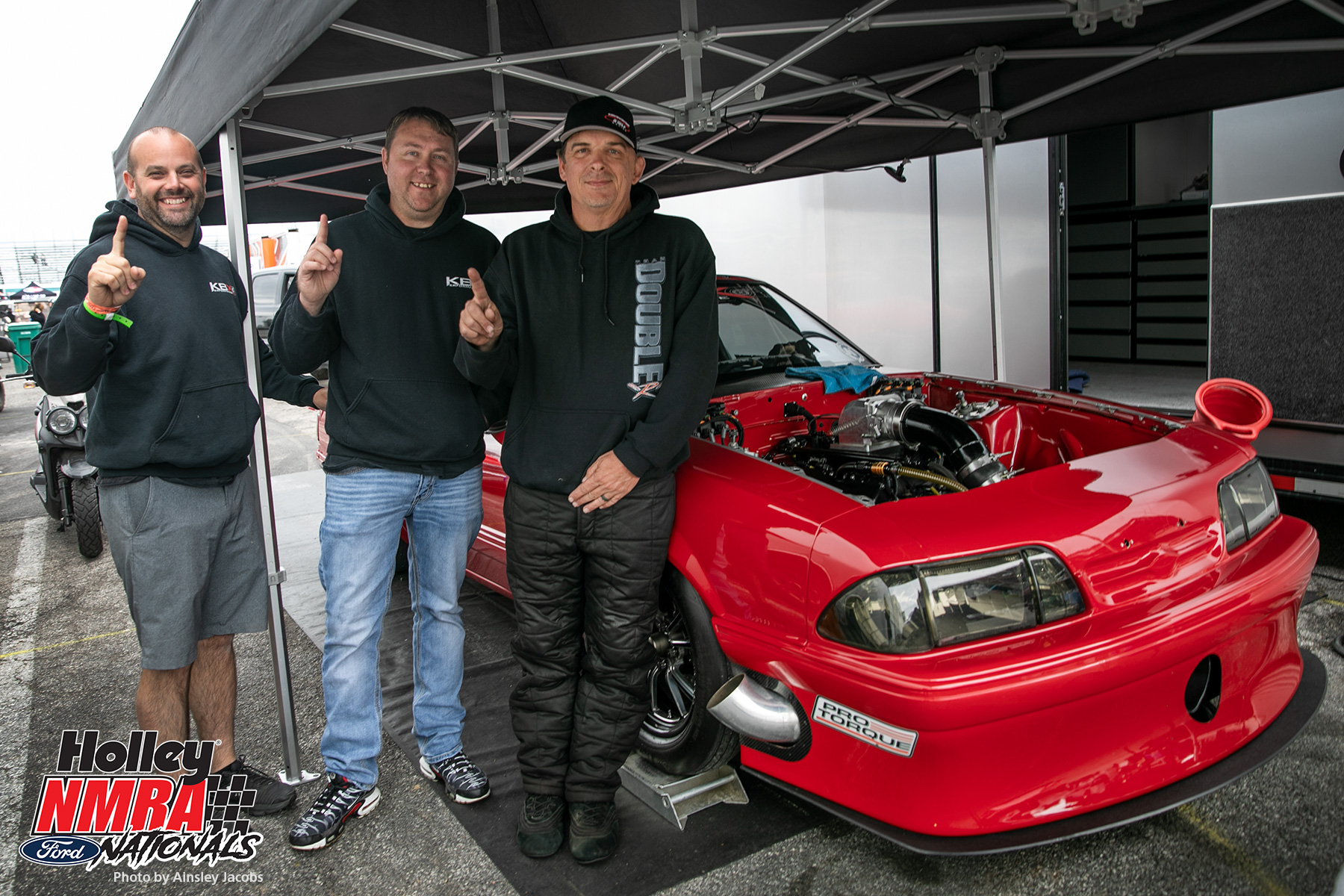 There's not much more to say about driver defending NMRA Edelbrock Renegade champion Joel Greathouse (right), car owner Jeremy Wolf (middle) and tuner Justin McChesney (left) other than the fact that the KBX Performance group is continuing their sheer domination of the category. The men cleared three rounds of qualifying with their turbocharged 93 Mustang in the number one spot on a 4.522 at 155.15 mph pass in a huge group of 26 entries for the combined NMRA Edelbrock Renegade/NMCA Xtreme Street class. Good air and a few tweaks to the transmission and ProTorque converter have helped them pick up a few numbers to contribute to the run, also a new personal best, and they've promised that they aren't done yet! 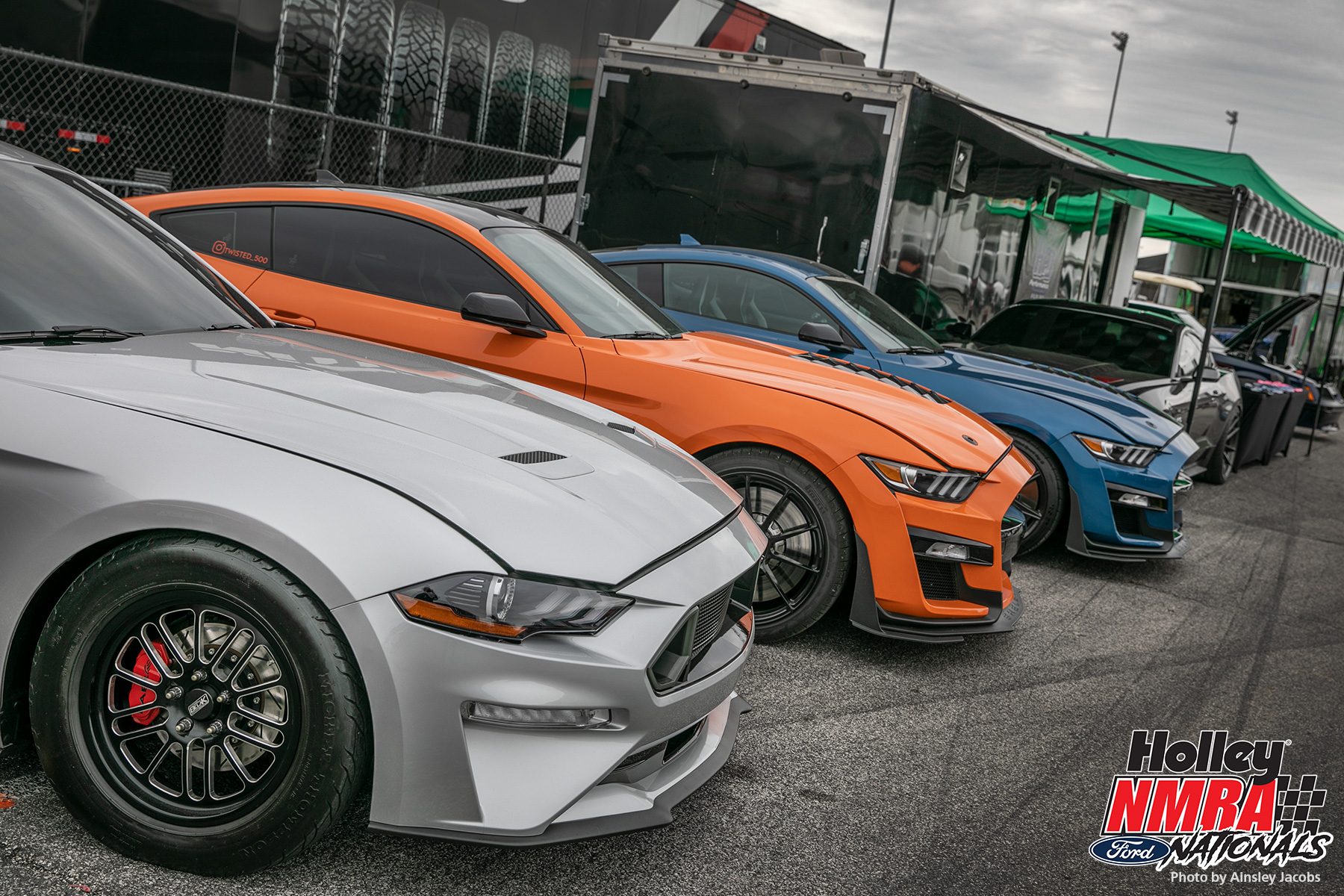 Thanks to HPJ Performance, presenting sponsor of this weekend's 16th Annual NMRA/NMCA Super Bowl of Street-Legal Drag Racing, for helping make the event possible. HPJ is set up on our vendor midway with a slew of seriously cool Mustangs. Stop by this weekend to take a look and see all of the parts they've got to take your ride from mild to wild so that you can build your car the HPJ way. 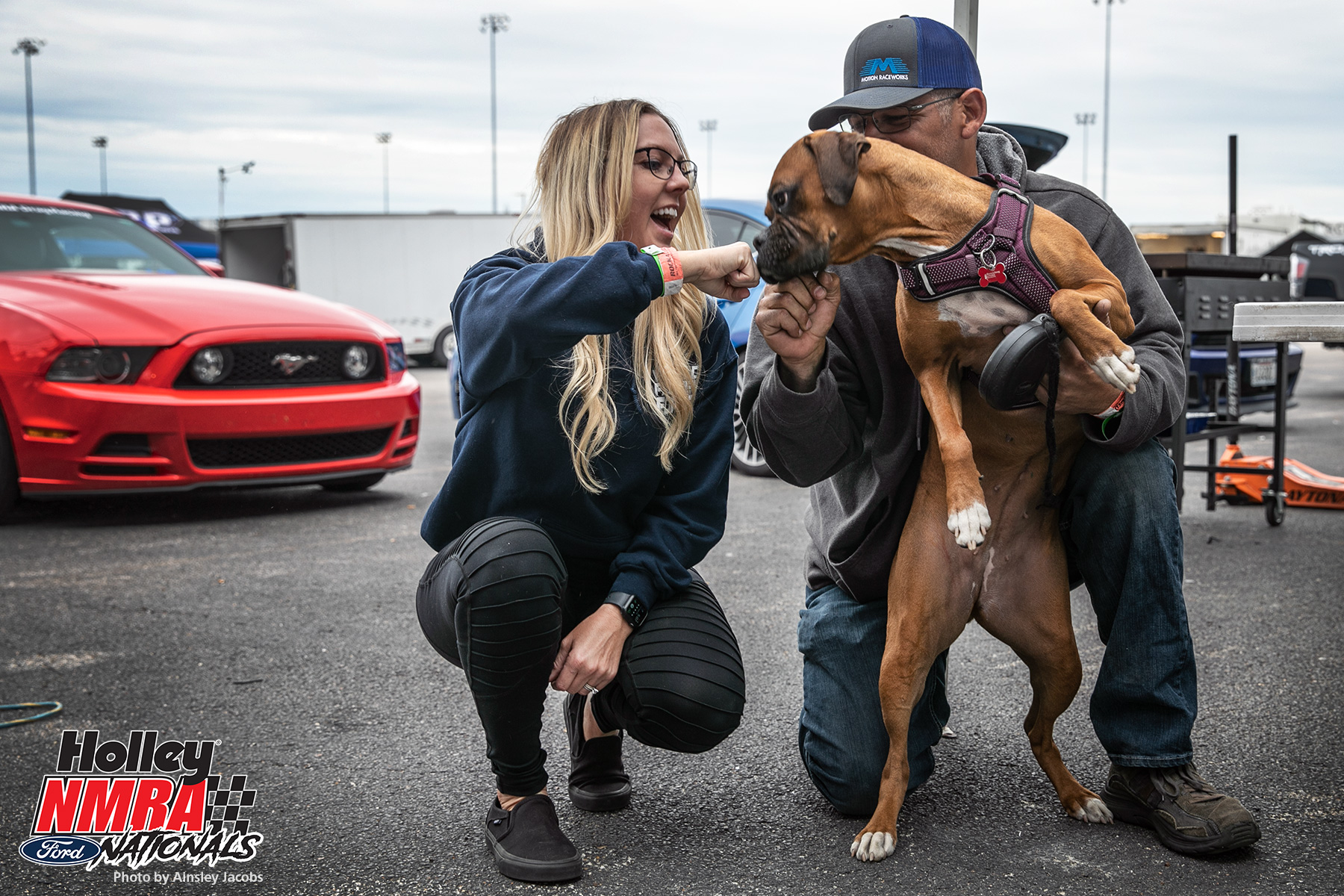 *fistbump* Becki and Joe Cram, and sweet Georgia, have a lot to celebrate! From the wicked-quick new personal best of 4.636 at 152.21 mph that Becki ran earlier in qualifying which put her eleventh in the 26-car NMRA Edelbrock Renegade/NMCA Edelbrock Xtreme Street field to the round one win she picked up in eliminations this evening over Corey Stephens when he red lighted and she went 4.668 at 146.97 mph, Becki and her Whipple-supercharged 10 Mustang have both been in straight beast mode all day. The group has been working hard on her program for three years and it's all finally coming together. To quote Joe... we went fast, b*tches! 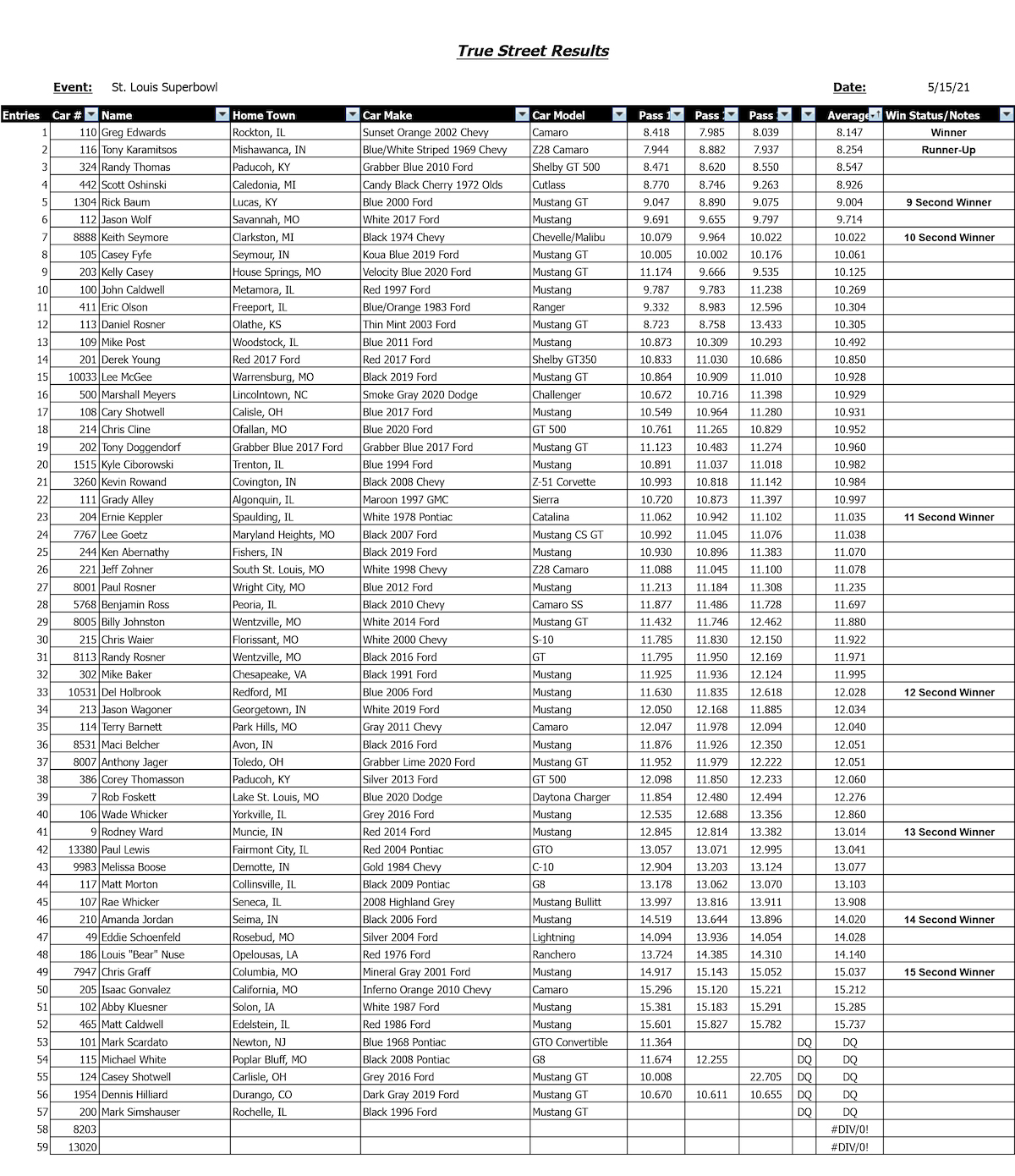