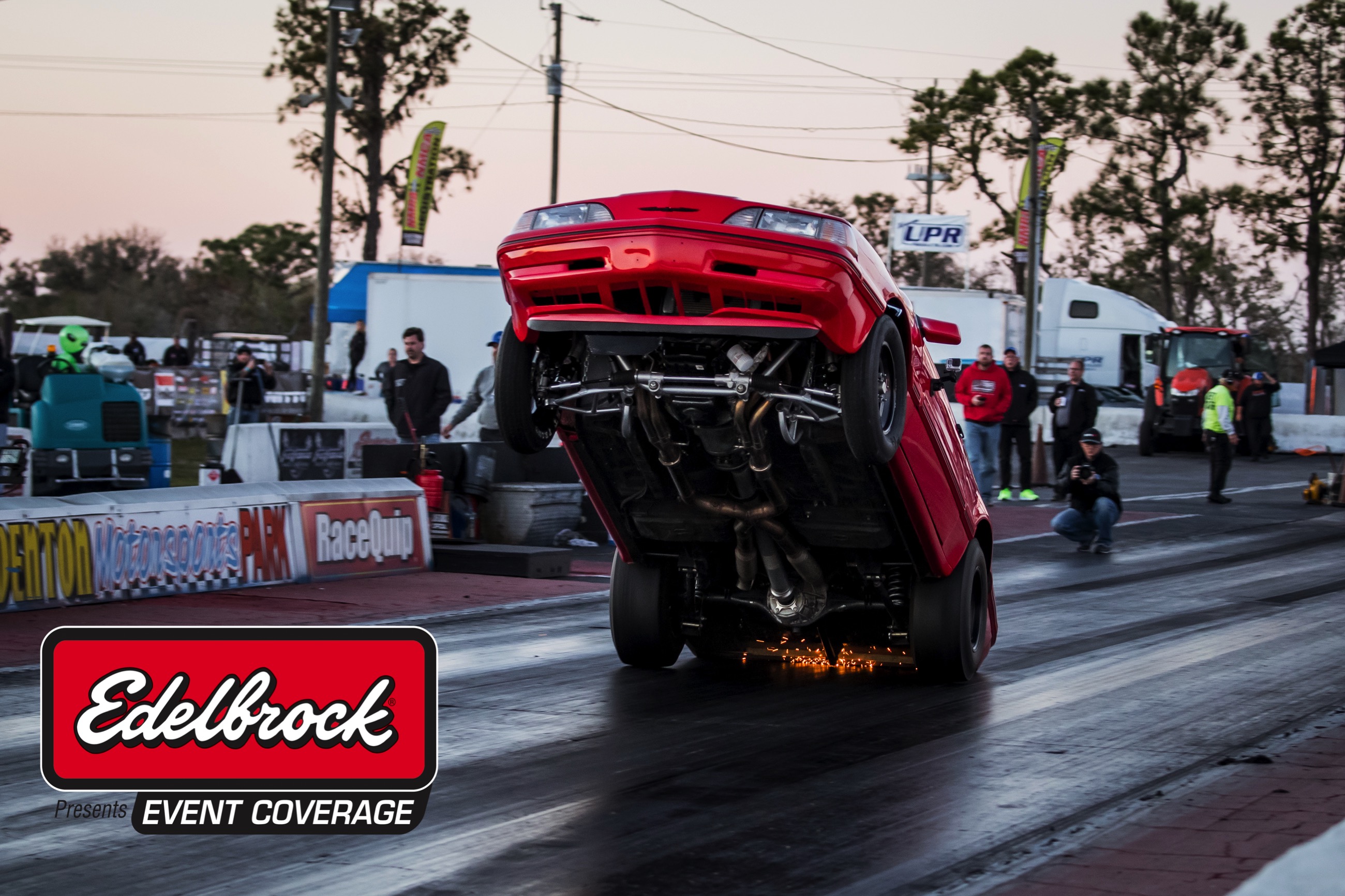 Today the action ramps up at Bradenton Motorsports Park as the 26th Annual Nitto Tire NMRA Spring Break Shootout kicks into high gear. Qualifying rolls into eliminations and the massive True Street competition goes down. Plus there are a number of special events within the show today, including a match-race between Vaughn Gittin Jr. and his teammate Chelsea Denofa in their competition drift Mustang RTRs. Also a grudge race between local racer Sai Li and Street Outlaws star, Boosted GT, runs during the NMRA After-Hours, which also features the Florida No Time 28/275 Shootout and a Street Car Shootout, presented by Innovative Racecraft and Li Tuning and Racing. So keep checking this page for all the updates from the track. 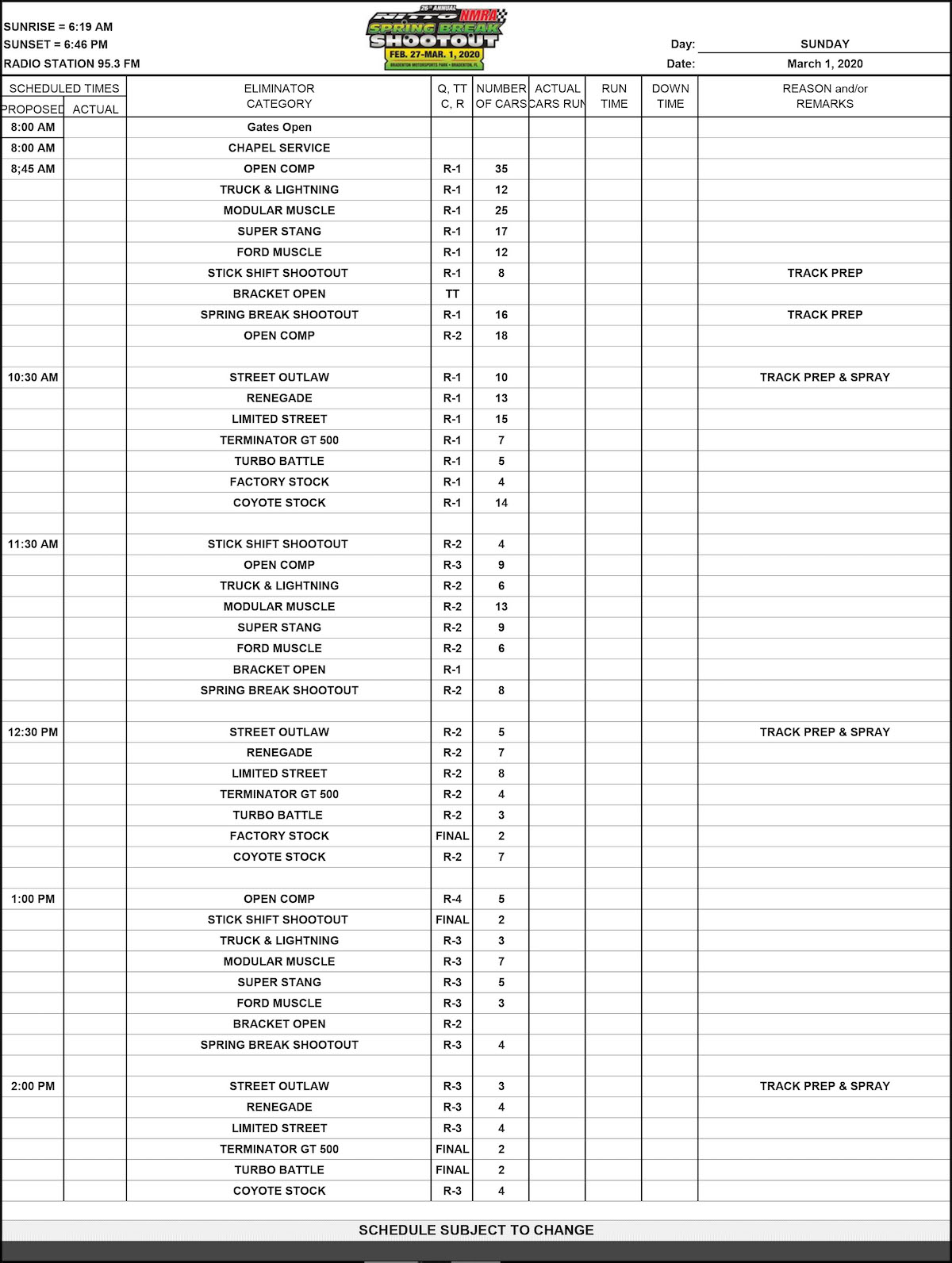 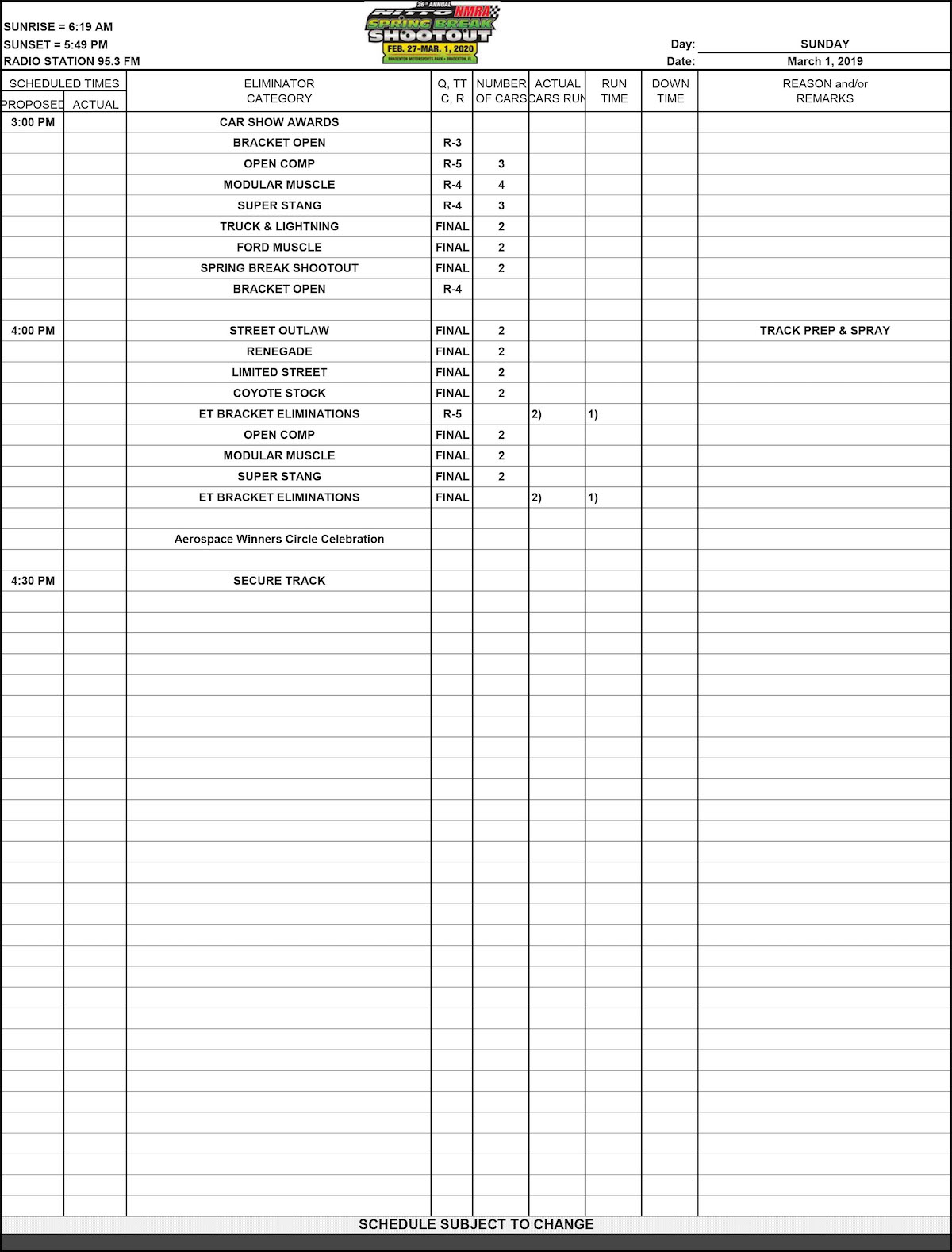 After the True Street competition concluded, racers, crew, and sponsors convened at the TREMEC Racer Appreciation Party to enjoy pizza and beer while learning the event's winners, as well as the names of the racers making the cut for the TREMEC Stick Shift Shootout class that will run tomorrow.

Running 10.97 at 123.5 mph in the Fox Mustang once owned by his dad, Mike Baker jokes that The only thing you have to cut up to run like this is your credit cards after you are done. He had good success in QA1 True Street with the stock pushrod engine, but the True Street stalwart has run a simple Gen 1 Coyote swap for the last three years. The car puts down the modern power via a UPR Products suspension.

If you seek must-have parts for your project, there is a robust swap meet at the 26th Annual Nitto Tire NMRA Spring Break Shootout. From engine and interior bits to wheels and tires, there are plenty of cool parts up for sale at Bradenton Motorsports Park.

Looking to improve on his 10.31 at 129 run Friday, Shane Stymiest and crew were swapping gears before the next round of Richmond Gear Factory Stock. They say necessity is the mother of invention, and it is definitely clever to use the wheel and axle as a stable platform on which to torque the new gears to the spool.

After working his way up the QA1 True Street ladder with multiple category wins, Kevin McCotter made the leap to JDM Engineering Limited Street with a naturally aspirated combo. Powered by a 461ci small-block wearing Edelbrock Victor induction, this car was a different color and much heavier 14 weeks ago. Thus far the Fox Mustang has run as quick as 8.90s at the 26th Annual Nitto Tire NMRA Spring Break Shootout. Better yet, he says the car still has the goods to survive the True Street Cruise.

In the first time trial clash between teammates, it was Vaughn Gittin Jr.'s Mustang RTR easily besting Chelsea Denofa's machine thanks to a 9.70 at 149 mph rip. The duo are matching-racing their competition-spec Formula Drift machines on the drag strip for the first time at the 26th Annual Nitto Tire NMRA Spring Break Shootout at Bradenton Motorsports Park.

Working on licensing passes at the 26th Annual Nitto Tire NMRA Spring Break Shootout, Scott Foster is dialing in the new combo under the hood of his real 1979 Mustang Indy Pace Car. Running a 351 topped by Trick Flow heads and squeezed with a custom nitrous system, the three-year-in-the-making project looks to go rounds in JDM Engineering Limited Street this weekend at Bradenton Motorsports Park.

You have to love seeing the Fox Mustang still resonating with someone born long after their production ended. Blake McLane's dad always wanted a Fox in high school, but never got one. So when he set out to build one with Blake, they found this 1991 GT as a faded red beater. In 2 1/2 years they transformed it into the clean street car revved up with a cam, headers, and underdrive pulleys we spotted in the UPR Products car show at the 26th Annual Nitto Tire NMRA Spring Break Shootout.

Other Fords are running crazy-quick times at the 26th Annual Nitto Tire NMRA Spring Break Shootout. Marcelino Sotolongo's 2017 Fusion Sport ripped off an 11.76 at 118.93 mph in QA1 True Street, which he says is the quickest run yet by an EcoBoost Fusion. Prepped by MAK Performance, Sotolongo's 500-horsepower daily driver runs upgraded turbos, a Steeda CAI, a Levels intercooler, and a Tuning by James E40 calibration.

Topping the charts in JDM Engineering Limited Street on Friday, Jason Davis piloted his 2015 Mustang GT to an 8.44 at 161.61 mph. The car is running a built Coyote engine boosted by one of Blow-By Racing's off-the-shelf turbo kits, which utilizes stock exhaust manifolds, and tuning. The team moved weight around and went back to last year's suspension setting to find the hook, which the car plants with a stock differential and D.S.S. 800-horsepower halfshafts. 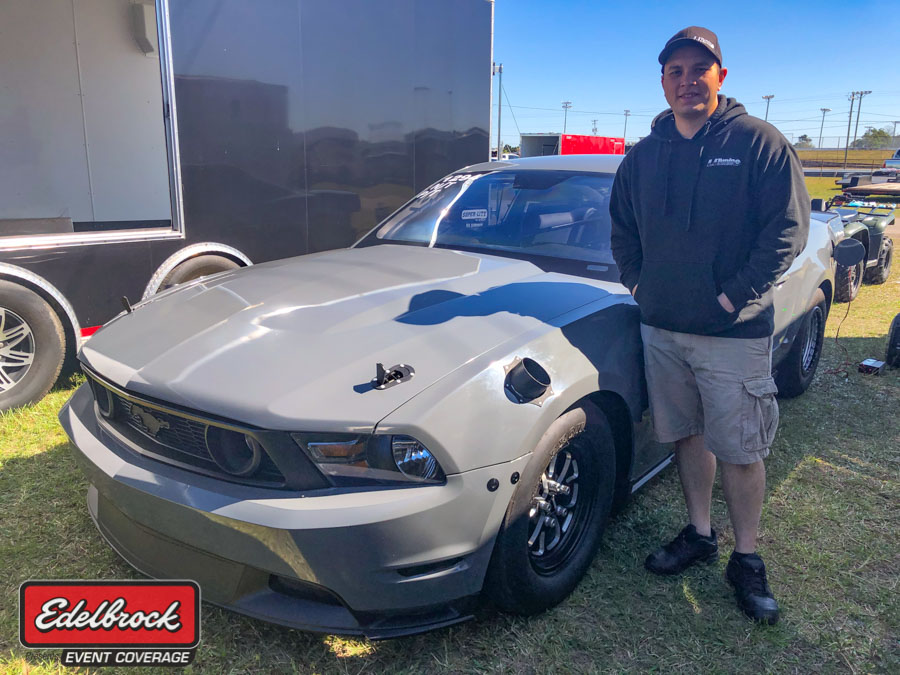 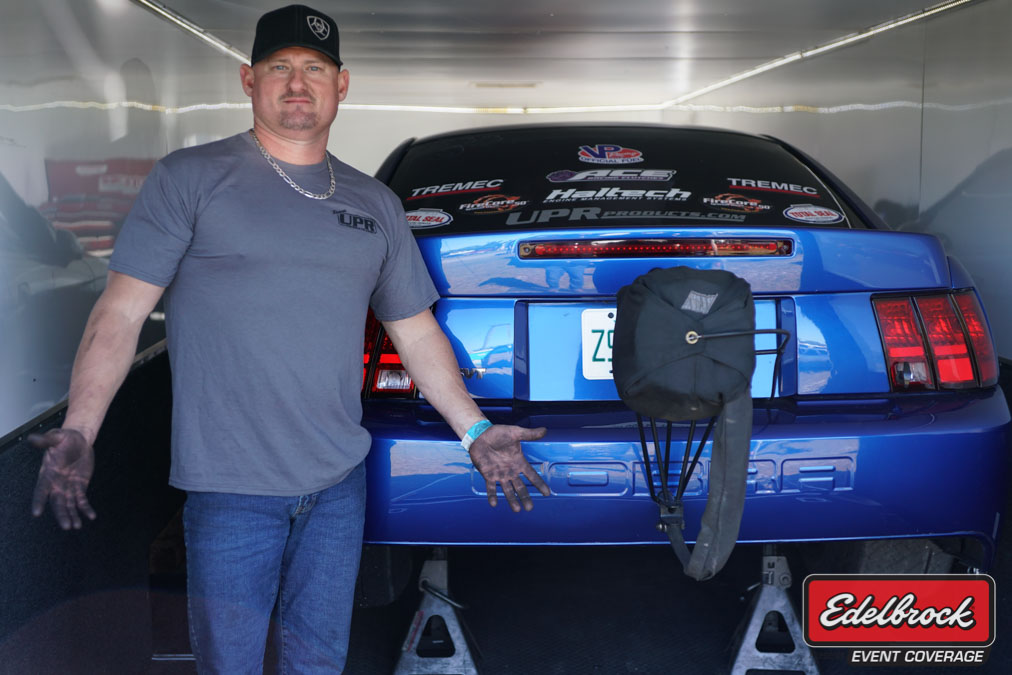 A winner of the TREMEC Transmissions Stick Shift Shootout a number of times, Anthony Heard hurt the transmission in his 8-second-capable, Sonic Blue turbo Mustang during yesterday's test session. Luckily for him, his friend Brent Nelson brought him his spare T56 Magnum so he could finish out weekend in QA1 True Street, and hopefully the Stick Shift Shootout. 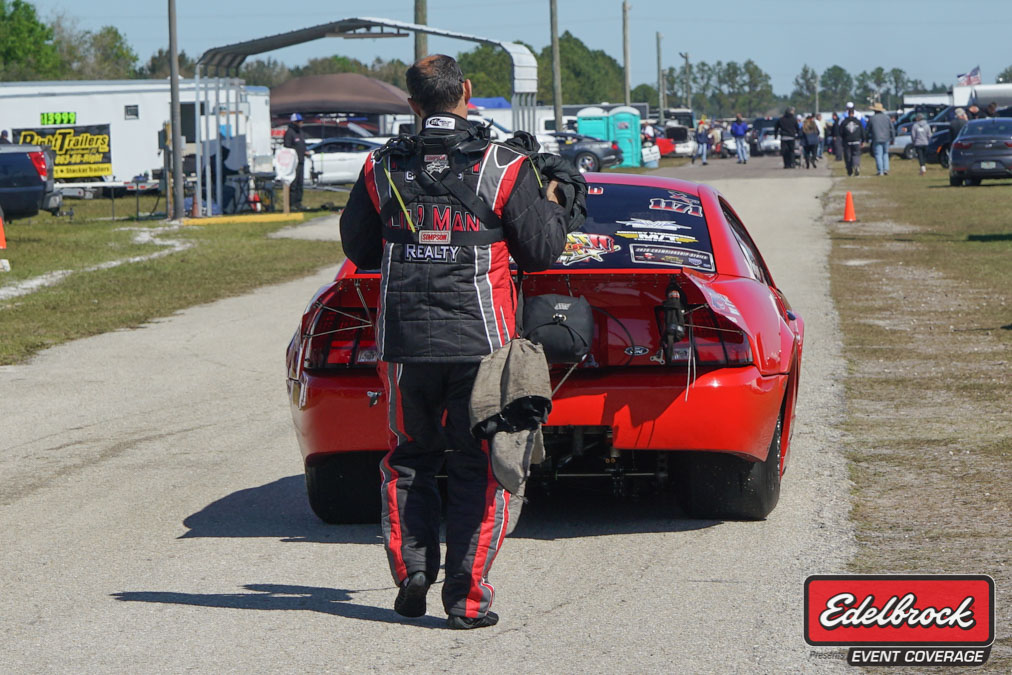 Manny Buginga currently sits at the top of VP Racing Madditives Street Outlaw qualifying with a 4.24, but he's gunning for the teens and might just get that shot in the final round of qualifying today. 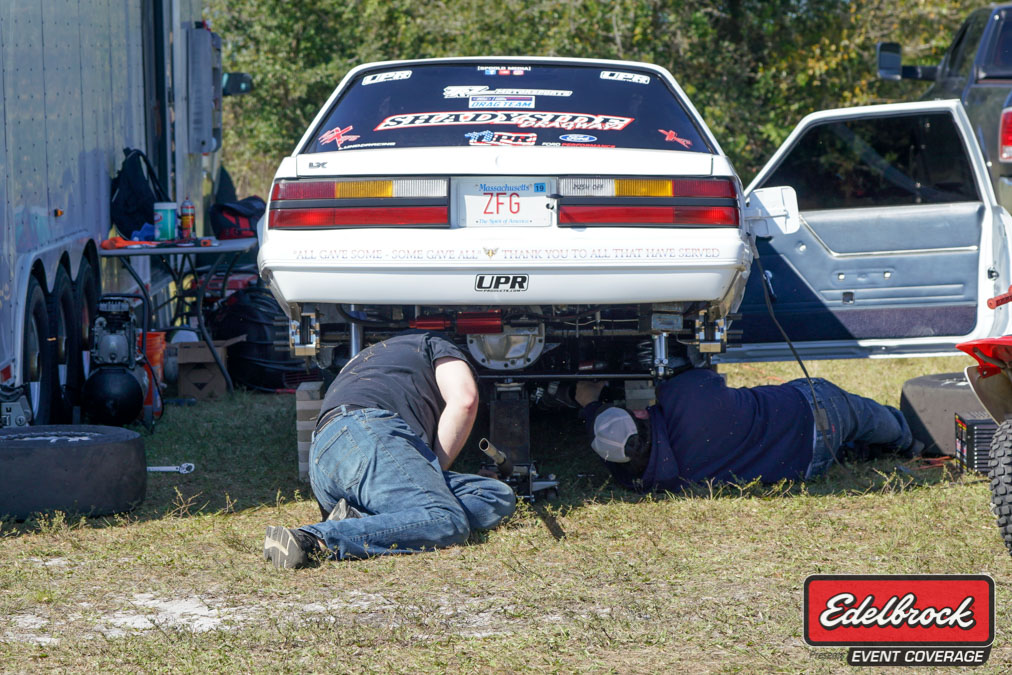 G-Force Racing Transmissions Coyote Stock racer Torrey Brown was busy making an adjustment to the pinion angle of his Fox-Body Mustang for the next round of qualifying. 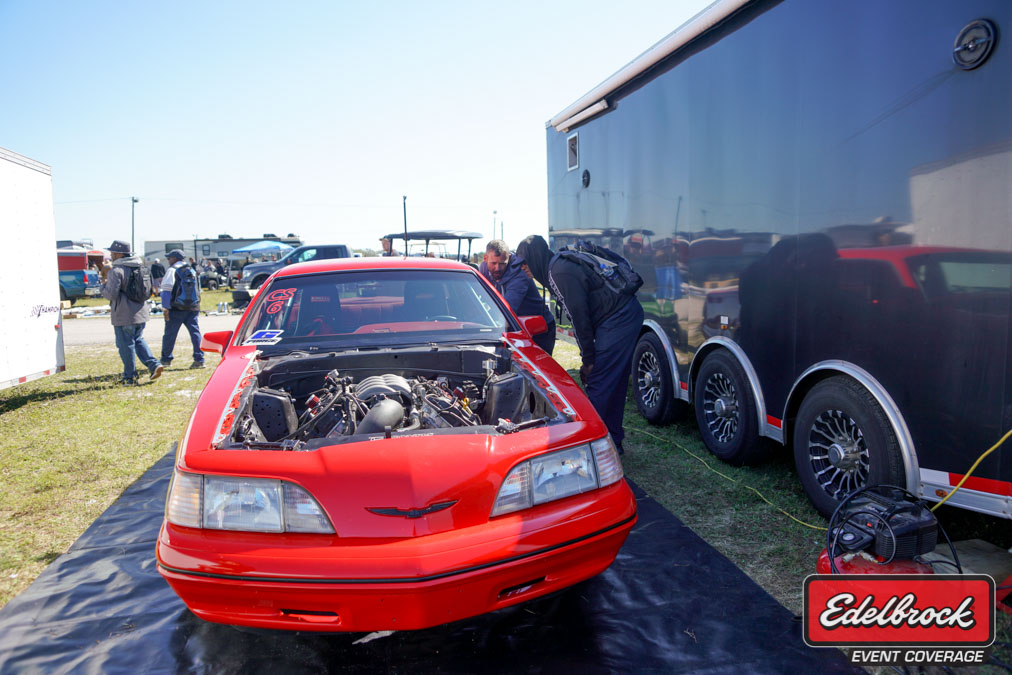 G-Force Racing Transmissions Coyote Stock racer Chad Stephens was more than ready to bail out of his home in Canada and come to sunny Florida for the weather and the good friends and camaraderie at the track. His Thunderbird has been standing up on its tail feathers all weekend as he gets used to running the car on the new taller tires, but he has since been able to tame it down. 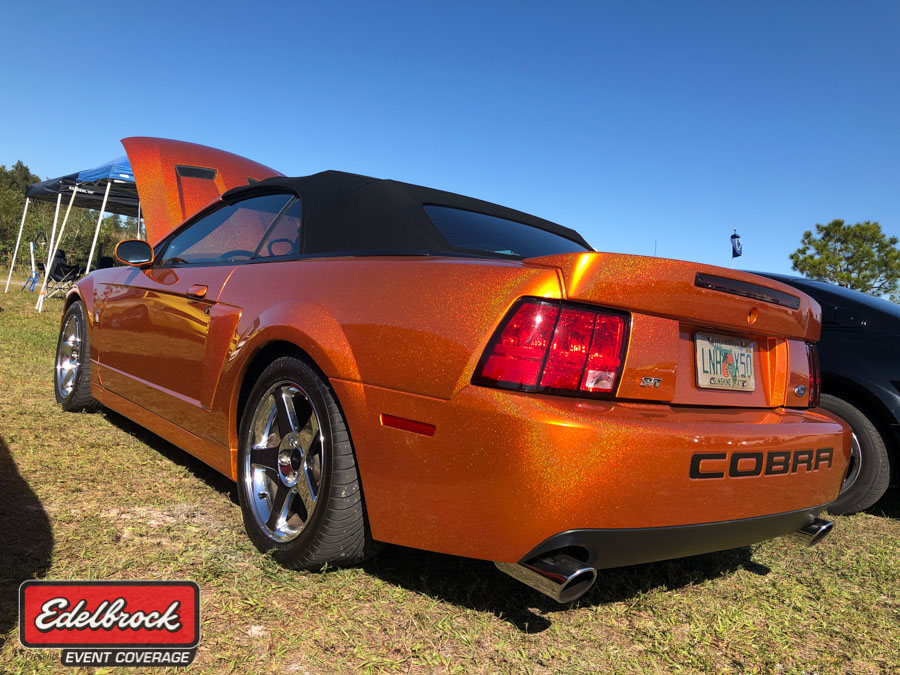 The UPR Products Car Show is slammed this weekend with all sorts of late-model and vintage rides. This Cobra convertible should get the award for most vibrant paint. 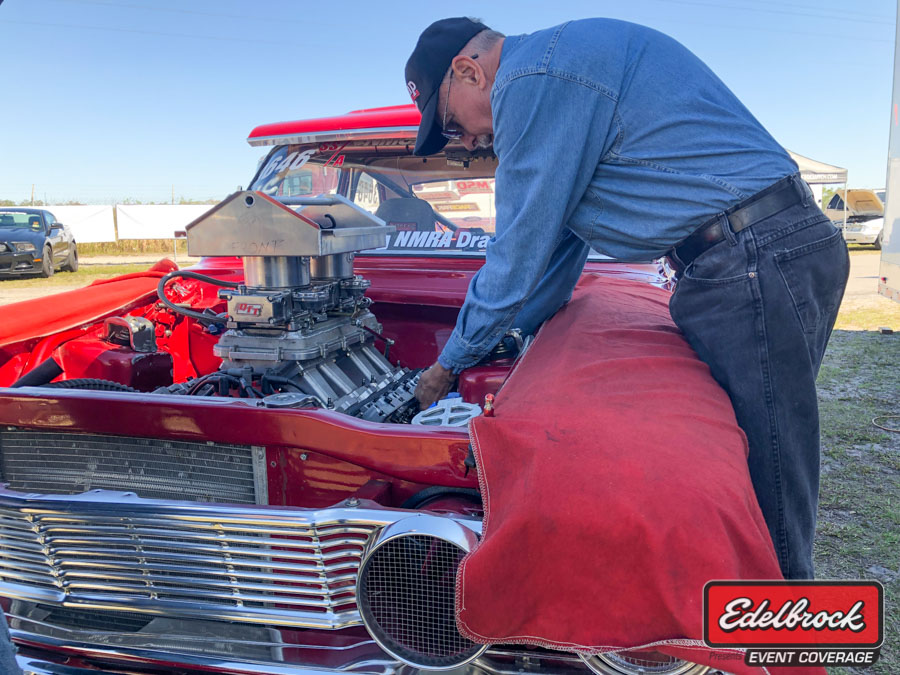 Kurt Neighbor's beautiful '64 Ford Thunderbolt is a mean machine with its 4-speed manual transmission and FE engine. Neighbor missed a gear change on a qualifying run earlier today, and tagged the rev limiter, so he was checking out the valve train to make sure everything was ready for ARP Open Comp eliminations. 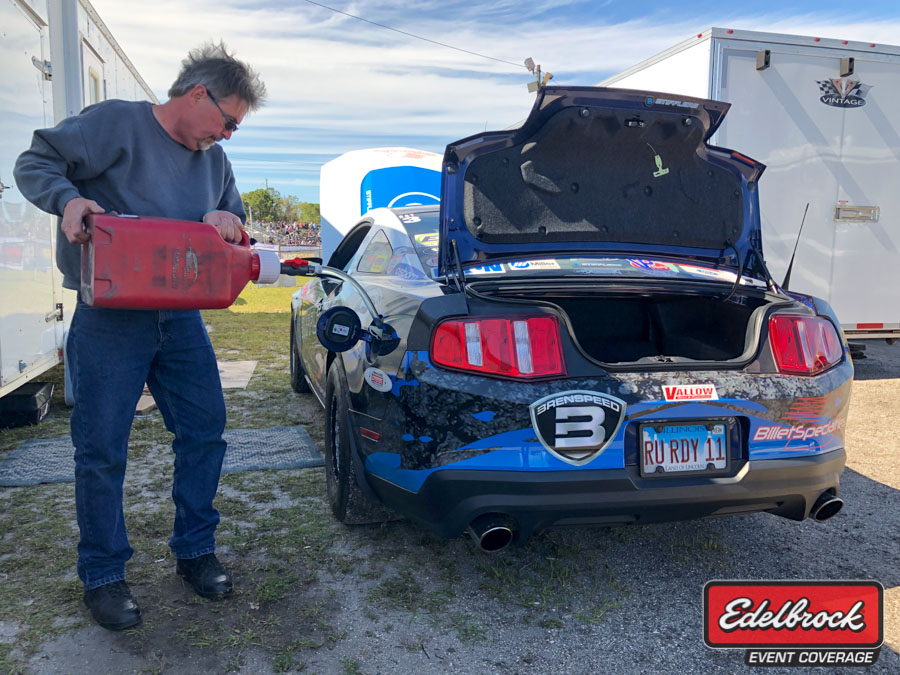 ROUSH Performance Super Stang champion Marvin Knack was filling up his championship-winning Mustang with some high-quality VP Racing Fuels 93-octane gasoline before the last qualifying session of the event. 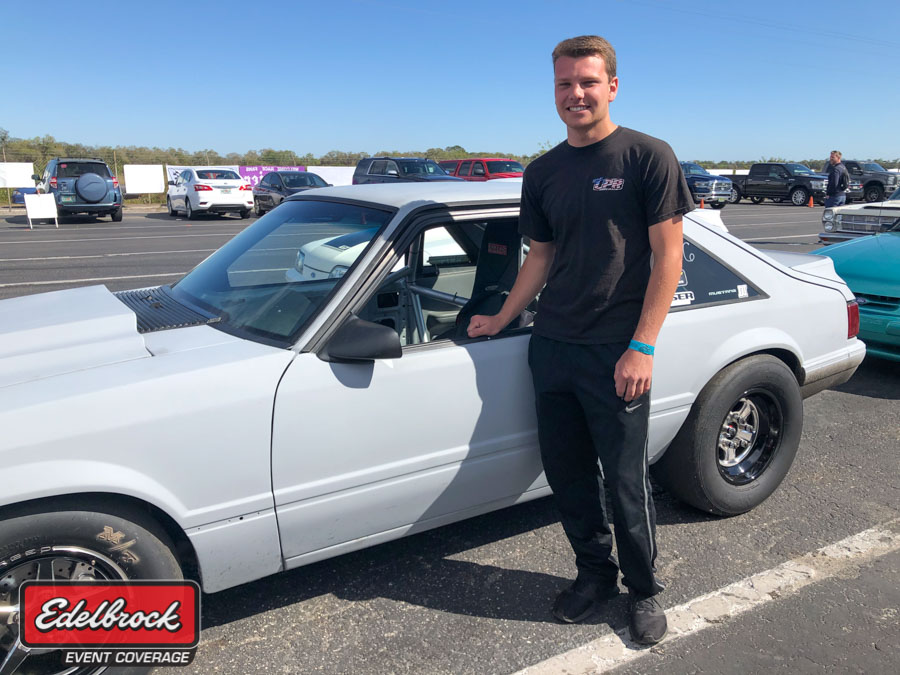 Gage Burch of Palmetto, Florida, is a bracket racing fiend and is here at Bradenton Motorsports Park to decimate the bracket class. With a bit of help from Mickey Thompson Performance Tires & Wheels, Moser Engineering, and FTI Performance, Burch became the reigning pro and sportsman track champion at this track, and last year won the $525,000 SFG race. He's alway racing various cars in various classes, but this weekend he's driving his 1990 Mustang powered by a 364ci small-block Ford.   Here's the Saturday schedule for the 26th Annual Nitto Tire NMRA Spring Break Shoot Out at Bradenton Motorsports Park... 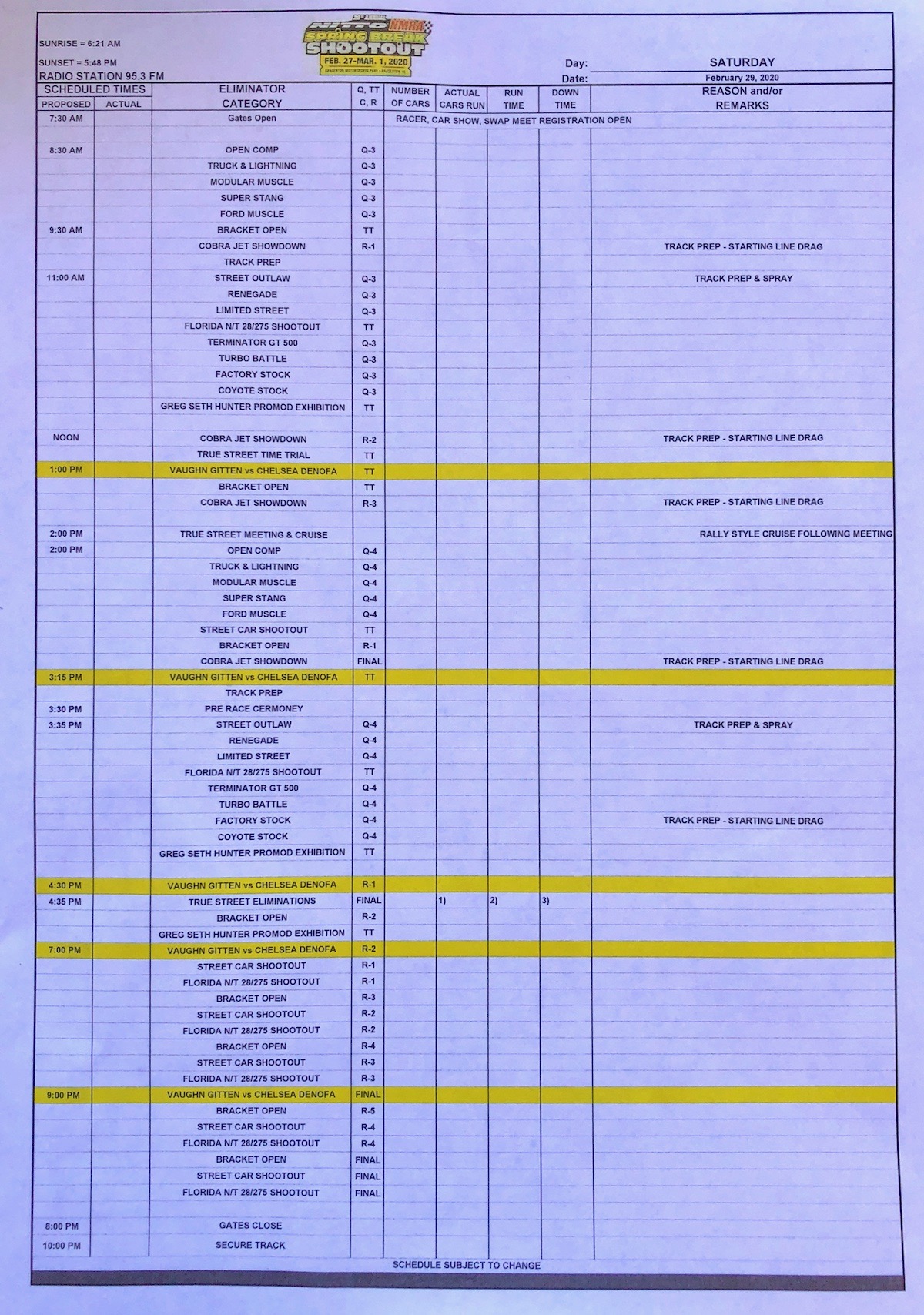