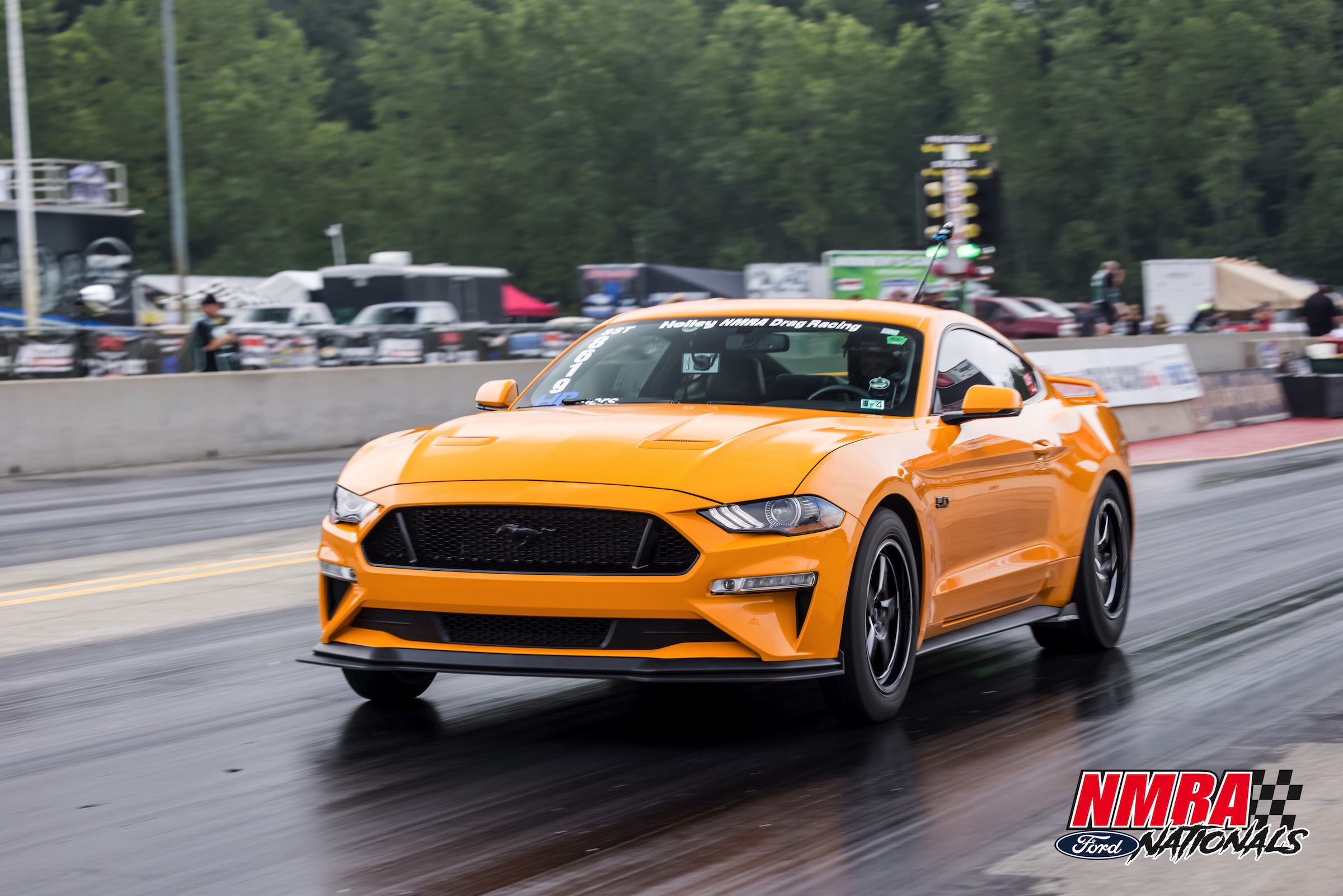 The stakes get much higher today at the Inaugural Arrington Performance NMRA/NMCA Power Festival Presented by Force Engineering. Qualifying winds down and eliminations get underway in the heads-up and index classes, while the TorqStorm Superchargers / QA1 True Street and Dodge // Mopar Hemi Shootout presented by Redline Oil racers will decide the winners today. Of those Hemi racers, the top-performing machines will earn a slot in tomorrow's Arrington Performance Hemi Quick 8 presented by Redline Oil.

As an added bonus, the day features major final rounds that should loom large in the season points chase. With the NMRA/NMCA Super Bowl of Street-Legal Drag Racing truncated by weather back in may, several final rounds from that event were pushed to this weekend. As such, Dart NA 10.5, Holley EFI Factory Super Cars, VP Racing Madditives/Mickey Thompson Street Outlaw, and VP Racing Lubricants Xtreme Pro Mod champions from that event will head for the Winner's Circle today.

For all the action from Martin, Michigan, check back right here and stay tuned to our social media channels. GET UP TO DATE QUALIFYING RESULTS HERE

Here's a look at how all the racing action will unfold today at the Inaugural Arrington Performance NMRA/NMCA Power Festival Presented by Force Engineering. 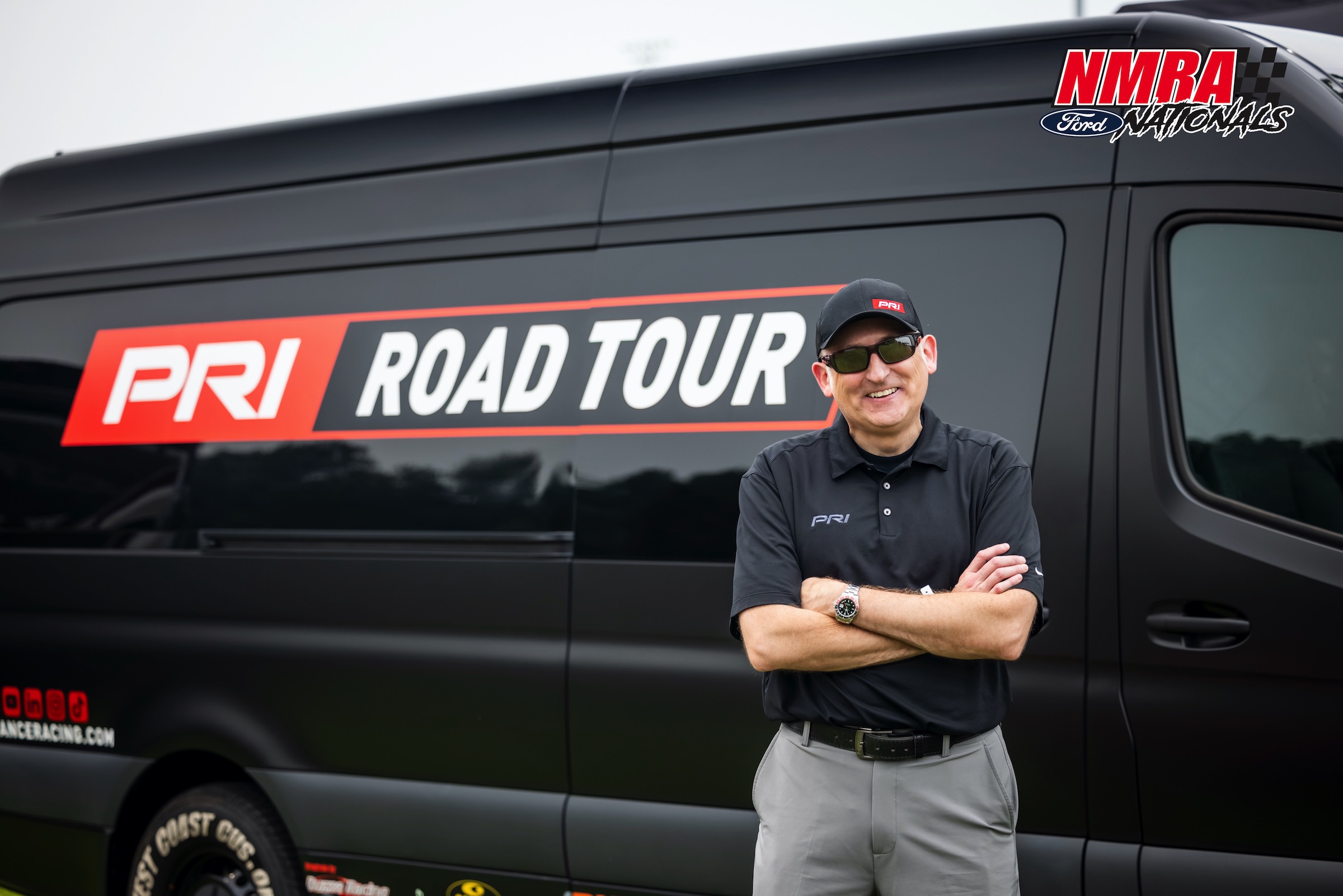 President of PRI, Dr. Jamie Meyer visited the Inaugural Arrington Performance NMRA/NMCA Power Festival Presented by Force Engineering as part of the PRI Road Tour, which was born out of the pandemic last year to share the spirit of the PRI Show during difficult times. This year the tour transitioned from visiting shops and manufacturers to visiting racing events. This year we want to take the world racing. So how do we elevate all of these events that are making a comeback and are so well attended this year We're bringing the world's best content creators out to racetracks all around the Midwest and all around the country trying to tell the story of racing and what a great pastime and a great sport it is. The tour is ongoing this year through the trade show in December, and this weekend's NMRA/NMCA event fits right in. It's one of our key stops. We're here covering racing, giving back to the racing community, and delivering great coverage. We are talking about the PRI Show and talking about why membership is so important as we bring the racing community together, he added. We are also emphasizing how important passing the RPM Act is to protect the right to convert these street cars to race cars. Obviously, if you look at the NMRA and NMCA lineup, 90 to 95 percent of these cars are street cars, or were street cars that were converted into race cars.

Longtime Michigan resident Roxanne Shepard moved out of the state to follow her career, but she returned to the Wolverine State to race at US 131 Motorsports Park. These days she and her husband, Barry, live in Kentucky just a stone's throw from fellow racer Don Bowles. That makes puts the longtime Exedy Racing Clutch Modular Muscle racer in a more central spot to hit more stops on the series schedule. This weekend at the Inaugural Arrington Performance NMRA/NMCA Power Festival Presented by Force Engineering the car started off running well, but as the humidity picked up it slowed down into the high-9-second range.

We caught up with Mike Motyka as he received a little help from his friends. Though generous with their time, his pals offered no warranty for the moral support. They were assisting with distributor removal, as Mike didn't need the distributor's centrifugal advance. With it extracted, they modified the distributor so it could be locked at a consistent setting. With this change, he could set the timing right where he needs it to compete in Detroit Locker Truck & Lightning.

Fresh off a long, but successful run with his Cobra Jet Stocker at the NHRA SPORTSnationals, Holley's Robin Lawrence brought his new motorhome, trailer, and hard-earned Wally to the Inaugural Arrington Performance NMRA/NMCA Power Festival Presented by Force Engineering. After five days of racing in Ohio, he is not running the car this weekend, rather he is focused on supporting NMRA and NMCA racers this weekend. However, you might just see it in competition at the Watson Racing Cobra Jet Showdown at the next stop on the NMCA Muscle Car Nationals tour at Summit Motorsports Park in Norwalk, Ohio, on August 26-29.

HP Tuners Super Stang regular Andy Ransford made a few changes leading into the race this weekend at US 131 Motorsports Park. Besides replacing some dead spark plugs, he swapped to another gear ratio, added Strange axles, and began upgrading the suspension with UPR Products gear. He says it was about time for a few upgrades for his trusty 2006 Mustang, which was basically stock. It is running high-13s so far this weekend.

As the high-flying action in G-Force Racing Transmissions Coyote Stock calmed on Friday night, the entire class gathered in Torrey Browne's pit. Just as all racers deftly manage the shifter and clutch in the class, the host balanced working the grill and dunking wings (the hot Buffalo examples were really tasty) and fries into boiling oil. He hosted a feast for his fellow racers, which also served as an early birthday party for driver Kevin McMullin. As competitive as this class is on the track the camaraderie off-track is just as strong. 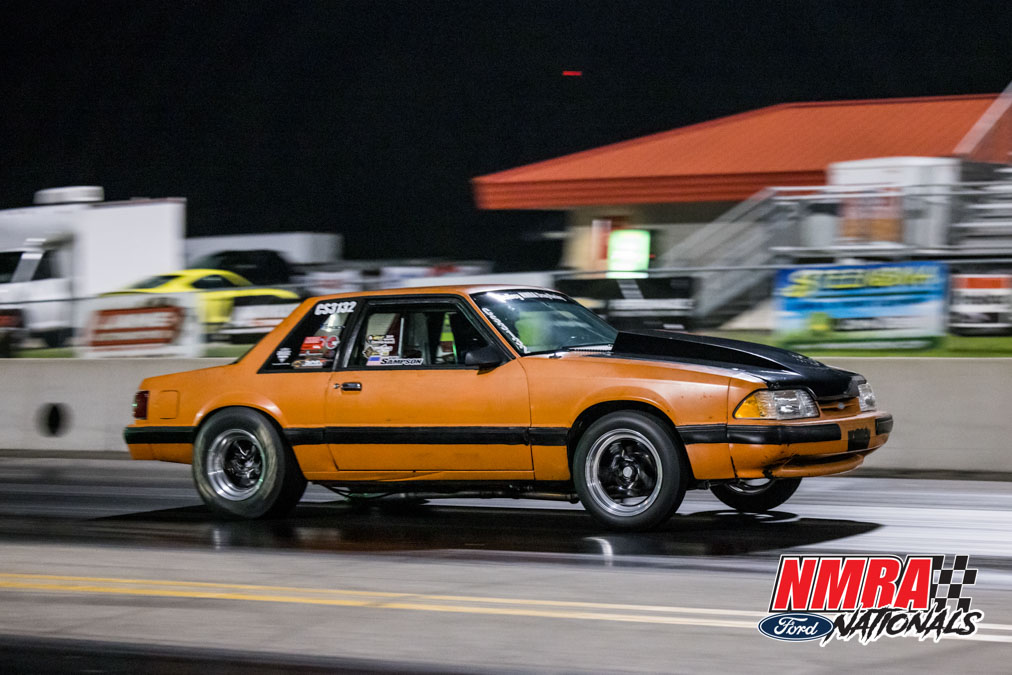 Kenny Sampson is a traveling man, as the G-Force Racing Transmissions Coyote Stock racer hails from Washington state and made the 45-hour journey to compete this weekend at US 131 Motorsports Park. Sampson traded a set of GM LSA cylinder heads for the Fox-body chassis, and recently upgraded the engine to a Gen III Coyote 5.0-liter, backed by a G-Force G101A transmission. His Mustang has been 10.003 with a Gen II engine, and he's working hard to get the Gen III running at the head of the pack.

Kent Nine has been on the struggle bus for a few races, and confessed to really only having two clean passes on the car all year, but he says the car is finally coming around. His 8.43 qualifying hit in JDM Engineering Limited Street is the result of a lot of work to get the car dialed in. Nine uses a Vortech V-7 JT-Trim with an RPM Transmissions Turbo 400 with a new Circle D converter. Since arriving at US131 Motorsports Park, the only work needing done between passes is routine maintenance.

Shiftin Shane Stymiest was busy getting a little heat in his G-Force Engineering Coyote Stock ride when we came by for a quick visit. He's owned this car for a while now, but the Norwalk event was the car's first Coyote Stock race. The first race was beneficial to the point that he didn't have to make any big changes to the car. I'm just trying to figure out what it likes, says the ping-pong hack. After 2nd round of qualifying Stymiest sits in the 2nd spot with a 9.91 at 135 mph behind Charlie Booze.

Following in the footsteps of his family name, Del Holbrook is at the wheel of this S550 Mustang in ARP/Magnafuel Open Comp, which started out as a body-in-white purchased from Jesse Kershaw. The car has been in the works for a couple years with the idea of putting the younger Holbrook in the seat. The engine, of course, built by Holbrook Racing Engines, features a Bryant crank, Molnar rods, Mahle pistons, Comp cams, a Cobra Jet intake, and more. The transmission is a Joel's on Joy-built Turbo 400 with an A-1 Transmissions converter and an M&M shifter. MadFab did the chassis, using Lamb struts and brakes, Watson Engineering engine mounts and fuel tank, and a 9-inch rear end. The car is certified to 6.50, so Del can grow into the car, and that it's as safe as possible. The car utilizes an Aeromotive fuel pump and regulator for fuel delivery, while American Racing Headers provides the exit for the burnt fuel. The combination is tuned using a Big Stuff Gen4, and the ultimate goal for the car, when Del is ready, is a power adder, and mid-9s. 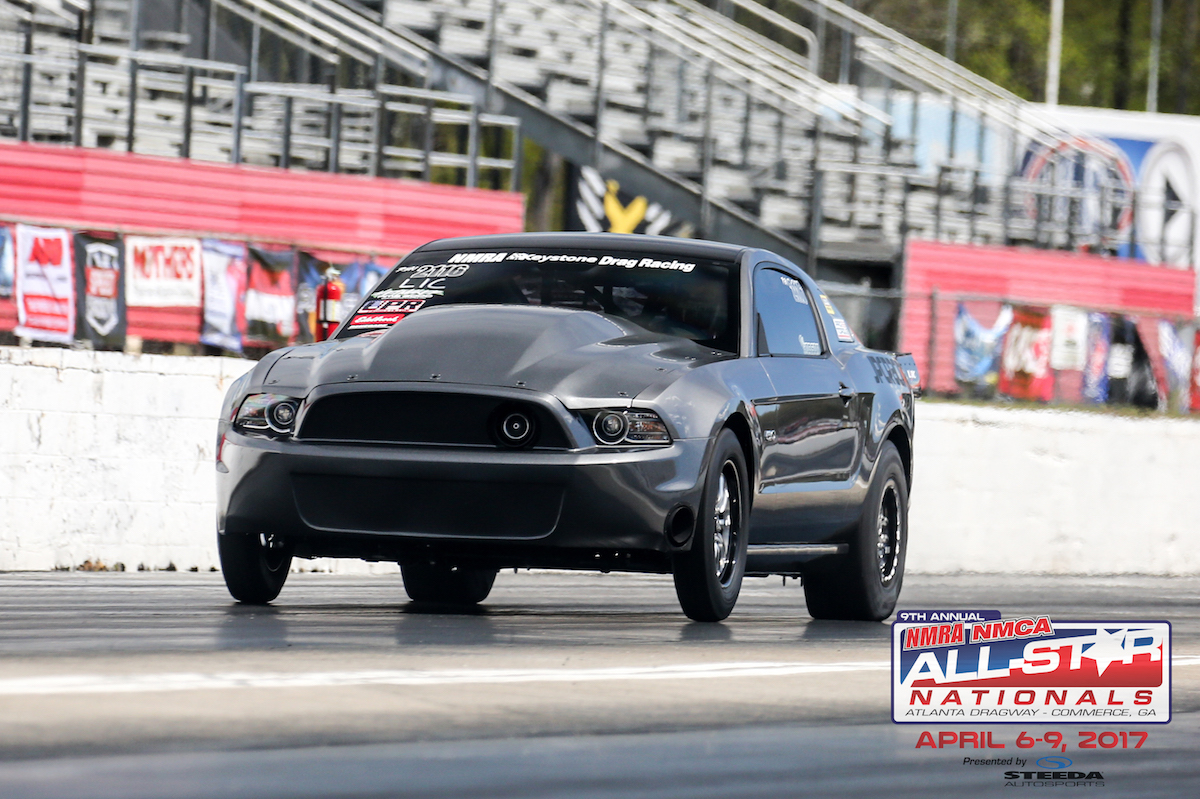 In talking to Eric Holliday, the tuner for Tony Hobson's VP Racing Madditives/Mickey Thompson Street Outlaw program, he says the car is doing okay. In testing here at US131 Motorsports Park, the car responded from a little shifting of the weight balance with a 1.07 60ft time. Hobson is currently qualified in the 3rd spot with a 4.30 at 164 mph.

Nate Stymiest's numbers are a little off since arriving at US131 Motorsports Park, so he has been busy looking at data in his G-Force Engineering Coyote Stock ride. He has been chasing a couple ignition issues, but he says the driver needs a tune-up, as well.

A standout in the UPR Products Car Show is this mean and clean 1989 Mustang GT owned and built by Chad Scheerhorn. Inspired by a ride in turbo-LS record holder Jon Capizzi's ride, this Fox is powered by a 360-cube engine based on a Dart Iron Eagle block, which is topped by a pair of CNC-ported Dart Pro 1 heads and a Trick Flow Box R intake manifold. Currently, it puts down 700 horsepower to the wheels, but with more tuning, he hopes it will enter the magical four-digit zone.

Charlie Booze is piloting the G-Force Transmissions Coyote Stock ride owned by Scott Milhimes. Booze and Milhimes have been working on this car since January, but hurt a timing chain earlier in the year, which put the car's progress in limbo until a new engine could be located and installed. The Tuesday after the Norwalk race, all involved had a meeting and came up with a plan for the car. To implement that plan, they tested the car every Friday night between Norwalk and this weekend. The testing obviously proved worth it since Booze qualified the car in the top spot, which we're sure was part of the plan.
Arrington Performance
,
Coverage
,
Event
,
Martin
,
Michigan
,
NMCA
,
Power Festival
,
Race