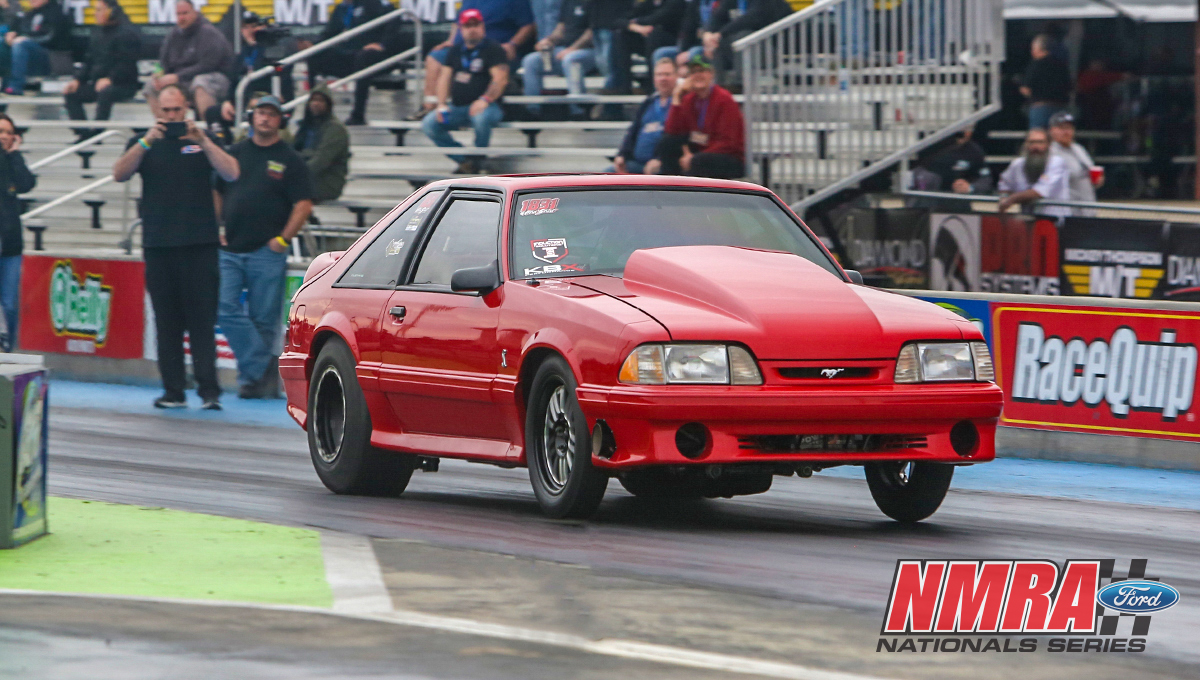 By Ainsley Jacobs After traveling as a spectator to the NMRA races in Florida and Kentucky for years, Scott Wayne is ready to jump in mid-season with an Edelbrock Renegade ride of his own. Wayne, who works as a firefighter for Baltimore County in Maryland by day, also spent years traveling with former JPC Racing employee Ronnie Reynolds while Reynolds was racing his own car or helping JPC's owner Justin Burcham with his. I really enjoyed being in that environment and the friendships I built with guys like Michael Washington, John Kauderer, Eric Holliday, and others over the years made me realize how much fun it would be to go racing, said Wayne, whose 93 Ford Mustang Cobra suddenly fit the NMRA Edelbrock class once it was changed to an eighth-mile format. Getting his feet wet on the street racing scene years ago, Wayne has owned many Mustangs over the years. In 2016, he purchased his current Fox body as an unfinished rolling chassis project. Originally, it started out as a street/strip car but before we were finished, it had snowballed, laughed Wayne, who sent the original Cobra to 1320 Fabrication in Baltimore to have its 8-point roll cage cut out and replaced with an SFI 25.3 certified one instead. He had ultimately decided to go Ultra Street racing with a side of Edelbrock Renegade. Adam Humm at JPC was tasked with building the car's 4.6L 4-valve Modular motor, which was bored .20 over. Upgraded pistons, aluminum rods, and custom-ground Bullet turbo cams fill the 284 ci engine, while C heads from a 2004 SVT Cobra were ported by Livernois Motorsports and bolted on to the block. An Aeromotive mechanical fuel pump and Fuel Injector Clinic 2,150 cc injectors, all supplied and serviced by Ryan Hecox at Injector Maintenance and Service, feed the hungry turbocharged Mod motor. The class-legal 76mm turbocharger was sourced from Precision Turbo & Engine, although Wayne opted to keep a factory 04 Cobra intercooler in play instead of an aftermarket unit so that he can take advantage of a weight break in a local class. Putting the power to the ground is a Proformance Racing Transmissions-built Powerglide gearbox coupled with a potent ProTorque Gen X converter. We're trying to get the ball rolling with all the good parts, Wayne added. A mixture of UPR Products and Racecraft Inc. suspension components are on board, including control arms, K-member, anti-roll bars, and more. Out back, Santhuff coil-overs help keep the Cobra planted and the Ford 9-inch rear parties with a set of Strange axles, a Strange center section, and Strange brakes. Beadlocked Belak wheels, wrapped in Mickey Thompson rubber, add a subtle strength to the Mustang's good looks. Most everything we've done ourselves, and haven't really had a shop's assistance other than Ronnie [Reynolds], shared Wayne, who worked with Reynolds, Chris Davis, and Tommy Keeney. Wayne wrapped up the work on the Fox body early in 2018 and was able to run a few events during the season with it, including the YellowBullet.com Nationals and Lights Out 10 where he clicked off a personal best of 4.91 at 143 mph in the eighth-mile at 2,950 pounds with a 1.12-second sixty-foot. We've been slowly trying to figure out the combination, and that takes time, stated Wayne, who had to sit out for several months sorting through some issues. We made a bunch of changes after that, including going to a different gear set and moving from Ignite E95 to Ignite Red E85 fuel. Now, Wayne's determined to get back at it and has his righthand man, Reynolds, by his site. Reynolds, who acts as crew chief and tuner of the Holley Dominator EFI system, opened his own shop on June 1, 2019, Boosted Fabrication and Performance, and is ready to hit the ground running. Ronnie has been a huge asset to this build and helped with all of the welding and fabrication. He's got the tools and the experience, and it's been a good working relationship so far, added Wayne. The two men plan to attend local shootouts at Cecil County Dragway and Capital Raceway for the time being, but their real focus will be on the NMRA Edelbrock Renegade class and to make the 19th Annual NMRA Ford Motorsport Nationals at Maple Grove Raceway in Pennsylvania in late June their first official outing with the Cobra. If fate allows it, Wayne will also race at the NMRA season finale in Bowling Green, Kentucky, before preparing to go all-in for a complete 2020 season.
Aeromotive
,
Boosted Fabrication and Performance
,
Edelbrock Renegade
,
JPC Racing
,
nmra
,
Precision Turbo
,
Proformance Racing Transmissions
,
Scott Wayne
,
Turbo 4.6
,
UPR Products