Spotlight on Steve Matukas The Muscle Behind Matukas Motorsports 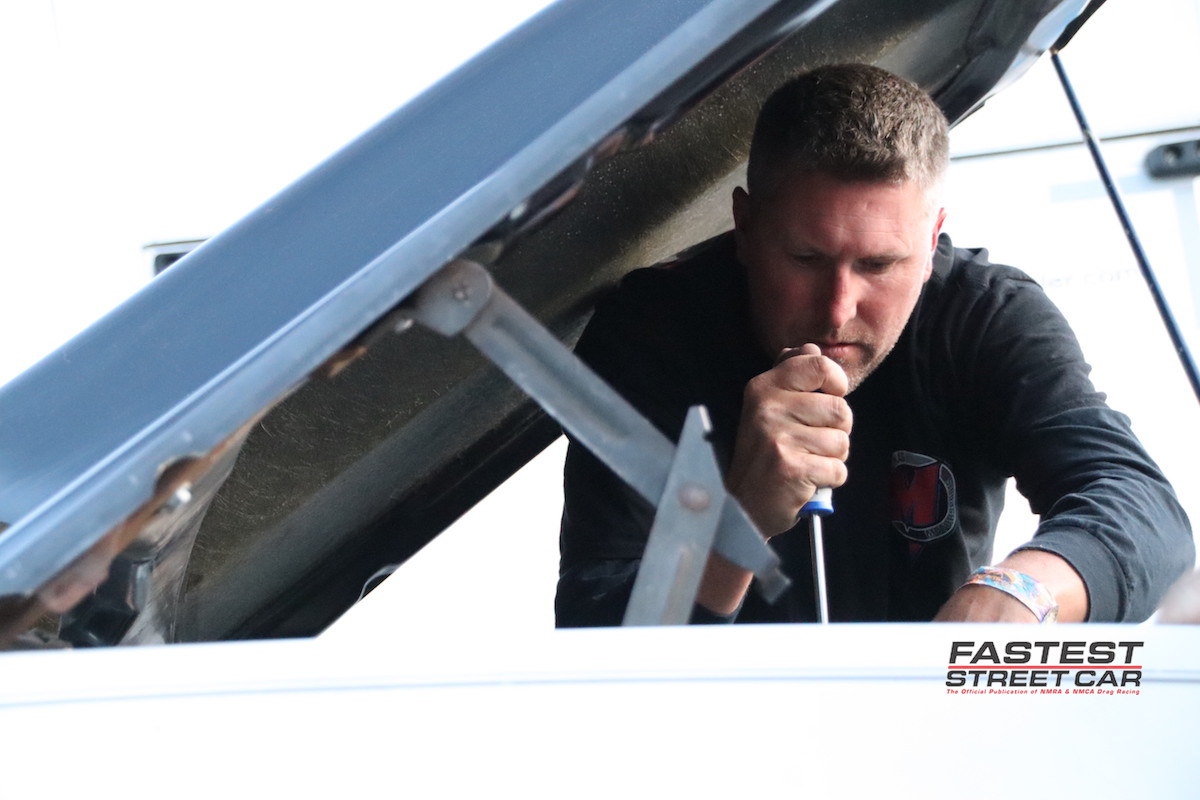 Steve Matukas was fascinated by four-wheelers when he was growing up in Southern California.

While riding his Suzuki 250 and Banshee on sand dunes around his family's home, he wanted to know what made them fast, and how he could make them even faster.

That passion for power propelled when he started going to tracks to watch his father race a 1971 Corvette in NHRA Super Stock, and before long, he also wanted to climb behind the wheel of a race car.

By the time Matukas was a senior in high school, he got that chance when his father bought a 1966 Chevy II and asked if he wanted to follow in his footsteps by competing in NHRA Super Stock. The answer was yes, and with endless excitement and enthusiasm, Matukas hauled to high 9s in the 3,000-pound car with a 327 cubic-inch Chevrolet engine and a Powerglide.

In that time, he became increasingly interested in the inner workings of cars and chassis, and specifically, how to set them up so that they were more reliable and resilient for racing.

He went on to work at two chassis and performance shops, where he honed his skills before opening his own shop, Matukas Motorsports, near Bowling Green, Kentucky.

Since then, he has worked on and built cars for hotshots like NMCA Dart NA 10.5 presented by Diamond Pistons driver John Langer, NMCA Edelbrock Xtreme Street driver Steve Cagle, reigning NMRA Edelbrock Renegade champion Joel Greathouse and many others, and he is highly regarded and respected in the industry.

When asked what motivates him to work as hard as he does, even when it's around-the-clock, he says he is inspired by racers who want to do whatever it takes to enhance and elevate their race programs, and that it means everything to him when they do well and win.

Read on for more about Matukas, who is equally inspired by his wife, Dana, and three children, Jax, Ryan and Cooper Grace. 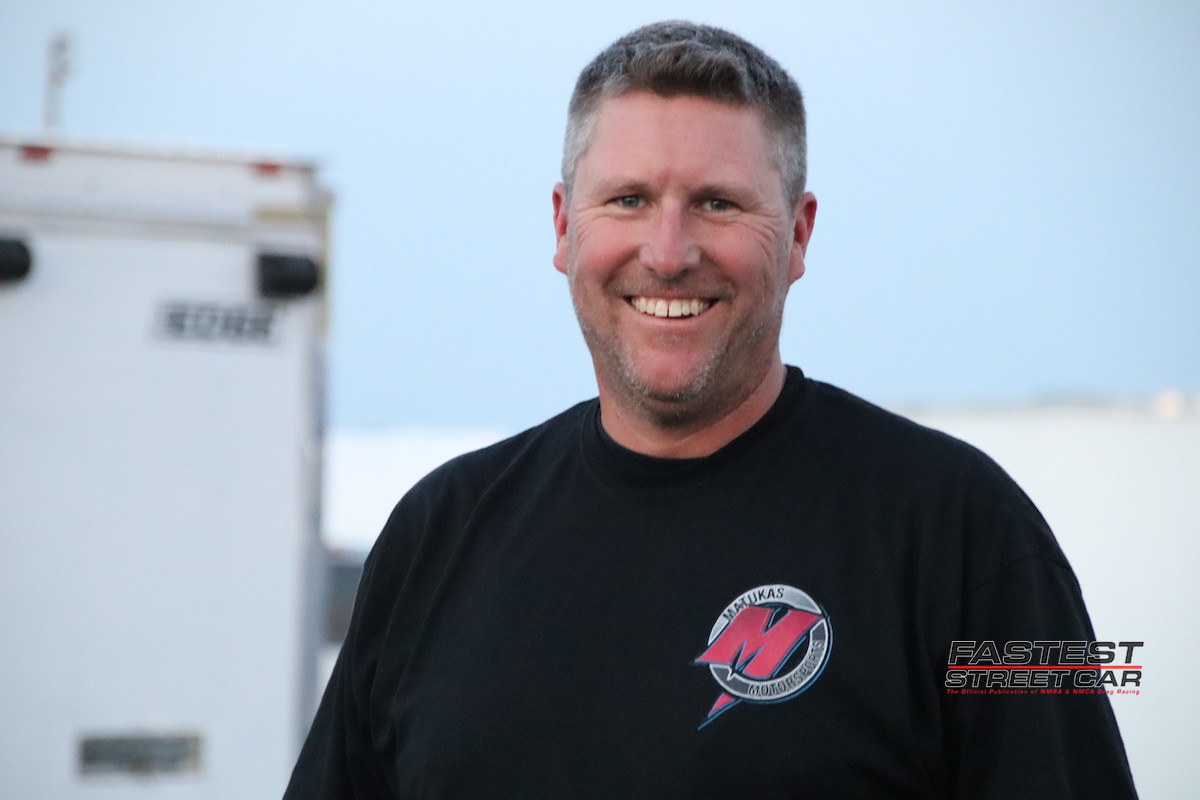 I had a passion for them, and it was a boost of adrenaline and a blast. I started with a Suzuki 250 and then I had a Banshee, which was really fast. I remember when a guy ported the heads on my Banshee so thinly that one day at the sand dunes, I had to patch them using J-B Weld and a Pepsi can so that I could ride the rest of the weekend. I definitely have a lot of good memories of the four-wheelers.

THEN YOU BECAME ATTRACTED TO RACE CARS. IS IT SAFE TO SAY YOUR FATHER WAS AN INFLUENCE

Oh, for sure. My dad has always been into cars, and when I was about fourteen or fifteen, I was going to the tracks with him. He had a 1971 Corvette that he raced in NHRA Super Stock, and he ran that through the late 1980s and then sold it. After that, he bought a 1966 Chevy II and when I was a senior in high school, I started racing that car. Like my dad, I followed the NHRA Super Stock circuit, and I was running 9.70s at 133 mph in the car.

DID THAT EARLY RACING INSPIRE YOUR CAREER CHOICE

Yes, it did. Around that time, I had talked with the guy who used to work on the Chevy II, Gary Hanson of Hanson Race Cars, and he suggested I learn how to weld. So, I went to the local tech school right out of high school and got certified in welding, and he said he'd give me a shot and I started working at Hanson Race Cars. They took me under their wings and I was there until I turned 21 in 1995. Working with those knowledgeable people at the time expanded my knowledge of how a car is built. After that, I went to Richmond Performance Center and moved from California to Indiana for the job.

Yes, I was. There were more tracks around me in Indiana than there were in California, and I was racing the NHRA circuit while also building race cars at Richmond Performance Center. That was one of the biggest moves I had ever made in my life. I was applying some of what I had learned at Hanson to Richmond. It was a good experience. I was blessed. God put me on the path that made me the person I am today.

It sure was. In 1998, I started doing some side jobs. While still living in Indiana, I would go to Bowling Green, Kentucky, where my parents, Jack and Donna, had moved to, and put cages in cars or work on chassis in my dad's shop, which was on their property. Before long, my dad, who was really into cars, started selling his cars, which gave me more room to work in the shop. It got to the point where people knew I was building race cars, so I moved from Indiana to Bowling Green, Kentucky, and my dad told me that he would give me six months to build my business in his shop, and if I didn't, I'd have to find something. I raced NHRA Super Stock through the 1990s. 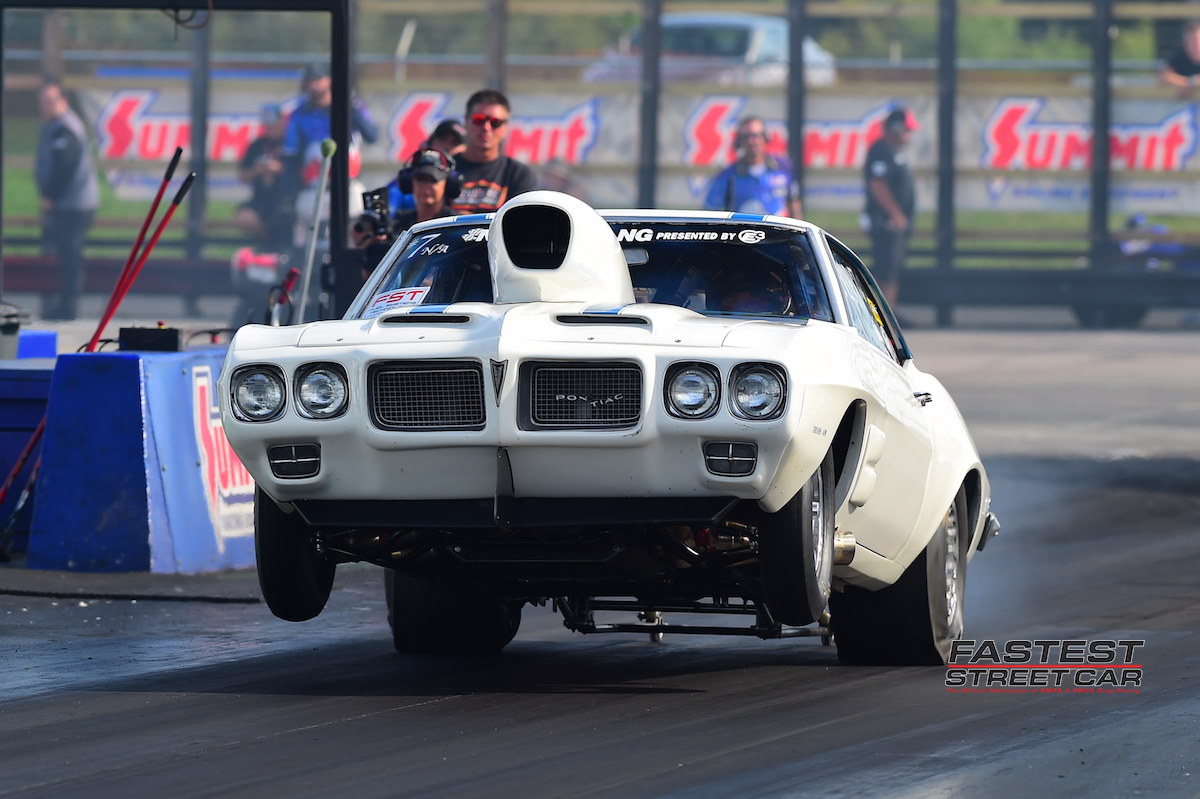 I was in that shop from 1998-2011 before shutting everything down and moving back to California and getting into real estate. I had a great opportunity to do that and didn't want to look back and regret that I hadn't given it a try. I was selling a lot of foreclosed homes. I was traveling throughout the state of California for the job, and I loved it. But after a while, my wife and I decided we wanted to go back to Bowling Green, Kentucky, so we did, in 2014.

WE RE GLAD YOU RESTARTED YOUR BUSINESS, MATUKAS RACE CARS, WHEN YOU MOVED BACK TO KENTUCKY.

The reason we bought the house that we did was because it had a 1,200 square foot building on the property with concrete and electric, and I felt that with that, I could go right back into building race cars. I was putting a lot of cages in cars, and building complete race cars.

DID IT TAKE SOME TIME TO BUILD THE BUSINESS, OR WAS IT FAIRLY INSTANT

I had a lot of business from family and friends, including John Langer, Steve Cagle, Cameron Coble, Jeff Knox, Robbie Blankenship, Donnie Bowles and Susan Roush McClenaghan, and I had a decent name in the racing industry. I had also built cars for Sam Vincent and Don Burndown Burton, who had many wins. I ended up building a car for Mark VanMeter, which Joel Greathouse drove in Outlaw 10.5W back in 2005. Steve Petty was helping us tune the car. We outgrew our space, and needed to expand, and we just recently completed an extension of the shop. It's now 4,000 square feet, which is just unbelievable.

WHAT ALL DOES YOUR SHOP OFFER

We do all sorts of chassis work, and we can take a car from any stage to a full-blown Pro Mod. We have tubing benders, a lathe, mills and welders. There are usually about four cars or so in the shop at one time, and every single one of them is unique, and not like it's off of a production line, which is another reason why I love my job. We don't do body work, paint work or engine work. I would rather sub that out to people who specialize in that.

ARE YOUR SKILLS CONTINUOUSLY DEVELOPING 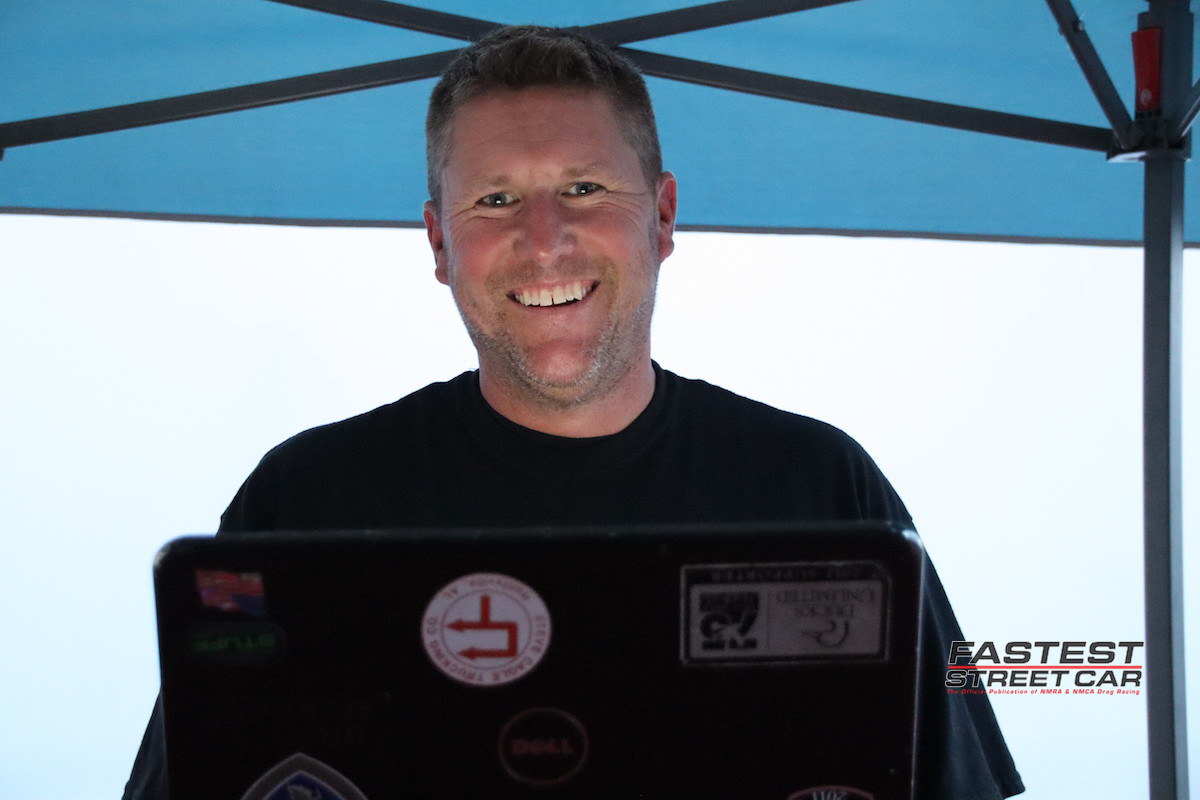 YOU MENTIONED EARLIER THAT YOU ARE ESPECIALLY FOND OF THE ENGINEERING ASPECTS OF YOUR WORK.

Yes, and I think that goes back to my childhood. I was always a curious kid, and I always wanted to know how things work and what makes things do what they do. When I see a four-link under a car, I want to get under it and understand how it does what it does. I think that helps me to be a better chassis builder.

YOU VERY FAMOUSLY REBUILT NMCA DART NA 10.5 PRESENTED BY DIAMOND PISTONS DRIVER JOHN LANGER S FIREBIRD IN JUST 59 DAYS IN EARLY 2019. WHAT COMPELLED YOU TO COMMIT TO SUCH A FEAT

I've known John Langer since 2000, and we're good friends. Actually, he's like a brother to me. I had done some work on his car here and there through the years, and he had been talking about ways in which he could go even faster in his car. I suggested that instead of spending more money on power, we should look at some chassis upgrades. We had started that conversation a while ago, and John dropped the car off at my shop in November of 2018. I had to finish some other projects, but on New Year's Day of 2019, I sent him a picture to let him know that I was getting started on the car. Because the NMCA race in Florida was a few months away, I put the hammer down and worked on his car seven days a week, twelve hours a day. I only took three days off in that time, and that was to go to school functions with my kids. Heck, I even lost 35 pounds in that time, which I needed to do anyway. I called John a week before the NMCA race in Florida, and he came to help me perform final prep on the car. It was snowing, but we fired that thing up at 1 a.m. on the Tuesday before the NMCA race in Florida.

WHAT WORK DID YOU PERFORM ON LANGER S CAR, WHCH IS A FAN-FAVORITE

We changed absolutely everything on the car from front to back, except for the sheetmetal, the Funny Car cage, the main hoop, steering wheel, rack and pinion and steering arms. I even made a Bud Light gas pedal for the car because John is a hardcore Bud Light drinker. I wanted him to have a car that would help him be in the spotlight. 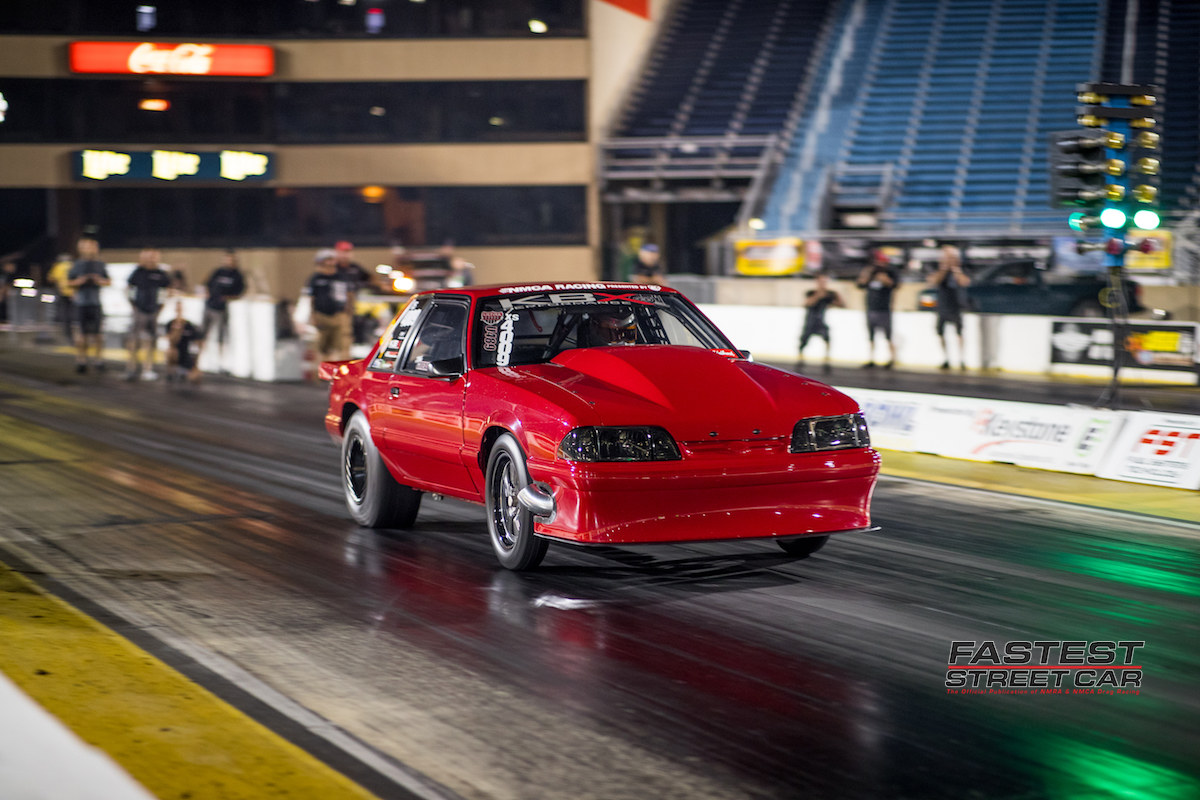 That weekend had so many highs and lows. We had our quickest pass ever with a 7.84, but we also had a problem with the master cylinder and John couldn't get the brakes to work, or the chute to open, and he ended up in the field at the top end of the track. We got the bugs worked out and got to the final round and got a runner-up. Then, John won at the NMCA race at Summit Motorsports Park in Ohio that summer. We were really happy because the work we had done to the car had helped show the true potential of John's engine.

IT CERTAINLY SEEMS AS THOUGH YOU DON T EXPERIENCE MUCH DOWNTIME, OR DULL MOMENTS, AT RACES. WHEN WE SAW YOU AT THE FINAL NMCA EVENT OF 2020, YOU HAD JUST MADE A RAPID REPAIR UNDER LANGER S CAR.

That was something. I was on the starting line watching John's pass, and the red bulbs on the tree started flashing. John's deployed chute had gotten stuck on barrels of sand after the finish line, and Joe Clemente's deployed chute had caught the wheelie bars on John's car, which broke them into several pieces. The chute mount was ripped off, too. John said we were done, and I said no, we were not. I went to Susan Roush McClenagan's trailer and borrowed her welder and some one-inch tubing, made repairs within a few hours and John went to the semifinal after that.

YOU RE VERY COMMITTED, STEVE. WHAT ARE SOME OF THE THINGS YOU ENJOY DOING WHEN YOU RE NOT WORKING

When I'm not at the shop or a race, I love to travel with my family. We enjoy going to all of the national parks. We went to Mount Rushmore in South Dakota a few years ago, and Niagara Falls last year. We love the outdoors and hiking. (Interview from the January 2021 issue of Fastest Street Car) 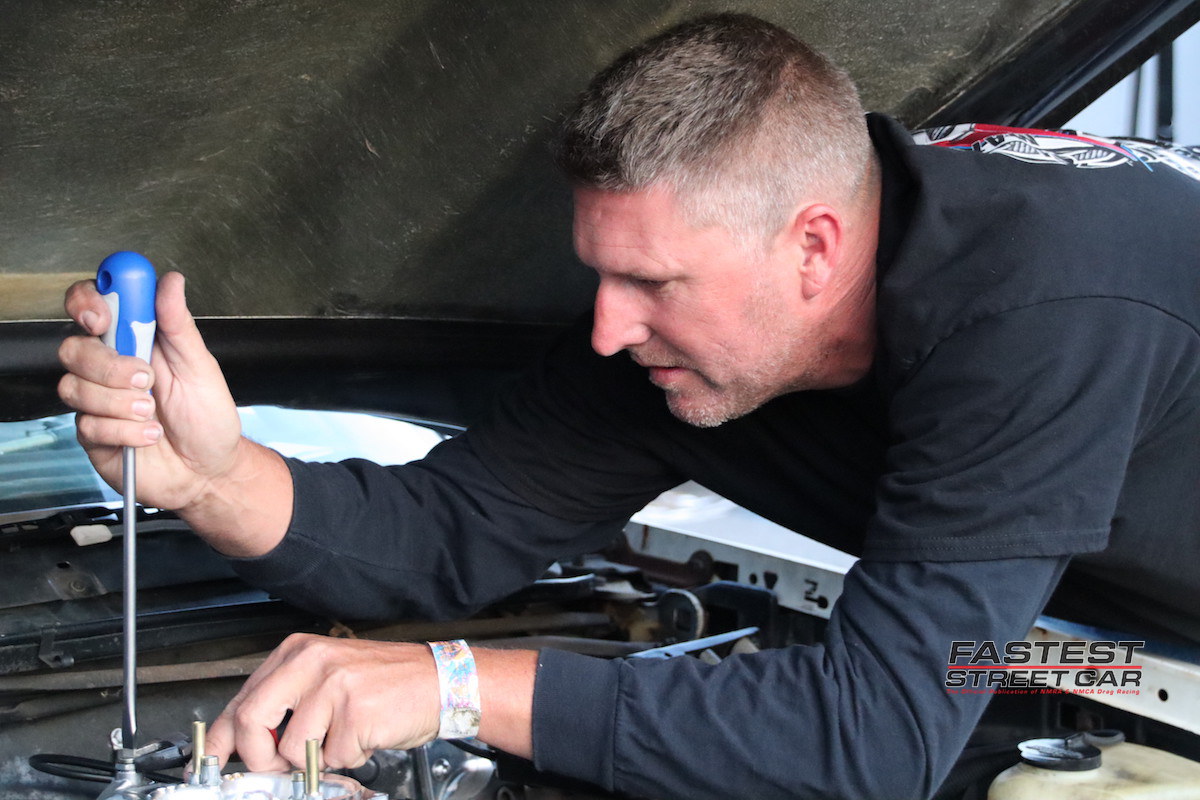