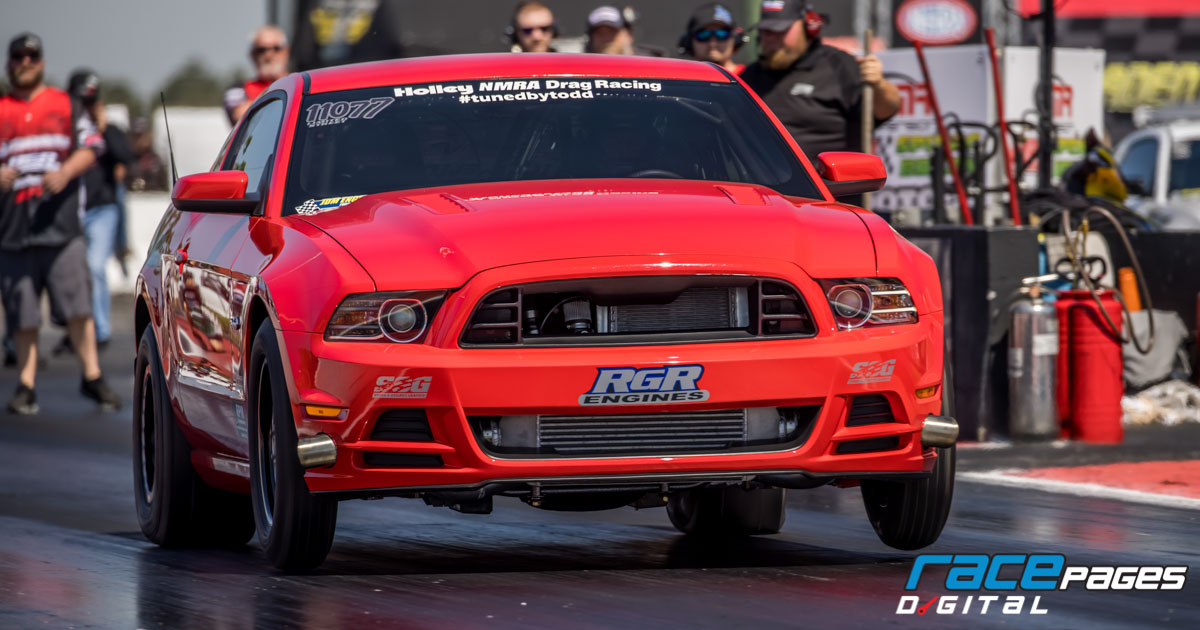 Having helped his friends Chad Wendel in NMRA JDM Engineering Limited Street and Chad Neuenschwander in NMCA Dart NA 10.5 for years, Stacey Roby is no newcomer to the NMRA/NMCA family, but he finally made his own debut in the driver's seat at the 2021 NMRA season opener. With an interest in drag racing going all the way back to his high school days, Roby has raced locally around his hometown of Saint Marys, Ohio, for years. I've got five Mustangs in my shop right now, laughed the man who was a diehard small-block Chevy fan until he purchased his first Mustang in 98 and changed affiliations. By day, Roby operates his landscaping company, HDL Property Services. The business is based out of a 6,000-square foot facility, which enables him to tinker on cars on the side and yes, there's even a chassis dyno on the property. We do some roll cages and things, and that's how I've funded my racecars by helping friends, he explained of his hobby, which began in the late 90s and early 00s.

In 2020, Roby purchased a motorhome so that he could be more comfortable while on the road helping his friends racing efforts. They inspired him to start driving as well, and Roby struck up a conversation with multi-time NMRA champion Mike Ciborowski. I wound up purchasing his 14 Mustang that he won the championship with in Limited Street, as a rolling chassis, explained Roby of the transaction that took place later that same year and kicked off the start of his own class racing career. Chad Wendel and I agreed to go in as a team and build it together. Roby had a Coyote engine from Joy Neuenschwander's old Factory Stock ride just laying around, so he added a ProCharger and installed that into the S197 after Rich Groh of RGR Engines had gone through it and given the bullet his blessing. We got it together and tested at Dragway 42 at the end of the season, but the weather went south right after that, Roby recalled of his short-lived driving stint. In the meantime, however, Groh had been summoned to start on a new engine. I gave him free rein to build whatever combination he would build for himself if he were running in Limited Street, shared Roby of how he trusted Groh to spec out the Coyote-based platform. Groh elected to use a ProCharger supercharger, as well as a Turbo 400 from RPM Transmissions with a PTC torque converter and Holley Dominator EFI system that will be tuned by Todd Dennis.

A complete Moser 9-inch rearend, center section, and axles were installed out back, along with double-adjustable Viking shocks and struts at all four corners. UPR Products front end travel limiters hold the Mustang in check, while BMR Suspension components also help to keep it firmly planted so as to best maximize the power output. I'm also running a stainless forward-exit exhaust from BarnBilt Speed & Fab, and RC Comp wheels, noted Roby. TBM brakes were sourced from HPJ Motorsports, as owner Michael Zacheis has been gracious enough to offer his help to Roby as needed I still call on Mike [Ciborowski] from time to time, too, to pick his brain since this was his car. It took a little longer than expected, between Covid-19 delays and trying to procure parts, but everything finally came together in time for the start of the 2021 Holley NMRA Ford Nationals drag racing season. A month ago, this car was nothing but a bare shell, Roby confessed. Chris Spall of Spall's Chassis & Performance did the 25.3 chassis for us. We picked it up in February [2021] and spent a month thrashing to get it ready for Bradenton. In Florida, Roby made his licensing passes and was cleared to race at the 27th Annual BMR Suspension NMRA Spring Break Shootout season opener at Bradenton Motorsports Park. He ultimately qualified fifth in the NMRA JDM Engineering Limited Street field on an 8.637 at 153.47mph blast, but slowed in round one of eliminations and went out to Kent Nine. We've still got to put some more laps on it to work out the new car blues, but Wendel/Roby Racing is committed to running the entire Limited Street season, asserted the rookie racer who went all in by purchasing a stacker and toter. I want to bring this car back to the winner's circle. With a bright future ahead of him full of possibilities, Roby knows he couldn't do it without the help of others including friends like Bryan McCullough, Steven Sharp, John Gibson, and Jay Nelson in addition to the Wendels and Neuenschwanders as well as his wife, Megan, and four sons, Hayden, Hudson, Dylan, and Logan.
JDM Engineering Limited Street
,
Mike Ciborowski
,
ProCharger
,
RGR Engines
,
Stacey Roby