By Mary Lendzion Steve Halprin has been around racing for most of his life, and when he came to NMRA VP Racing Madditives Street Outlaw in 2020, the odds were he was going to be outstanding, and he was. The Michiganian motored to a fourth-place finish that year, and then turned his focus to topping that in 2021 in his Mustang hauling with a 410 cubic-inch Ford built by BES Racing Engines and a Harts turbo. He got started by leading qualifying with a 4.24, finishing as the runner-up with a lifting 5.85 and setting records in the category with a 4.229 and 171.25 mph at the BMR Suspension NMRA Spring Break Shootout in March at Bradenton Motorsports Park in Florida. Those records still stand. Halprin then qualified in the third spot with a 4.39 and went to the NMRA Winner’s Circle when his opponent turned on the red light at the Scoggin Dickey Parts Center NMRA/NMCA All-Star Nationals presented by MAHLE Motorsport in April at Atlanta Dragway. He followed that by qualifying in the third spot with a 4.35 and was forced to lift to a loss in the first round of eliminations at the NMRA/NMCA Super Bowl of Street Legal Drag Racing presented by HPJ Performance in May at World Wide Technology Raceway in Illinois. He high-tailed it to a 4.41 to qualify in the third spot and lost in the second round of eliminations with a 4.43 at the NMRA Ford Performance Nationals in June at Summit Motorsports Park in Norwalk, Ohio, and then qualified in the seventh spot with a 4.45 and lost in the second round of eliminations with a 4.40 at the Inaugural Arrington Performance NMRA/NMCA Power Festival presented by Force Engineering in July at U.S. 131 Motorsports Park in Michigan. 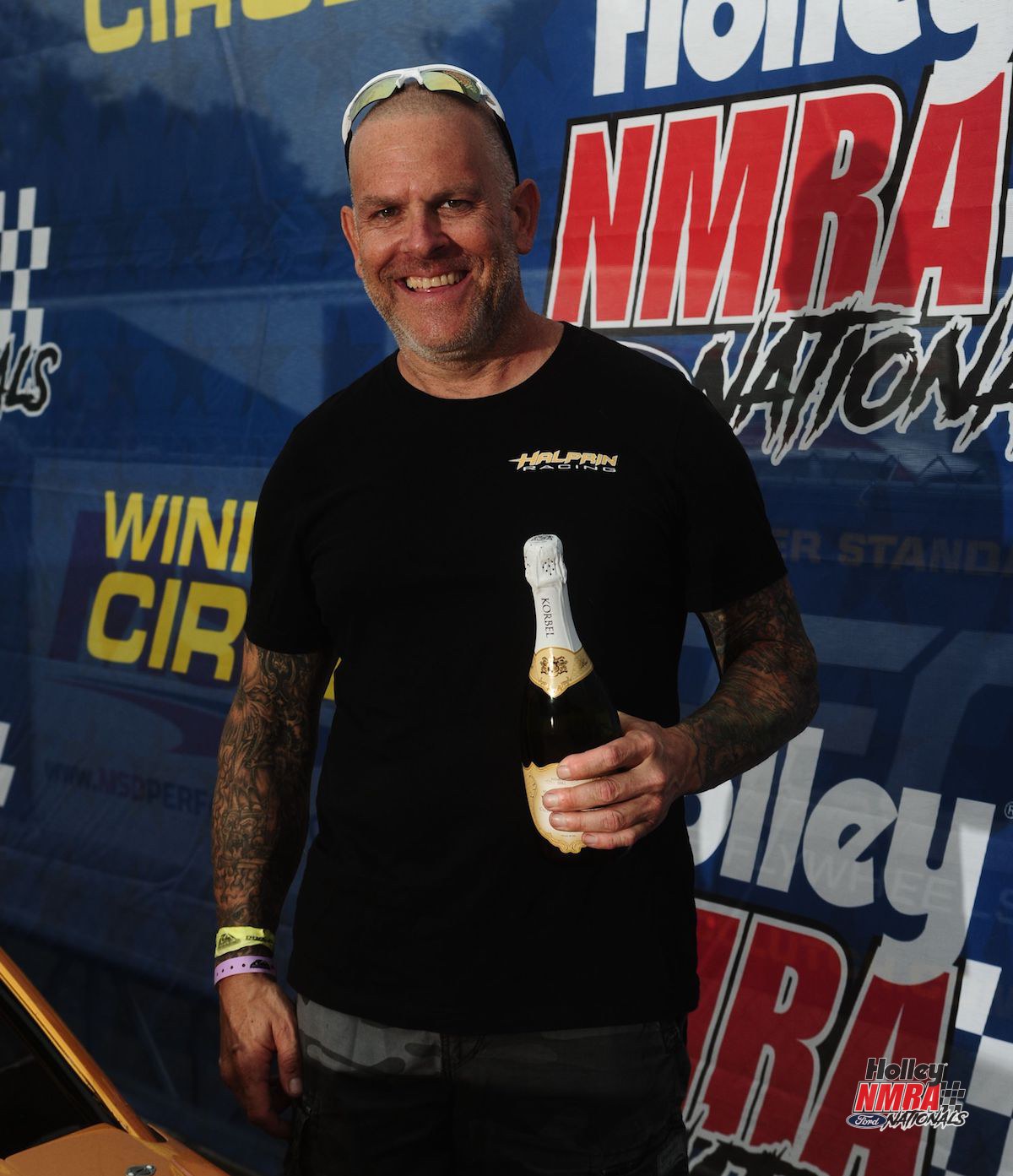 With nerves of steel, he headed to the final event of the season, the Whipple Superchargers NMRA All-Ford World Finals presented by Competition Clutch and Holley Intergalactic Ford Festival in September at Beech Bend Raceway Park in Kentucky, where he qualified in the fourth spot with a 4.38, lost in the second round of eliminations with a 4.86 and emerged as the 2021 to NMRA VP Racing Madditives Street Outlaw champion. “It was rough because everyone in this class is a great competitor, including John Urist, Tony Hobson, Nicky Notch and the others, and we earned the championship by a very close margin against John Urist,” said Halrpin. “I'd like to thank my father, Charles Halprin, for all of his time and effort with Halprin Racing; my crew chief, Justin Haddon, for all of his hard work and awesome tuning, Dan Oliphint, for all of the maintenance on the car, lining me up at the starting line and the other things he does behind the scenes, new crew member, Josh Nelson, for his hard work, and my wife, Joann Halprin, and mother, Linda, for keeping me calm. I’d also like to thank BES Racing for building us championship-caliber engines, Harts Turbo for giving us the awesome 88mm turbo that wins races, D&D performance and Don Walsh for the use of the shop and the great staff and finally, SuperAbrasives, Inc. for the sponsorship.” Halprin will be hailed at the NMRA Ford Nationals Champions Ceremony, which will be held during the PRI Show on Dec. 10 at the Indiana Convention Center in Indianapolis, and in the upcoming Champions Issue of Fastest Street Car Magazine. “Hopefully I can have continued success over the next few seasons, but it will take a lot of hard work as there are tons of great competitors out there,” said Halprin. “Win or lose, I'm happy to be able to race at this level with so many great people.” 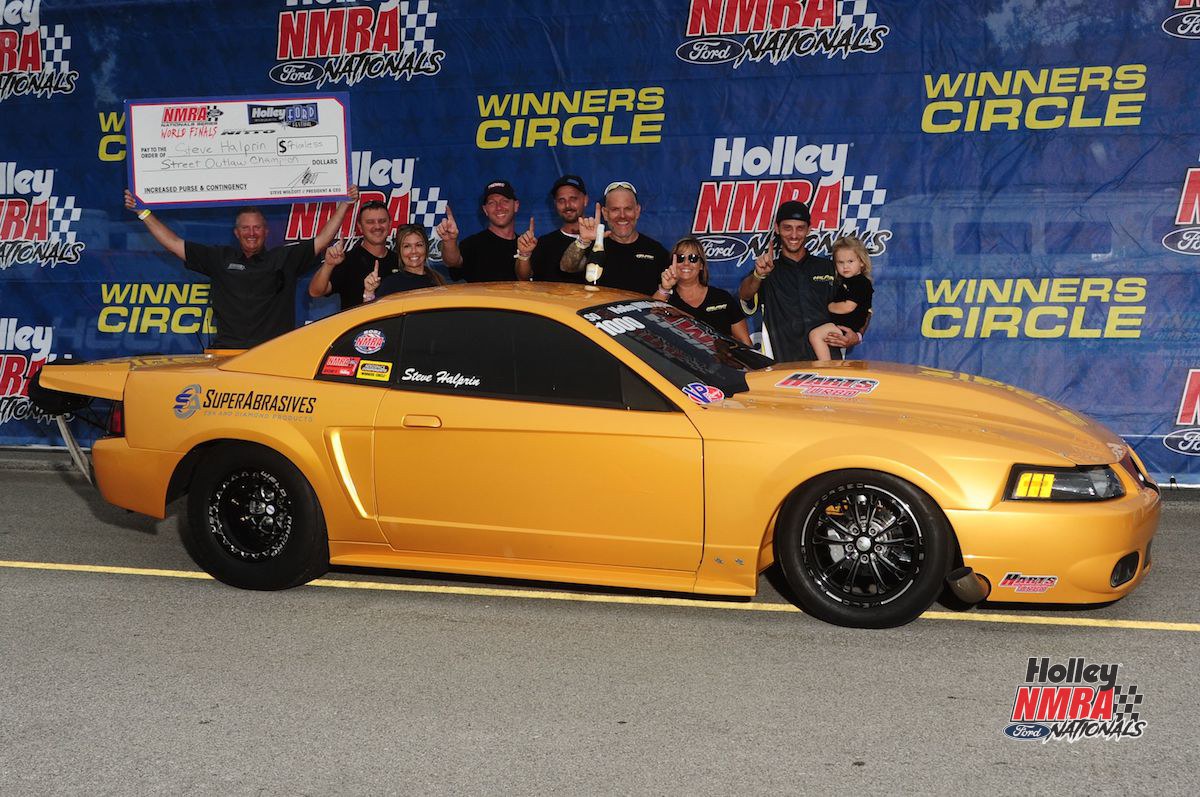