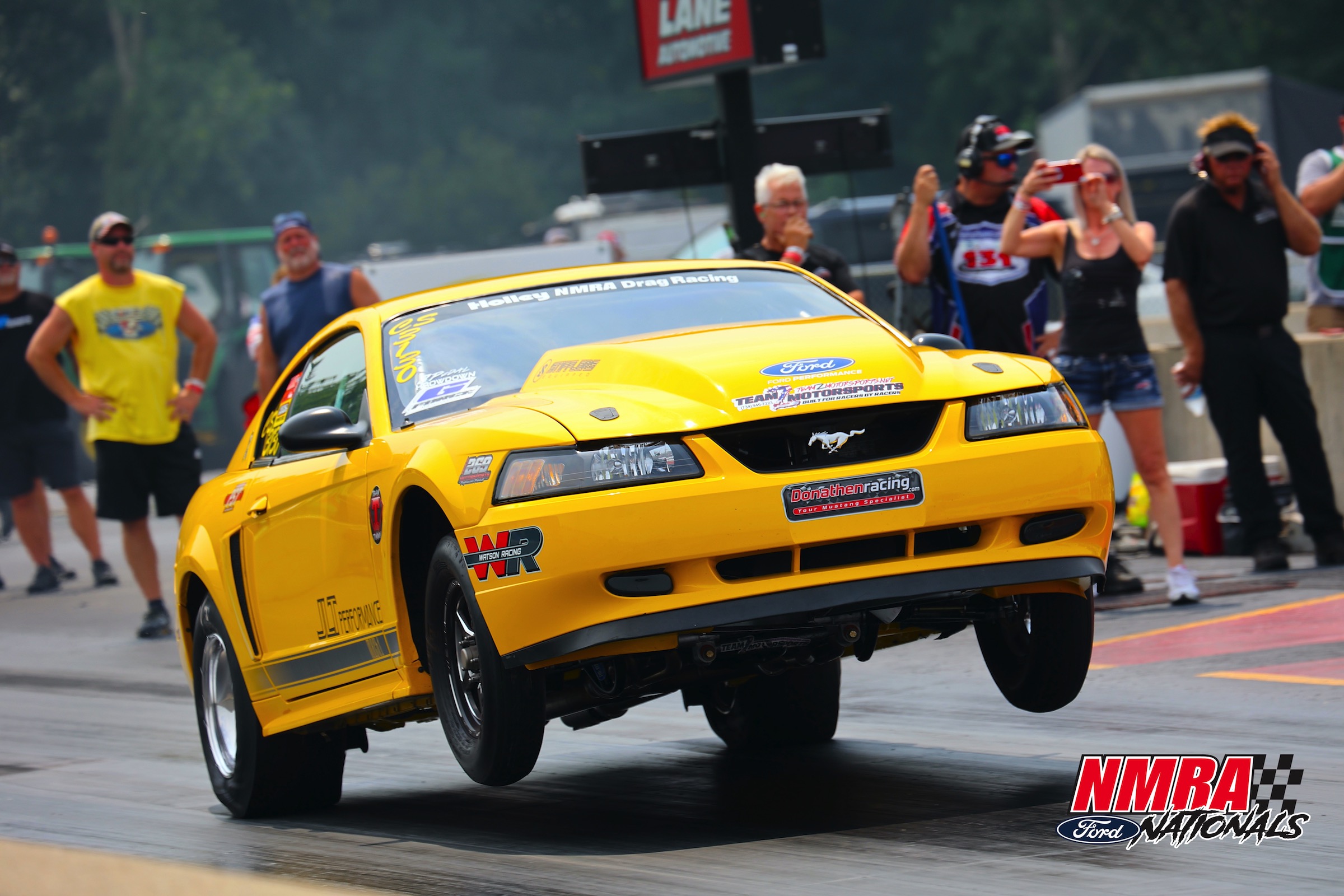 The Inaugural Arrington Performance NMRA/NMCA Power Festival was John Keepers first time racing in Torqstorm Superchargers/QA1 True Street. His Redfire 2003 Cobra has a Whipple 2.3-liter supercharger atop a stock engine, a McLeod clutch, a T-56 with a 26-spline input shaft, and an IRS with a stock 3.55 gear. From Commerce Township, Michigan, Keepers used a pair of Mickey Thompson ET Street R 26x10.5 bias-ply tires to run an 11.82, an 11.93, and an 11.92 to arrive at an 11.895 average.

[gallery size="full" columns="2" ids="19997,19998"] From the outside, it looked like smooth sailing for Tim Flanders and his Avalanche Gray four-eye Fox. Powered by a Fonzie Novelo-built Coyote engine fitted with Frankenstein-ported Gen 2 cylinder heads and boosted by a Force Inductions 86mm S491 turbocharger. Controlled by a Holley EFI system, it delivers more than 1,300 horsepower to the track via a Turbo 400 auto and a 9-inch. Built by Flanders in his Battle Creek, Michigan, shop, the car averaged 8.99 to take the top spot in TorqStorm Superchargers/QA1 True Street competition with help from his crew chief Mallory.

One car we enjoyed watching go down the track during Torqstorm Superchargers/QA1 True Street, David Stoll's 1980 Fairmont utilizes a Coyote engine, a Tremec TKO transmission with a Centerforce clutch, and an 8.8 with a 4.56 gear. The Coyote gets a little more breathing room thanks to a JLT Performance cold air intake, Boss cams, a ported 2018 intake and throttle body, and BBK long-tubes and X-pipe with Gibson mufflers. Using a Ford Performance Control Pack, OZ Tuning makes everything play nice, while the engine was also fortified with Boundary oil pump gears and crank sprocket, and an Innovators West balancer. To make the swap happen, Stoll used a UPR K-member, along with the company's front and rear suspension paired with Viking coilovers and Strange Engineering shocks. The car started out life as a six-cylinder automatic, so Stoll swapped in a Mustang clutch and brake pedal assembly with a Wilwood master cylinder. Stoll's True Street average was a 12.096, with a best pass of 11.63 at 120 mph. His best overall pass is an 11.51 at 121 mph.

You never know what you might find in the UPR Products Car Show. Given the proximity to the Motor City, the Inaugural Arrington Performance NMRA/NMCA Power Festival Presented by Force Engineering attracted some interesting rides. Andy Benedict of Bloomfield, Michigan, rolled onto the property at US 131 Motorsports Park in his Midnight Blue 2006 Ford GT. The supercar still looks as striking as it did the day it rolled off the dealer lot.

Thanks to a pit accident when another car backed into his 1996 Mystic Cobra, Tom Mueller had to find a local salvage yard for a driver-side door and window. He was able to find an SN-95 door, but had to source a window from a 2003 Mustang. The Richmond Gear Factory Stock competitor was still able to make qualifying, where Mueller is qualified 6th with a 10.68 at 124 mph. He uses a Gen 1 Coyote with a G-Force G101A and an ACT clutch.

Peeking under the hood of Tony Brooker's 2003 Mustang we spotted something unusual a TorqStorm Supercharger bolted to his Two-Valve 4.6-liter engine. It turns to that his brother is none other than Chris Brooker of TorqStorm Superchargers, which facilitated the construction of this custom kit. Tony built a bracket template out of wood, and turned to his brother's company to create the custom bracket for the blower head unit. More at home on an autocross course, he managed to run a 13.3 at 106 mph with his stock engine fed by 10 psi.

Running out of the BA Motorsports camp, Jim Ault utilizes a BES Four-Valve engine with a Forced Inductions 76mm single turbo and an Extreme Automatics Powerglide with a Hughes converter. Competing in Edelbrock Renegade, Ault is qualified 19th, but Renegade is combined with NMCA's Extreme Street class so there are a lot of competitors here at US 131 Motorsports Park. BA Motorsports Brandon Alsept tunes the car using a Holley Dominator EFI.

Michigan is a long ride from Brandon, Florida, so after the Norwalk event, Junior McKenzie left his trailer at Dennis Conway's place to make for an easier drive home and back here to US 131 Motorsports Park for the Inaugural Arrington Performance NMRA/NMCA Power Festival. McKenzie runs his 1979 Mustang in ARP/Magnafuel Open Comp with a naturally aspirated 408 Windsor under the hood, and David Piercey Mustang Performance-built C4 in the tunnel with an FTI converter. Piercey also set up the car's 8.8 rear, and this weekend he's running a 9.87 dial. In round 1, he ran a 9.88 on that 9.87 dial, so that was good. Lisa, his wife, is the brains of the operation, McKenzie says, so we're sure she had to help redo the carburetor after a float issue earlier in the weekend. McKenzie sits 10th in the points, so a victory here at US 131 would do a lot of good in moving up.

Raise your hand if you've heard this story before. G-Force Racing Transmissions racer Frank Paultanis' driver side window wouldn't go up while sitting in the lanes getting ready to make his 3rd round qualifying hit. We're sure he treated the door panel to a few whacks in an attempt to jar the window motor into doing its job, but alas, the motor wasn't having it. As you know, competitors aren't allowed to run with windows down so Paultanis was forced to go without a 3rd round qualifying pass. Paultanis will be looking to go rounds today in eliminations, but he has a tough customer in Randy Soper for round 1. 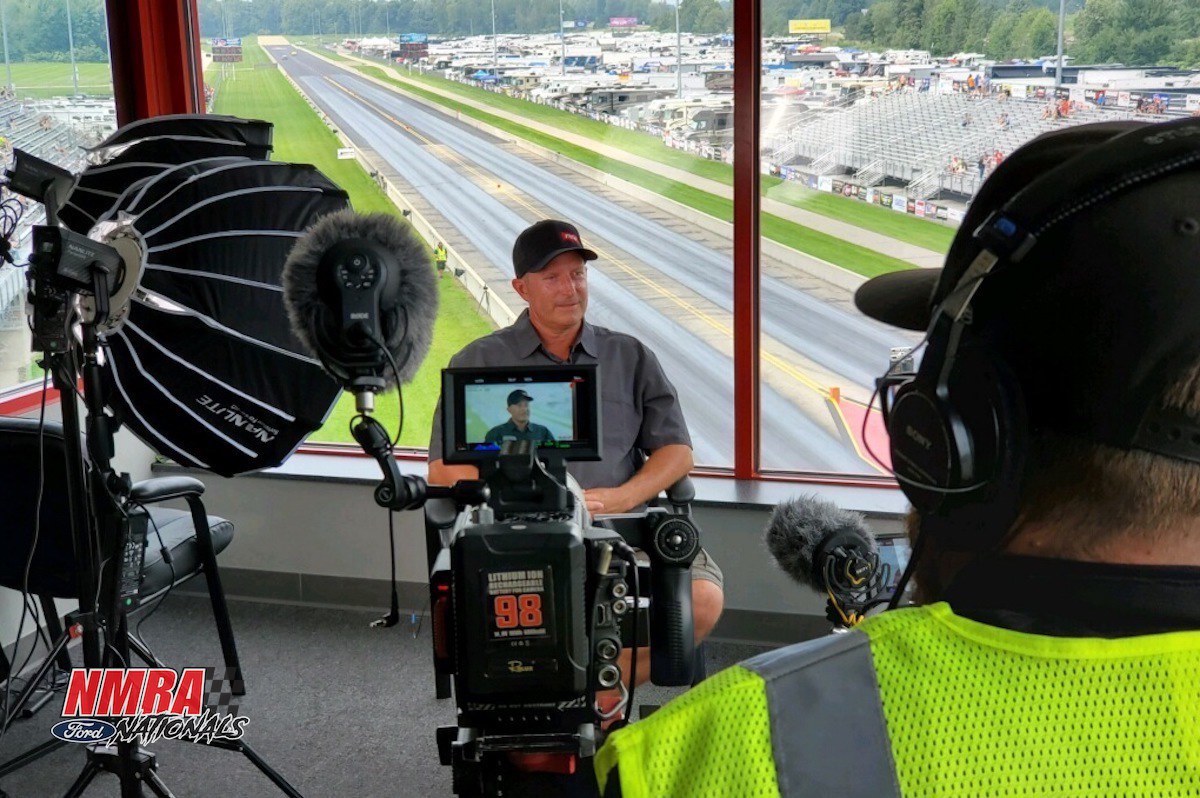 Steve Wolcott, the president and CEO of ProMedia, the parent company for the NMRA Holley Ford Nationals and NMCA Muscle Car Nationals,'sat down with our colleagues from the PRI Road Tour yesterday during the Arrington Performance NMRA/NMCA Power Festival presented by Force Engineering at U.S. 131 Motorsports Park.I was happy to have them at this event, along with all of the racers and industry influencers, said Wolcott. We talked about how important motorsports is to our society and economy, and how it affects our fans and their families. We also covered the RPM Act, and its impact on our freedom. It was a very positive conversation.

Though it isn't an R-model, as the wheels might lead you to believe, Ryan Johnson's Vibrant Red stallion in the UPR Products Car Show is indeed a 1993 Mustang Cobra. A product of the storied Special Vehicle Team, this example is no stocker. Built over a few years, it is powered by a 331 stroker topped by AFR cylinder heads and boosted by a Paxton Novi 2000 supercharger routing boost through a custom intercooler. Behind that polished engine bay are a TREMEC TKO five-speed manual transmission and a stock 8.8-inch rear fitted with 3.55 gears. Johnson is still dialing in the tuning on the Cobra's Holley EFI after adding a larger fuel pump to feed the hungry small-block. He is, however, expecting it to deliver more than 700 horsepower.

Competing against Coyote engines in the Richmond Gear Factory Stock ranks with a Two-Valve 4.6-liter with a stock intake, stock crank and stock heads is no small task. It requires a refined combination, plenty of rpm, and a little bit of luck. It seems that Mark Mayhem Anderson put all three together. He draws on the experience of his an experienced group for assistance and advice, including his father Ron Anderson (engine), his uncle Rick Anderson (Holley EFI tuning), Matt Bell of Redline Motorsports (tuning/dyno), Ryan Hecox (chassis/suspension), and Adam Cox (starting line). Putting that support to good use, his Laris Motorsports Insurance-backed Fox qualified in the top spot on the merits of a 10.73 at 123.63 hit. He coasted through the first round before lining up against Justin Fogelsonger in round two, , where he won on a holeshot and headed to the final against defending champion John Leslie Jr.

Chris Parisi wanted to make the most of his 17-hour commute from Florida this weekend. To that end, he triple-entered in Ford Muscle, HP Tuners Super Stang, and Torqstorm Superchargers/QA1 True Street. He narrowly missed the 12-second win in True Street, but took out number-one qualifier Marvin Knack in the first round of Super Stang by running a 12.08 on a 12.05 dial-in. Parisi recently added a Circle D torque converter and turned to Tony Gonyon at HP Tuners to dial in the calibration to get him out of the hole quicker and it seems to be working out.

Tim Matherly (Left) is known for his reaction times, and that has been his focus during Sunday's eliminations. He was able to get past Frank Paultanis, but he has Shiftin Shane Stymiest in the semi-final. For his part, Stymiest (Right) has mostly been working on getting his car to leave today.