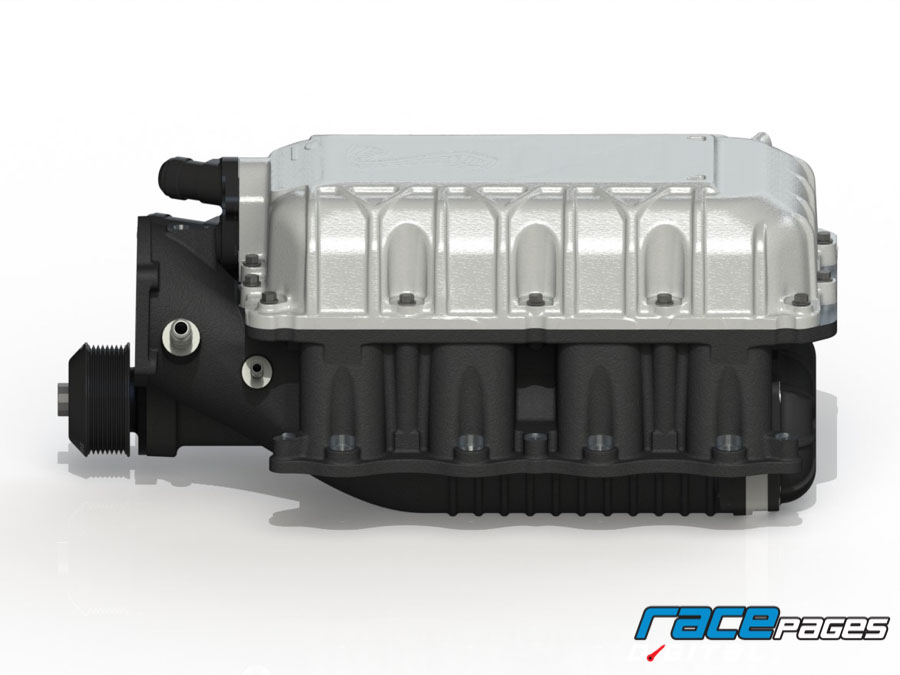 Written by Steve Turner Photography courtesy of the manufacturers Positive-displacement superchargers are known for near-instant boost that carries throughout the powerband. The Twin Vortices Series (TVS) supercharger from EATON is successor to the historic Roots design and addresses its weaknesses, like efficiency and noise, by reducing air leakage between the rotor with more twist in their design. Utilizing longer rotors with much greater twist, EATON was able to improve the efficiency of the supercharger and customize for each application by adjusting the percentage of twist. Many of the pioneering efforts that led to greater TVS efficiencies were born from refining the company's smaller superchargers for OE applications with specific needs. The latest innovation is the EATON TVS R3100 rotor pack spearheaded by Nathan Deville, lead engineer at EATON. He is an aeronautical engineer who puts his voluminous knowledge of airflow to use building better boost-makers. While early modified Roots-blower, as deployed on the late 2000s Shelby GT500, employed a modest 30 degrees or so of twist, the early TVS rotors twisted as much as 120 degrees. Next-gen TVS rotors beginning with the R2650 deployed on OE engines like the Shelby GT500's Predator 5.2, make use of a mind-bending 170 degrees. This nearly connects the inlet and outlet, which was previously unthinkable, but the machining tolerances of EATON's proprietary machines made the design possible. Leveraging computational flow dynamics, that leap actually improved efficiency by more than 15 percent by using a system approach in the design of the case to complement the rotors. I use my aeronautical degree more in boosting organization than I actually did in the aerospace industry. And that's, that's why I wanted to have an experience in the aerospace industry, he said. It's a lot more mechanical than people think. And you know, a supercharger is just moving air. So, so I've actually kind of found my own little niche within the boosting group. With demand pouring in from its aftermarket partners for something even larger than the R2650, that niche helped EATON break from its tradition of only developing rotor packs for applications with an original-equipment manufacturing benefactor. The company instead set out to iterate a larger rotor pack that would fit in the confines of the previous R2650 case just for aftermarket applications. The result of that effort is the aforementioned EATON TVS R3100 rotor pack, which is 15 percent larger than its 2650 cousin, and should deliver at least that percentage of performance increase, possibly more, given a complementary case design. In this case, however, that work will be done in collaboration with Eaton's aftermarket supercharger partners including Magnuson Products, LLC; Harrop Engineering; ROUSH Performance; Edelbrock, LLC; and Superchargers Online which are all set to release superchargers based on this new, larger rotor pack a design which benefits from EATON's OE design experience. With this 3100, we wanted to utilize as much as we could from the 2650 to make sure that this is going to be a very robust product, Deville added. We don't want this just to last just a quarter mile right down the strip. Our goal is for it to last the entire warranty period. Great attention to the bearings, seals and oiling ensures these blowers are sealed for life, require no maintenance, and remain durable for OE applications. In fact the supercharger components are so durable they actually challenged the componentry within the testing equipment. At any given time on one dedicated program, we'll probably have four or five durability cells running non-stop, Deville explained. The units probably will run, I'll say about two to three weeks nonstop. When it came to the 3100, Eaton just vetted the rotors in its lab using a modified 2650 case, rather than testing the complete supercharger design as it does for OE applications. But Eaton works continuously with the aftermarket partners on how best to package a unit for a specific application. But as part of the culture shift towards higher horsepower Eaton is differentiating itself by producing a product that not only makes high horsepower but also has long life and consistent performance., Deville added. And one way to do that is, is to be more proactive and educate people out there and say, we want to coach you. We want to be a partner with you. We don't want to just sell you a product and walk away. So the R3100 rotors might just be the beginning of more agile aftermarket development from EATON, which will likely yield even more options to make our beloved machines more powerful. Until then, however, it will be exciting to see what the aftermarket can do with this more muscular TVS rotor pack. Source EATON Eaton.com
EATON Performance
,
TVS R3100