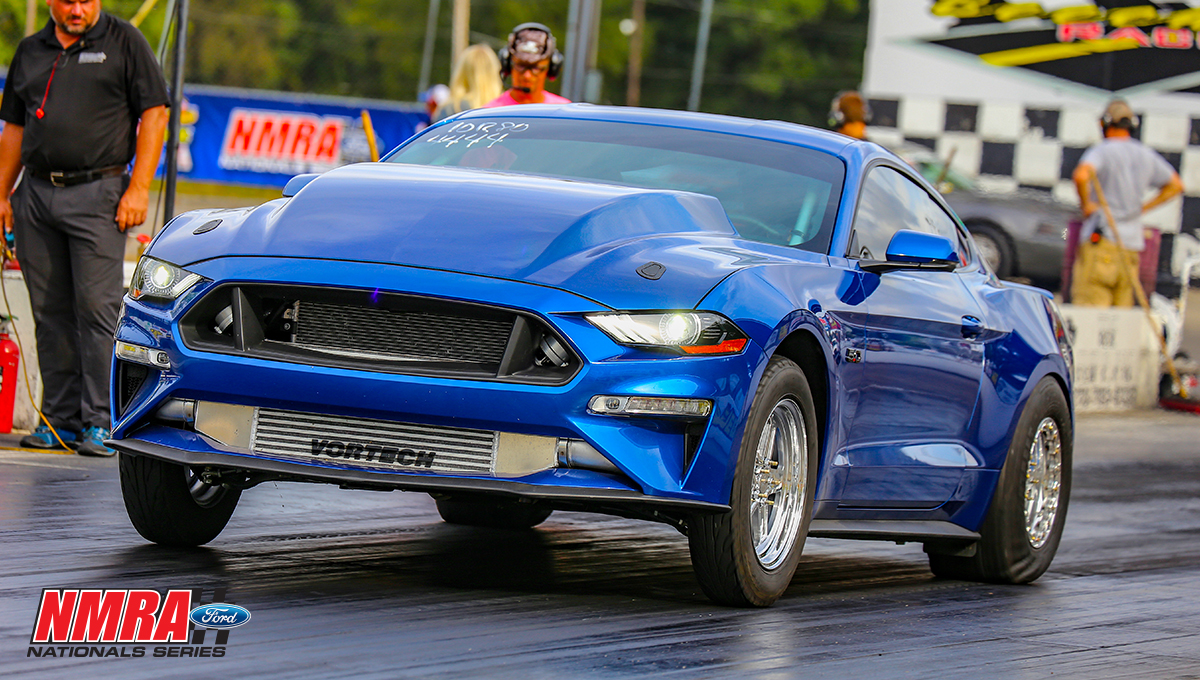 The 2019 Nitto Tire NMRA World Finals + Holley Ford Fest featured a new shootout and it was geared towards Ford's latest transmission, the 10R80. With backing from McLeod by Raybestos, the NMRA sanctioning body went looking for the quickest 10R80 competitors. Answering the call was Team Beefcake Racing's Terry Reeves with his Vortech-powered Mustang as he ran in the 8s and took home the big check after celebrating in the Aerospace Components Winner's Circle. Running an 8-second Mustang takes plenty of power, especially when said vehicle checks in at 4,090-pounds thanks to all of the options available from Ford. Reeves built a 1,050-rwhp combination to achieve the impressive times and it all begins with a sleeved Coyote block from BES Racing. The shop added a set of Ross pistons and Manley rods, which swing off a factory crankshaft. Reeves then turned to a set of GT350 cylinder heads that feature MMR-porting. Right now the camshafts are factory sticks, but a set of prototype cams from COMP are being added this winter. A Vortech JT-B supercharged huffs 25-26 psi of boost into a giant air-to-air intercooler before it is delivered into the 302ci engine. Lund Racing handles all of the tuning chores and Reeves relies on an N-Gauge to upload the new strategy to the factory ECU. The 10R80 transmission has been upgraded using McLeod by Raybestos clutches and Reeves slipped a Circle D torque converter into the bell housing. It isn't easy getting over 4,000 pounds moving off the starting line and the suspension is critical in transferring the weight quickly to the Mickey Thompson ET Street Radial Pro 275 tires. The IRS features the complete Steeda Stop the Hop kit and pair of Viking Crusader adjustable shocks. The front-end is lighter thanks to a Double AA tubular setup and weight transfer is assisted with a pair of Viking coil-over shocks. Bogart Racing Wheels are bolted at all four corners to shed weight and reduce rolling resistance. One of the neat aspects about the wheel/tire combination is the use of a 15x12 rear wheels. Reeves used a Team Beefcake knuckle to fit the rear wheels and maintain proper geometry for excellent sixty-foot times. The benefit of a wider wheel in high power applications is to stretch the footprint of the rear tire. Reeves has been a best of 8.86 at 158 mph during a previous outing and 8.90s in NMRA competition. His goal is to run 8.50s before the tracks close for the winter. [envira-gallery id="13738"]
10R80
,
Aerospace Components
,
Bogart Racing Wheels
,
Lund RAcing
,
McLeod by Raybestos
,
Mickey Thompson
,
Team Beefcake Racing
,
Viking Shocks
,
Vortech