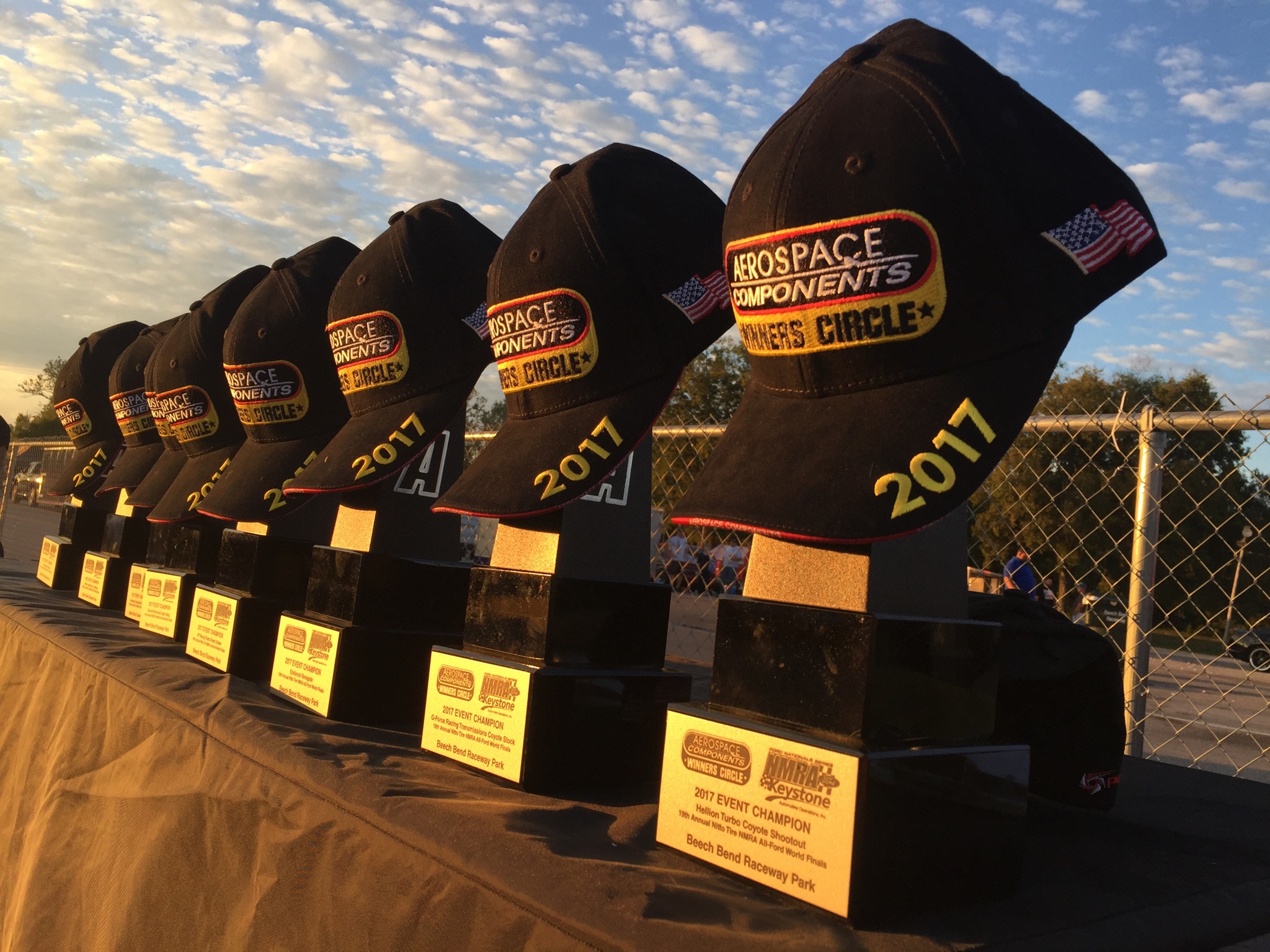 That's all she wrote for the 2017 NMRA Keystone Automotive drag racing series! The action has officially concluded after a great weekend of racing and records at Beech Bend Raceway Park in Bowling Green, Kentucky. The forecast early on promised perfect weather, and Mother Nature didn't disappoint. Awesome conditions combined with the hope of winning a championship had every racer on the property pushing for new personal bests. After a hurried, late-night last-minute engine swap, Manny Buginga of Bridgewater, Massachusetts rallied to take the number one qualifying position in VP Racing Fuels Street Outlaw when he ran 4.342 at 172.06 mph with his Turbonetics turbocharged, MJM Construction Corp 03 Mustang. Then, in eliminations, he pulled up alongside crewman and teammate Rich Bruder. It was a tight race, and although Bruder got to the finish first, Buginga was still happy with the results as the supercharged Fox-body Mustang Bruder was driving belonged to Buginga himself. In Edelbrock Renegade, it was Albuquerque, New Mexico resident Frank Varela who brought the top spot in qualifying home to the Hellion Turbo B-Team camp after going 7.348 at 185.31 mph in his Work turbocharged 89 Mustang known as The Flying Beer Can. As eliminations progressed, though, the attention turned to Winder, Georgia's Bart Tobener and his record-setting Race Part Solutions S550 Mustang. Tobener took the win in each round, and when it came down to just him and Alton Clements in the finals, Tobener kept the momentum going to win the race.

New Jersey native Thomas Annunziata ran the number in ProCharger Coyote Modified in his LaRocca's Performance-backed and Whipple-supercharged 14 Cobra Jet, and his 7.696 at 177.72 mph pass earned him the lead, a new class elapsed time record, and a bye-run in the first round of eliminations. Luck was on Annunziata's side throughout eliminations, as he cruised through three rounds and the win light turned on in his lane during the finals when opponent Haley James lit the red light at the start. In the Steeda Autosports Limited Street category, Kelly Shotwell from Carlisle, Ohio, was the quickest of the bunch when he went 8.938 at 153.39 mph in qualifying in his 95 Mustang. Then, once the competition got started, Shotwell shot through the first two rounds until he was called for the finals. There, his 8.899 at 153.79 mph hit earned the win over Shawn Johnson, and Shotwell drove into the Aerospace Components Winner's Circle. A driver's class, G-Force Racing Transmissions Coyote Stock saw some seriously tough competition. The group was bunched tightly in qualifying, but Marion, Pennsylvania's Charlie Booze, Jr., muscled his way to the front and clicked off a 10.130 at 130.12 mph pass behind the wheel of the 86 Mustang belonging to Justin Fogelsonger. For round one of eliminations, Booze cruised to a win, then repeated the feat three more times until it was his name with the word win next to it on the final time slip against Jacob Lamb thanks to a holeshot. Matt Amrine of Batavia, Ohio, pushed his 98 Mustang, known as The Black Pickle, to the front of Richmond Gear Factory Stock qualifying when his 10.604 at 126.13 mph pass was the quickest of the group. Working with tuner Brandon Alsept, Amrine was chasing the championship and earned it as he wrangled his Mustang through eliminations all the way to the finals. Once there, Bart Welte got the hole shot advantage, but Amrine chased him down for the win with just a 0.007-second margin of victory. Nearly 50 car and driver pairs came out to contest the Aerospace Components Open Comp category, but Independence, Virginia-based Woody Pack was perfect when he clocked a 0.000-second reaction time and wound up qualified first. It was Jon Pickering from Troy, Ohio, however, who was the last man standing in the massive class and ran 9.431 at 125.55 on his 74 Mustang's 9.39 dial in to take the victory against Steven Daniels in the finals. After struggling through a period of red lights, Whitehouse, New Jersey's Vinnie Telesco is back on the green side of things and his 0.019-second reaction time behind the wheel of his 87 Ford Ranger in Detroit Locker Truck & Lightning qualifying was good enough to earn him the number one honors. Telesco bowed out in round two, but Randy Conway of South Rockwood, Michigan, kept right on truckin into the finals. Paired with Wade Trammel, Conway captured the event win behind the wheel of his tried and true 84 Ranger.

With a perfect 0.000-second reaction time, Rex Jamison from Carydon, Indiana, lead the way in his 86 Mustang in the qualifying order in Exedy Racing Clutches Modular Muscle. Meanwhile, Charlie McCulloch went on the attack in eliminations and too four round wins in a row on his way to the finals. There, the man from Kennesaw, Georgia, drove his 98 Cobra to the stripe where he found sweet success despite breaking out as opponent Donnie Bowles tripped the beams -0.023-seconds too soon. Roush Performance Super Stang included thirteen drivers all hoping for a little luck, but Lexington, Illinois resident Marvin Knack wheeled his 11 Mustang during qualifying to cut a 0.009-second light and topped the list. In the finals, it was Knack up against Levi Wendel. When Knack unexpectedly fouled the start, Wendel went on to win. In Race Pages Ford Muscle competition, it was David Mormann all the way from Tampa, Florida whose 70 Mustang Mach I ran dead on its index with an 11.500-second elapsed time in qualifying to score the coveted number one spot. The long drive up to Kentucky paid off for Mormann, as he earned a spot against Gary Summers in the fifth and final pairing of the weekend. When Summers left the start early, Mormann had an easy win and went home smiling. The Livernois EcoBoost Shootout qualifying order was led by Alexis Fruggiero hailing from Vero Beach, Florida as she cruised to a 9.904 at 140.37 mph elapsed time in her 15 Mustang. Fruggiero coasted into the finals thanks to a ladder bye, and when opponent Dasan Holloway had trouble and had to lift, the win was gifted to Fruggiero. Qualifying for Hellion Turbo Coyote Shootout saw eighth cars duking it out, but Quintin Martin from Papillion, Nebraska was the leader once the order had been finalized as he coaxed an 8.377 at 157.74 mph hit from his 14 Mustang. The favorite to win, Martin didn't disappoint as he won over Mike Thomas in the third and final match-up of the weekend. Meanwhile, in the King of the Hill class, pairing the top Turbo Coyote Shootout vs Terminator/GT500 entries, Keith Rhea from Derry, Pennsylvania was the number one qualifier when he ran 7.454 at 193.32 mph in his 04 Mustang. Rhea had a bye to the finals and didn't squander the opportunity to take home a Victor trophy as he put Tim Oswalt back on the trailer when he ran nearly a full second quicker to make it official. UPR Products Modular Xtreme hosted three fast Modular-powered racers, but Clint Bates from Bartlesville, Oklahoma, bested the bunch and clicked off a 5.369 at 119.10 mph hit in his turbocharged 13 Boss 302 known as The Bossinator. Bates showed why he was number one when eliminations began, as he worked his way through the rounds until he met with Sal Trejo in the finals where he took the win once again and ended the weekend on a high note. In the specialty shootout VMP Superchargers Terminator vs GT500 battle, the quickest of the bunch was Paducah, Kentucky resident Randy Thomas and his 10 Shelby. Thomas went 8.479 at 164.01 mph in qualifying to put his name next to the number one, but ultimately had to settle for the runner up spot as it was Ryan Aycock of Sheridan, Arkansas, in his 12 GT500 who took the overall win for the weekend on an 8.316 at 168.77 mph trip. The Race Pages Bracket classes were chock full o stiff competition, and it took a combination of excellent car prep and fantastic driving to make it through the rounds, but it was Adrian Way of Harrodsburg, Kentucky in his 72 Maverick who made the best of Bracket 1 when he defeated Danny Scheele with a winning 5.515 at 121.28 mph pass on a 5.52 dial in, while Jason Gregory of Springfield, Tennessee, did the same in Bracket 2 in his 91 Mustang running 6.752 at 99.45 mph on his 6.67 index over Shane Capps. For Bracket 3, Michael Stearman was the big winner when he had both the hole shot advantage and ran closer to his dial against runner-up Tim Apple.

Larry Albright was crowned king of the QA1 True Street group when the Jensen Beach, Florida-based racer averaged 8.287-seconds over the course of three passes in his 91 Mustang. Hot on his heels in the runner-up spot was Troy Eaton of Harrodsburg, Kentucky, who averaged 8.490-seconds, while Anthony Heard won the 9-second bunch, hometown hero Casey Flora took the win in the 10-second group, and Ben Webb was the quickest in the 11-second section. Other True Street winners included Mike Baker (12-second), Kevin Lynn (13-second), and Ryan Howell (14-second). Belinda Moore went on to win an unprecedented 17th True Street class win as she took home the 15-second honors. The quickest eight stick-shifted cars from QA1 True Street converged to run one more time for the special Tremec Stick Shift Shootout. The qualifying order was set off the averages acquired from the True Street competition itself, and Anthony Heard from Lakeland, Florida, hit a home run in his 99 Mustang as he had the quickest average of the bunch at 9.116-seconds. Secured in the one spot for the sportsman-style eliminations brackets, Heard held the advantage through the three rounds of eliminations and went on to take the overall win. As the champion, Heard won a transmission of his choice, valued at $3,500, courtesy of the fine folks at Tremec. Congratulations to all our winners and provisional champions, and thanks so much to everyone who either came out to race with us this year or followed along with the action in person at an event or online via the live stream. We'll see you all right back at it in just a few months for the start of the 2018 season when the NMRA Keystone Automotive drag racing series picks up again in March at Bradenton Motorsports Park in Florida!