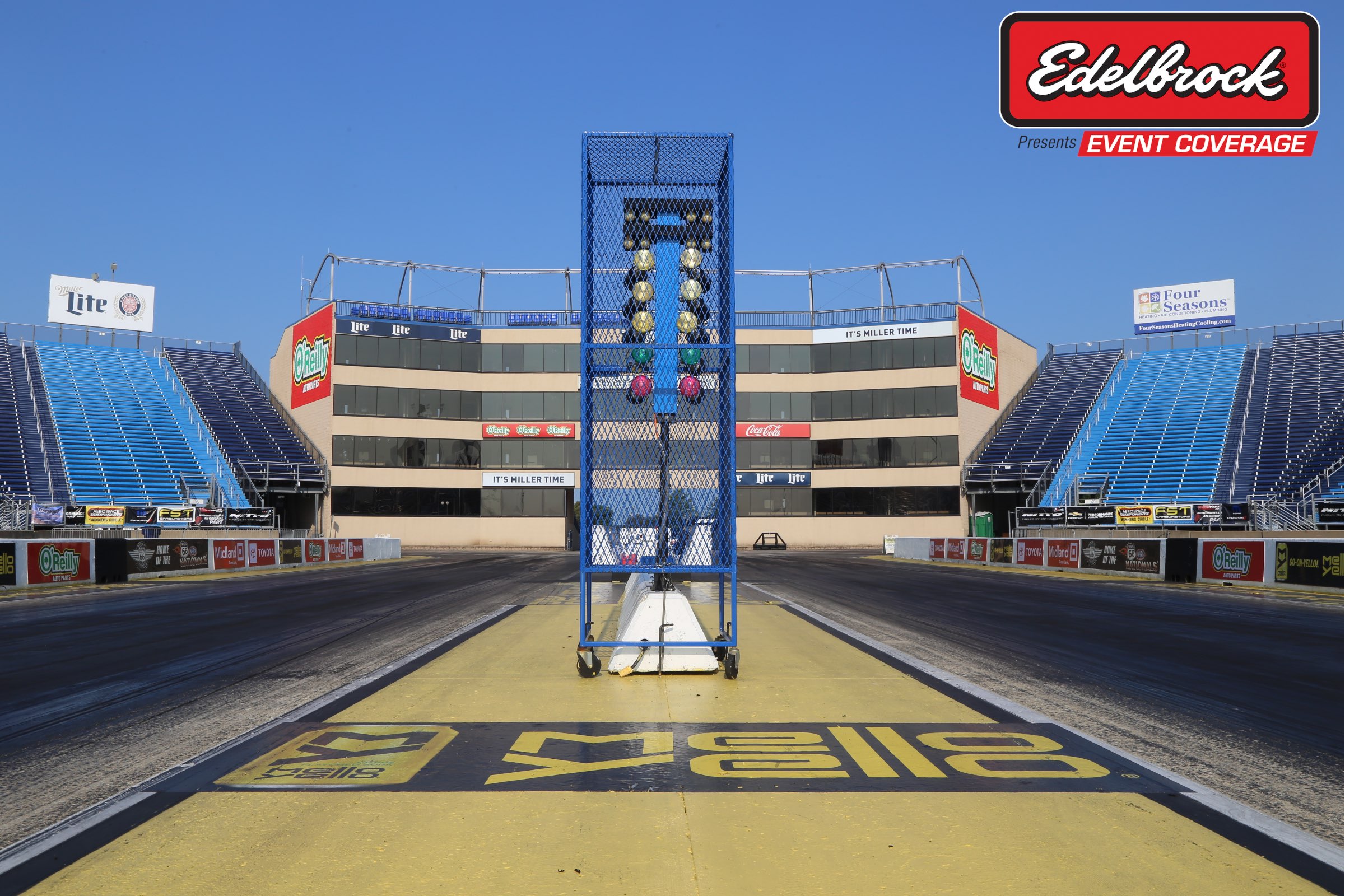 The sun is shining down on the track surface at Route 66 Raceway in Joilet, Illinois, and the time is here for the 14th Annual Nitto Tire NMRA/NMCA Super Bowl of Street-Legal Drag Racing Presented by FST Carburetors. The crown jewel of the mid-season for both the NMRA and NMRA squads, the event will see both series run in tandem with racers seeking to visit the Aerospace Components Winner's Circle and stack up points for the season's championship campaigns.

At the end of the weekend, the top guns from both series will square off in the newly christened Bob Curran Memorial Super Bowl Shootouts. In celebration of Bob's life, the Curran family is offering a $500 bonus prize to each match-race winner. As usual the winning team will walk away with the prestigious Nitto Tire Diamond Tree ring.

The action all kicks off this afternoon with test n tune runs so racers can dial in their combos before the action revs up tomorrow with the first round of qualifying, and you can catch all the action live over on SpeedVideo.com. 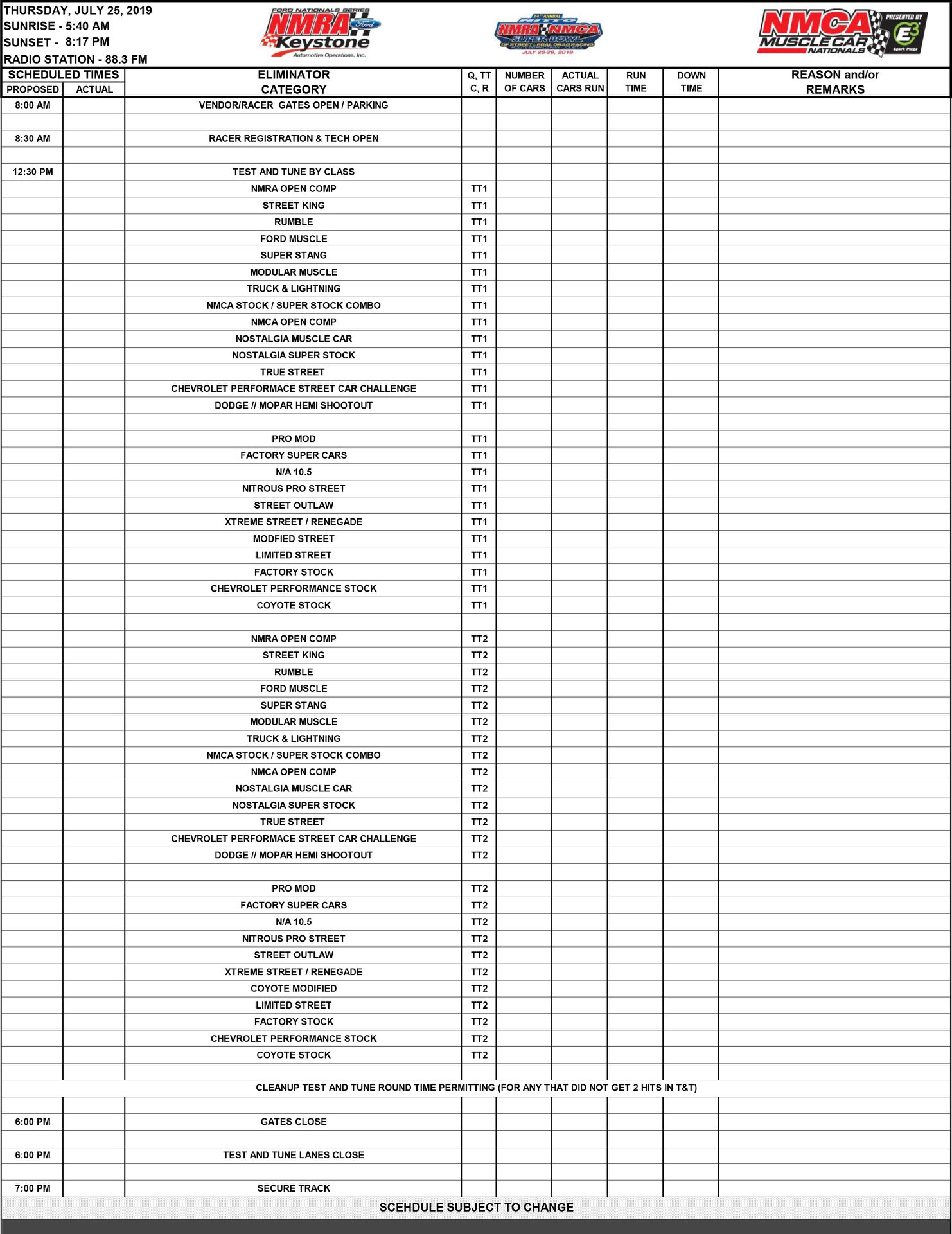 Here's how the action will go down today as test n tune runs begin with the NMRA ARP Open Comp class and wraps up with NMRA G-Force Racing Transmissions Coyote Stock. 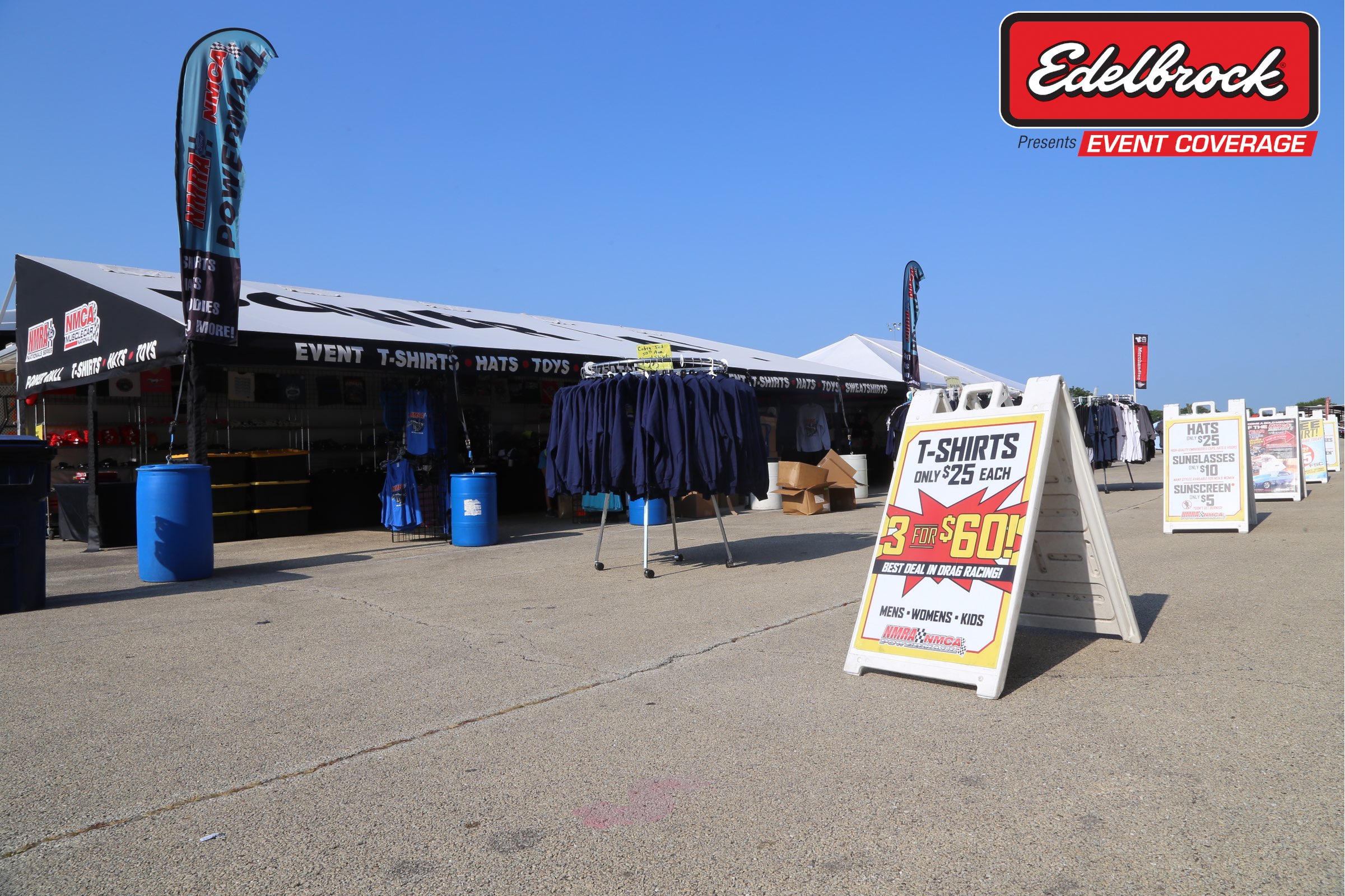 When you arrive at the race, be sure to stop by the PowerMall on the Manufacturer's Midway and pick up your NMRA and NMCA swag. 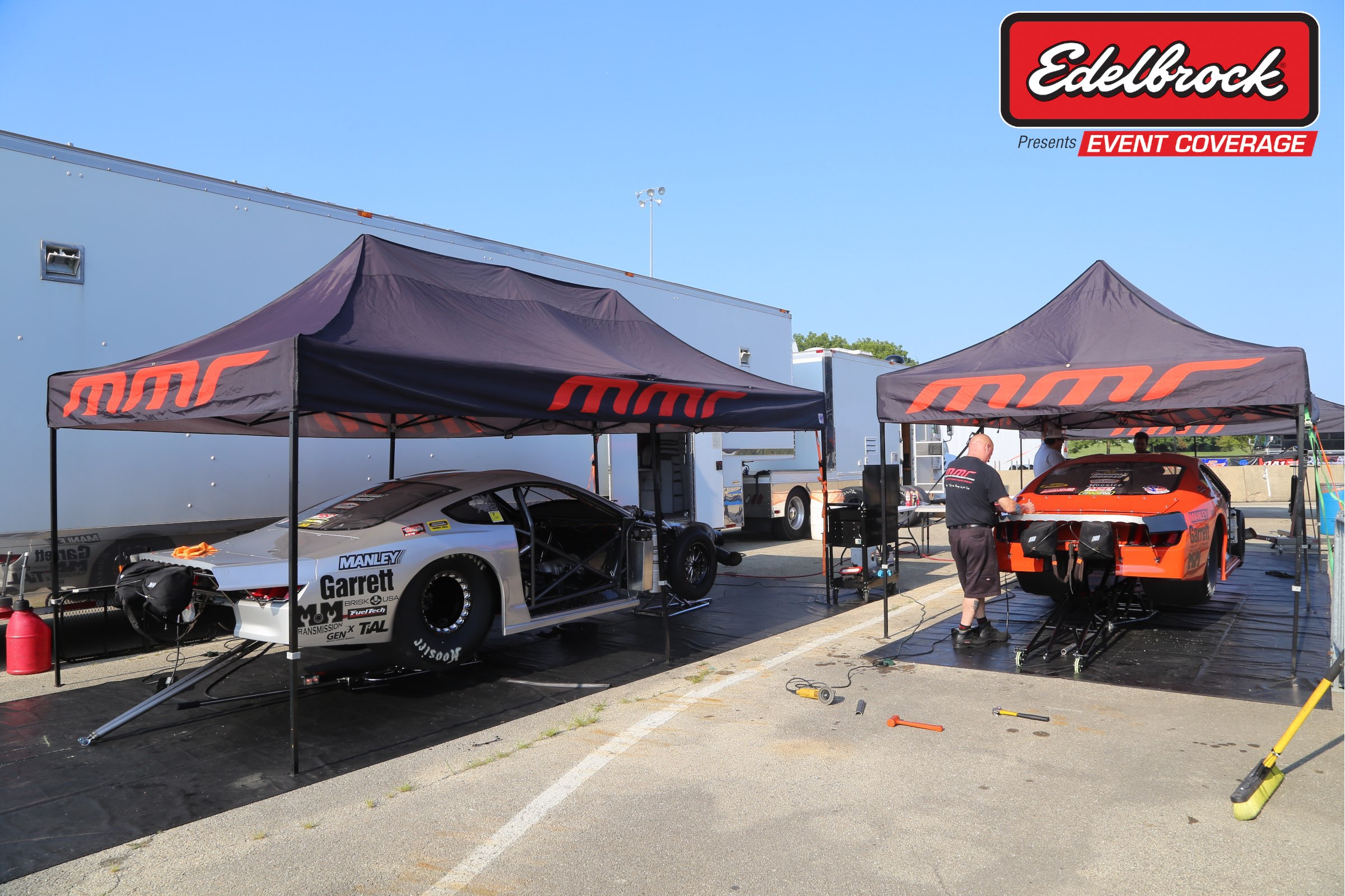 The VP Racing Fuels Xtreme Pro Mod tandem of Greg Seth Hunter and Mark Luton of MMR arrived in Joliet on Tuesday to start prepping for the race. The event serves as the perfect mid-point for the West Coast team, as its cars live out out East during the season and need regular maintenance before each race. At this point in the season, they freshened both engines, changed fluids, swapped tires, and as crew chief Jeff Blosdale told us, Both cars are happy and ready to kick ass! NMRA fans will get a special treat at the 21st Annual Nitto Tire NMRA All-Ford World Finals Featuring the Holley Intergalactic Ford Festival, as these two Coyote-powered machines will match race for the first time in front of the Ford crowd. 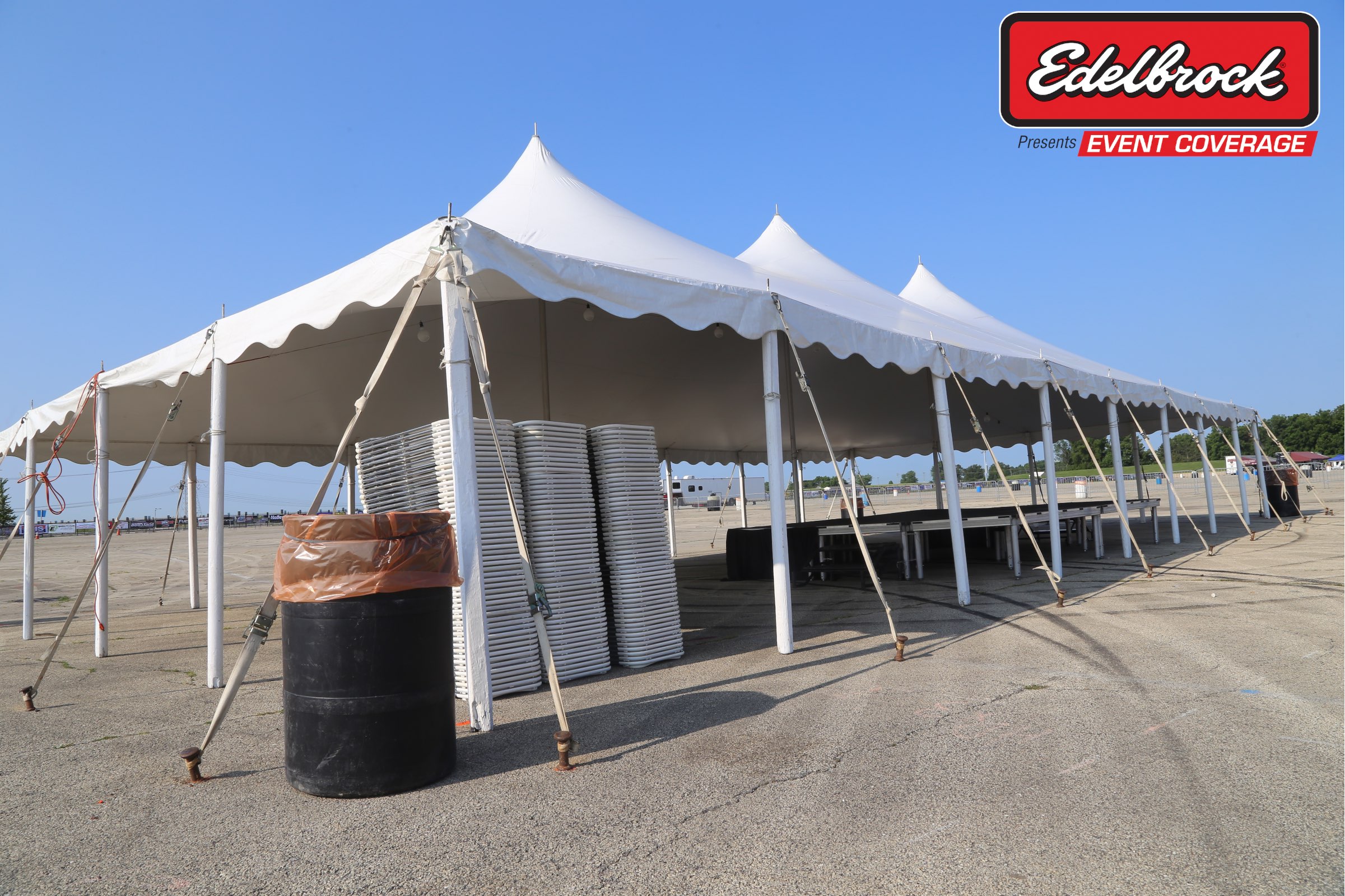 When the action winds down this evening, everyone can kick back and relax at the Nitto Tire Racer Appreciation Party under the car show tent from 5:00 p.m. to 7:00 p.m. Meet up with Nitto Tire, NMRA, and NMCA racers, crews, staff and media for cold beer, drinks, snacks and music. The party is open to everyone. 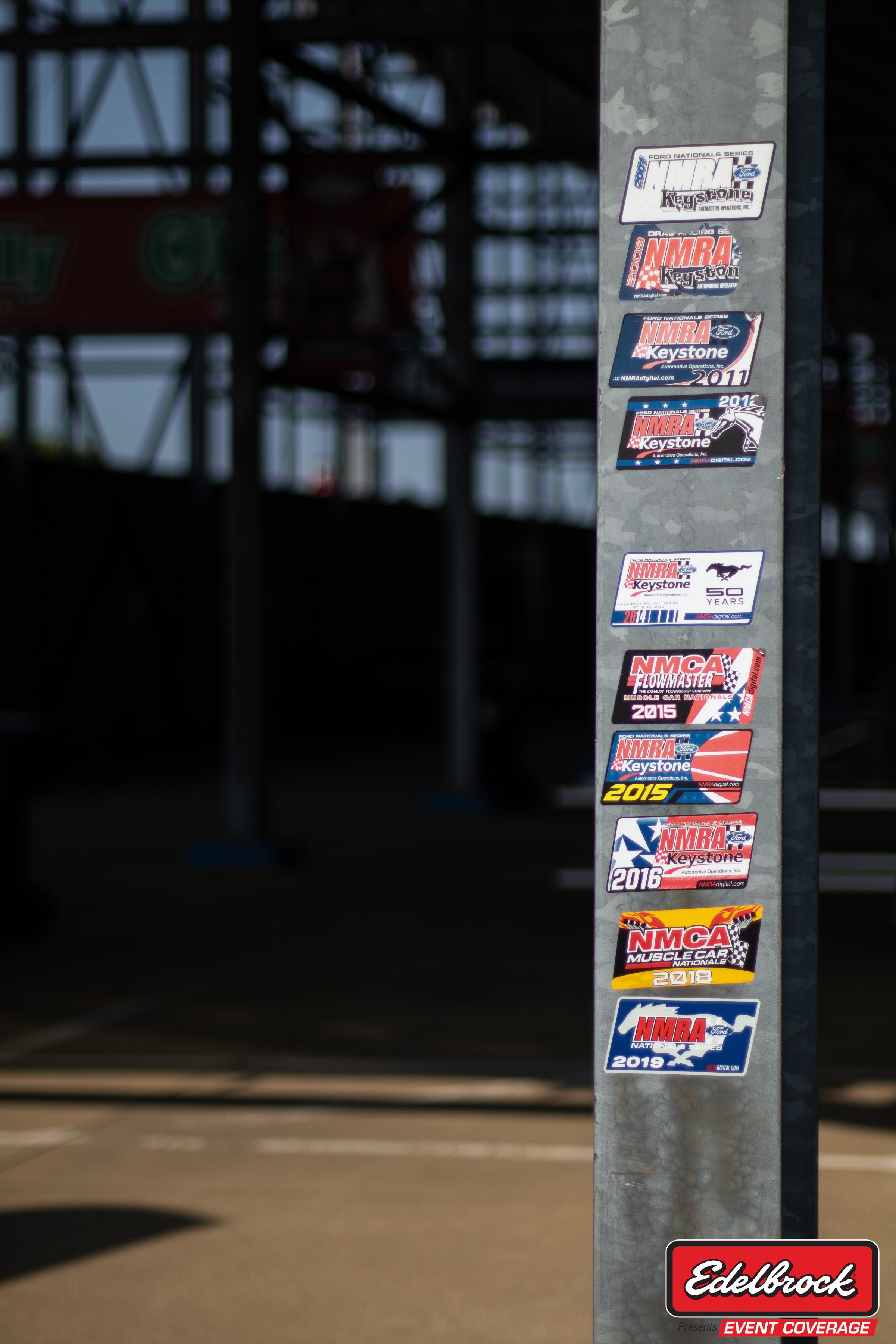 This race has a long history at Route 66 Raceway, as evidenced by this historical timeline of stickers on this support pillar that holds up the massive grandstands at the track. If you have been to the Super Bowl races over the years, this really puts things into perspective. 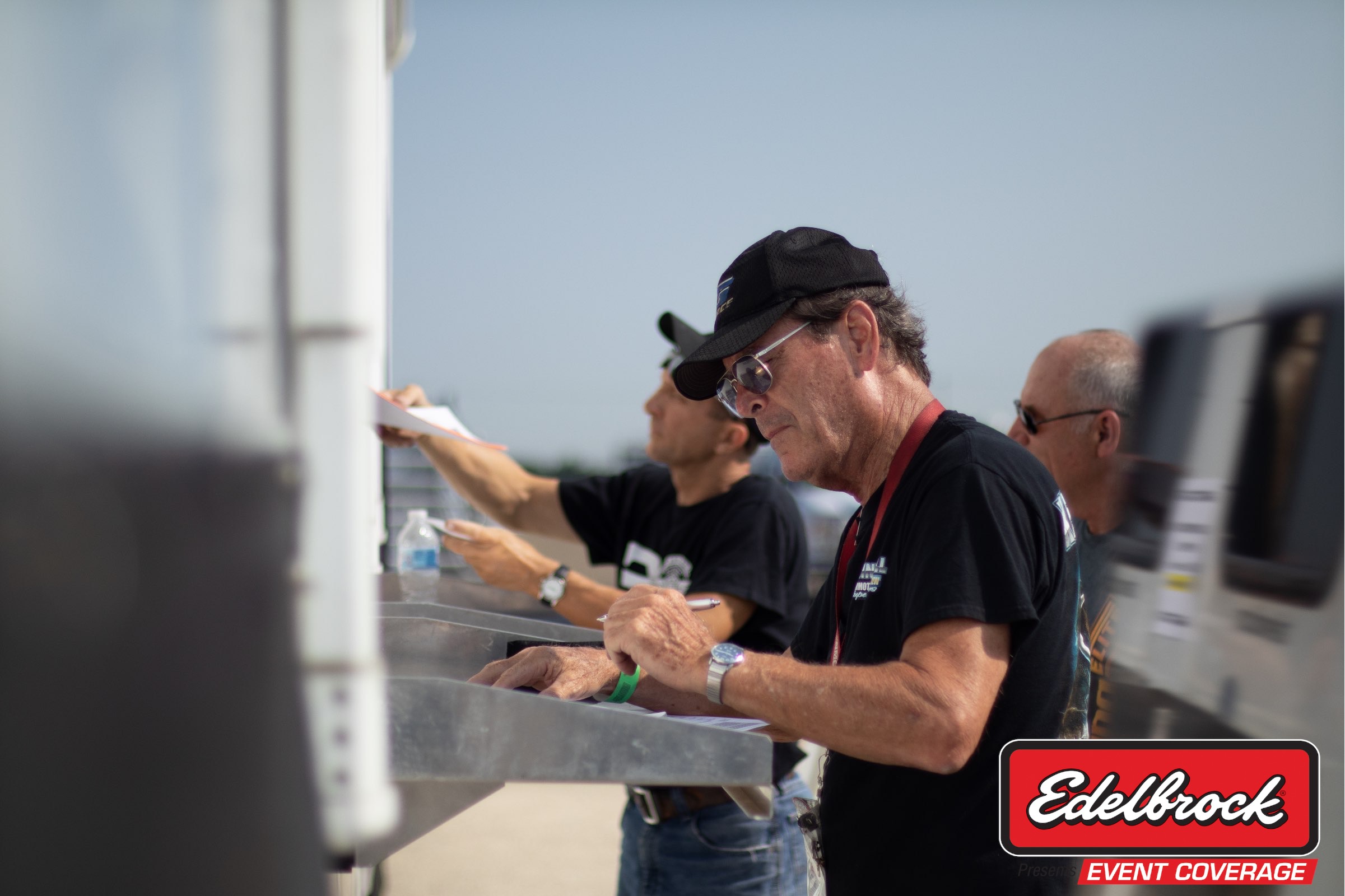 Racers were at the registration trailer early signing up for classes, with all of them setting their sights on appearing in the Aerospace Components Winner's Circle. 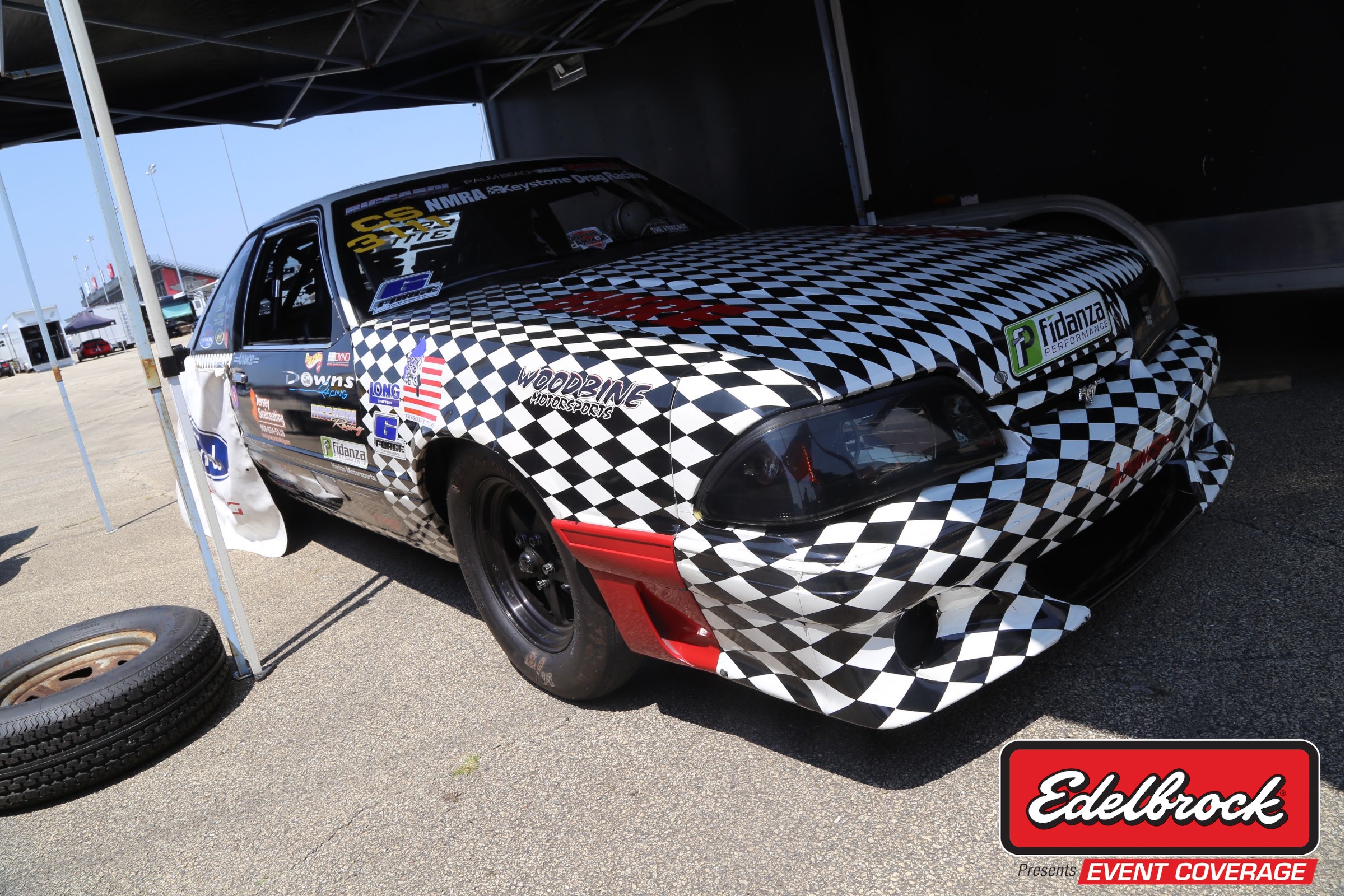 Carlos Sobrino is back out with the Joker this weekend running in NMRA G-Force Racing Transmissions Coyote Stock. He doesn't have plans to change up his combo, but his clutch is in need of some tweaking before he hits the track. 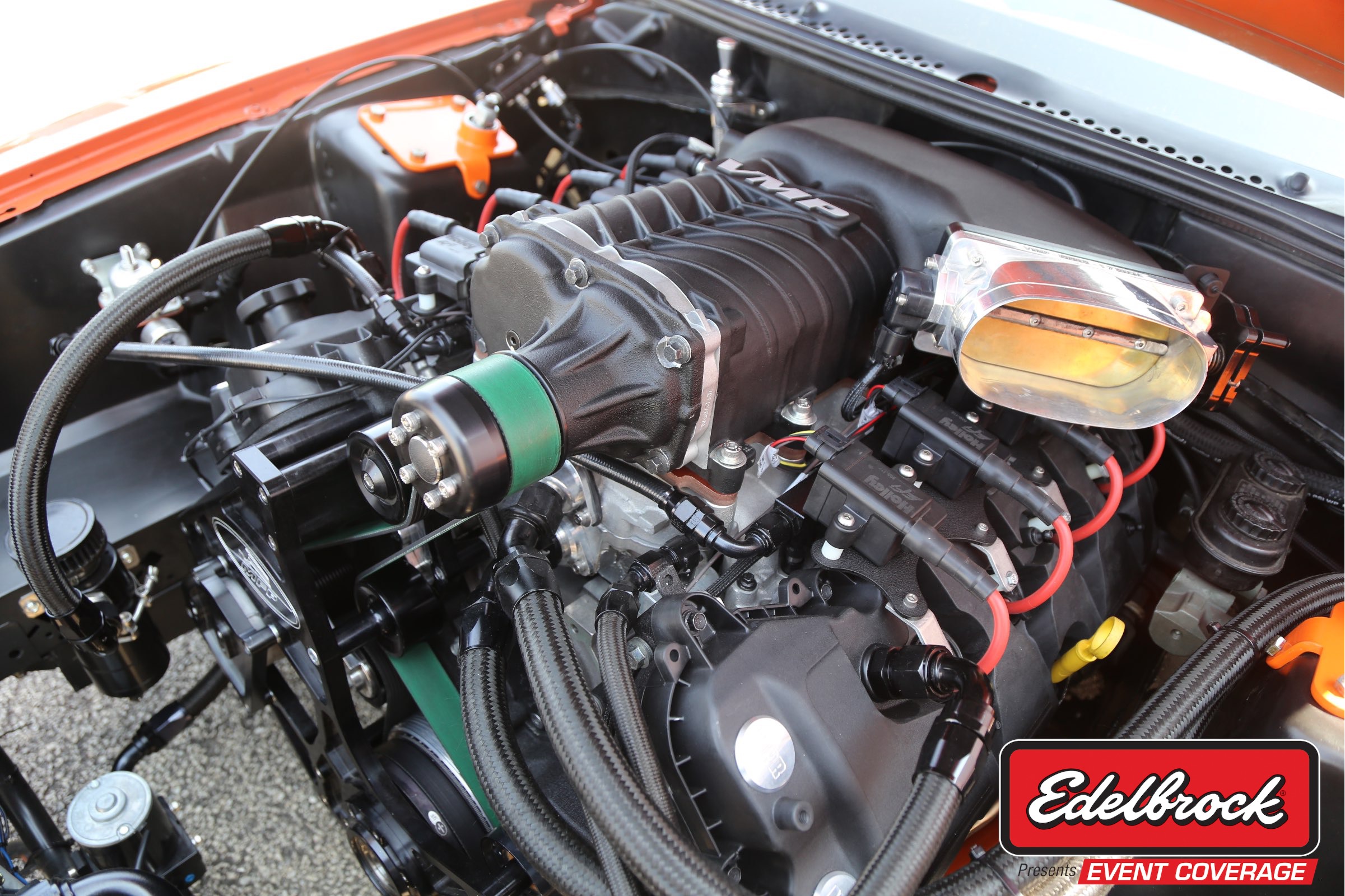 Running in Advance Fuel Dynamics Limited Street, Bill Putnam's UPR Products-backed SN-95 Mustang is experimented with a new supercharger combo this weekend. After having success in Maple Grove with the VMP Gen3R TVS 2650, he is testing out the established Gen2R blower today. If the numbers look good, they will stick with the previous-gen blower and let it ride. 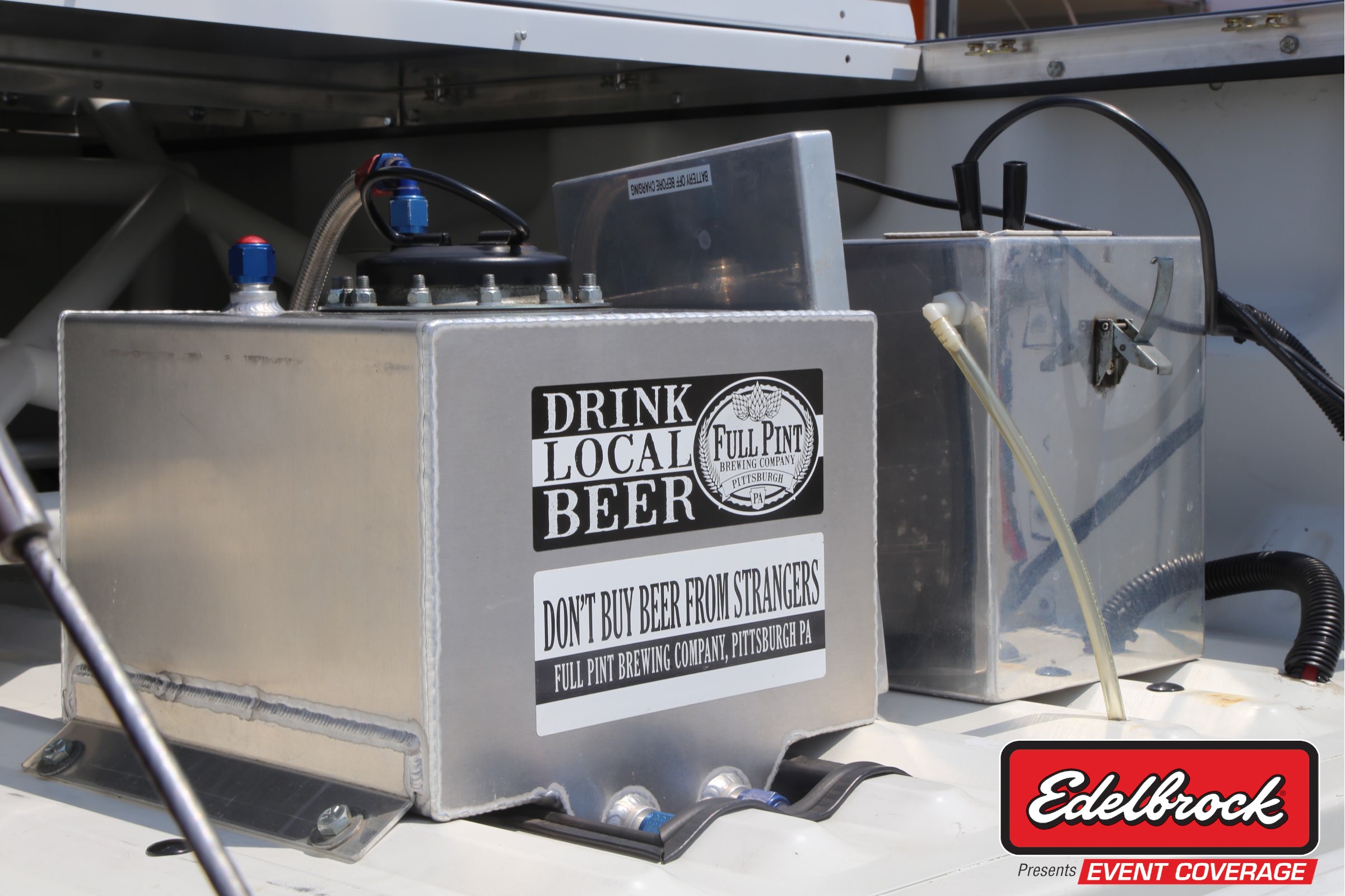 Detroit Locker Truck and Lightning racer Keith Chobirko relaxes after the race thanks to his sponsor Full Pint, which pays its sponsorship in ice cold beer. He runs a Ford Ranger powered by a ROUSH 363-cube engine, but his 15-year-old torque converter might just need replacement at the end of the season. 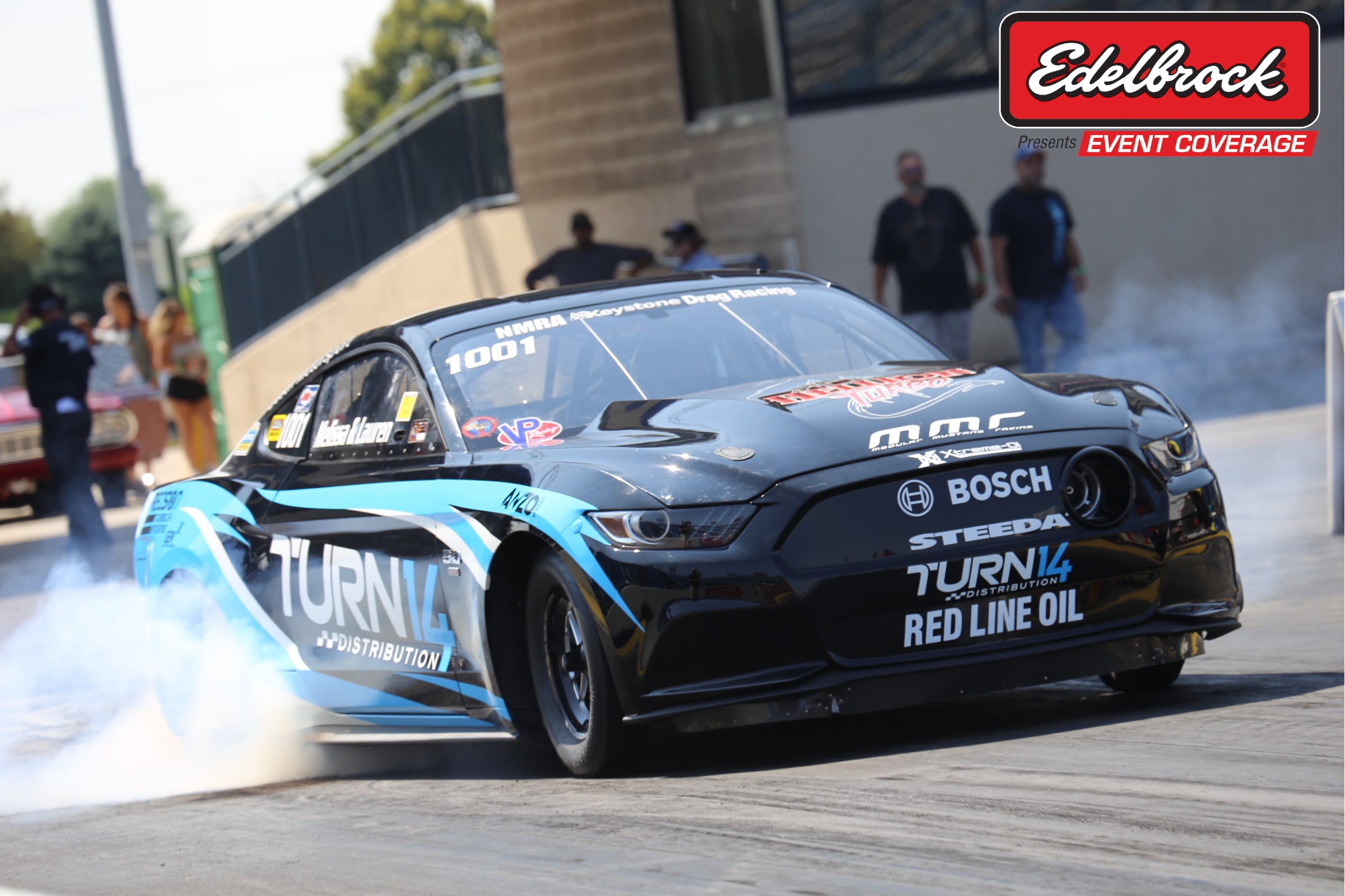 VP Racing Fuels Street Outlaw regular John Urist made a good hit in testing, but he may have hurt something on the run. It might be a long night in the Hellion Power Systems pit, but we know they will be cranking the tunes and making the best of it. 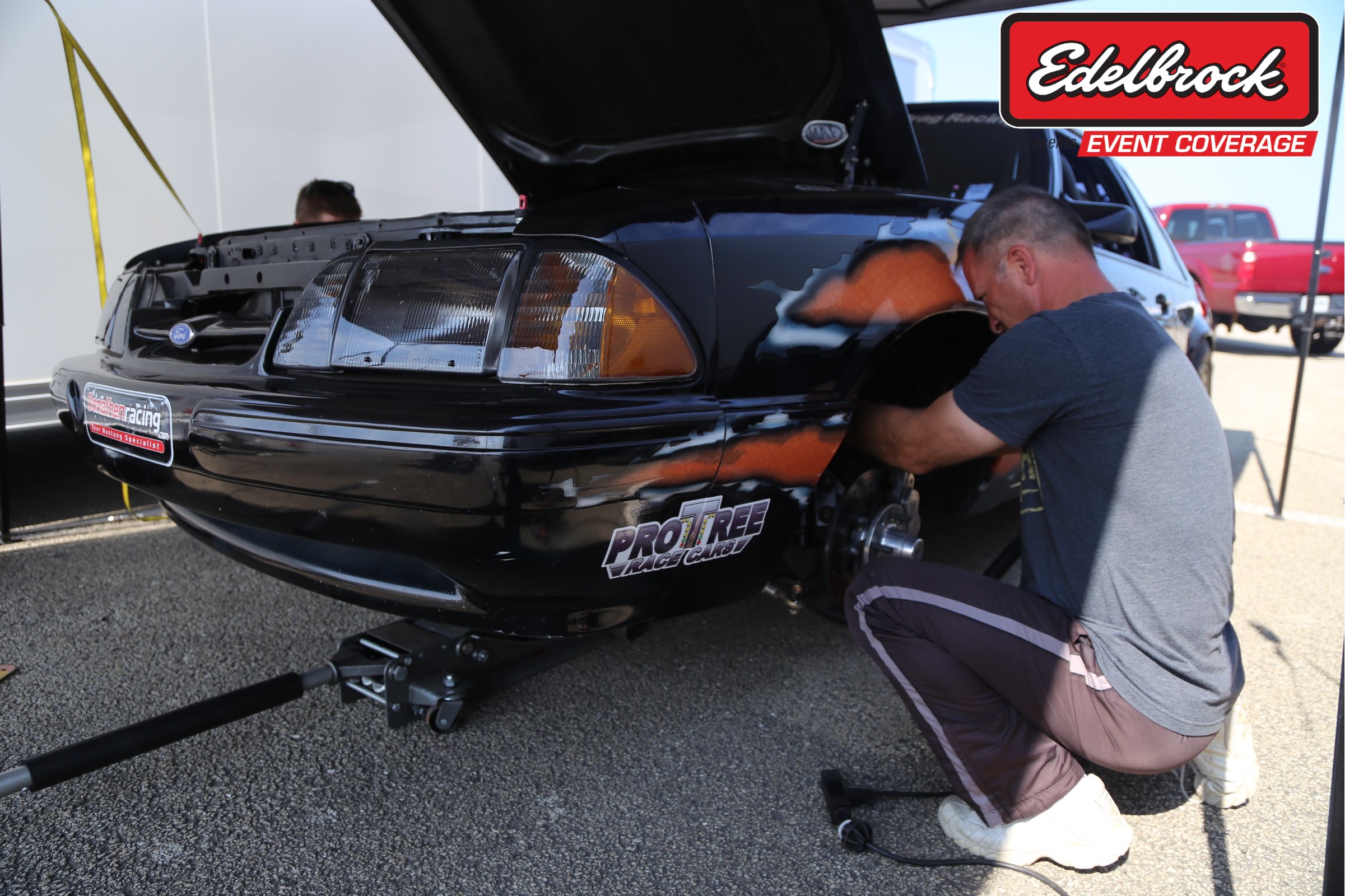 Bruce Hemminger was in the pits wrenching on Drew Lyons G-Force Racing Transmissions Coyote Stock machine. It is one of the few cars in the class still powered by a sealed Gen 1 Coyote 5.0, and the duo were working to dial in the suspension to make the most of the combo. 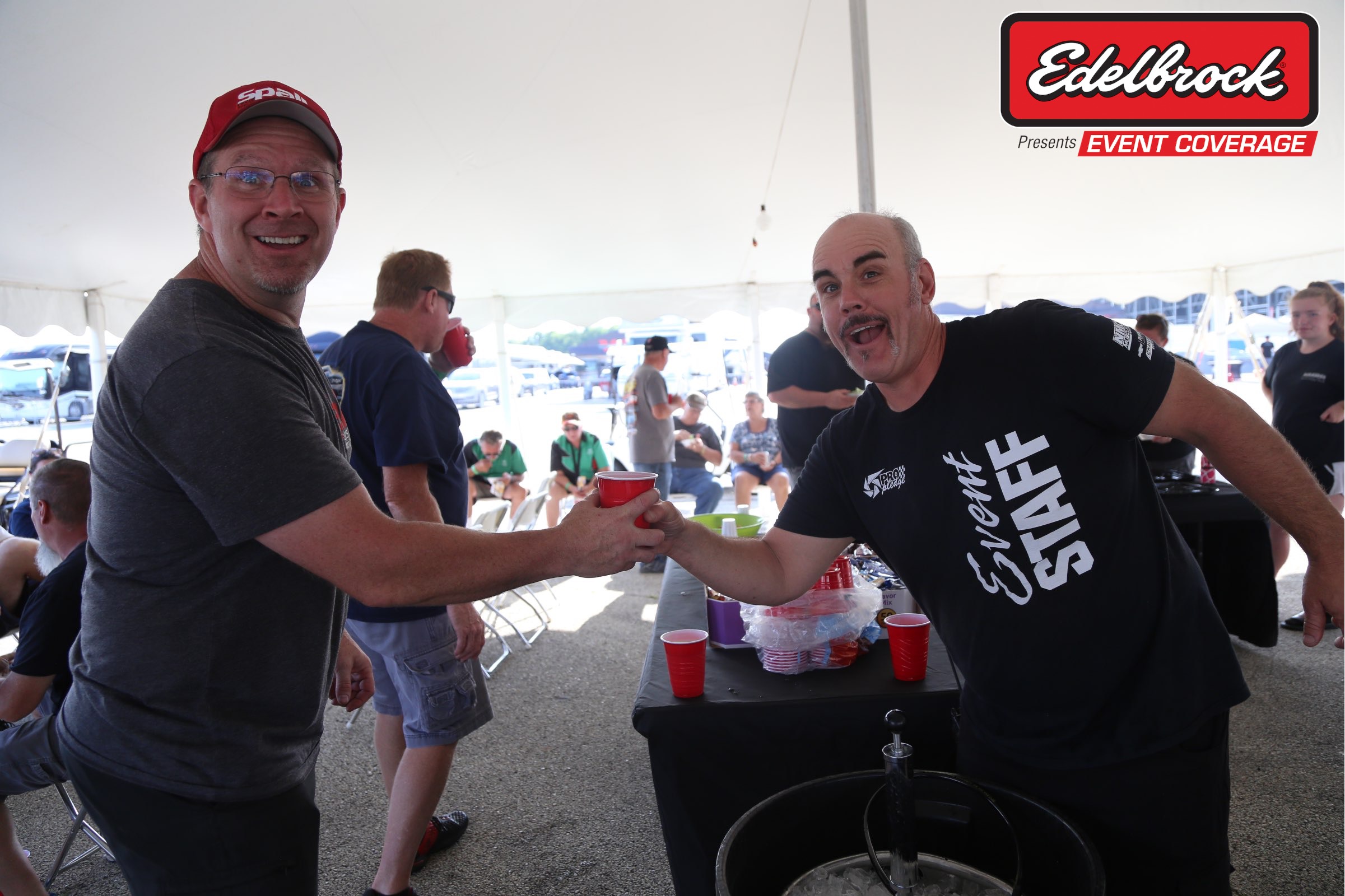 As the testing action wound down on the Route 66 Raceway quarter mile, the action heated up at the Nitto Tire Racer Appreciation Party under the car show tent. Promedia Director of Operations Chris Vopat served up ice-cold beverages to the fans and racers, while President Steve Wolcott served up snacks.