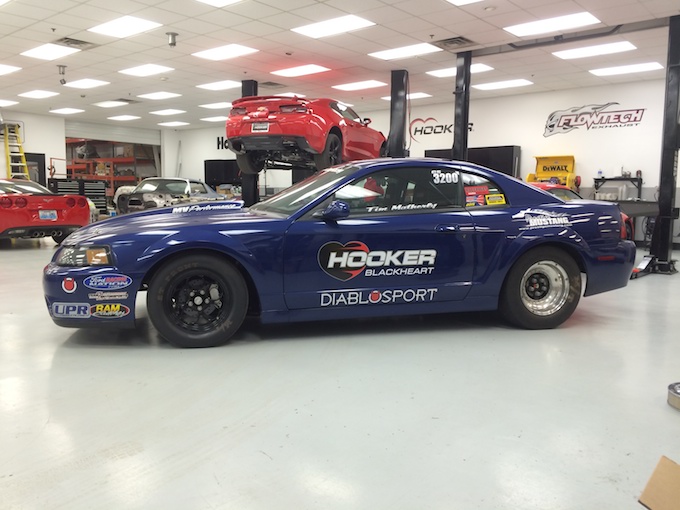 It is opening day for the 18th Annual Nitto Tire NMRA All-Ford Nationals as racers have poured on to the property and test-and-tune has begun. One of the biggest surprises is a second car out of the Bunginga camp. As owner Manny Buginga puts it, he needs to go rounds in order if he wants to have a shot at the championship. The second car is presumably a blocker and will be driven by Rich Bruder while Nick Bruder will oversee both racecars. The red coupe was raced by Dan Saitz last year and Buginga put a new DiSomma Racing 400ci engine under the cowl hood. The car sits lighter than the other VP Racing Fuels Street Outlaw rides as it sports a Precision 85mm turbocharger.

The number to watch from the above 2008 Shelby GT500 is 8.43, that is the current record for a standard H-pattern shifted racecar. Mat Bruenette of Billet Pro Shop hauled down from Canada to compete in VMP Performance Terminator vs. GT500 Shootout. Bruenette has already run 8.53 at 162 mph in testing with the VMP 2.3L supercharger on the fortified 5.4L engine. He will join several competitors in the category who are looking at the stellar track and air conditions as a chance to set a record or new personal best time.

Local racer Alan Felts made the short tow as Bowling Green is home for the VP Racing Fuels Street Outlaw racer. He just picked up the car from Jessie's Garage, a specialty fab and speed shop, where Jessie Coulter made several upgrades to the turbocharged 1993 Mustang GT. The car has gone 4.60s in NMCA competition and a number Felts is confident he will be able to top this weekend.

Pro 5.0 Returns'sort of. "Wild Bill" Devine is back home at the NMRA and he brought his Pro 5.0 machine to play. The head dude at Bullseye Power took a few days away from work to do some exhibition runs with the famous ride. He brought his trusty sidekick, Jack Werner, with him to help shine up the car. Devine had a little trouble getting a handle on the drag strip on his only run today during test-and-tune. The car left the line cleanly until a little wiggle forced him to pedal it and when he stabbed the gas, the front-end came right up and he rode the wheelie bars for a little bit before wisely pushing in the clutch.

This could be the coolest car on the property Triangle Speed Shop brought a Ford Fairmont wagon, complete with a SFI 25.3 cage, to the the NMRA World Finals. It is packing a turbocharged 5.4L Mod motor and we will have a full report on this awesome hot rod in tomorrow's coverage.