Travis Burkett to Debut in NMRA Edelbrock Renegade for 2020 Season 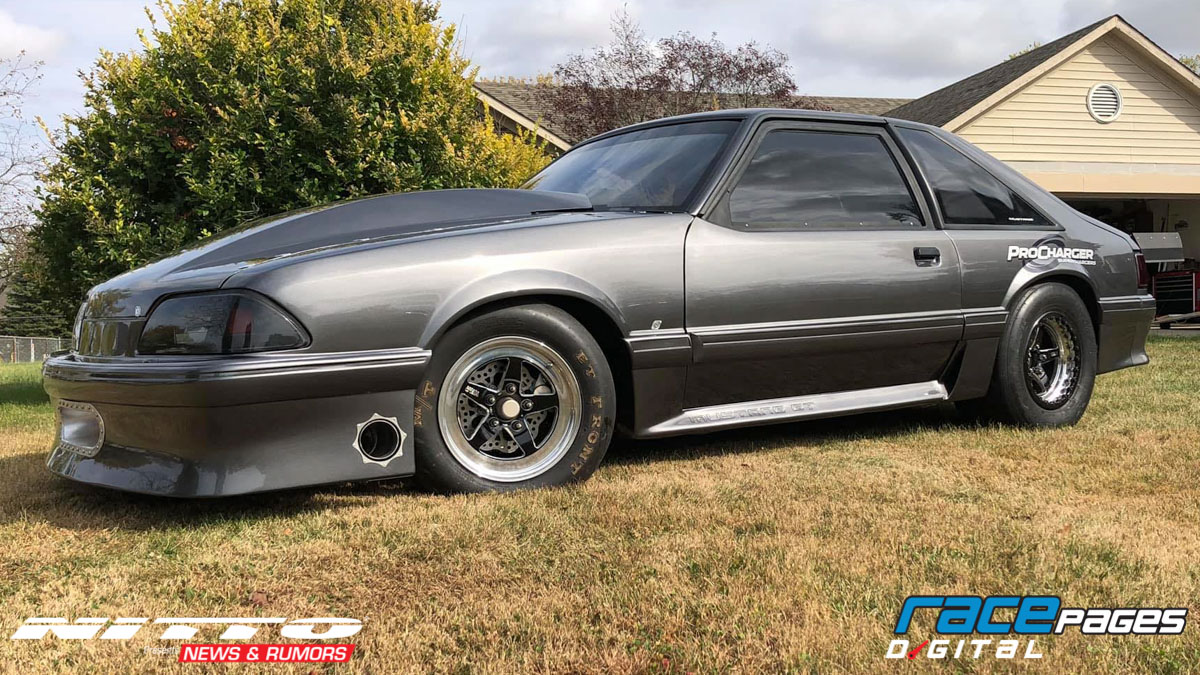 Some people like to dip their toe in the water before jumping in, and others like Travis Burkett just go full-on cannonball-style straight into the deep end instead. After dabbling in drag racing over the years, the family man from Greenfield, Indiana, is set to dive in and make his NMRA debut in the fiercely competitive Edelbrock Renegade category. In 2004, when he was 20 years old and studying at Universal Technical Institute (UTI) in Texas, Burkett purchased his current Fox-body Mustang to replace another that he had lost as a result of a bad accident. Then, I went to the track like everyone else. The bug bit me and it went downhill from there as far as upgrading goes, laughed Burkett, who only ran 16.1 in the quarter mile in 2005, but couldn't get enough of the sport and wanted to go faster after his first-ever pass. I didn't have much money, so I went the cheapest route, a 351 Windsor with a carb and eventually went 10.40.

Soon, Burkett and his wife, Angela, were expecting their first child. Knowing time was soon to be scarce, Burkett decided to tear his car apart and rebuild it so it would be faster and safer. Their son, Landon, arrived in 2011 and life took a turn away from racing. The build slowed, and it took about six years before Burkett was able to snag an 8.50-second time slip. By then, he had installed a 400ci engine and Vortech supercharger. There were some bugs, and I destroyed three superchargers in less than twenty passes, he lamented. One night, in Muncie, I got past the first round and turned it up to run against a faster car. A pulley snapped halfway down the rack, I lost the race, and decided to go with a ProCharger and a gear drive.

Around that same time, although Burkett's focus on family had strengthened over the years, a trip to the track with his friend, Justin Brockey, brought the sport back into his life in a big way. He [Justin] had a son close to my son's age, and we all went to the NMRA race in Bowling Green, explained Burkett of his first experience attending an NMRA event in 2017. I really enjoyed the atmosphere. People were willing to talk, unlike at other organizations, and I thought the Renegade class was the best because it was average people without tons of sponsorship. It was at that time that Burkett decided he wanted to run in Edelbrock Renegade as well, and he spent the next few years making it happen. Now, 16 years later after his initial purchase, he has transformed his Mustang into a race-ready machine.

Burkett made the swap to his ProCharger power adder in 2018. He hit the dyno on August 14, 2019, and was able to go testing just a few days later. He ran 8.06 at 169 mph, sat out September, made six more runs in October, then immediately set about tearing the car apart, again, to make it safer. I preach safety as much as I can. The most important thing is that my wife and son need me to come home after a race, stated the man who runs all SFI-20 safety gear from Impact Racing as well as a 10-pound fire suppression system from FireAde. Normand Boutot, who works for Morgan Lucas, hooked Burkett up with a 25.3 SFI certified chassis. He did a phenomenal job, recounted Burkett, who also worked over the winter of 2019-2020 to make his Fox body lighter with a tubed front end as well as a Racecraft Inc. fiberglass front end and doors, plus windows from Optic Armor as well as a Team Z mini-tub conversion. He had hurt his 400ci engine while on the dyno, so Burkett bought a replacement 347 ci from fellow racer and friend, Tim Donathen, to use with his F-1A-94 ProCharger. An ATF Powerglide transmission and PTC converter will enable the Fox to make use of the power its heart will put out. Burkett did the wiring work himself, including the Holley Dominator EFI system, which is tuned by his friend Brian Friedentag. We talk two or three times a week, and Brian has been a huge help, added Burkett. Out back, an 8.8 rearend is positioned between a set of Menscer Motorsports shocks and struts, as well as parts and components from both Team Z and Racecraft and grippy TBM brakes. Burkett's Mustang had been red for its former life, but mostly because his wife hated the color he had it resprayed by Landron Whittington to a beautiful Ford Sterling Metallic instead.

As the start of the 2021 NMRA drag racing season draws closer, Burkett's to do list is quickly shortening. Two Lane Performance in Indianapolis, Indiana, is completing some fabrication work while Automotion Race Cars has been hurriedly shipping parts to Burkett to help wrap things up. Burkett still has some wiring to do, as well as run some water lines and other plumbing, but then he'll be ready to fire it up and bring it over to Tin Soldiers Race Cars to get the chassis set up. Although he would ideally like to begin his 2021 season in Bradenton, Florida, with the rest of the NMRA family, Burkett knows that is probably too big of a stretch to make happen given the timeframe and the fact that he doesn't want to leave his wife and son behind. Instead, he hopes to make his NMRA Edelbrock Renegade debut at the Scoggin-Dickey Parts Center NMRA/NMCA All-Star Nationals presented by MAHLE Motorsport in early April at Atlanta Dragway where he'll also be celebrating his 37th birthday. Thanks to help from fellow NMRA racers Joe and Becki Cram, as well as his friends Justin Brockey and Kenneth Risher, Burkett feels like he's ready to make a splash and is looking forward to spending more time with his son. Landon has been the biggest help and my biggest support. He's always in the garage with me and he isn't scared of anything, said the proud father. I can't wait to race against people like Haley James, Adam Arndt, Brian Mitchell, and Becki Cram!
Edelbrock Renegade
,
Travis Burkett