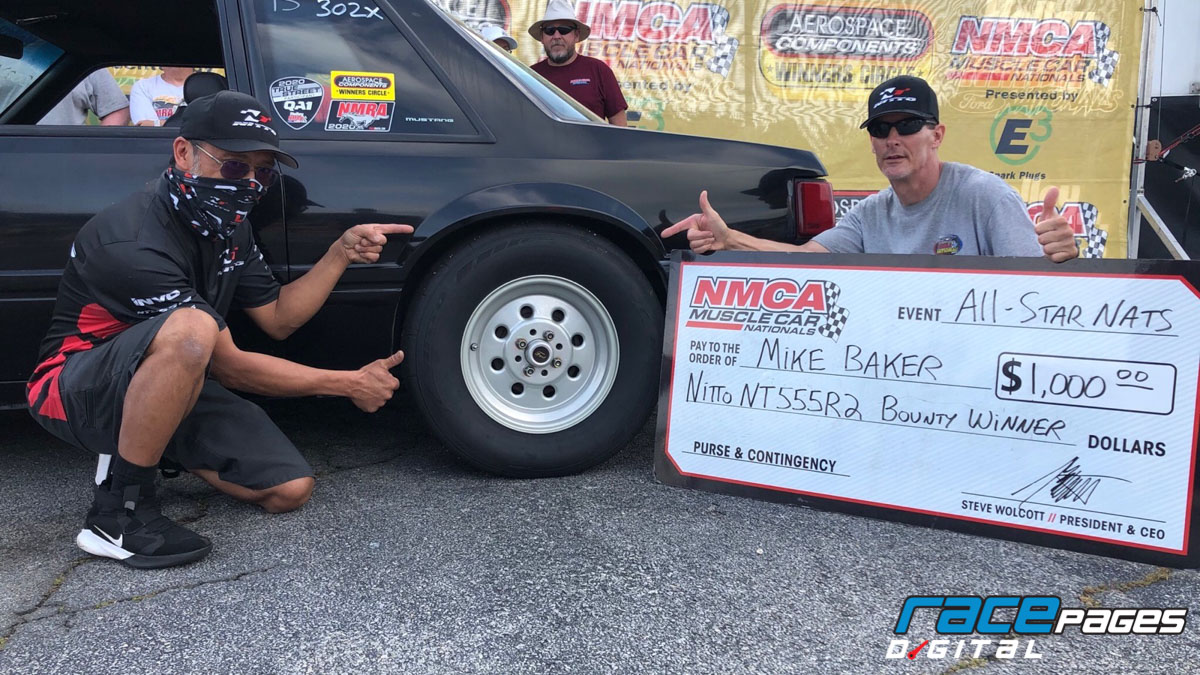 Just a few short months ago, Nitto Tire released the all-new NT555RII drag radial, which became the Official Tire of NMRA QA1 True Street for 2020. Showing its commitment to NMRA/NMCA enthusiasts, Nitto added a generous bonus program for True Street racers, as well as NMCA HEMI Shootout and Chevrolet Street Car Challenge competitors. The winners of the 9-second, 10-second, 11-second, 12-second, 13-second, 14-second, and 15-second time zones will walk away with $1,000 each if they accomplish the task on a set of Nitto NT555RII tires! Yep, the only requirement is to rock a pair of these new Nitto drag radials, which will be verified by NMRA/NMCA race officials. During the 12th Annual Scoggin-Dickey Parts Center NMRA/NMCA All-Star Nationals held at Atlanta Dragway this past weekend in Commerce, Georgia, two racers had the tires and hit the Aerospace Components winner's circle to collect the $1,000 in Nitto cash. In the QA1/TorqStorm Superchargers True Street roundup, frequent True Street competitor Mike Baker drove his 1991 Mustang to a 12.139, an 11.998, and a 11.971 for an average of 12.036 and the 12-second award. The Chesapeake, Virginia resident's Mustang was, of course, shod with Nitto NT555RII tires out back.

Baker wasn't the only one who took advantage of Nitto's generous offering, as Alan Scanlon of Spring, Texas, made the drive to Commerce, Georgia, in his 2019 Dodge Challenger and entered the Dodge // MOPAR HEMI Shootout with his HEMI-powered machine shod with Nitto NT555RII tires. Scanlon logged a 13.107, a 12.852, and a 13.227 for a three-run average of 13.062 that secured him the win and the Nitto prize money. Nitto Tire drag race manager Ron Bergenholtz was on-hand to meet the winner's and offer the payouts. The NT555RII was released April 1st with eleven sizes available immediately and dozens more coming this summer. Check www.NittoTire.com for sizes and authorized dealers near you. The Holley NMRA and NMCA fire up next at World Wide Technology Raceway at Gateway (Madison, IL) the weekend of May 28-31 for the Nitto Tire NMRA/NMCA Super Bowl of Street Legal Drag Racing presented by HPJ Performance. For more information on the NMRA/NMCA Super Bowl and all that it has to offer, visit www.NMRAdigital.com/STL
Drag Radial
,
Nitto Tire
,
NMRA/NMCA All-Star Nationals
,
NMRA/NMCA Super Bowl of Street Legal Drag Racing
,
NT555RII
,
QA1 True Street
,
Scoggin-Dickey Parts Center