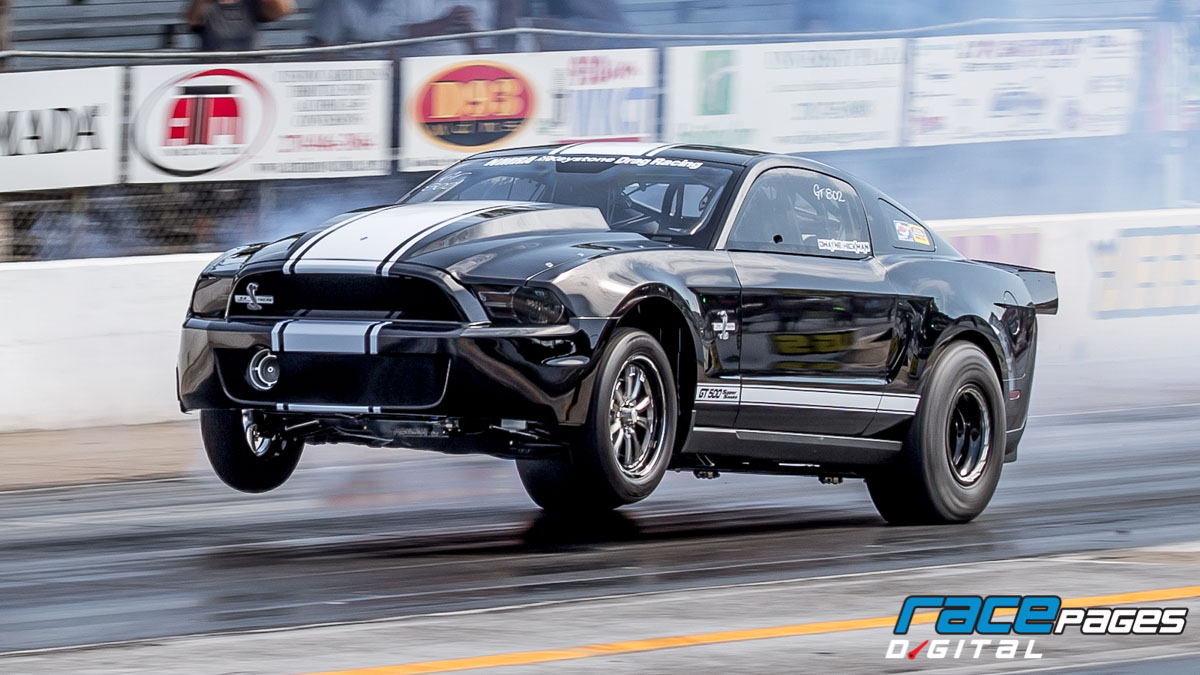 Written by Ainsley Jacobs Photography by Kevin DiOssi With an affection for Shelby Mustangs, Dwayne Hickman couldn't help adding a black-with-white-stripes 10 Shelby GT500 to his collection in early 2019. After campaigning his familiar white-with-black-stripes 11 Mustang GT500 in NMRA competition, he added its counterpart, and the serpent has already shown it packs a powerful bite. Now 53, Hickman had always been interested in going fast in style and often played around in cars/trucks outdoors for entertainment. In high school, I just drove whatever I had, usually my mom's car, he laughed of the old days. After graduating, at the age of 19, he got his first nice car a two-door 65 Ford Falcon with a 389ci engine and a three-speed on the tree. It was a beautiful car, but I had bald tires and wrecked it sliding out around a turn in the road and it went up on its side maybe if I had been going faster, I could save saved it! A few years later in 1985 when he was 22, and spurred on by his friends Mark, Randy, Scott Starcher (still his friends to this day) who owned late 60s-era Mustangs, Hickman wound up buying a T-top 82 Mustang GT with a built engine. He started racing locally, playing on the streets, and just generally having fun. Unfortunately, the good times came to a halt around 1990 when he got out of the car scene and focused on his career instead.

Based out of West Virginia, Hickman has always been involved in the oil and gas industry, and stayed busy working for other owner-operators until the early 2000s. Thanks to years of knowledge and experience, he was able to start a business of his own, and then started another in 2010, Complete Energy Services, an oilfield trucking company that specializes in moving big drilling rigs. I got back into the car scene not long after and bought a 12 Shelby to mess around with, noted Hickman, who had it upgraded with a few bolt-ons and a tune-up. I did some NMRA True Street for about a year and a half, then decided I wanted to get a car that was more suited for drag racing. Everything evolved from there, and he soon purchased a white, 5.0-liter 11 GT500 model with an automatic transmission. It was more drag-oriented, yet still streetable, and Hickman enjoyed running NMRA ROUSH Performance Super Stang during the 2015 and 2016 seasons.

Hickman's most memorable racing moment to date came while he was still racing in Super Stang, and took place during the NMRA Super Nationals in 2015 at Summit Motorsports Park in Norwalk, Ohio. I was struggling, not cutting good lights, and just having a bad weekend. I told my wife, Theresa, that we'll just have to figure out something else since this wasn't working out, recalled Hickman, who received some advice from a friend, Jeff Brabham, to just go out there and have fun. He took Brabham's words to heart, and wound up winning the entire race outright the very next day. Unfortunately, Jeff passed away the next year. When he had some trouble dialing in his 60-foot times and couldn't find anyone to help, though, Hickman was referred to Chad Epperson of London Chassis Dyno. We talked for about an hour, I made a trip down to his place [in Kentucky] and we've been good friends ever since, shared Hickman of how a chance meeting became a successful collaboration that's more than just a business relationship as the two have developed a solid friendship. Hickman had finished his 2015 season 10th in championship points, and his 2016 season in ninth. At that point, he started building a faster car and as so often happens fate stepped in to offer an alternative. He was trying to make it better and more economical for us and the build look longer than we thought and then, low and behold, the black car became available, Hickman detailed of what transpired. The car, a black 10 Ford Mustang Shelby GT500 that had run as quick as 4.62 at 158 mph, had been sitting idle in Epperson's shop for nearly two years. Previously built and campaigned by Paul Mitchell (no, not the haircare guy) it hadn't been run since the Mod Nationals at South Georgia Motorsports Park in late 2017. Paul had raced it a couple times and decided he didn't want it, so he called us and said here's the deal, explained Hickman of the generous offer. So, with one man's loss another man's gain, Hickman took ownership in May of 2019 and scrapped his previous silver project.

Originally, the car had started as a completely stock 10 Shelby GT500 which Epperson updated over the years. The 25.3 SFI certified chassis was almost identical to what Hickman wanted to acheive with the silver one, so it was a no-brainer to make the switch and get ahead of schedule. I wound up with a fully ready-to-go car that just needed some cosmetic color scheme changes, he said lightly. After Hickman made the purchase, Epperson got back to work on what was newly christened the Blacksnake. BES Racing Engines was contacted to supply the 5.8-liter modular engine, and custom-ground cams from BES were also on the bill along with fully CNC-ported cylinder heads, 11.5:1 compression MAHLE pistons, a set of forged-aluminum GRP connecting rods and a Sonny Bryant crankshaft. The engine was then topped with a Hogan's sheetmetal intake and paired with a single 88mm Precision turbocharger. For power transfer, Hickman heeded the advice and guidance of Mark Micke's M&M Transmission and PTC to spec out the two-speed TH400 transmission and bolt-together torque converter, respectively. Basically, Chad contacts whoever he's using and says this is what we got, give us what'll work and we trust our relationships to steer us in the right direction, Hickman explained of the tactic that has served him well over the years.

Underneath, the Shelby retains its stock-style suspension setup and has not been four-linked. Santhuff shocks and struts are found at all four corners, and a Racecraft Inc front K-member has also been bolted on as well as a Mike Adams-built chrome-moly 9-inch rearend with a 3.31 Randy's ring and pinion. The choice to stay with the stock-style suspension was actually an easy one for Hickman, who enjoys the variety of classes he can run with the car as a result. We like to stay with something we know how to tune. Chad [Epperson] is also my suspension guy he's better at that than he is at tuning so I can get everything in one package, continued Hickman of why he didn't want to switch it up and have to bring in a secondary suspension guy as a result. Similarly, Epperson also manages the BigStuff3 powertrain management system and chose it because of its simplicity. It works and it just does what you need, Hickman shared of the EFI option that isn't as prevalent in racing as it once was years ago, but works as needed to control the Weldon 2345-A fuel pump and Billet Atomizer injectors that dump VP Racing Fuels Q16 into the engine.

As the Blacksnake build progressed, Hickman also added a set of Weld wheels wrapped in Mickey Thompson Pro 275 drag radial rubber to encircle the Aerospace Components brakes. Finally, the Shelby was ready to shed its skin and Hickman did so by replacing the stock doors with a set of carbon fiber ones from MMR along with a matching trunk lid. Optic Armor Lexan windows were swapped in place of the OEM glass, and a few finishing touches were put on the interior including a slick one-piece, carbon-fiber dash, also from MMR. There's still full carpet and all the gauges, headlights, tail lights, and blinkers everything has been rigged up to still work, added Hickman proudly. Although conditions weren't favorable, Hickman was able to take the car out for a quick spin prior to its unveiling at the 21st Annual Nitto Tire NMRA All-Ford World Finals in Bowling Green, Kentucky. He handed the reins over to Epperson for the real debut at Beech Bend Raceway Park, though, as he was planning to drive his white car himself. There, Hickman and Epperson were both entered into the Mickey Thompson Cobra/Terminator vs. GT500 Shootout category, but a few changes had to be made before Blacksnake was deemed legal by NMRA tech namely, a radiator was put in, the fuel cell was moved, and a few other odds and ends were cleaned up. Ultimately, Hickman qualified number four with an 8.558 at 163.02mph hit in his white 12 GT500 while Epperson took the number-one spot with his 7.712 at 153.60mph timeslip in the 10 GT500.

We didn't have the black car geared for the quarter mile, so we put one size bigger tires on it and were rolling on 295/60/15 Mickey Thompsons, said Hickman, who never really ran the car all-out past the 6-second mark. It did good, but we didn't lean on it or anything and it worked well in the 100-degree heat. We got a good feel for where it needs to be in 2020. Incredibly, eliminations played out so that both Hickman and Epperson wound up in the finals to face off against one another. No matter how it played out, Hickman was a winner as they were both his cars, but ultimately Epperson took the stripe with a 7.694 at 181.15mph hit to beat Hickman at his own game by nearly a full second. Chad drove the wheels off of it, and it was a great weekend. I knew I was outgunned right from the start, but I still told Chad he better not spin, laughed Hickman who had a blast getting beat by himself, but was still a winner from the moment he pulled up to the line. Working with Epperson has been a blessing for Hickman, who enjoys the help and hustle he brings to the Snake Pit Racing team. We pit both cars together, I help pull the plugs and things like that on the black car, but the white car it's really easy, just let it cool off and hit it again, he outlined of the surprisingly easy, non-ordeal of managing two cars in the same class. We've got a really good crew, including my grandson, Gavin Black.

Although Hickman knows it's highly unlikely that he'll wind up in the finals with both cars again any time soon, that hasn't stopped him from trying. Two more races in 2019 wound up getting rained out, so Hickman sent Blacksnake back to Epperson's London Chassis Dyno for the installation of a fire suppression system and a few other odds and ends. We pulled the motor and sent it to BES for freshening up, then put a similar new one back in for now that's a bit stronger and we expect it to pick up a bit, he explained. We also may take a little weight out of the car since it's a bit heavy, maybe put me on a diet Now, Hickman is awaiting the off-season rule changes to be announced so that he can decide Blacksnake's future with the NMRA. I've always liked the [Mickey Thompson] Cobra/Terminator vs. GT500 Shootout and [Hellion] Turbo Battle classes, but didn't want to run the car clear through the quarter mile, he mused. I really like Terminator vs. GT500 and want to see more fast cars back in it since it seems to have moved to more street-oriented stuff now. A no drama, no controversy kind of guy, Hickman just wants to go out and race and have fun. He's aiming for the NMRA season opener in Florida at Bradenton Motorsports Park in March, and will return to Kentucky for the season finale, but will let the cards fall where they may to determine where he'll wind up in between for 2020 and beyond quite possibly NMRA VP Racing Fuels Street Outlaw.