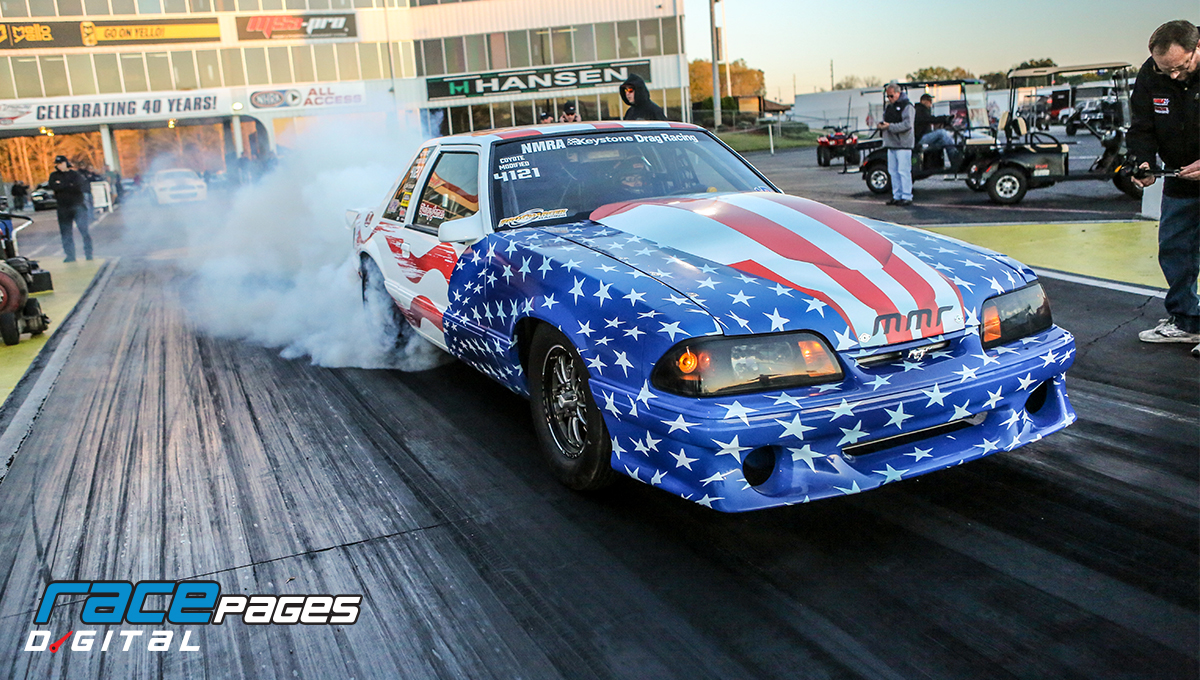 Haley James is not the kind of person to back down from a challenge. So, when the NMRA announced that her beloved ProCharger Coyote Modified class one in which she earned championship titles in both 2015 and 2018 would not be returning for 2019, James made the easy decision to start cutting on her car to ready it to run in NMRA Edelbrock Renegade instead.

In between work and attending welding school, the motivated young woman from Albuquerque, New Mexico, has been busy working in the shop with her Hellion Racing family. Her familiar Fox body 1993 Mustang underwent a major makeover, and James has had a hand in the entire process.

Over the winter, we planned a lot of weight loss for the car and we took the front end, hood, doors, deck lid, and wing off, explained James of the parts that were replaced with Schoneck Composites carbon fiber pieces instead. My dad and I cut everything out and fit it all, installed the Optic Armor windows, then it went a local body shop, StreetCustom, for the finishing.

While James and her father, Dwanye, were hard at work lightening the load, Hellion Racing B-Team cohort Frank Varela's nephew, Ivan Varela, was hard at work welding lots of chassis upgrades both front and rear. Ivan also built the turbo kit and fabricated the manifold, all using Race Part Solutions tubing, dual seal connectors, and other parts that they sent us in like, three day! added James excitedly of the quick turnaround. He basically welded a whole new front end, and it was really cool to watch it happen and to have something be created in space in the middle of nowhere.

The handcrafted kit was designed around a class-legal 76mm turbocharger from Precision, while the engine is still James's usual 5.0L Coyote that she and her father built although it's since been beefed up with a shiny new set of Traum Pistons and a few other negligible internal adjustments.

James will also still use her three-speed M&M Transmission, but the cat's out of the bag on the top-secret killer converter she had been sporting throughout 2018. Working as a data-gathering undercover test mule for ProTorque, James had been feeding Joe Rivera data about his U9 converter that had been in the development phase and now it's soon to be released to the public. This thing is really bad ass. Once we put it in, we were like, okay, we're going somewhere now! James stated confidently. It's a great unit. We tried going to other ProTorque converters, tighter or looser, depending on the air at different events and we always came back to the U9.

In addition to the chassis updates and turbo changes, James's crew also redid all the computer systems and wiring on her Fox body with much of the spaghetti being hidden under the dash. We also redid the carpet and repainted all the bars it's a lot prettier in there now, added James.

Additionally, support from Chris Groves at The Dyno Edge, who the team calls The Magic Man for his ability to always find a solution to a problem or an answer to a question, helped make the Renegade transformation possible. HPL Oils supplied oil and other fluids, Yearwood Performance provided fittings and other items, and Tommy Kundrik at Mickey Thompson supplied the front and rear stickies.

It really was an easy decision to focus on NMRA Edelbrock Renegade for 2019, since it's essentially the same as Ultra Street and Xtreme Street, so that we'll have more opportunity to go to more races and to run for big money, shared James of what spurred the decision of her big move-up. Now we can throw a big turbo on the car and go wherever we wanted. The car is right where it needs to be to do whatever we want from here on out with a steel-bodied door car.

With the engine officially fired up for 2019, James's winning Fox body is heading over to Vegas Custom Graphics to be re-wrapped in the same American flag-livery that she's been sporting for the past few seasons. Once the stars and stripes had been set, James fully intends to come out swinging at the NMRA season opener in Bradenton, Florida, in March and see if her hot rod will kick some ass.