The Whipple Superchargers NMRA All-Ford World Finals presented by Competition Clutch & Holley Intergalactic Ford Festival kicks off today with a test and tune session for racers. Of note, the NMRA event staff has altered the run schedule to account for the inclement weather coming on Sunday, and the plan is to finish the race by Saturday evening.

Longtime racing photojournalist Paul Rosner is here with his family, as they regularly race in the NMRA's QA1 True Street category. This weekend, Rosner plans to enter his 2012 Boss 302 Mustang in the Autocross instead, while his son Daniel will contest True Street in his own Mustang.

Shane and Teri Isaacs are on the property with their pair of 1993 Mustang SVT Cobras. Teri will be piloting the red one, with its 8.2-deck, twin-turbo small-block Ford turned down to keep her running around 8.50s in the quarter-mile. Shane will be behind the wheel of the Teal machine, which also packs an 98.2-deck heigh SBF, but with a single 80mm turbo. Dennis Hilliard, formerly of Central Coast Mustang, is enjoying his retirement by traveling with his wife Diana to NMRA races across the country. Their trek is no small feat, as the Colorado-based couple uses a slightly closer Missouri residence to bounce back and forth between races. Dennis is looking to go after the stock Coyote NA record down the road, with an MMR powerplant coming, but this weekend he'll be racing in QA1 True Street and HP Tuners Super Stang.

Kevin McMullin added a new sponsor to the flanks of his G-Force Racing Transmissions Coyote Stock SN-95 in the form of Penguin Chillers. The company produces high-efficiency heat exchangers, including the unit McMullin uses on his race car. He says it can drop engine temperatures from 140 to 40 degrees in under 10 minutes thanks in part to the unit’s large capacity. He says it is also worth a little bit of power, but the key benefit is much more consistent engine temperatures, especially as the car goes deeper into eliminations. It works so well he doesn’t even use fans on the engine between rounds anymore.

It was only a matter of time before we saw electric vehicles in competition, and Jeff Zissulis knows all about them. His company SKYCHARGER specializes in bringing electric vehicle charging solutions to businesses. He brought out his new Mustang Mach-E GT Performance Edition to compete in the Holley Grand Champion class this weekend. This is the top-performing Mach-E model, which sports  480 horsepower and 634 lb-ft of torque. Zissulis is an enthusiast who owns gas and electric cars. “This is not about us versus them. I am just a car enthusiast embracing new technology,” he told us.

Even though he pilots a Fairmont surf wagon in G-Force Racing Transmissions Coyote Stock, Tim Donathen wasn’t expecting beach weather this weekend in Bowling Green, so he had swapped gears in anticipation of cooler temps. Given the warm weather, he was swapping gears again to adjust to the weekend’s conditions.

An exciting new addition to the Holley Intergalactic Ford Festival events this year is the Off-Road experience. Along with letting participants get dirty on the course in their off-road machines, this event will see Vaughn Gittin Jr. and Loren Healy rip around the course in their Ultra 4 Ford Broncos as well.

Randy Soper is following the math this weekend. He needs the numbers to slide his way so that he can move up into the second spot in the G-Force Racing Transmissions Coyote Stock points standings. Winning the race would certainly help his cause, and he added taller front tires cut down on the chance of red-light starts. 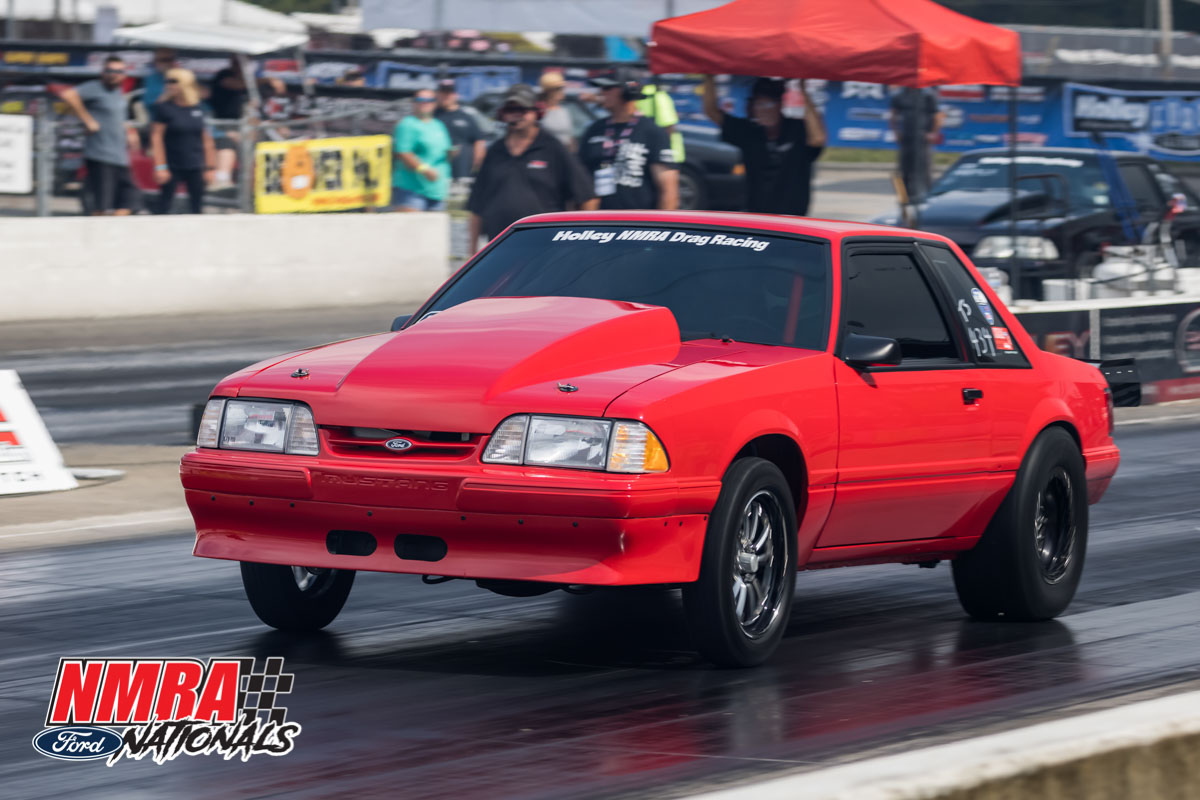 PJ McMillan of South Lyon, Michigan, is testing the NMRA waters for the first time with his mid-8-second Fox-Body Mustang coupe. McMillan had an S550 Mustang, but decided he wanted something a little more race and reliable, and traded for this super clean notchback. It packs a D&D Performance-tuned, 363ci, Dart Iron Eagle engine combination with an 88mm Werk turbocharger. At 12 psi, the powerplant made over 900 horsepower, and it's turned up a bit from that for this weekend's QA1 True Street class.

A new driver in G-Force Racing Transmissions Coyote Stock this weekend is Matt Fint, who made the move up from Factory Stock in his SN-95. Partial credit for the change goes to Jacob Lamb for being a bad influence. Lamb said Fint should “buy a sealed engine and be done with it,” and that’s just what he did.  After thrashing on the car for two weeks, he fired the revamped ride up last Saturday. His goal is to run a 9.99 and drive it back on the trailer. VP Racing Madditives Street Outlaw driver John "Fireball" Urist did his best drift impersonation during today's test session, but will hope the track comes around later for another hit. His S550 Mustang sports the only direct-injection engine in the class, and Urist uses Bosch Motorsports fuel injection to tune it. Dan Saitz (left) was fighting some Loctite thread locker while trying to disassemble his supercharger drive for a gear change, but eventually a little heat and some impact gun force broke the fastener free. A frequent Drag Week competitor, Saitz converted his car over the Edelbrock Renegade specs and recently competed at the Super Bowl event in St. Louis and made it into the late rounds of competition. Saitz' father, Jim, also does a bit of racing in a Fox-Body  that features a turbocharged Coyote good for mid-8-second ETs.

Daniel Rosner was on a good hit in his new-edge Mustang, but coming down from the wheelie knocked the exhaust loose. His father, Paul, got to work making that repair while Rosner told us about the 5.4-liter engine he built for the car, and the prototype ProCharger that he is running. Thin Mint, as he calls the car, has run a best of 8.69.