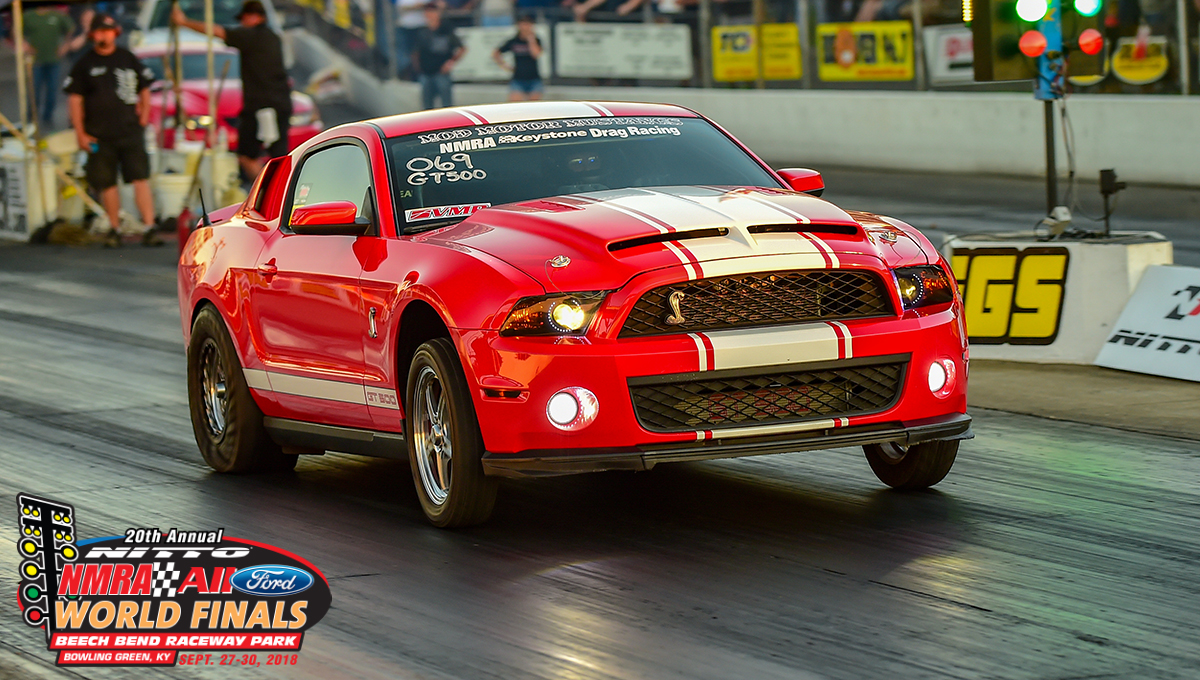 It is the annual battle for SVT supremacy as the legendary SVT Cobra takes on the Shelby GT500 in a contest you won't want to miss. The Cobra/Terminator vs. GT500 Shootout at the NMRA Nitto Tire All-Ford World Finals happens at Beech Bend Raceway over the weekend of September 27-30, 2018 and this year. WELD Racing has picked up the title sponsorship and is sweetening the top prize with the addition of a set of Weld wheels worth over $4,000! Combine that with the winning prize and the Shootout winner could walk away with over $5,000 in purse, contingency, and wheels. Last year, Ryan Aycock pushed his gorgeous 2012 Shelby GT500 into the Aerospace Components Winner's Circle at the NMRA All-Ford World Finals with an impressive string of 8.30 runs. This past March, Paul Hardcastle scored a win for the Cobra crowd with his Terminator as he pushed his steed to 9.30 runs at over 150 mph. Will the GT500 crew walk away with the glory and a set of WELD Racing wheels or will the Cobra group sweep the pair of shootouts in 2018 The Cobra/Terminator vs. GT500 Shootout is open to any stock-appearing, VIN-verified 1996 to 2004 SVT Cobra or 2007 to 2014 Shelby GT500 with a 4.6L, 5.4L, or 5.8L Modular engine. The OEM chassis must remain but the popular bolt-on modifications are permitted along with any street or race style rear tires. About NMRA Brought to you by Keystone Automotive, NMRA is the biggest and longest running all-Ford motorsport experience. The NMRA Nitto Tire All-Ford World Finals, September 27-30, 2018, is the closing chapter for the 2018 season with championship drag racing and specialty shootouts taking center stage at one of the most historic drag strips in the country, Beech Bend Raceway in Bowling Green, Kentucky. On top of the intense VP Racing Fuels Street Outlaw, Edelbrock Renegade, and ProCharger Coyote Modified categories are the ZP Performance Steering Outlaw True Street, WELD Racing Cobra/Terminator vs. GT500 Shootout, TREMEC Stick-Shift Shootout, Hellion Turbo Coyote Shootout, and the world-famous QA1 True Street. Adding more fun to the on-track competition, NMRA hosts a massive Saturday/Sunday Car Show, sponsored by UPR Products, and also a Manufacturers Midway with over 40 of the hottest names in the aftermarket business. For More Information: www.NMRAracing.com/KY or Call 714-444-2426 About WELD Racing Founded in a Kansas City garage in 1967, WELD was the result of a relentlesss pursuit of speed, durability and safety. Highly successful Sprint Car driver Greg Weld was unable to find the right combination of strength and performance in wheels that were being made, so he decided to make his own. Fifty years later, a lot has changed but the values of WELD remain. Our production facility is less than a mile from Pappy Weld's Speed Shop where Greg's race cars were built, and his passion for performance continues to fuel the company today. Innovation lives on in our industry leading products and relentless pursuit of speed and strength. In 2014, WELD acquired CCW, a sports car wheel company founded on the need for a better road racing wheel. Today, CCW is known as a leader in forged road race and tuner street wheels. WELD became a manufacturer of carbon fiber wheels in 2015 through the acquisition of off road carbon wheel pioneer, HiPer Technology. WELD was able to develop HiPer into a diversified provider of technology based performance wheels across a wider range of ATV and UTV customers. In early 2017, WELD merged with the MOMO Automotive Group to form one of the industry's largest high performance and motorsports powerhouses. For More Information: www.weldwheels.com
Nitto Tire
,
nmra
,
WELD Racing