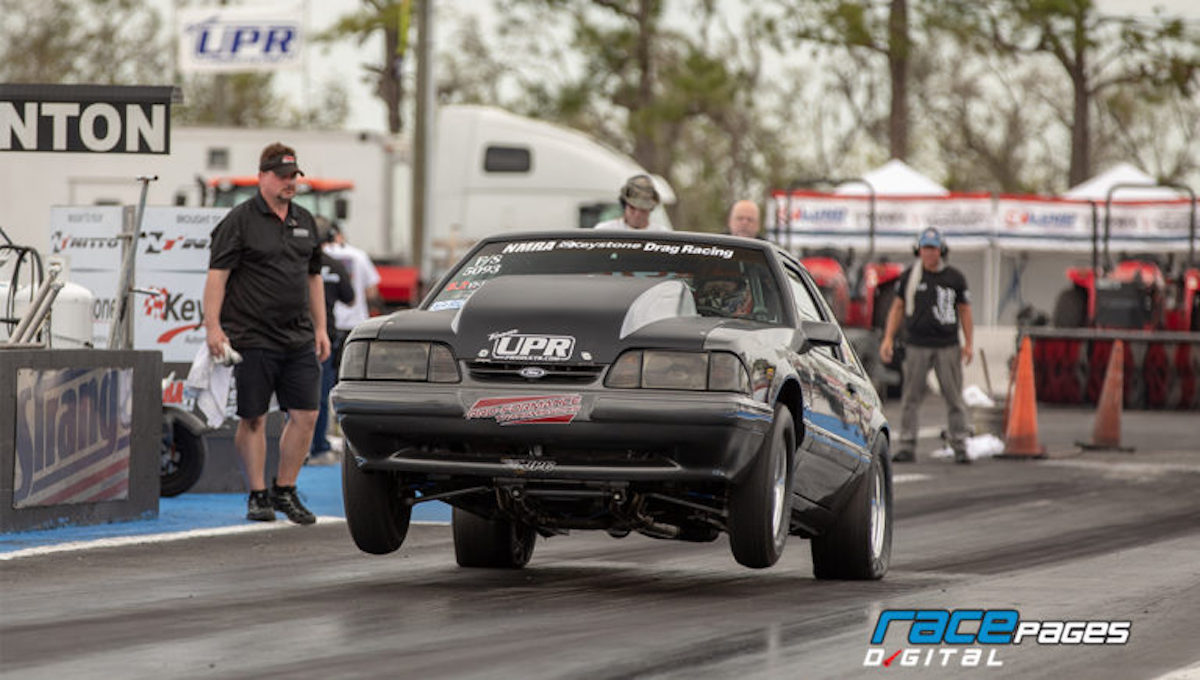 Photos by Kevin DiOssi and NMRA and courtesy of Gary Windsor

At last year's season-opening event, the 24th Annual Nitto NMRA Spring Break Shootout in March at Bradenton Motorsports Park in Florida, Windsor wheeled to a 10.54 to qualify in the fifth spot in the car with a stock Coyote engine, C4 transmission by Frank Lupo's ProFormance Transmissions and a Dynamic converter.

While he was pleased with that elapsed-time, he was looking to pick up further, and made some changes before the 10th Annual NMCA/NMRA All-Star Nationals in April at Atlanta Dragway.

I went to a taller gear in hopes of getting the car to 60-foot better, but it wound up making the converter tighter, which hurt the 60-foot, said Windsor, whose crew chief is X275 and NMRA VP Racing Fuels Street Outlaw racer Ryan Hecox.

Windsor promptly went back to the season-opening set-up and headed to the 18thAnnual NMRA Ford Motorsport Nationals in May at Maple Grove Raceway in Pennsylvania, but before he had a chance to see what the car would cruise to, he had a spark plug failure, and pieces from the spark plug were scattered throughout the engine.

Thankfully, (Michael) Washington had a spare sealed Coyote engine lying around, and I drove from Maryland to New York to pick it up, said Windsor. After I put it in the car and replaced its factory intake with the 2018 intake that I had been running because it moves air better, I went testing and it was taking a while for everything to come together. I skipped the NMRA races in Ohio and Illinois.

But by the time the final NMRA event of the season rolled around, the 20thAnnual Nitto Tire NMRA All-Ford World Finals in September at Beech Bend Raceway in Kentucky, Windsor had the car dialed in. There, he drove to a 10.54 to qualify in the seventh spot.

I was happy during qualifying and I had high hopes of going rounds, said Windsor. But before the first round of eliminations, the car was popping and banging, and I was literally trying to figure out why while I was in the staging lanes. Unfortunately, I slowed down and lost.

Upon returning home, Windsor, who wanted to race in the All Motor category at the World Cup Finals  Import vs. Domestic event in early November at Maryland International Raceway, worked with JPC Racing to make sure that whatever was wrong at the NMRA event in Kentucky was remedied.

We had the car on the dyno at JPC and we discovered that the O2 sensors were bad, so that explains why it was running the way it was running at the NMRA event in Kentucky, said Windsor. So, we took care of that and in the process, we went from the 2018 intake to a Boss 302 intake and larger injectors and we changed fuel from C10 to methanol, and we picked up good power.

While Windsor declines to share horsepower numbers, he added that they also pulled weight out of the car before heading to a test session at Maryland International Dragway, where he put a 9.91 at 133 mph on the board.

It was my first 9-second pass in the car that I've been in for three years, and I think it was only the second Coyote with an automatic transmission in the 9s, said Windsor.

From there, he headed to the World Cup Finals Import vs. Domestic at Maryland International Raceway, where he fell off to 10s in early qualifying, and after identifying clogged fuel filters as the culprit, he changed them just before he was called to the lanes for the final round of qualifying and proceeded to put up a 9.95.

While Windsor exited eliminations early, he was pleased with how the car was running, and has turned his focus to the 25th Annual Nitto NMRA Spring Break Shootout, Feb. 28-March 3 at Bradenton Motorsports Park in Florida. He hasn't missed an NMRA season-opener since 2006.

I've already gone back to the smaller injectors and replaced the methanol with C10, and now all I have to do is replace the Boss 302 intake with the 2018 intake to get back to NMRA trim, said Windsor. Frank Lupo's Pro-Formance Transmissions is freshening my C4 and Dynamic Converters is loosening my converter, and I recently picked up some parts from (Michael) Washington, including a new 8.8 rear-end which had been in his car, Pure Evil, plus some new Aerospace brakes, axles and a lightweight driveshaft. I'm looking forward to the NMRA season. I finished ninth in Factory Stock points last year, and would love to finish in the top five this year. That's my goal.