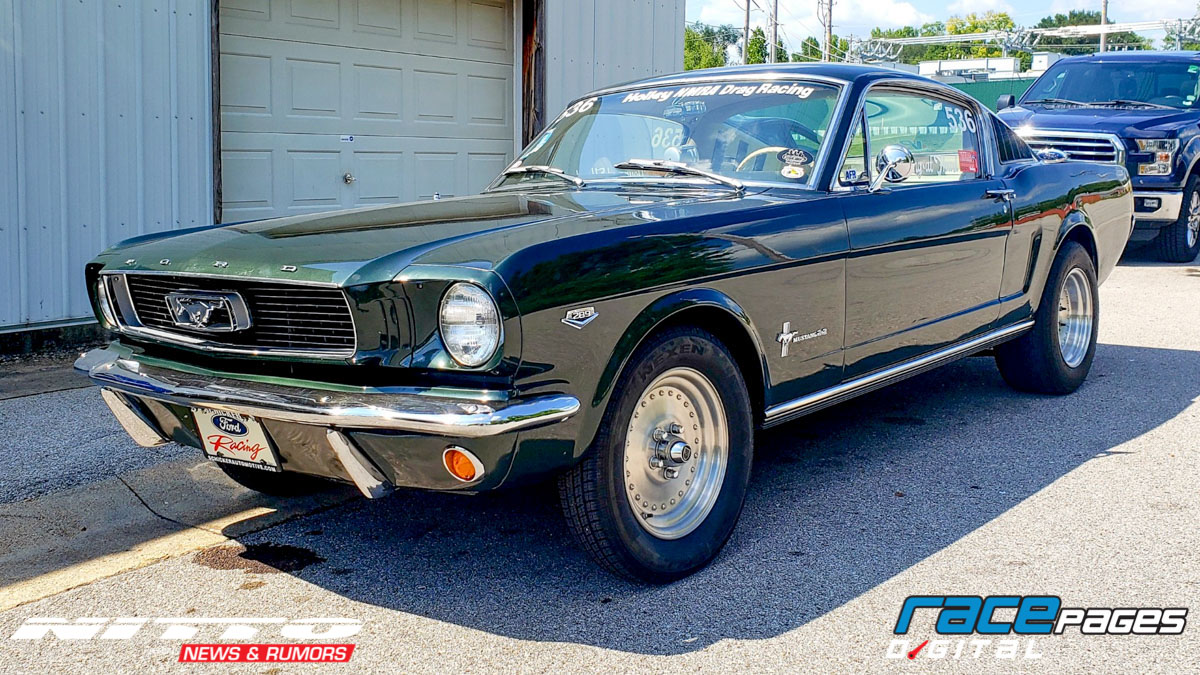 Written by Ainsley Jacobs After being away from drag racing for nearly half a century, Dan Helmsing recently returned to the sport and is having the time of his life. Now, he's making the move to NMRA Race Pages Digital Ford Muscle with a classic 1966 Ford Mustang. In his teens, the Missouri resident, now 75 years young, was heavily involved in racing. He was drafted to serve in the military and began a trade career as a sheet metal worker once he exited the armed forces. A few years in, I had an industrial accident which affected my manual dexterity and I also lost an eye, shared the man who seems no worse for the wear. Suddenly looking for a new vocation and with his life dramatically altered forever, he walked away from racing.

Ironically, Helmsing wound up working for his family's automotive group overseeing a portfolio of Ford and Lincoln dealerships in the St. Louis area. In 2013, in his late 60s, he shifted away from managerial responsibilities and back into pursuing his passion. Helmsing purchased a 12-second capable turn-key modern muscle 2014 Dodge Charger SRT8 and quickly began racing it with the NMCA in the Dodge//Mopar Hemi Shootout category as well as at select NHRA Hot Rod Reunion events. Lots of fantastic people decided to help this old guy out, laughed Helmsing, who got hooked up with Aaron Worstell and his father, Bill Worstell. Then I got bit by the nostalgia bug and started looking at our family's old cars that had been stuffed away. I found a 66 Mustang fastback K-code car that had come from the factory with an automatic transmission. A little detective work revealed the car clearly had a racing history. Knowing it needed work to get going again, the Worstells generously agreed to help Helmsing.

The factory 289 ci engine was replaced with a new 5.0-liter modular engine, which had been bored 0.030 over, instead. Next, a set of Air Flow Research (AFR) 185cc heads were added, along with a Trick Flow cam and Holley carburetor. Both the fuel system and ignition systems were upgraded to present-day technology, and the Mustang's heart was then mated to a rebuilt C4 transmission. To prepare the frame to handle the newfound power, sections were rewelded and strengthened. Calvert Racing's famous CalTrac traction bars were installed to work with the leaf spring suspension, and a Ford 9 rear end with 4.11 gears was bolted in. To finish up the simple yet stout set up, Helmsing and the Worstell men converted the old front drum brakes to disc brakes and replaced all four corners stoppers with components from Wilwood before wrapping the 15 wheels in premium Mickey Thompson drag radial rubber.

My approach to things in life is to follow the advice of that song, fairy tales can come true, it can happen to you, if you're young at heart, noted the driver who has the same sentiment scripted on his Mustang's side windows. I'm really excited to be doing this and to be with Aaron and Bill [Worstell] they've been so good to me and put me on a fast track back into racing. Currently, Helmsing plans on racing his beautiful 1966 Ford in NMRA Race Pages Digital Ford Muscle on a 12.50 index at the 23rd Annual Whipple Superchargers NMRA World Finals Presented by Competition Clutch Featuring the Holley Intergalactic Ford Festival in early October at Kentucky's Beech Bend Raceway Park. After that, he'll have to wait patiently through the off-season before coming back for the full 2022 Holley NMRA Drag Racing Series. Competitive by nature, Helmsing fully intends to chase the championship not just show up. His never give up and keep dreaming approaches to things have certainly served him well over his years, and everyone involved in his camp is excited to see where his latest adventure takes him.
Ford Muscle
,
Ford Mustang
,
Mustang fastback
,
nmra