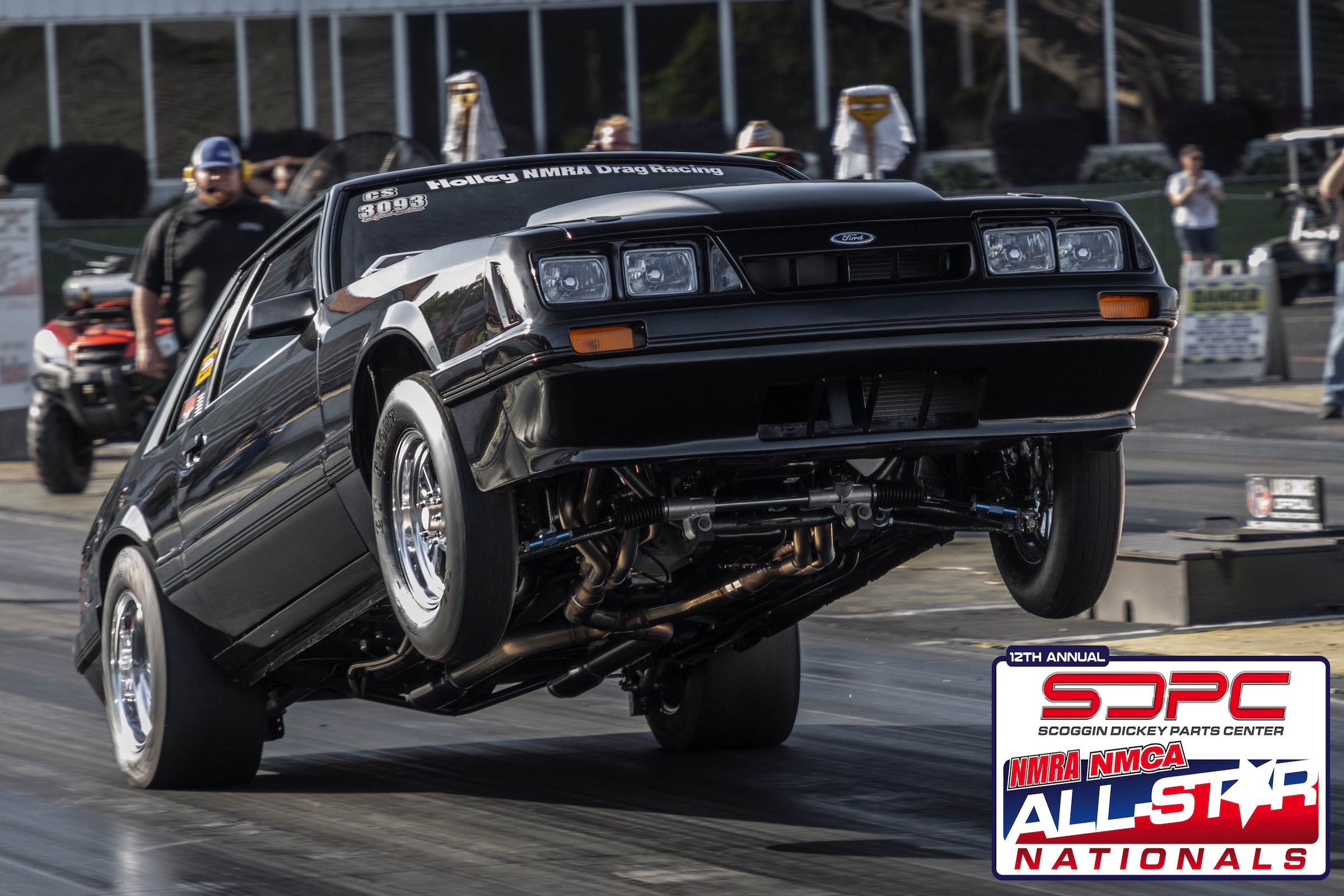 The 13th Annual Scoggin Dickey Parts Center NMRA/NMCA All-Star Nationals Presented by MAHLE Motorsport had a strong start yesterday as competitors got a feel for the track during time trials. However, things get real in a hurry today as racers head immediately into qualifying at Atlanta Dragway. Keep an eye on this page for updates to see how the action unfolds.

Here is the revised schedule for the second day of action at the 13th Annual Scoggin Dickey Parts Center NMRA/NMCA All-Star Nationals Presented by MAHLE Motorsport. In deference to the forecast, the usual morning Index time trial session was removed, and Friday action kicks off with qualifying for the Index categories at 8:30 a.m.

After winning the Edelbrock Renegade class at the NMRA season opener, Chuck Bartholme looks to build on his momentum in the class this weekend. After his crew chief Mike Dez and fill-in driver Brad Schehr diagnosed issues with the transmission at the NMCA season opener, which prevented them from gaining more setup data on the car for this weekend. With the trans repaired and the engine's health verified on the dyno, Dez is confident he can find a tune-up to go rounds at Atlanta Dragway with Bartholme back behind the wheel.

Kevin Sanders is running two cars in two classes this weekend. In addition to his familiar, green ARP Open Comp machine, he is piloting this 1985 Mustang GT in Fastest Street Car Ford Muscle. This classic T-top car features a unique powerplant under the hood. Sanders built the car up using leftover parts, so it is powered by a 289 out of a 1965 Mustang. It runs low 13s all-natural and 12.80s on the squeeze and plants the power with classic Lakewood traction bars.

Since Dwayne Hickman's car is wounded, he decided to have some fun this weekend with his grandson Gavin Black. The lucky young man gets to pilot a real 1993 SVT Mustang Cobra, powered by a 2007 Shelby GT500 5.4-liter engine, in QA1 True Street this weekend. The duo is gunning for the 10-second category with this classic Cobra.

Though he went sideways on his first test pass, Bob Dill doesn't have a #1 on his truck's window for no reason. He is working to dial in just the right level of boost and weight in his 8-second Ford SVT Lightning. The orange truck runs a stout Coyote constructed by JPC Racing that eats up boost from a single 88mm turbocharger. Once a car show buff, Dill has definitely become a true racer. Having clocked his first win just six years ago and a championship last season, he is loving the racing life. He also has an orange 2021 Shelby GT500 on order, so we'll see what he has in store for that impressive machine.

Just a year ago, John Gambill Jr. set out to go racing with his father, who has participated in the sport for decades. A CEO of an IT company, he earned his license at the Frank Hawley school and picked this 1993 Mustang GT as a roller. Gambill is only the second owner and it has always been a race car. In 55 days he turned it into a viable race car last year and appeared at the NMRA World Finals. Currently it features a 7.50-certified chassis and an 890-horsepower, 434ci small-block under the hood, which is fed by an Aeromotive fuel system. Behind the potent small-block is a Coan Engineering Turbo 400 transmission and a Strange Engineering rearend with Moser axles. From not racing to running eights in ARP Open Comp sounds like a great move to us.

Though he was happy running 9.70s in G-Force Racing Transmissions Coyote Stock at the season opener, Clair Stewart ran out of passes to see just how quick his car would run. After fighting issues with the clutch and two-step in Florida, he seems to have his Fox dialed in thus far at the 13th Annual Scoggin Dickey Parts Center NMRA/NMCA All-Star Nationals Presented by MAHLE Motorsport where it is looking sharp in a Stifflers wrap. 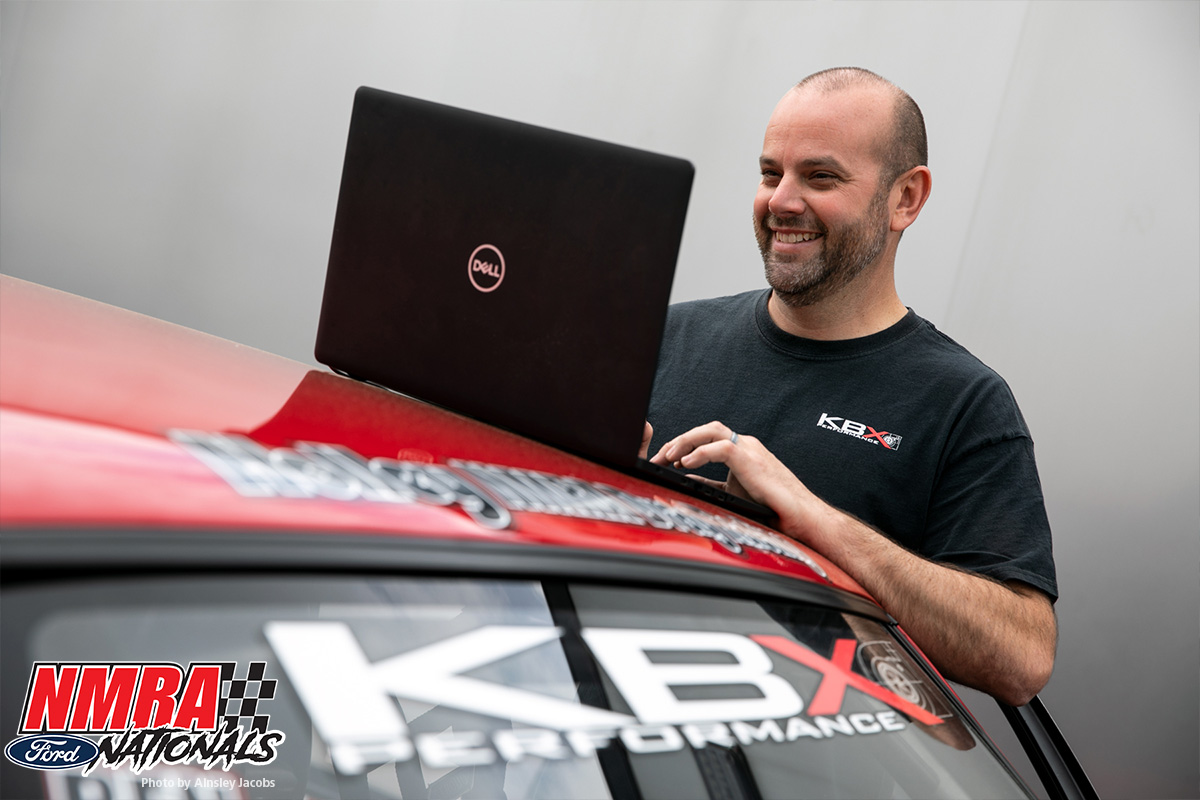 Coyote Stock racer Randy Soper tore up his G-Force G101a transmission during Thursday's test session and swapped in a loaner from Chad Stephens. Thankfully, G-Force's Paul Long is here this weekend and was able to open up the box, assess the damage, and install a few new spare parts that Soper had in his bag o transmission parts. 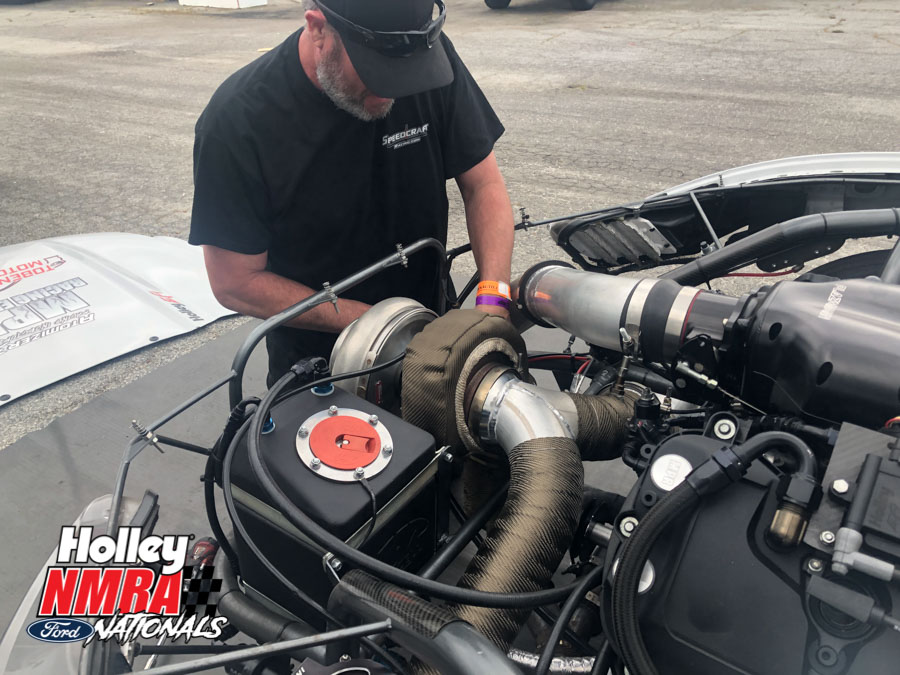 Georgia resident Bart Tobener has been tweaking on his Coyote-powered and turbocharged S550 Mustang recently. After feeling that the single downpipe may have been pushing the car to one side, he split the downpipe in half and diverted the exhaust flow equally to each side. The Tobener Motorsports machine is also sampling various torque converter stators to pick up some time and to improve consistency. 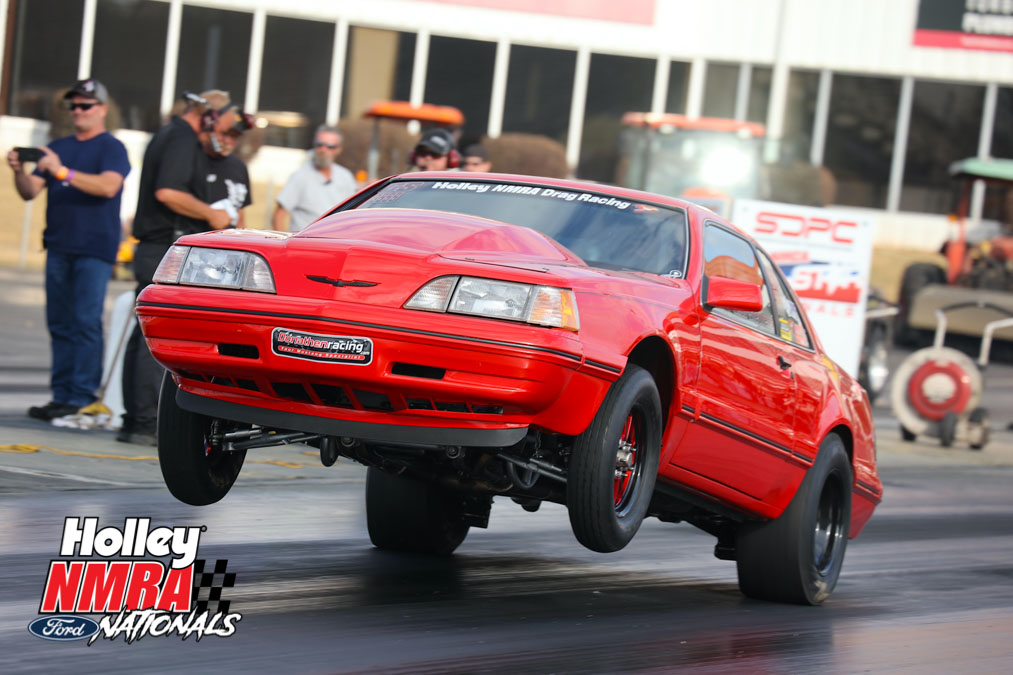 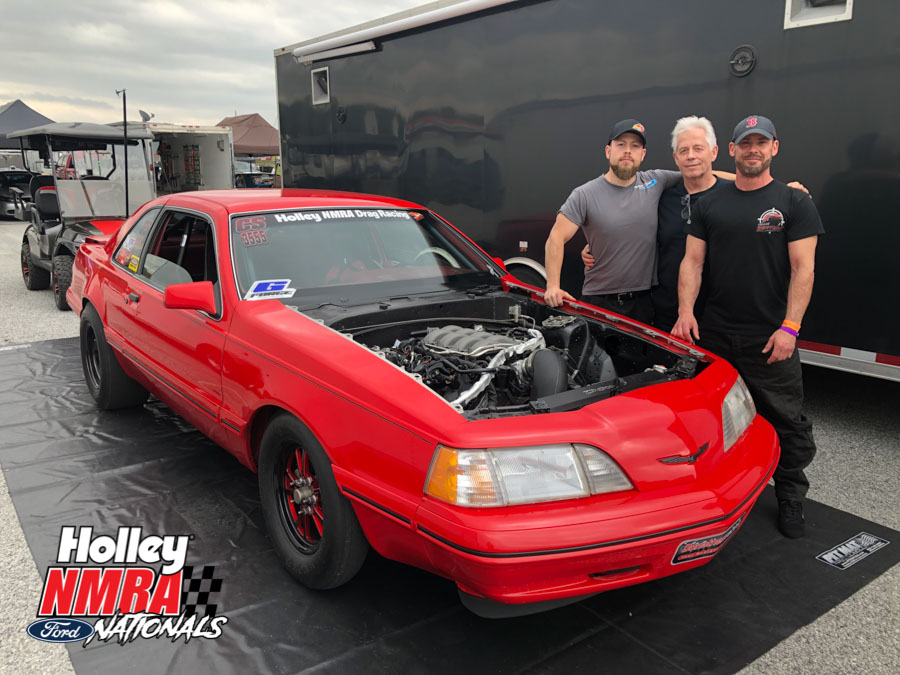 Canada's Chad Stephens was stuck in his home country for all of 2020 due to Covid restrictions, but he's possibly the happiest man on the property this weekend as he finally put all of the pieces together to get his G-Force Racing Transmissions Coyote Stock Thunderbird and his team to Atlanta Dragway to start the 2021 NMRA season. Though sidelined last year, Stephens followed the series closely and worked with fellow CS racer Torrey Brown on his program. For this year, Stephens has been digging deep into acquiring and learning from new data to improve his own program. 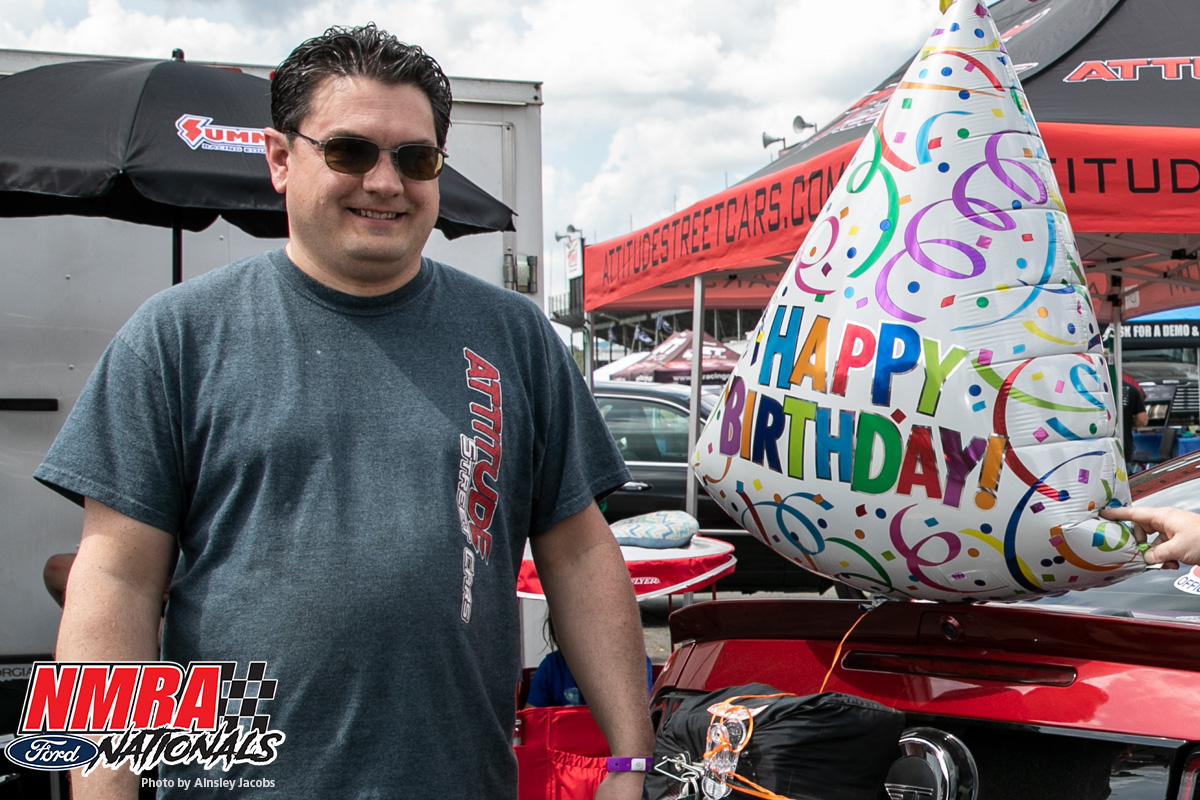 The NMRA and NMCA is wishing Brandon Conner, owner of Attitude Street Cars in Marietta, Georgia, a happy birthday today. ASC also has a great display on the vendor midway with a wicked Coyote-swapped Lincoln Town Car and other interesting items come take a look if you're on the property at Atlanta Dragway this weekend. 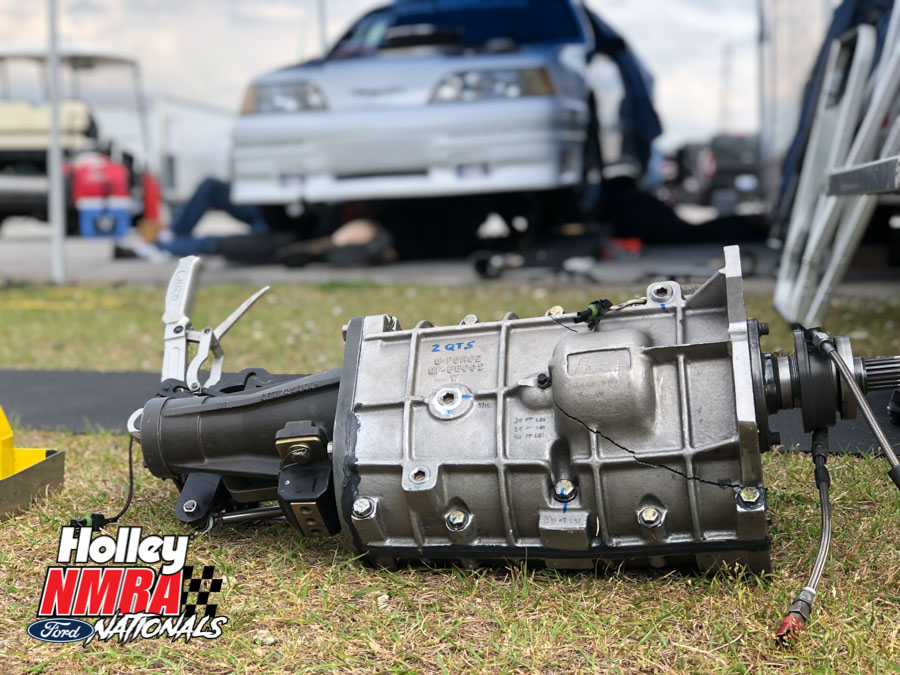 ARP Open Comp racer Dennis Corn likes a challenge, as he's one of just a handful of racers competing in an index style of class with a stick-shift transmission. While his combination is usually dead reliable, and his racing program run tightly, Corn's GF5R transmission uncharacteristically cracked under pressure. With G-Force Racing Transmissions own Leonard Long on the property, Corn plans to meet up for an autopsy on the gearbox to find the cause of the issue. Thankfully, it was also Long a longtime racer himself and multi-time champion who convinced Corn to carry spares of everything in his trailer, and he had a second transmission ready to go to keep him racing this weekend.
All-Star
,
Atlanta Dragway
,
Commerce
,
Coverage
,
Event
,
Georgia
,
MAHLE
,
Nationals
,
NMCA
,
nmra
,
Scoggin-Dickey