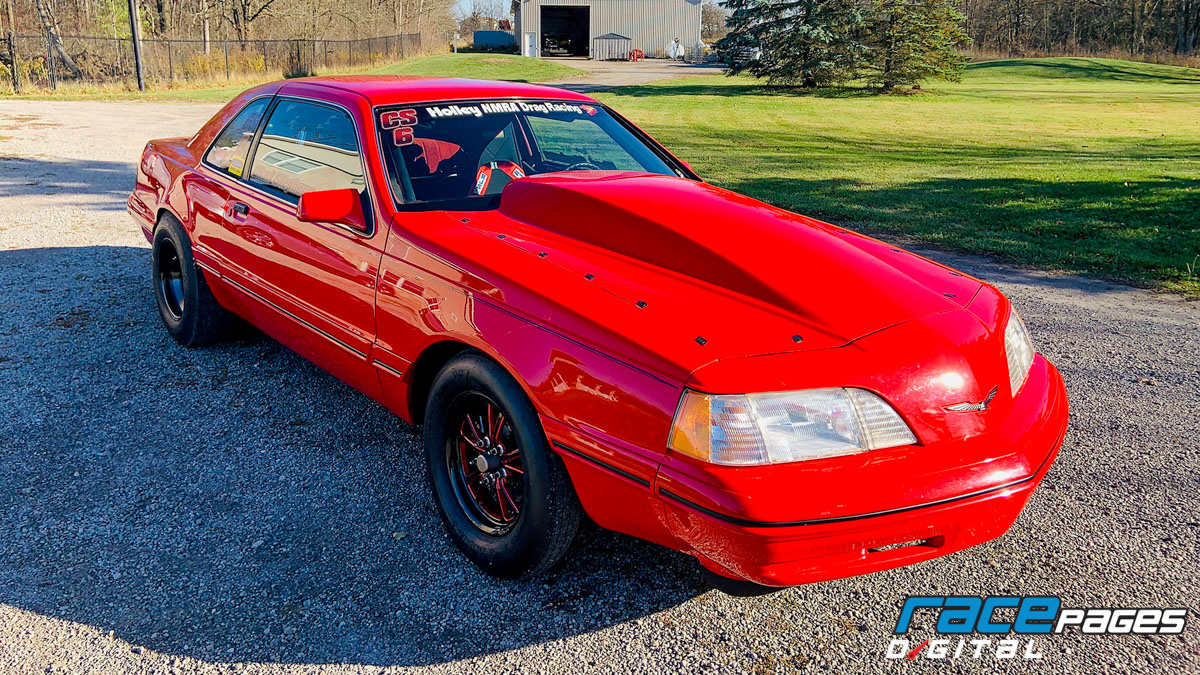 Canadian racer Chad Stephens is known for his 87 Ford Thunderbird's high-flyin wild wheelie action, but now the NMRA G-Force Racing Transmissions Coyote Stock standout can also be known for putting down the first 9-second quarter-mile pass with a Gen III Coyote engine. It's been a season of ups and downs for Stephens, after starting things out at Florida's Bradenton Motorsports Park in February. Shortly thereafter, though, the Covid-19 pandemic chaos caused the border between the United States and Canada to be shut down and Stephens was stuck. He didn't want to be completely excluded from his NMRA family and friends, though, and instead worked with fellow racer Torrey Brown to help progress his program instead. When they announced the closing, we decided to focus on testing for the time being since there was nothing else that we could do, explained Stephens, who was soon surprised by Ford Performance's announcement of the new Gen III being released. A week later, we ordered one.

Stephens wrapped up his testing with his Gen 2 5.0L Coyote engine in mid-June, with which he had run a personal best of 10.08 at 132 mph to date in Coyote Stock-legal trim. He also pulled 450-pounds of ballast out of the Bird, put it on pump gas with a stock tune, and got his licensing done with a 9.76 at 135mph hit. The runs were the culmination of a lot of hard work and data analysis on Stephens's end. I realized I had been short-changing myself, he laughed of how he had a good thing going and was hesitant to really push it forward. Struggling to improve his 60-foot times, Stephens reviewed the data and caught on to a trend. The Clutch Tamer does a good job but it's tough to take advantage of it consistently. I had the idea to soften the hit out of the hole so I didn't blow the tire off and had it to where the car could practically leave on wet grass.

When his new bullet arrived in late July, Stephens and Team Dirtybird got to work getting it set up while David Born, engineering manager for Ford Performance Parts, re-flashed the car's PCM to work with the Gen III. Because of work and life and other such things, though, it wasn't until October 10th that Stephens was able to make his first testing pass at Toronto Motorsports Park. We went 10.29 at almost 132 mph, recalled Stephens, who left the rearend ratio and transmission alone from his prior Gen II setup as a baseline to start. The new engine makes peak power 500 rpm higher and makes 40 horsepower more to the rear wheels. The clutch was too loose and there was too much gear in the car, but I was happy with it.

With a quick clutch change and still no adjustments to the gearing, Stephens later ran three 10.0-second passes, lifting, on a track surface that left much to be desired. I knew it could do a nine, he stated. With the weather up here, there's no guarantee the track will be open because of snow, so we went back to the shop and put a different rear in it. With the pressure of the ticking clock motivating him to get it done, Stephens headed back to Toronto to give it one last shot. His first pass was a nice and clean, no drama 9.94-second run. The air wasn't the best and the data showed the clutch slipped a little, explained Stephens, who made a few small changes and ended up putting down a 9.90, a 9.89, and a 9.87-second run before calling it quits. That was in class trim at full weight, and we don't chill our fuel. There's more left in it, and this engine is definitely angrier.

His continued work with the Clutch Tamer and data analysis are a big part of why the Gen III engine was able to produce such a large improvement in his efforts, too. We looked hard at the clutch program and gear ratios to run with the new engine, noted Stephens, who was happy to leave the line without it being Bumper Drag City for the Thunderbird. I wasn't giving the car enough clutch out of the hole. I should have caught it earlier. With the first Gen III 9-second run now in the books and with his name inked beside it, Stephens is in a great spot to start his 2021 NMRA G-Force Racing Transmissions Coyote Stock season and make it a seriously interesting year, as long as the border situation allows for it.
Chad Stephens
,
Ford Performance
,
G-Force Racing Transmissions Coyote Stock
,
GEN III Coyote
,
Toronto Motorsports Park