By Mary Lendzion Joel Greathouse is utterly unflinching when he is in the driver’s seat of his very dramatic Mustang. With equal parts of grace and grit, he handles everything from boisterous racing to bumps in the road, and fellow racers and race fans witnessed that when he earned the 2020 NMRA Edelbrock Renegade championship, and again when he gave it everything he had to back it up in 2021. With his talented team at his side, including crew chief and tuner, Justin McChesney of KBX Performance, car chief, Ben Thomas and car owner, Jeremy Wolf, Greathouse got going by qualifying in the seventh spot with a 4.65, but exited eliminations in the second round when he was forced to lift at the BMR Suspension NMRA Spring Break Shootout in March at Bradenton Motorsports Park in Florida. “We started the season out in Bradenton on a sour note,” said Greathouse. “We had a fuel injector and fuel pressure issue, and we had to swap a piston twice at the race. It was a lot of hard work that weekend, but we found the problem.” Greathouse, who has a bountiful Bennett Racing Engines-built small-block Ford based on an 8.2 deck Dart Iron Eagle block topped with Trick Flow High Port heads and fronted alternately by a Harts turbo or Forced Inductions turbo, then qualified in the eighth spot with a 4.66 and finished as the runner-up with a 4.57 at the Scoggin Dickey Parts Center NMRA/NMCA All-Star Nationals presented by MAHLE Motorsport in April at Atlanta Dragway. 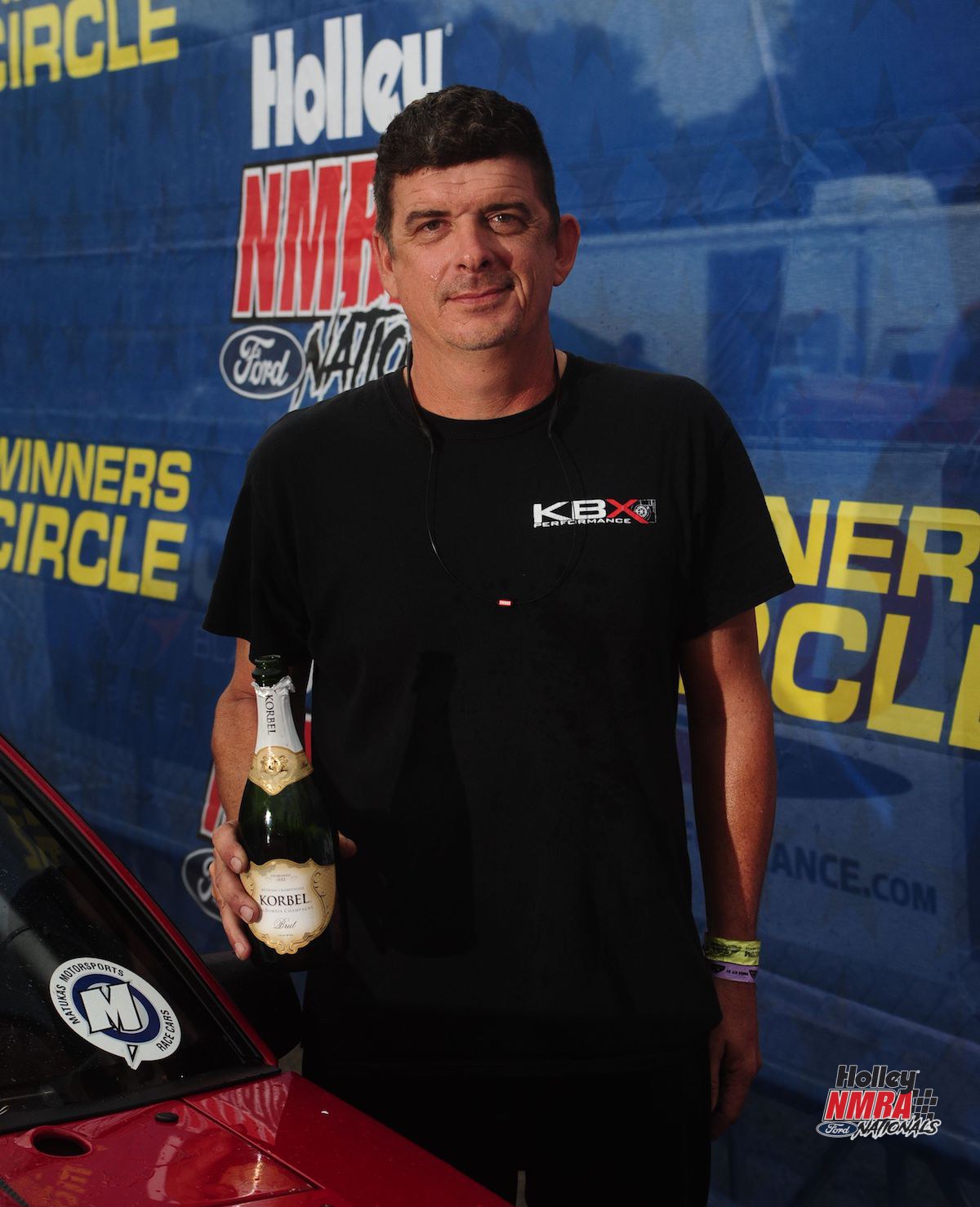 From there, he set the pace in qualifying with a 4.522 at the NMRA/NMCA Super Bowl of Street Legal Drag Racing presented by HPJ Performance in May at World Wide Technology Raceway in Illinois. He claimed the 4.522 as an elapsed time record in the category, and it still stands. He also won the rain-delayed final round of eliminations. Greathouse set the pace in qualifying again, this time with a 4.61, and went to the NMRA Winner’s Circle with a 4.63 at the NMRA Ford Performance Nationals in June at Summit Motorsports Park in Ohio. As the points chase heated up, he hauled to a 4.64 to qualify in the eighth spot and finished as the runner-up after going -.003 red on the tree at the Inaugural Arrington Performance NMRA/NMCA Power Festival presented by Force Engineering in July at U.S. 131 Motorsports Park in Michigan. Greathouse soared to a 4.56 to qualify in the second spot and exited eliminations in the semifinal round with a 4.67 at the final event of the season, the Whipple Superchargers NMRA All-Ford World Finals presented by Competition Clutch and Holley Intergalactic Ford Festival in September at Beech Bend Raceway Park in Kentucky. With that, he became a back-to-back Edelbrock Renegade champion. “We were able to make it to the final in four of six races this year, and with this level of competition, we are extremely proud of that,” said Greathouse. “Races were won on the tightest of margins, and many rounds were won on holeshots. It proves that there must be a well rounded team to be successful. Not just a driver, car chief or tuner by themselves, but a combination of all of them working together to be successful. We have been fortunate enough to have that with myself, Jeremy, Justin and Ben and our families. Missy, Michelle, Buffy and Tiffany have supported us along the way, and our kids have enjoyed tagging along as well.” Greathouse will be commended at the NMRA Ford Nationals Champions Ceremony, held during the PRI Show on Dec. 10 at the Indiana Convention Center, and in the upcoming Champions Issue of Fastest Street Car Magazine. “We also get amazing support from our KBX Team, John Kolivas, Jon Bennett and others, and our sponsors are second to none, including KBX Performance, Bennett Racing, Young's Performance, ProTorque Converters, RPM Transmissions, Forced Inductions, Harts Turbo, Menscer Motorsports, VP Racing Fuels, RC Components, Matukas Motorsports, FuelTech, TBM Brakes and Weldon Pumps. Thank you also to Broc Porter and the Jones family at Beech Bend Raceway, Jeremy Wolf and Larry Harper.” 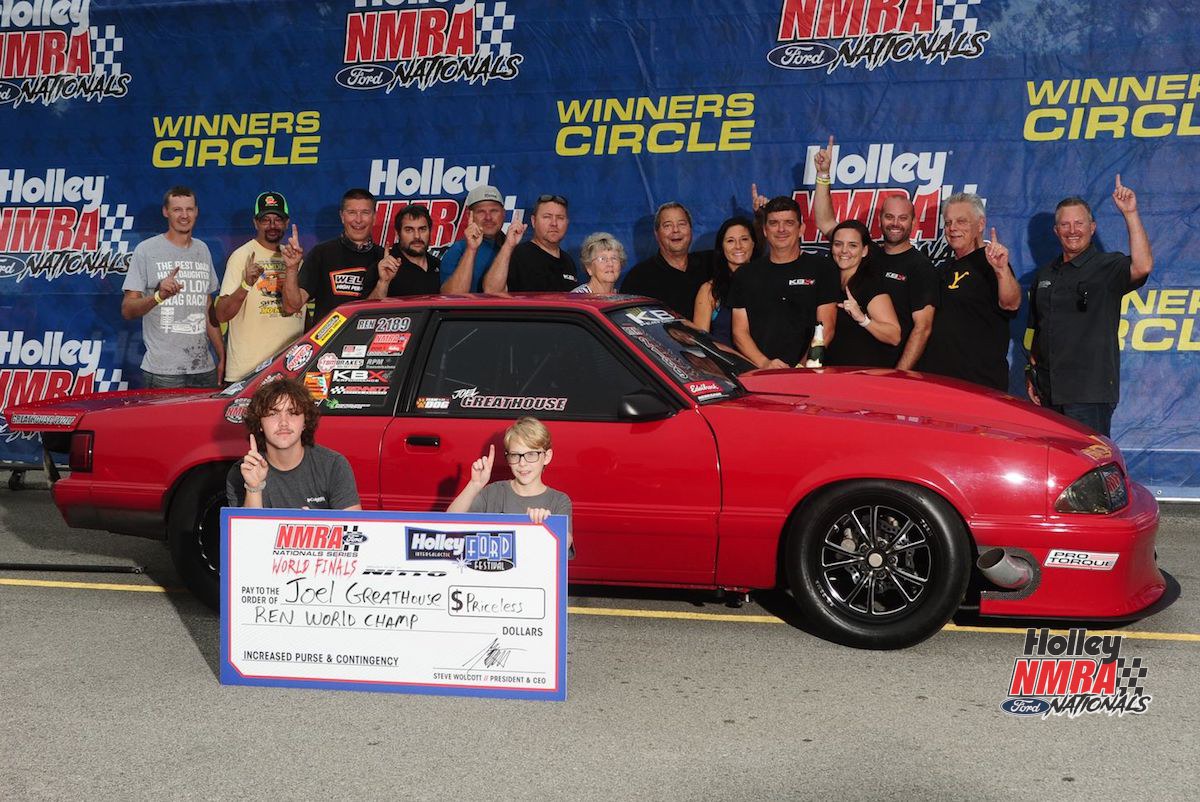