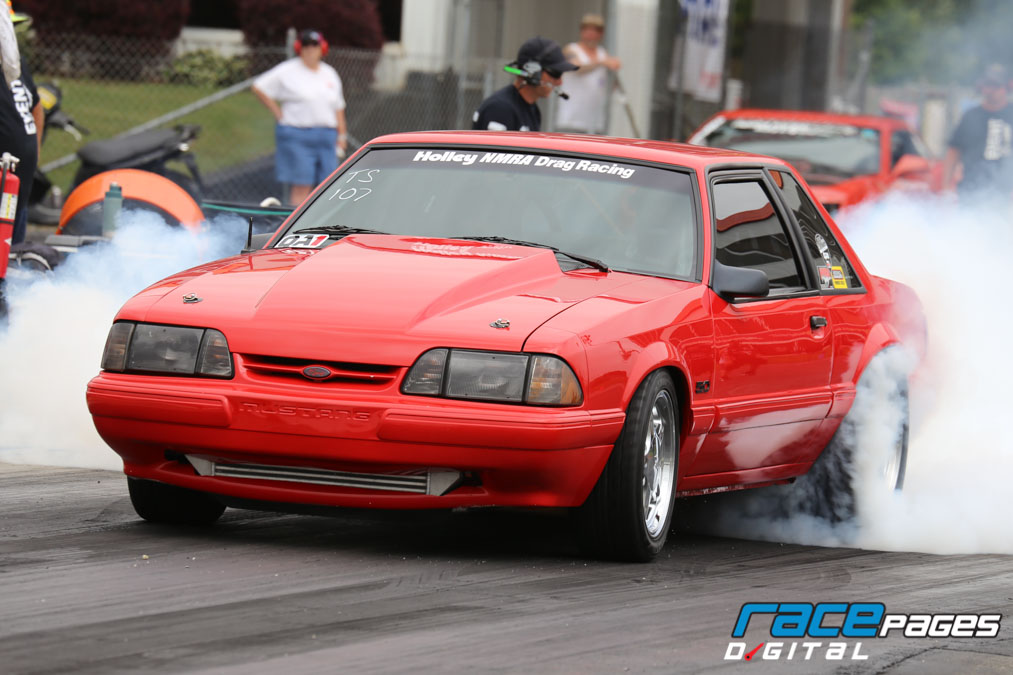 In 2019, it was Jeff Bloem who traveled down from his home in Canada and dominated the Spring Break Shootout by winning that heads-up class, as well as the overall win in QA1 True Street. He added another win at the season finals at Beech Bend Raceway during the NMRA World Finals and Holley Intergalactic Ford Festival by taking the King of the Street crown. Donato Sierchio was the first competitor to get on the 2020 KOTS ladder after he took home the JLT Performance Spring Break Shootout win at the 2020 NMRA season opener in Bradenton, Florida. The GForce Performance Engineering King Of The Street (KOTS) class is a heads-up eliminator that consists of the overall True Street winners from each NMRA event, as well as the Spring Break Shootout winner. In 2019, New Jersey's Mike Jovanis was runner up to Bloem in Florida and in the King of the Street final round against Bloem, and he secured his 2020 spot on the KOTS ladder with a win in True Street at this season's kickoff race in Florida after going head to head with Sierchio all weekend. The COVID-19 scare put racing on hold for several months after the first race, and it would be June before competition resumed. At the 2020 Scoggin-Dickey Parts Center NMRA/NMCA ALL-Star Nationals in Commerce, Georgia, Sierchio was on the property looking to push his turbocharged, small-block Ford-powered Mustang even deeper into the 7s, but suffered issues and wasn't able to complete the True Street trial. With Sierchio and his 7-second-capable Mustang out of the running in Commerce, it left the door open for QA1 True Street regular and frequent Drag Week racer Alex Corella to grab the next available spot on the ladder. Corella's Mustang, sporting a new-for-2020 Pony wheel and tire package, put up an 8.81 on its first run, but an off-pace 12.14 on his second run would have likely thrown his average off. As it turned out, his third run was a 9.18, and the average of the three gave him a 10.048-second number, and the 10-second win. It also put him atop of the Ford-powered and bodies cars of the mixed NMRA/NMCA True Street contingent at the Atlanta event and thus a spot on the KOTS ladder at the NMRA World Finals in Bowling Green, Kentucky later this year. Race by race, the ladder for the GForce Performance Engineering King of the Street will be filled, with the dramatic showdown happening on Saturday of the NMRA World Finals, which is the biggest Mustang motorsports event of the year. The King of the Street winner will walk away with $2,500, other special prizes, a prestigious Victor award, and a celebration in the Aerospace Components Winner's Circle. So far, it's all Fox-Body Mustangs. Will we see something newer jump into the fray Come back to RacePagesDigital.com to find out.