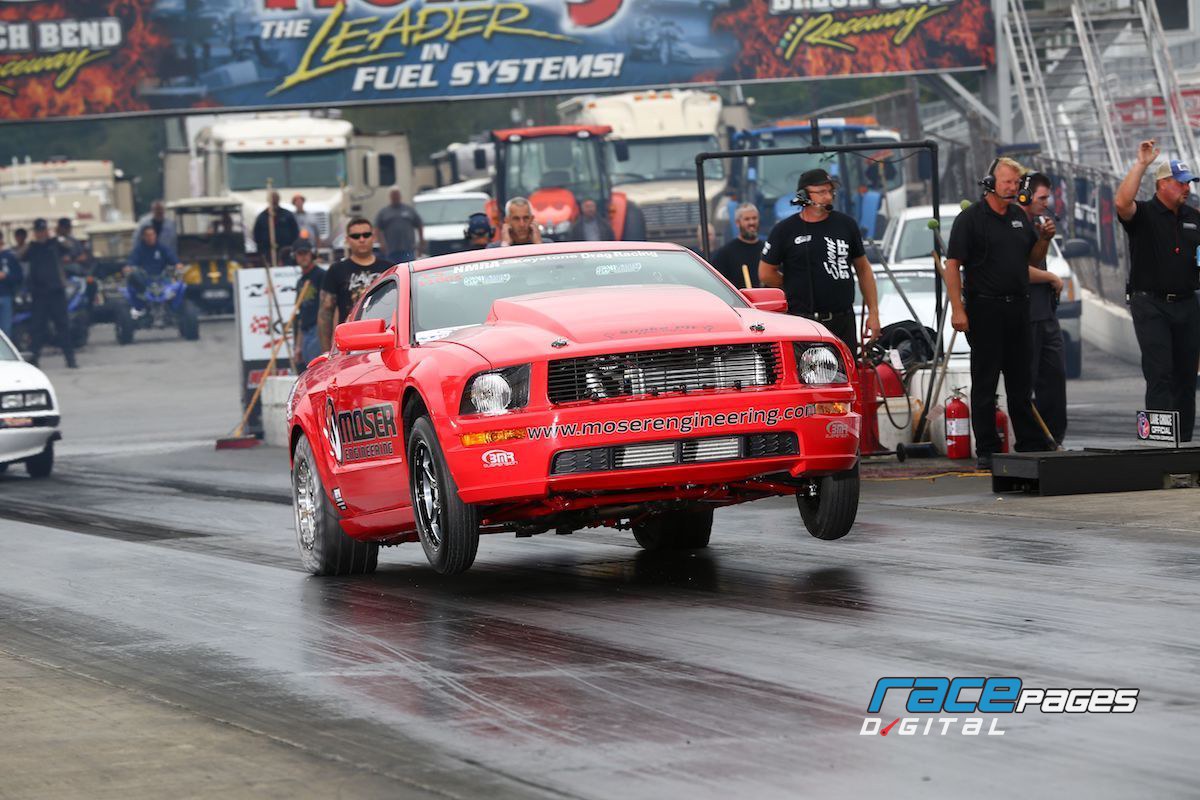 Photos by NMRA and courtesy of Chad Wendel

After crushing it in NMRA ROUSH Performance Super Stang for several years, Chad Wendel decided that he wanted to make the move to NMRA Steeda Limited Street in 2018.

To prepare his Mustang for the series hot new heads-up category, he replaced his 4.6 3-Valve engine with a Coyote engine topped with a Boss 302 intake, and he fronted it with the same Paxton 2200 supercharger he had been using.

He swapped his five-speed transmission with a Turbo 400 by RPM Transmissions, and he chose a Holley Dominator EFI system for engine management.

While he was at it, he upgraded the cage in his car and added 165 pounds to his car to get it to the base weight required for the category. With BMR suspension components in place under the car, he gave it a fresh set of Mickey Thompson ET Street S/S radials and loaded the car for the trip from his home in Indiana to the NMRA season-opener in March at Bradenton Motorsports Park in Florida.

We knew we had the wrong converter going into the race, but we wanted to test it to see where we were before we changed anything, said Wendel. We got a new PTC converter built, and after that, it went pretty well in the new category.

We could have won, but the car stood on the bumper and all four wheels were off the ground, said Wendel. I shifted in the air, it buried the rev limiter in second gear and it was between the 330 and eighth-mile when the car came down. It ripped the back of the trunk open and turned the bumper solid black.

By the time the final NMRA event of the year wrapped, Wendel, who had been running 11s with his previous combination, had wheeled to a best of 8.84 at 149 mph and earned an impressive third place finish in NMRA Steeda Limited Street points.

Not ready to park the car for winter, he headed to the Mod Nationals in November, where he ran into some trouble.

I broke the cylinder wall on the number six cylinder, and my engine-builder, Nyes Automotive, sleeved the block with Darton sleeves, said Wendel. I also got a new rotating assembly.

Rather than pair his rebuilt engine with his previous power-adder, Wendel went with a new ProCharger D-1SC, and looked to Jay Nelson to handle all of the new piping for it.

The car is ready to fire now, said Wendel, who relies on Tony McKinney and Todd Dennis of Complete Auto in Ohio to tune his combination. It will go on the dyno at Complete Auto in a few days and then we'll give it a bath.

Then, Wendel, whose Mustang features a Moser M9 rear-end and stops with Moser brakes, will be ready for the 25th Annual Nitto NMRA Spring Break Shootout, Feb. 28-March 3 at Bradenton Motorsports Park in Florida.

I really like Limited Street, said Wendel, whose son, Shelby Wendel, nephew, Levi Wendel and niece, Molly Wendel, race in NMRA ROUSH Performance Super Stang. It's a pretty affordable and fun heads-up class. My goals for this year are to do well on the tree, stay consistent and run in the 8.80 range. If I can do that, I'll be fine.