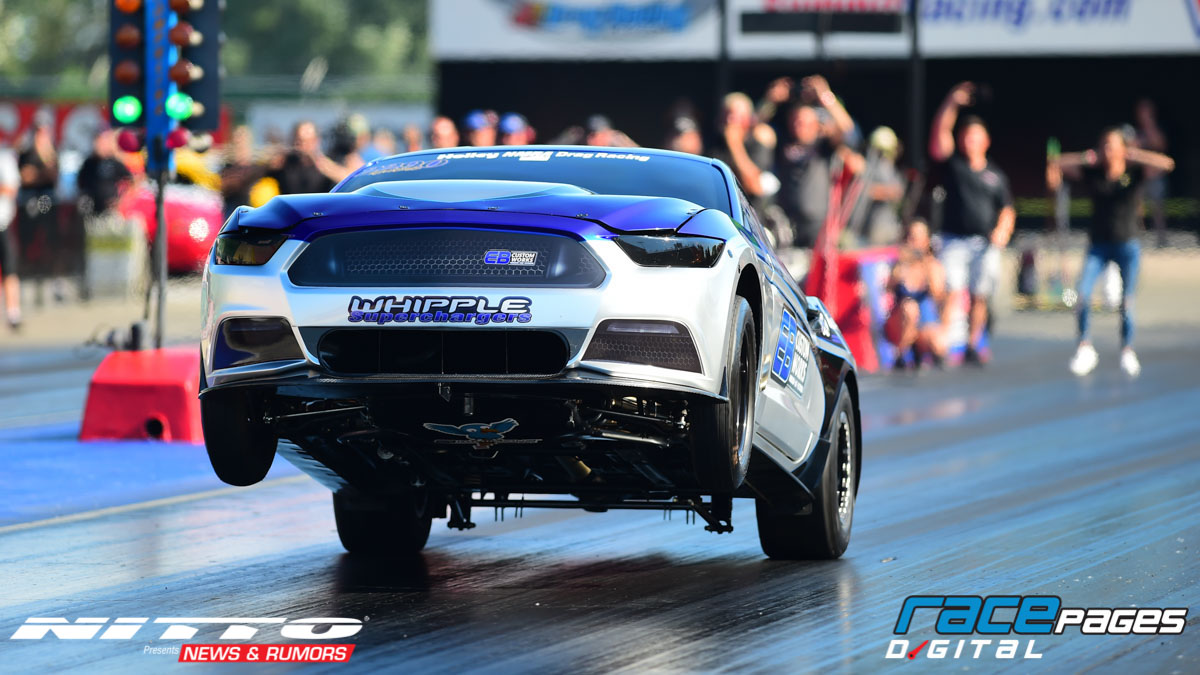 When Eric Bardekoff started his 2021 racing season, he was expecting to work hard and had hopes for some moderate success. He wasn't expecting to go into the finals for both NMRA and NMCA as the points leader in two championship chases. After finishing fourth in NMRA Edelbrock Renegade in 2020, Bardekoff wrapped up the year with a final-round appearance at the last event in Kentucky. That left us with a good mindset going into the new season, recalled the driver from Commack, New York. He knew that his S550 Mustang's Coyote engine had reached the limit of its 3.0L Whipple supercharger and had plans to step up to a larger one after the start of 2021's racing, however, that plan didn't go as expected and he wound up making the switch a bit early. In Florida in March for the 27th Annual BMR Suspension NMRA Spring Break Shootout season opener, Bardekoff ultimately bolted on a new, larger 3.8 L Whipple blower and ran as best he could with an admittedly lacking fuel system. We didn't know what pulley to put on or how hard to push it, Bardekoff recounted of the stressful weekend in which he qualified sixth with a 4.623 at 150.56mph hit and made it to the semi-finals. He was only intending to run the NMRA series, so Bardekoff sat out the NMCA Florida race in favor of staying home to work at his shop, EB Custom Works. By the following race, he had added a larger Weldon fuel pump and 1700cc fuel injectors from Lethal Performance so it could be full speed ahead literally. The addition of a new ProTorque torque converter also proved to be a game-changer, and the 13th Annual NMRA/NMCA All-Star Nationals event in Georgia saw Bardekoff post a 4.576 at 154.44mph blast in qualifying which placed him second. He later cruised to his first victory in the large combined NMRA Edelbrock Renegade/NMCA Xtreme Street category; although he wasn't originally looking to chase the NMCA championship as well, the win prompted Bardekoff to change his trajectory and include the series as well.

Amped up by his 2016 Mustang Cobra Jet clone's performance, Bardekoff blasted into St. Louis, Missouri, for the 16th Annual NMRA/NMCA Super Bowl of Street-Legal Drag Racing Presented by HPJ Performance. Qualified second once again to last season's champion, Joel Greathouse, Bardekoff stayed in the game through to the semi-finals. The next three races on his schedule, the Inaugural NMRA Ford Performance Nationals in Ohio, the Inaugural Arrington Performance NMRA/NMCA Power Festival Presented by Force Engineering in Michigan, and the 20th Annual NMCA All-American Nationals in Ohio saw Bardekoff add a runner up finish along with two more wins, respectively, to his collection. Now, with both season-finale events for the NMRA and NMCA looming, Bardekoff has all but wrapped up his first-ever championship title with a second potentially waiting in the wings as he is leading the points for both series. It really isn't that stressful, laughed Bardekoff, who did expect the pressure to be worse, but is instead focused on just going and having fun and letting the cards fall where they may while making the best of whatever hand he's dealt. It's been a really great season overall and I've got a great team. That team is the key to Bardekoff's success, and it includes his parents, his beloved wife Steph Bardekoff, his right-hand-man and tuner, Nicky Notch Mancuso, as well as all of his parts partners; they all work well together to put together performance packages that are not only powerful, they're reliable as well. A strong and meticulous maintenance program has been an integral part of Bardekoff's operation; he and Mancuso have painstakingly serviced the Coyote engine, which Bardekoff himself built using Rich Groh Racing valvetrain parts, more times than they can count. Other than a broken cam cap in Michigan, we haven't torn anything up all season and it's staying together really well, Bardekoff stated proudly in regards to his Coyote's cooperation. We track everything to see the lifespan of each part to see how far we can push them and how much power we can throw at them. Nicky is really good at keeping the tune up moderate and not beating the bearings out of it. Similarly, working with Ron Galbreath and Yancy Rodriguez at Afterworks on their shock and suspension settings has produced big advantages for Bardekoff. "Ididit Performance has been with me since last season. They are an unbelievable company to work with, and I'm constantly thankful that they trust me to represent their company and products at all the NMRA/NMCA events," he added. The Whipple supercharger, too, has received a ton of attention as Bardekoff's success has soared throughout the season. Whipple supplied us with a pre-production 3.8-liter supercharger. This unit is identical to the current cast production version available today, affirmed Bardekoff of the blower. "Whipple has helped me tremendously this season, constantly preparing me with the necessary parts, components, and feedback needed to get me through each race. Whipple Superchargers has been a huge part of my success. After having put in so much time, effort, and money, Bardekoff is thrilled to see his efforts are paying off. To prepare for his grand finale, he raced at the YellowBullet Nationals where he set a new personal best of 4.496 at 157 mph. And, although a backup engine is in the works for next season, he's currently running with only one bullet in the chamber'so he being is strategic about his next moves. We'll show up to the NMCA finals in Indy, tech in, and make a qualifying hit or two to get enough points to lock in the title, shared the man of his goal to keep as many runs off the car as possible in order to save it for NMRA final event where there's a bit more leeway as to which way the championship could go. It's on rails, though, and people are scared of it now. We really put in a lot of our time and effort and money this season, and it's showed. Where there's a will, there's a way.
EB Custom Works
,
Edelbrock Renegade
,
Eric Bardekoff
,
Whipple Superchargers