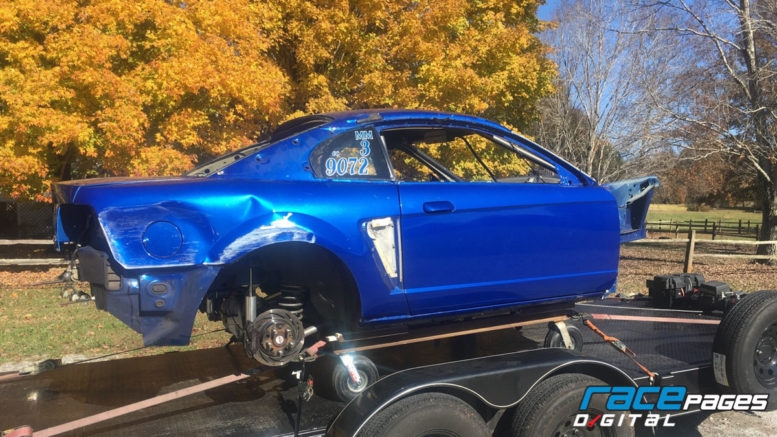 After a particularly scary wreck while racing at the 13th Annual Scoggin Dickey Parts Center NMRA/NMCA All-Star Nationals event at Atlanta Dragway in April of 2021, NMRA Exedy Racing Clutch Modular Muscle contender Gary Parker was thankfully spared from major injury, but his 2002 Ford Mustang was not as lucky. Parker’s Mustang made contact with the wall at the top end of the race track at a high rate of speed and sacrificed itself to save its driver. At the time, it was uncertain if Parker would return to racing, but the resilient racer has decided to strap back into the driver’s seat for 2022.

Handling the bulk of the initial disassembly work himself, Parker has had more obstacles to overcome than just the emotional and financial stress of the incident. He’s had to deal with Covid-19 supply chain issues as well as recovery from an unrelated back surgery. Despite the setbacks, he’s made a ton of forward progress. “My car is currently in the body shop with the talented Clint Poling handling everything,” shared Parker, who purchased a front clip so that he could completely replace the front end of his Mustang from the firewall-forward. “Then it will go to my badass painter, Jonathan Embry at Embry’s Auto Body and Restorations.”

Parker pulled his Coyote engine and sent it back to builder Rich Groh at Rich Groh Racing for a complete refresh. “I wanted to make sure that the block wasn’t damaged or had any hairline cracks, since there was so much stress on the K-member,” he clarified of the impact that did not compromise the integrity of either the block or crank. Groh will re-hone the block, add new rings and bearings, and finish up assembly before shipping it back to Parker at his home in Georgia. Similarly, Parker sent his Powerglide transmission off to Keith Neal at Neal Racing Converters for a refresh. Neal will also be doing some upgrades including adding stronger gearsets, better servo, and several other minor things to help strengthen the gearbox overall. Team Z came through with a completely new front end suspension package for Parker, and RC Components replaced the front wheels as the rears were deemed straight and true and certainly still serviceable; the rollers will be wrapped in rubber acquired thanks to Jason Moulton at Mickey Thompson.

Parker runs a full FuelLab fuel system including fuel pump, before filter, after filter, regulator, and pressure gauge, and that has all been maintenanced during the off-season as well. One of his primary sponsors, Attitude Street Cars, has also been instrumental in getting Parker up and running again. The shop’s owner, Brandon Conner, has loaned Parker his open car tilt-bed trailer to make transporting everything around significantly easier and offered up a ton of other necessary parts and pieces to get him rolling again. Lithia Springs Ford has also been a supporter of Parkers for several years and came through to help this time around, too. “I’ve got all the new fenders, the hood, and all sorts of things to get the car put back together and my goal is to make it to Bradenton,” affirmed Parker of his plans to kick off his 2022 season in Florida at the NMRA season opener back in Mod Muscle trim. He knows it’s a longshot, though, as there’s still a mountain of work remaining to be done, but is eternally grateful for the tremendous outpouring of support he has received from friends, family, and his sponsors-it takes a village, and Parker has an entire community standing behind him. “Thanks especially to my wonderful wife, Carole, for putting up with my constant telephone calls trying to get all of this ironed out!”
Drag Racing