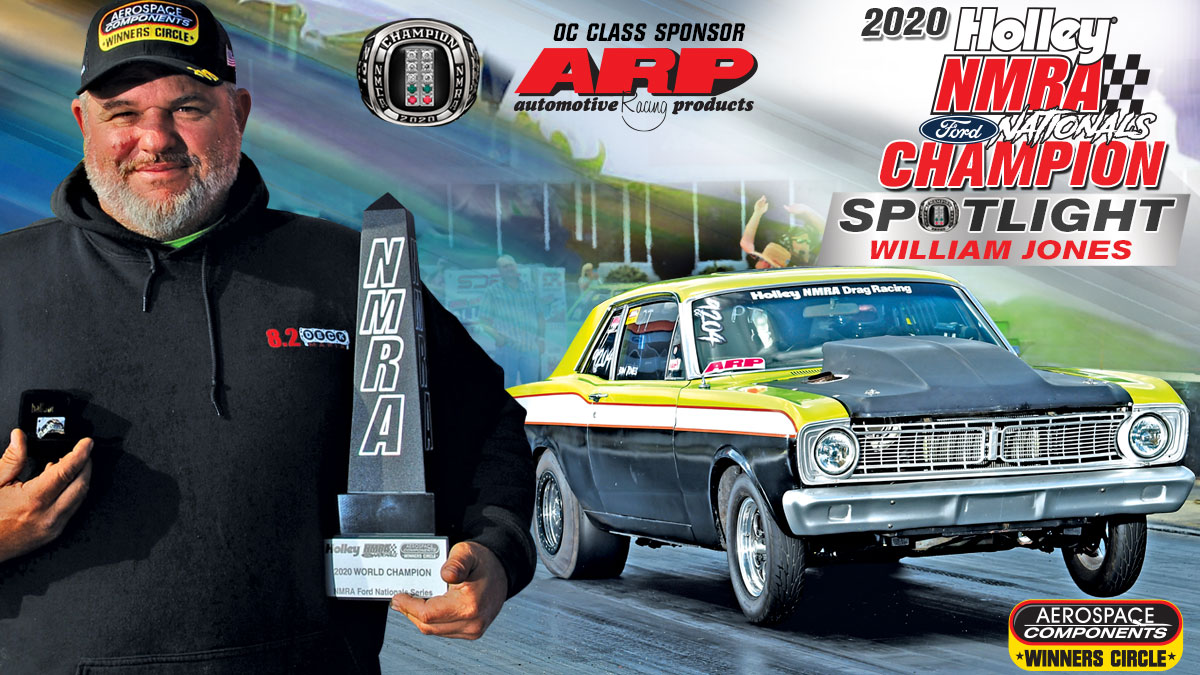 By Mary Lendzion William Jones is well-aware that NMRA ARP Open Comp is one of the most competitive categories in the series. He also acknowledges that he has to be an aggressive driver with an aggressive car to have a shot at spending some time in the Aerospace Components Winner's Circle. And, that has helped him see some serious success through the years, including in 2014, when he earned his first championship in the category. While he has held his own since then, he wanted, more than anything, to earn another championship in 2020. He got started by qualifying in the twenty-first spot with an .029 reaction time and winning with a 9.16 on a 9.12 dial at the first event of the season, the 26th Annual Nitto NMRA Spring Break Shootout, which was held Feb. 27-March 1 at Bradenton Motorsports Park in Florida. When we started the season, we had no idea what was about to happen in our country, said Jones, whose 1968 Falcon works quite well with a 351 cubic-inch engine paired with a Forced Inductions 80mm billet-wheel turbo. After winning Bradenton, we were in it for the long haul, and despite all the craziness, we kept our eyes on the prize.

All of that added up to a second NMRA ARP Open Comp championship for the hard-working Jones. While the Coronavirus pandemic prevented NMRA from having its annual ceremony to celebrate champions, each was invited to share the words they would have shared on stage in front of their fellow racers, family and friends. HOW DOES IT FEEL TO HAVE EARNED A CHAMPIONSHIP DURING SUCH AN UNUSUAL SEASON 2020 was definitely a crazy deal. After the points were decided at Bowling Green, I was talking with Gordon Harlow and Dennis Corn, the number 2 and number 3 in points. We reflected on how crazy 2020 was and how crazy the points outcome was when all three of us red-lighted back-to-back in the same lane and in round two. WHAT WAS THE BIGGEST CHALLENGE YOU OVERCAME ON YOUR WAY TO EARNING THE CHAMPIONSHIP We changed our car to turbocharged, which is very uncommon in an index class or in bracket racing. So we were still learning, and got lucky quite a few times with adjusting our tune to be able to run the index we had set. WHICH FAMILY MEMBERS AND FRIENDS WOULD YOU LIKE TO THANK FOR SUPPORTING YOU ALONG THE WAY I would like to thank my wife, Linda, who is a big supporter of mine, as well as my father, who is always behind me, my son, Cain, who helps me make all tuning decisions and maintain the Dirty Bird (the Falcon), my daughter Selycia, for holding down the fort at home and taking care of things, and my Pony Express Racing team. We travel together, work on the cars and help each other whenever we can. WHAT SPONSORS WOULD YOU LIKE TO ACKNOWLEDGE We didn't have any sponsors, but a bunch of people helped with advice and getting me the parts I need to have a great combination that worked really well, and I would like to acknowledge Vincent Performance Parts, John Bewley for the cam, Tony Whetstone for the loan of the Forced Inductions turbo, Robert Godfrey for the transmission, PTC for the converter, C&S for the blow-through carb, Wildcat Engines for the machine work, Dan Neumann for the roll cage, Strange for the brakes and rearend components, PST for the driveshaft, Menscer Motorsports for the shocks, MSD for the Grid, Weldon for the fuel pump and Leash Electronics for the boost controller. WHAT DO YOU ENJOY ABOUT RACING IN NMRA ARP OPEN COMP I really enjoy racing NMRA Open Comp because all the racers are there to help. You get a sense of family when you race with these guys and gals that I have never experienced with any other racing. Despite being fierce competitors, they are always willing to lend a hand, and that kind of camaraderie is infectious.
ARP Open Comp
,
Bill Jones
,
Ford Falcon
,
Turbocharged