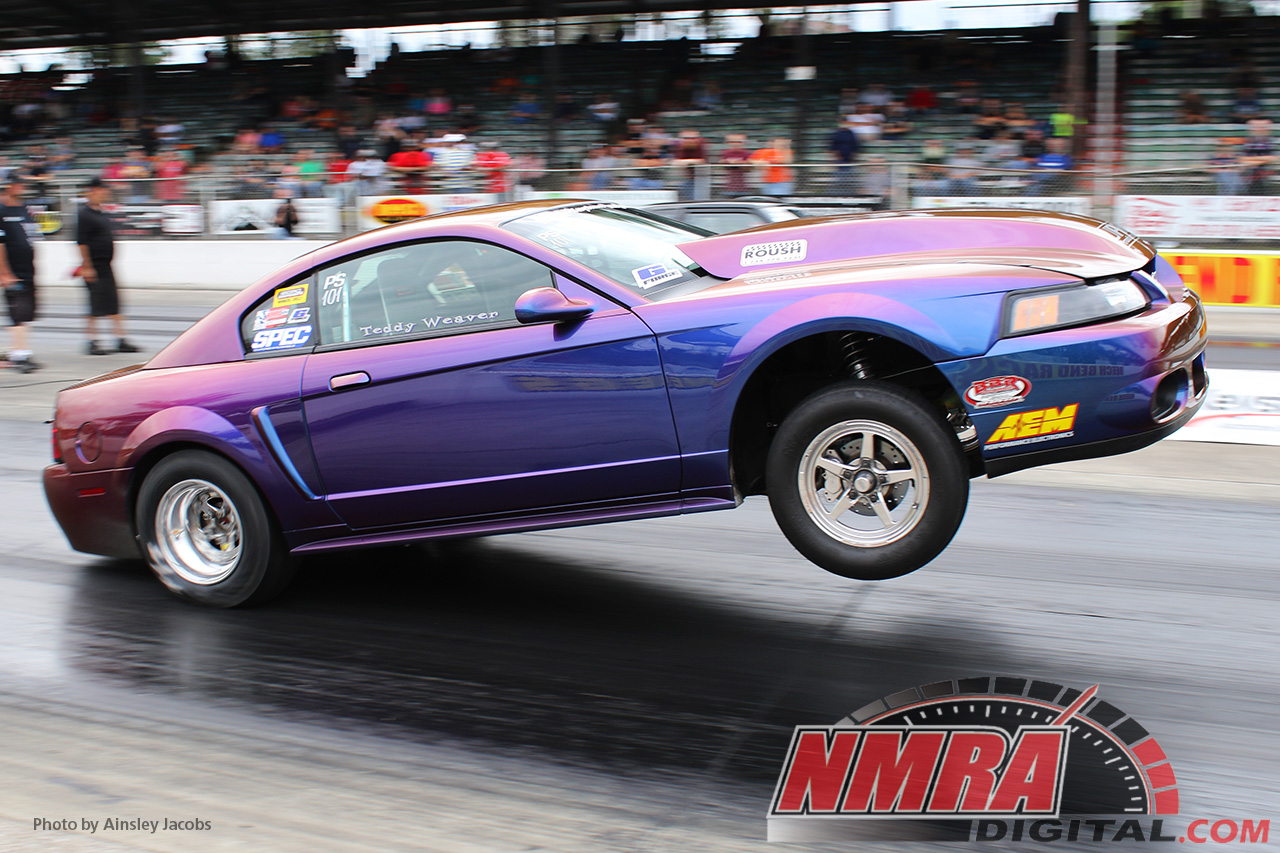 All good things must come to an end and we concluded the 2016 NMRA season with the 18th Annual Nitto Tire NMRA World Finals at Beech Bend Raceway Park in Bowling Green, Kentucky. With one last chance to accrue crucial championship points, racers were going all out in hopes of going big, or simply going home. Despite initial rain delays, the race wrapped up in a big way as six heads-up and five index champions were crowed as the sun dipped into the horizon on Sunday.

The baddest of the bad came to go rounds in VP Racing Fuels Street Outlaw. After two rounds of rain-shortened qualifying, Joel Greathouse driving Charles Hull's turbocharged 92 Mustang took the top spot with a 4.439 at 170.92 mph pass. In eliminations, it was last year's champion Phil Hines with his ProCharged '01 Mustang who got the final word when it came to winning as he defeated Greathouse who uncharacteristically rolled the beams and allowed Hines to cruise to victory.

It was Aaron Bates who ranked first in qualifying with a class-leading 7.449 at 178.95 mph pass from his ProCharged 87 Mustang in Edelbrock Renegade. Then, for all the marbles, the Massachsetts-based racer continued on to hit the stripe first for four consecutive rounds and took out Adam Arndt in the finals in an extremely tight race. For his efforts, Bates earned an all-expenses paid trip to the highly-coveted Aerospace Components Winner's Circle.

Teddy Weaver's name and a 9.644 at 138.44 mph number topped the list after qualifying had been completed for G-Force Racing Transmissions Pure Street. Weaver was unstoppable all through eliminations, and the man from Stafford, Virginia took home the win for the weekend with his SPEC clutch-equipped 01 Mustang after defeating Shawn Johnson in the finals.

The 14 Cobra Jet belonging to John Kauderer clocked a 7.812 17006 mph run during qualifying in ProCharger Coyote Modified to secure the coveted number one spot. From there, it was all about Haley James as the Hellion Racing B-Team driver from Albuquerque, New Mexico piloted her turbocharged 93 Mustang straight through to a victory in the final elimination round against Joe Guertin. Both drivers ran 7.8-second elapsed times, but James had a hole shot advantage and was two-hundredths quicker.

The stocker categories of American Racing Headers Factory Stock and Race Pages Coyote Stock both featured tough competition, but it was James Meredith and his 03 Mach 1 on a 10.466 at 125.40 mph blast in Factory Stock and Darin Hendricks with a 10.217 at 130.23 mph run from his 93 Cobra in Coyote Stock who took the number one qualifying positions. Eliminations were fiercely contested, but the last men standing in their respective classes were Meredith and Shane Stymiest.

Last season's points runner up Jimmy Cantrell bested the field in Detroit Locker Truck & Lightning when he cut a 0.005-second light during qualifying. From there, it was all about Randy Conway from South Rockwood, MI and his menacing 84 Ranger as he turned on the win light in his lane with a 10.565 up against Gerry VanVeen. Donnie Bowles, the Exedy Racing Clutch Modular Muscle 2015 champion, scored the number one qualifying position when he pulled off a 0.013-second reaction time with his 05 Mustang. By late Sunday night, Shane Williams was the last man standing when he pushed his 99 Mustang to run a final time of 11.785 on a 11.76 index to defeat Bowles' 9.971 on a 9.94 index. John Mummery and his 07 Mustang hit a 0.027-second reaction time preparing for Roush Performance Super Stang. The final pair to run during eliminations was Chris Parisi of Jacksonville, Florida and Dave Liechty, but the win went to Parisi when he ran a 14.275 on his 14.25 over Liechty's 11.274 on a 11.20. The large group of more than 40 cars entered into the Flex-a-Lite Open Comp class offered some serious competition, but Dana Tebay lead the group going into eliminations as she had cut a 0.002-second light earlier in the weekend with her 65 Mustang. Dennis Corn, however, took the overall win with him back to Northville, Michigan, when his 88 Thunderbird put in a winning run in the finals with Tim Hamilton in the opposing lane. Running a 12.521-second pass on his 12.50 index, Lloyd Mikeksa was the closest to his number during Race Pages Ford Muscle qualifying. From there, Tom Osterkamp of Hereford, Texas's relentless run at success was fruitful as he clicked off a 10.042-second pass on a 10.00 dial in with his 12 Mustang to take the win away from Danny Towe. Multiple winners are derived from a massive, 140+ QA1 True Street field but Overall Win bragging rights went to Troy Messamore of Madisonville, Kentucky whose 1993 Mustang was the quickest of all. Earning an 8.055-second average with a first run of 8.210 and a second of 7.900, Messamore was the overall winner. Hot on his heels to earn the runner-up title was Jeremiah McGreevy, while Nicolas Shortridge took the win in the 9-second category. Chad Evans was the quickest of the 10-second group, while Tim Bradshaw did the honors for the 11-second racers. For the 12-second average, Randy Rosner was the winner, followed by Jason Epstein for the 13-second group, Kristen Kelly for the 14-second group, and Belinda Moore for the 15-second group. The new ididit Outlaw True Street class is a part of NMRA's Grudge Night and is a special street car challenge in the no time format. Taking the inaugural title was Tim Oswalt who hails from Tennessee and defeated Raul Torres in the final round to score the inaugural title and a $2,500 payout. More than thirty entries in QA1 True Street qualified for a in the TREMEC Stick Shift Shootout , but ultimately established Nicolas Shortridge of San Antonio, Texas as the quickest manually-shifted Mustang of the bunch. The top two stick-shift cars in True Street duke it out in a heads-up race and Shortridge took the win 0ver Mike Niehaus as well as a brand new TREMEC transmission. The turbocharged Cobra ran 9.353 at 151.15 mph in the shootout.

Boost is king in the VMP Superchargers Terminator / GT500 Shootout. In the sibling rivalry, Brian Devilbiss scored one for team GT500 during qualifying when he took the number one spot with his 13 GT500 on a 7.386 at 189.10 mph hit. The final round pitted a Terminator against a Shelby GT500, and it was Devilbiss who reached the big end first with a 7.461 t 188.96 mph hit to officially bookend his season with wins in the class.

The fastest late-model Fords on the planet came together for this installment of the Henchman Racing Turbo Coyote Shootout, and Bret Stabler topped the qualifying field as the only driver to break into the 4-second zone when he ran 4.965 at 145.97 mph with his 11 Mustang. Meanwhile, Justin Jordan of Riverview, Florida, had confidence in his 14 Mustang and the car lived up to expectations, giving Jordan a final run of 4.994 at 145.88 mph to trigger the win lights in his lane as Stabler took the runner up spot. In the Livernois Motorsports EcoBoost Battle, Bill Putnam set the quickest elapsed time during qualifying when he ran the quarter mile in 10.245-seconds at 134.10 mph with his 15 Mustang. It was Brad Gusler of Big Island, Virginia, however, who made it count when he won the last elimination match of the night in his 15 EcoBoost Mustang with an easy win over Alexis Fruggiero. In the bracket categories, Derrick Cornish of Lawrenceburg, Kentucky and his 87 Mustang won Bracket 1, Gary Parker of Villa Rica, Georgia won Bracket 2, and Clifford Moore of Chicago Heights, Illinois won Bracket 3 with his 95 Mustang. While we wait for the championship results to be finalized, the following drivers have been given preliminary titles: Phil Hines (Street Outlaw), Aaron Bates (Renegade), Joe Guertin (Coyote Modified), Teddy Weaver (Pure Street), Shane Stymiest or Drew Lyons (still TBD in Coyote Stock), James Meredith (Factory Stock), Donnie Bowles (Modular Muscle), Dennis Corn (Open Comp), Randy Conway (Truck & Lightning), Marvin Knack (Super Stang), and Danny Towe (Ford Muscle). Congratulations to all on another most excellent year of racing, and we'll see you in just a few months as the 2017 season kicks off in March at Florida's Bradenton Motorsports Park!