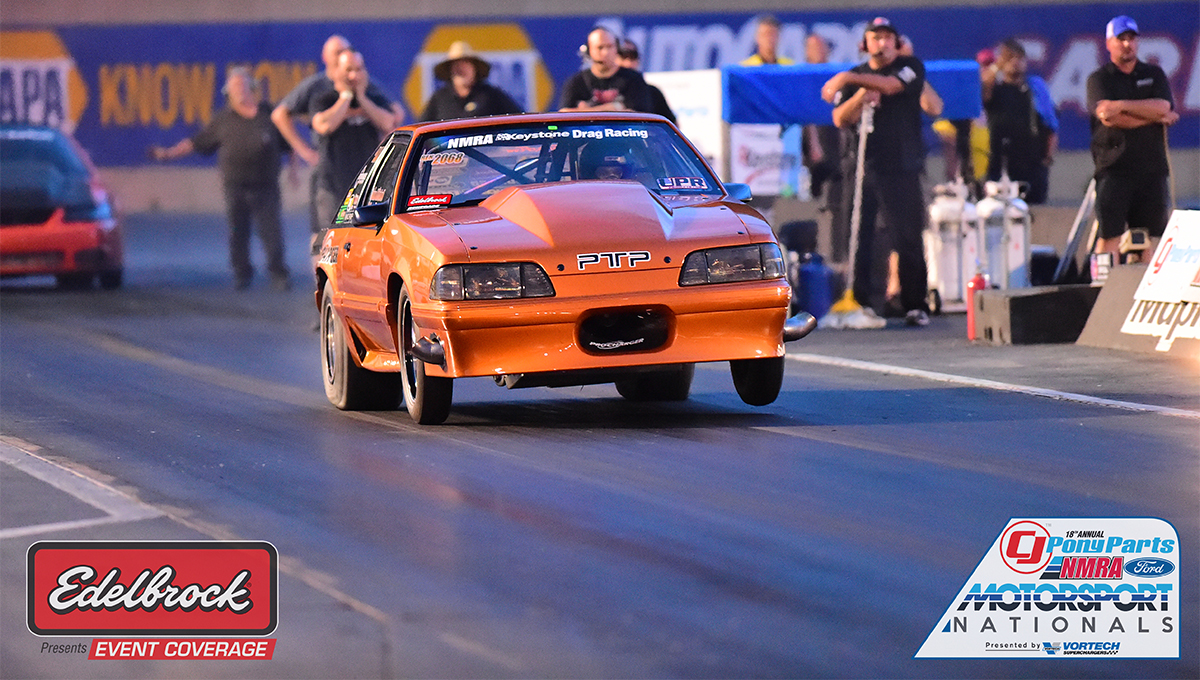 The sun is out and the weather report claims it to be partly cloudy, which means we are finishing qualifying this morning and jumping right into eliminations. The plan is to finish the 18th annual CJ Pony Parts NMRA Ford Motorsport Nationals presented by Vortech Superchargers today, weather and time permitting as there is an 11PM curfew in place for Maple Grove Raceway. Brian Mitchell (pictured above) began racing Edelbrock Renegade 20 years ago and to celebrate he is the provisional number one qualifier with a stout 7.419 at 183.79 mph. He continues to drive Adam Arndt's impressive copper-hued 1990 Mustang GT with a 390ci engine combination. A ProCharger F-1A-94 is the boost maker of choice for the team. 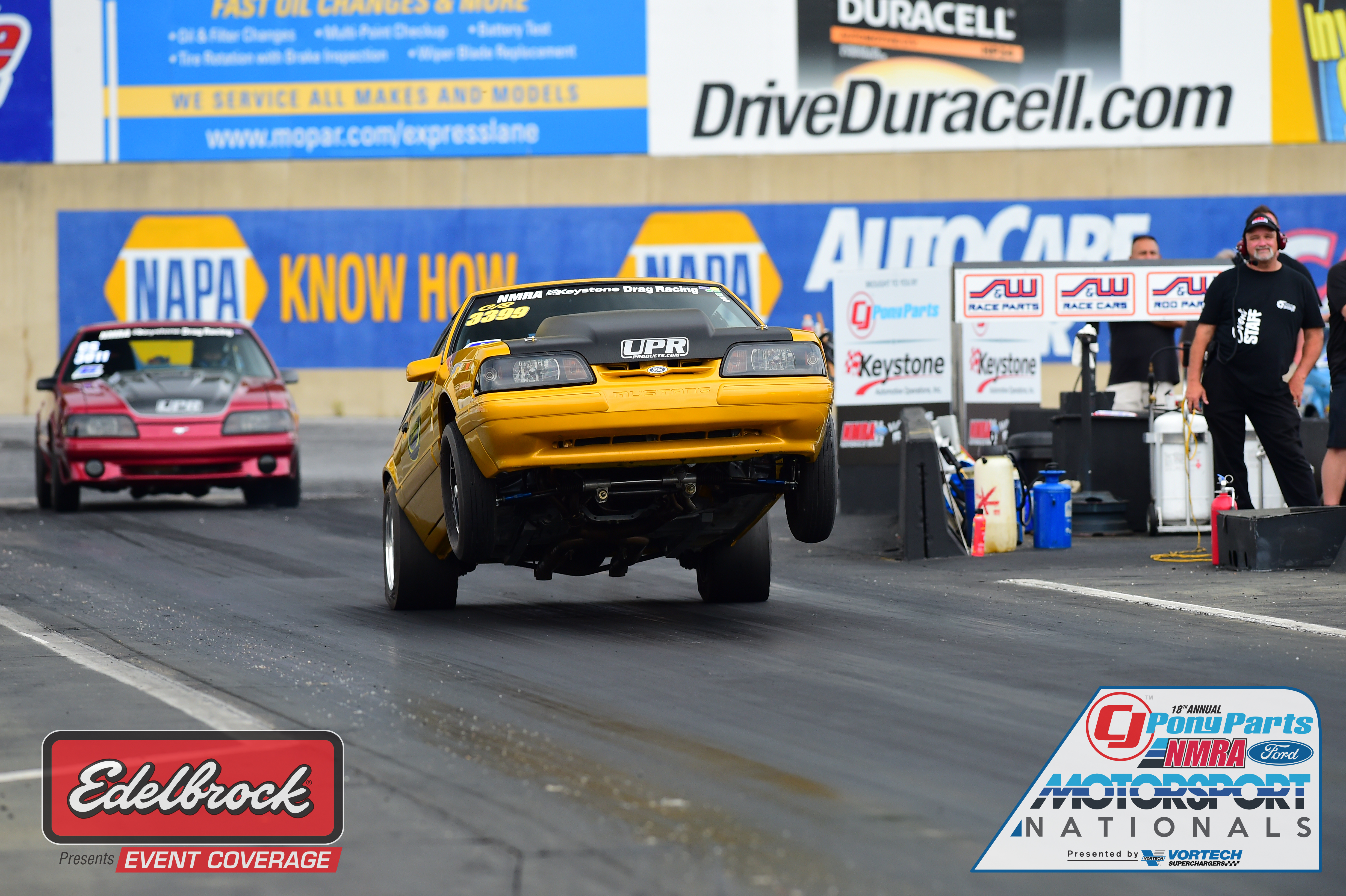 Charlie Booze Jr. of Booze Brothers Racing is the provisional top qualifier in G-Force Racing Transmission Coyote Stock. He is once again behind the wheel of Justin Foggelsonger's impressive 1986 Mustang LX coupe (with updated nose). The Gen 1 Coyote helped the car produce a 10.297 at 128.81 mph during the second round of qualifying. Hot on his heels is Jacob Lamb who stepped up big in the night air with a 10.327 at 128.13 mph. Sliding into third, after just two of three rounds, is new racer Steve Kurimchak with a 10.342 at 127.84 effort. 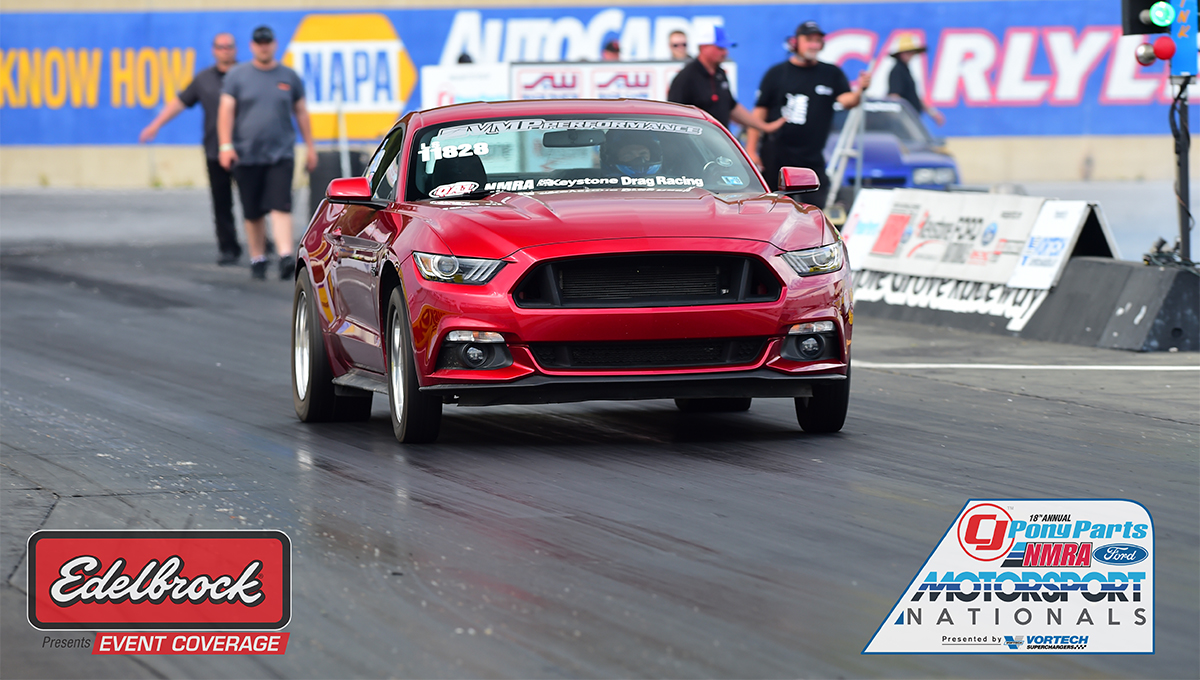 It might sound strange but Ben Calimer is racing an automatic-equipped Mustang! Long known for his prowess with the MT-82 manual, Calimer brought his VMP supercharged 2015 Mustang to the Ford Motorsport Nationals for some fun. We saw Calimer last month during the NMRA/NMCA All-Star Nationals where he was entered in QA1 True Street. He is competing in Steeda Limited Street this weekend, qualified in the low 10s right now but the car has gone 9.60s in the past. 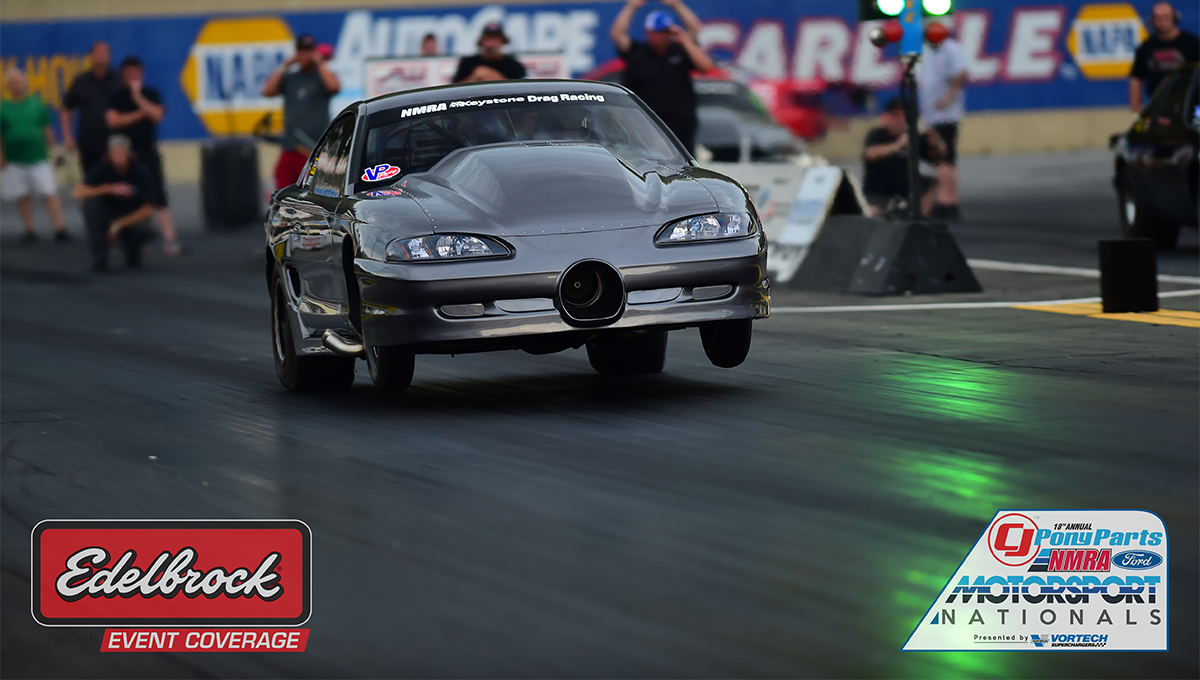 Andy Manson continues to have a stranglehold on the VP Racing Fuels Street Outlaw category with his 4.328 at 166.95 mph performance during the second round of qualifying on Friday night. New for this year is a DiSomma Racing Engines 470ci engine with a set of Edelbrock SC1 cylinder heads and custom billet intake manifold. Fastened to the front of the big small-block combination is a ProCharger F-1X-12R supercharger. 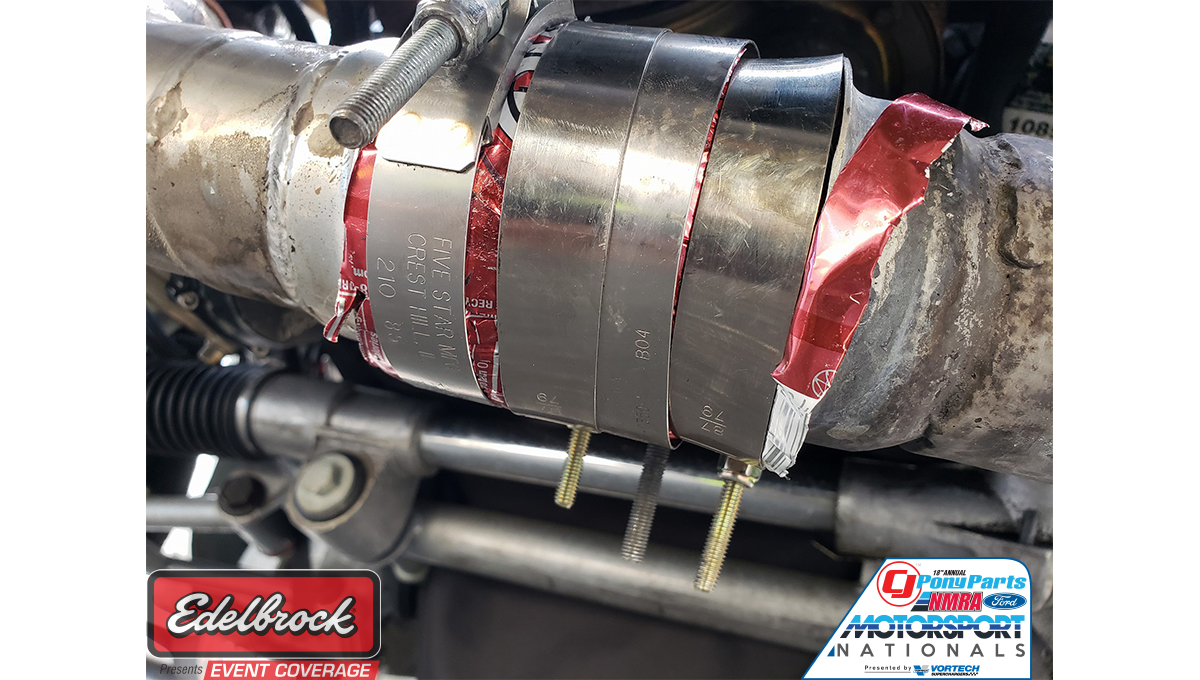 So what happens when you're Kelly Shotwell, you are undefeated in Steeda Limited Street, and you figure out that the crank trigger problem you're having is actually a hole in your cross-over The quick fix is to chug a can of Dr. Pepper and then cut it up so it can be used as a patch! Appareatnly the exhaust was blowing on the crank trigger sensor, causing it to have a bad reading. Shotwell gave up the 5-cent return in order to keep his Cobra at the top of the field and chase after a third straight win. The repairs helped him go from dead last on the list to the top of it with an 8.854 at 155.78 mph run and he completed his round one bye-run. 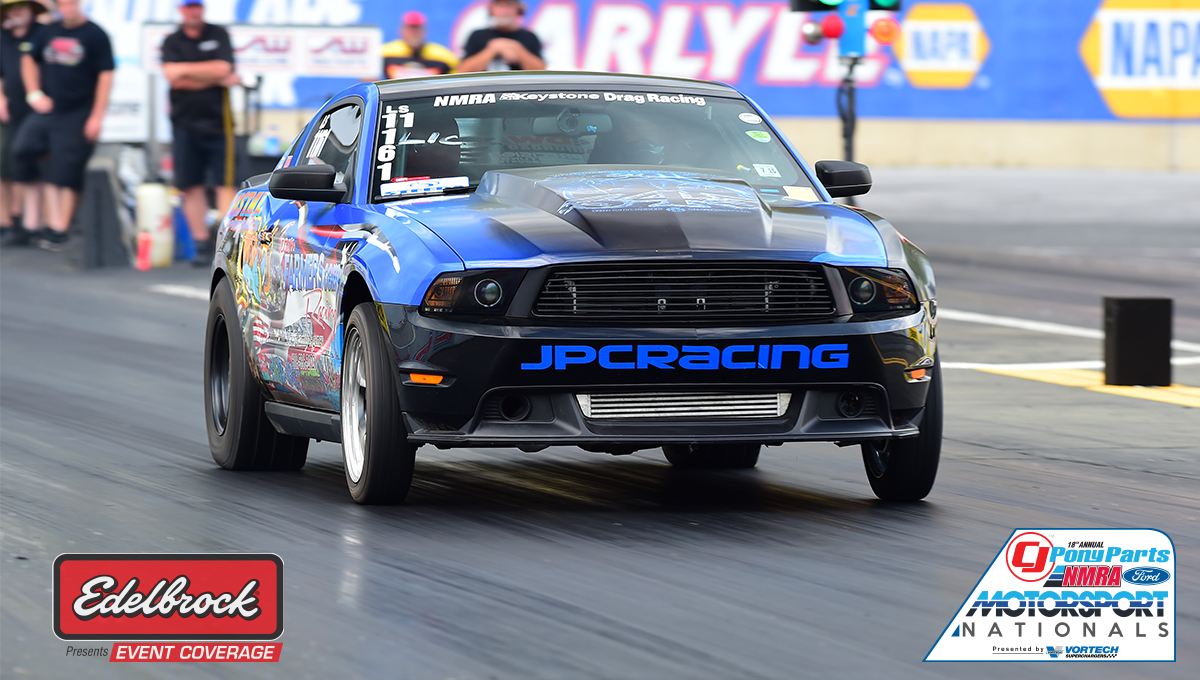 Al Davis had a rough outing last month during the NMRA/NMCA All-Star Nationals when he grazed the wall during the semifinals. JPC Racing teamed with Maryland Collision Center to fix the superficial damage. On the list of new parts includes the fender, nose, and one headlight assembly. The team swapped out the rear suspension, which utilized polyurethane bushings, for a complete BMR setup using solid ends. The team is adjusting the turbocharger Coyote setup to the new suspension setup and are looking to improve on their high 8-second runs. 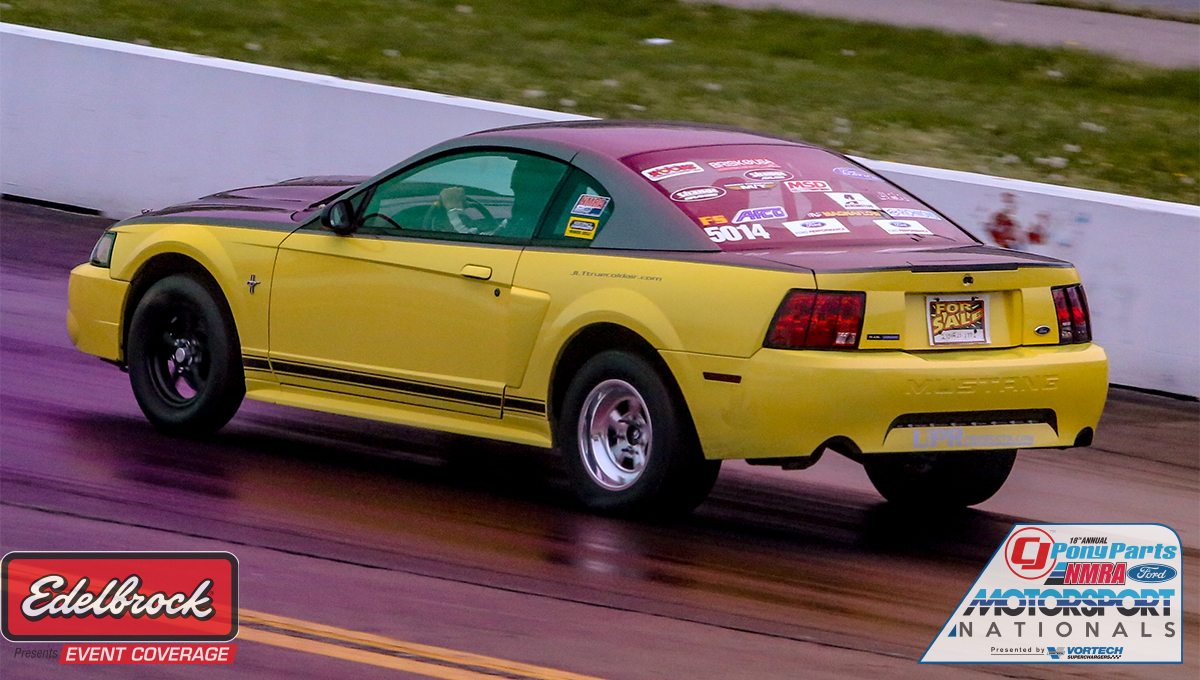 Shane Stymiest is a hired gun this weekend for Justin Foggelsonger's second car in NMRA competition. The Mach 1 belonged to James Meredith who is only the second person to ever go undefeated for an NMRA championship. Stymiest described some modifications as just waving their magic wand over the car. They also removed some weight due to a rule adjustment. The result was spectacular with a 10.317 at 129.37 from the Coyote/C4 combination. 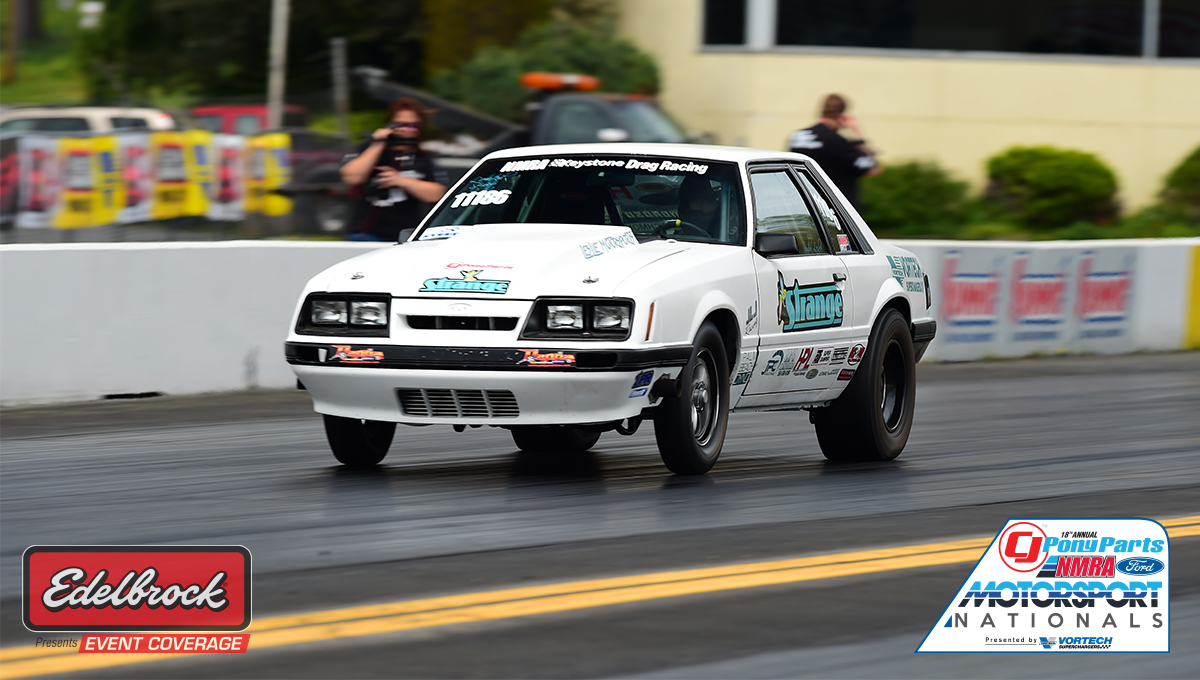 There is a new badass in Steeda Limited Street and her name is Sondra Leslie. In just her first race behind the wheel of the Strange Engineering/Vortech sponsored ride, she has dipped into the 8s with a best of 8.93 at just 144 mph. Her and tuner Ken Bjonnes are slowly sneaking up on the tune-up, but the car is already raising eyebrows. It is a Coyote 5.0 by MPR Race Engines and utilizes a Vortech Ti supercharger with an air-to-air intercooler. 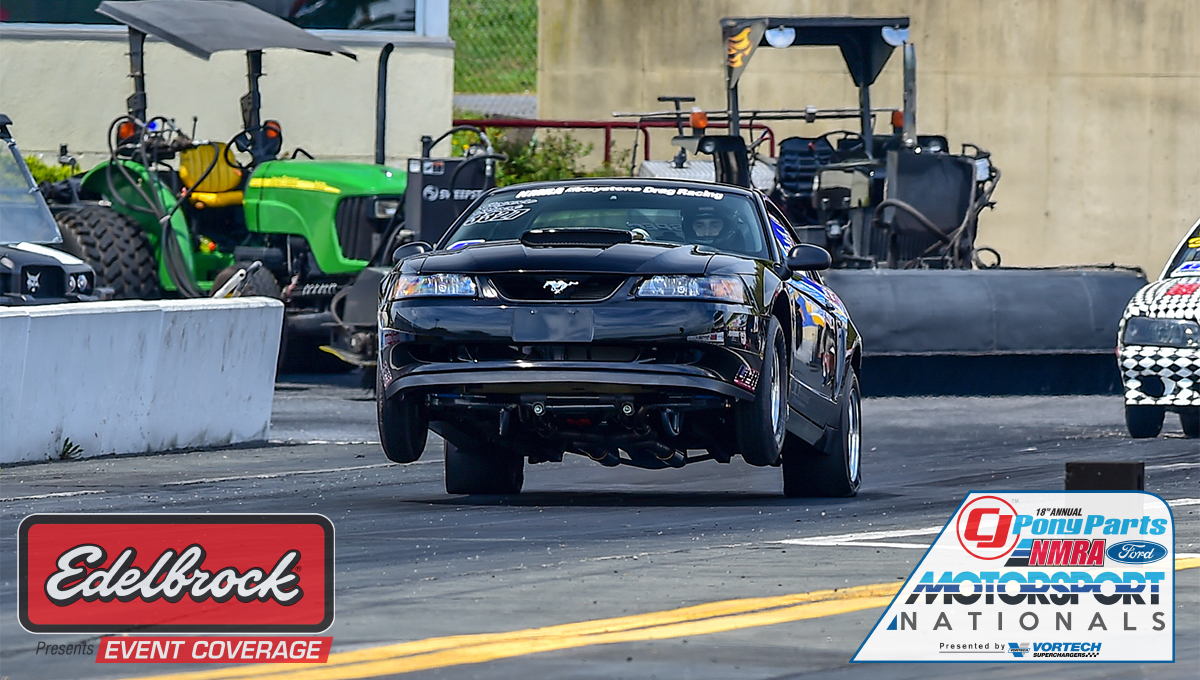 Steve Kurimchak is new to G-Force Racing Transmission Coyote Stock but he is quickly poking at the top players in the group. He qualified second with a 10.262 at 128.63 mph with a Gen 1 Coyote that acquired from Shane Stymiest. 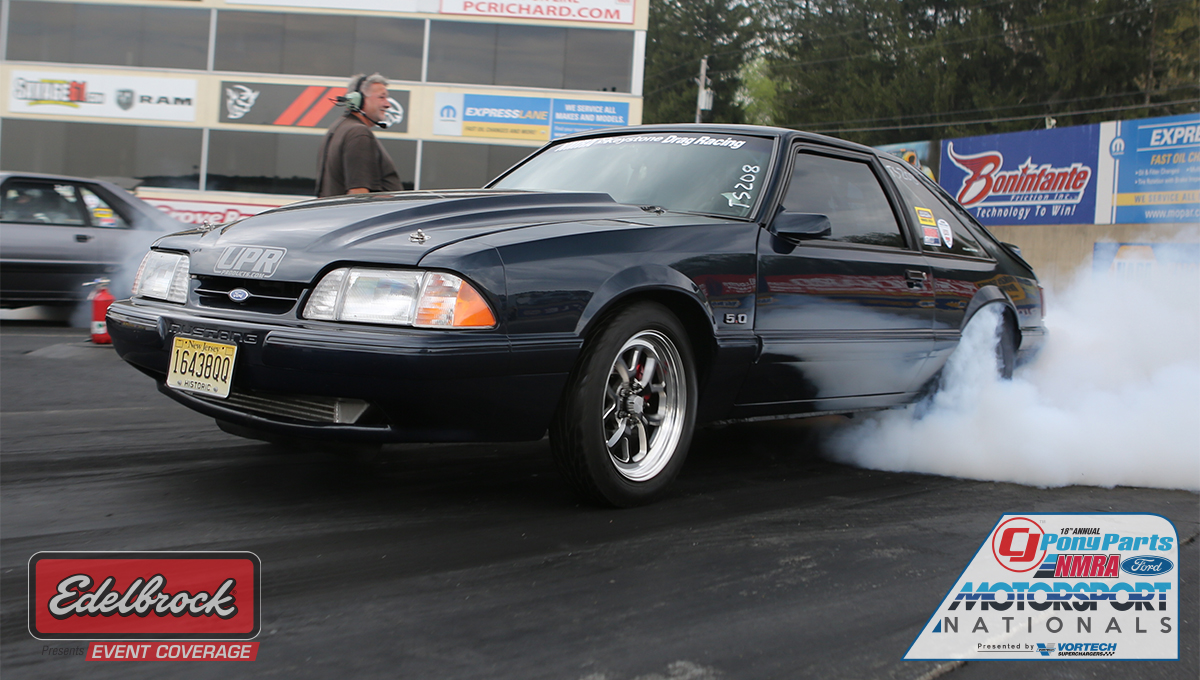 Mike Jovanis became an 8-time QA1 True Street winner by securing the victory with an awesome 8.113 average. The New Jersey racer began his journey to the Aerospace Components Winner's Circle with a 7.969 but bettered that run with a 7.816 in round two. A stutter on the starter line slowed him to an 8.553, but it was enough to take the win by a wide-margin. Michael Corrin was the runner-up finisher with a 9.454 average. Tim Schmoyer was the 9-second winner. Other wins came from Joseph Cascio (10-second), Nathan Seagrave (11-second), Chris Nusbaum (12-second), Trish Linkus (13-second), Christian Cornwell (14-second), and Jonathan Plumber (15-second). 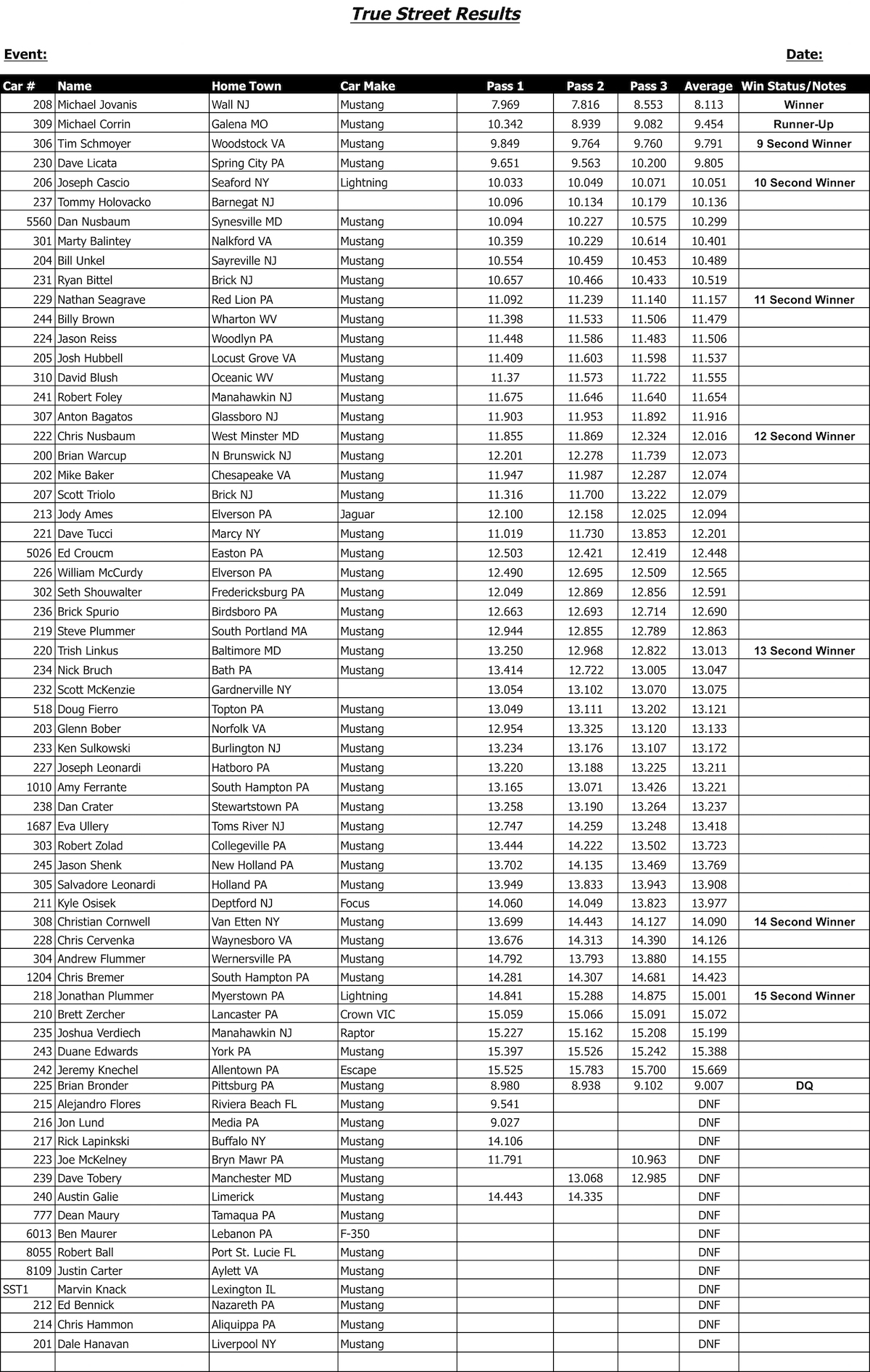 We are on hold for rain but are down to just 4 classes left in competition.