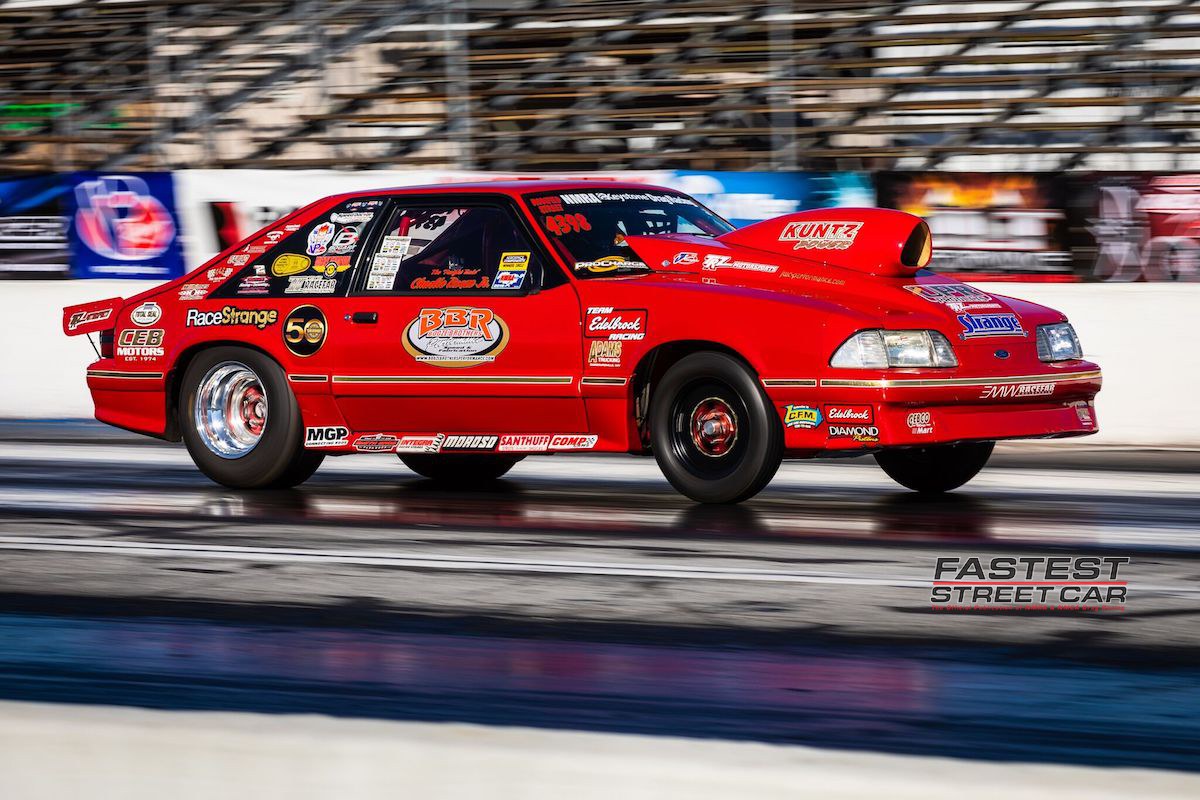 Charlie Booze Jr. has spent more than half of his life climbing into the cockpit of a race car.

He's well-versed on everything from wheelies to high-winding, and wins to wrapping up season championships, and proof of that is in his five NMRA Hot Street championships and two NMCA Pro Stock championships.

The Pennsylvania powerhouse is a legend in the world of naturally aspirated Ford Mustang racing who says things like I fiddle with my car to make it go faster, when actually, he carefully and cleverly crafts ways to make his car go faster.

Booze Jr., who has been driving Justin Fogelsonger's Mustang in NMRA G-Force Racing Transmissions Coyote Stock for the past few years, is always up for a challenge, and found his next one when the NMRA ProCharger Modified Street category was debuted in 2019.

He readied his Mustang, nicknamed the Freight Train, for the first race of the year, the 25th Annual Nitto NMRA Spring Break Shootout in March at Bradenton Motorsports Park in Florida, and he has been giving it everything he has to be competitive in the category where he's currently in fifth place in points as of this writing.

Booze Jr., who co-owns Booze Brothers Racing with his brother and fellow racer, Brian Booze, recently talked with Fastest Street Car about his past, his present and his pursuits. 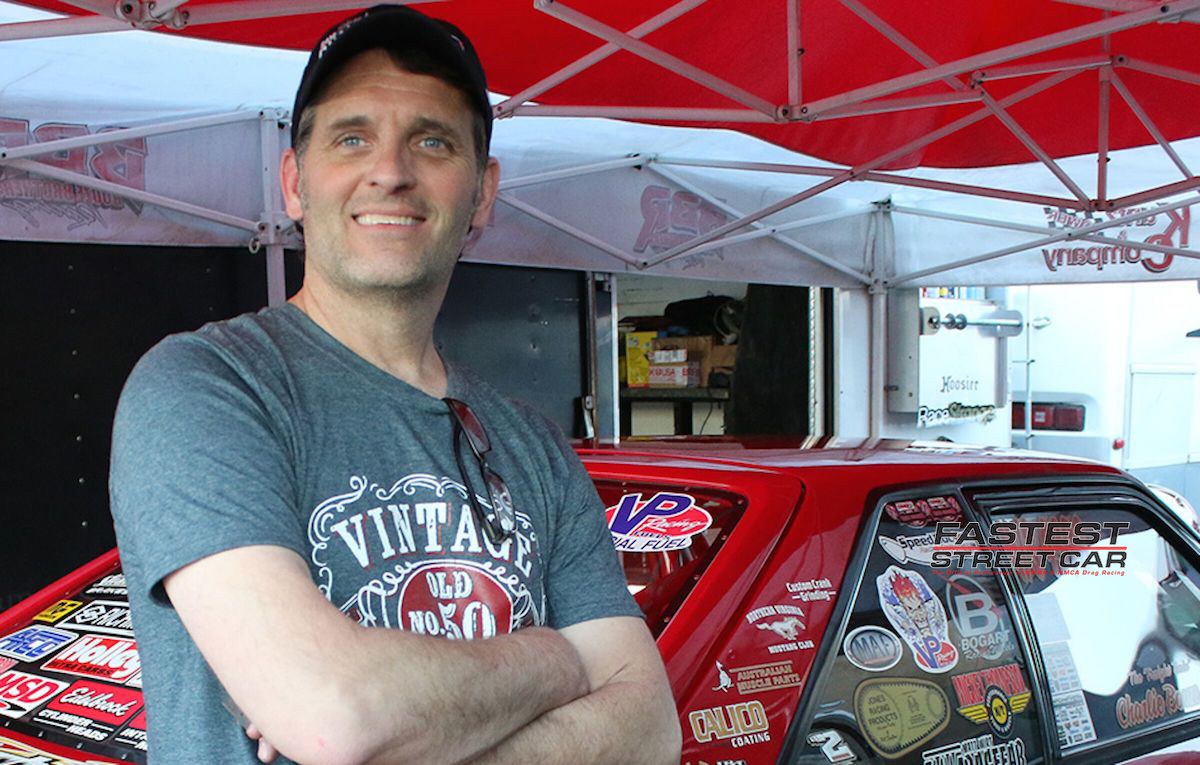 My brother, Brian, and I had been racing our older Fords, and we had been watching the NMRA Hot Street class from afar, along with my longtime engine-builder, Jim Kuntz. Jim was the one who was on us hard to take a look at the class. From there, it was a group effort between me, my brother, Brian, and Jim, who very sadly, recently passed away. We had a solid plan. We had help from Matt Wirt on the chassis of the red Mustang that we had chosen to compete in, and we went with a 400 cubic-inch small-block Ford and Edelbrock Victor heads, and we had ProSystems, Braswell and CFM carburetors as well as Powerglide, Turbo 400 and ProFlite transmissions.

YOU WERE COMPETITIVE OUT OF THE GATE. WHAT DID IT TAKE

We went to the track as much as we could to test. We asked a lot of questions, and we gathered a lot of opinions, and we had to decide what to use or not use. We tried a lot of combinations, including various engine sizes, and various transmissions, to make it work. It was a lot of work, and it took a lot of money and dedication. There was constant maintenance, including checking things over many, many times. We ran a best of 8.38 in NMRA Hot Street, and it was a record pass, and we also ran in NMCA Pro Stock, where we ran a best of 8.35, and NMCA NA 10.5. In addition to winning five championships in NMRA Hot Street, we won two championships in NMCA Pro Stock. To date, the car has 87 event wins.

AFTER NMRA HOT STREET, YOU TRIED ULTRA STREET. HOW DID THAT GO

Well, they wanted me to cover all of the stickers on the Mustang, and after we did, the car looked like the Starsky and Hutch Torino with the white stripes on it. We had the car running 4.90s in the eighth-mile, and we were still running slicks at the time. We had a smoking good chance to win in Ultra Street at the Yellow Bullet Nationals in 2014, but I chose the wrong gear for the car and lost in the semifinal. I fiddled with Ultra Street for three years, 2014 through 2016.

Yes. I started getting involved with Justin s car, Goldzilla, in 2017. I've known Justin since the mid 1990s. He's a fellow Mustang guy who lives ten minutes away from me. He has had the same Mustang since the mid 1990s. It's a 1986 model but he had changed the taillights and front fascia. We were friends, and he came to me in late 2016 and asked me to help him finish the car. The Gen 1 Coyote engine was in it, and he had the fuel system and the Gen 1 wiring package installed, and that was it. He was struggling time-wise to get the car done. I had already done an 8.8 rear-end for him, and we installed that and the G1010A transmission and we welded tabs on the frame, ran brake lines, braced up torque boxes and installed struts. He's a mason who works a lot of hours, and he didn't have a lot of time to commit to working on the car after work. We had decided that I would drive the car in NMRA Coyote Stock early on and then turn the reigns over to him, which still hasn't really happened. 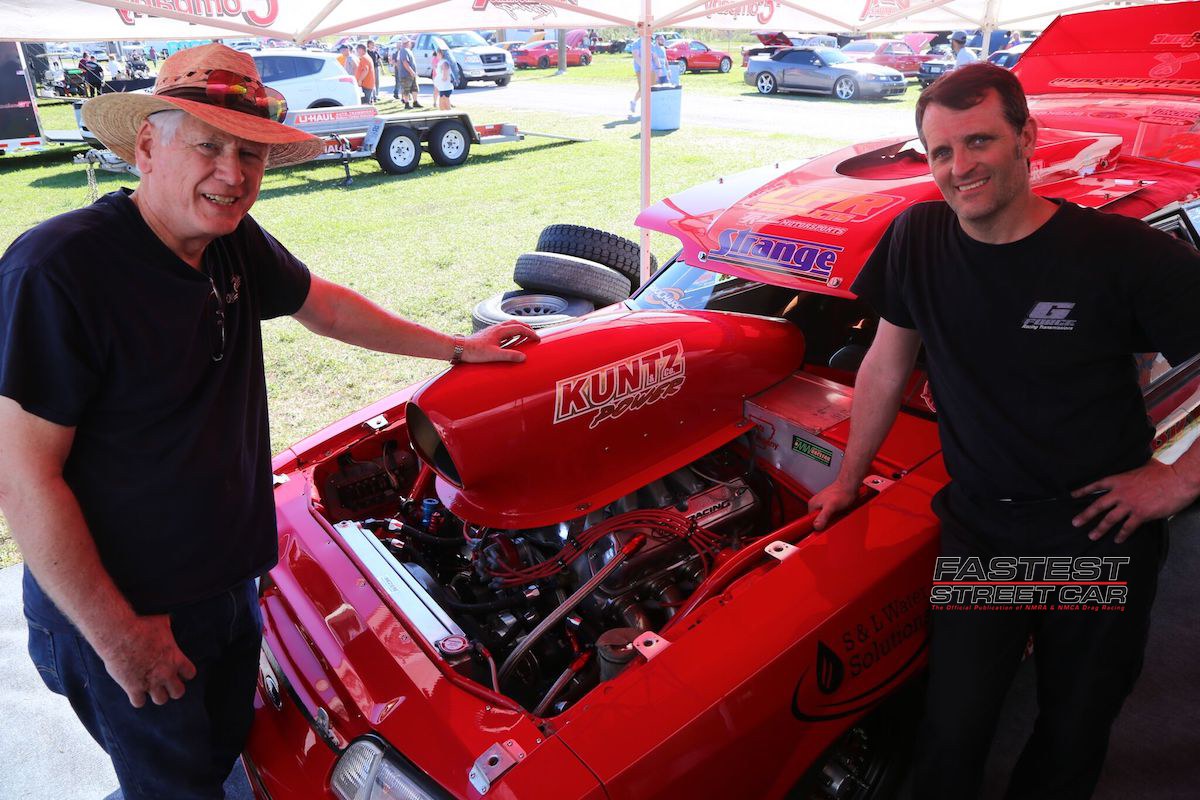 WHEN WAS THE CAR READY TO RACE

We were up all night before the NMRA race at Maple Grove Raceway in Pennsylvania in 2017. When we got there, we made one pass and then it rained all weekend. So, we got to test the car before going to the NMRA race at National Trail Raceway in Ohio, and we made it to the runner-up finish there. We raced four out of six NMRA events that year and finished fourth in points, and then we raced four out of six NMRA events in 2018 and finished sixth in points, and we finished as the runner-up at some and won some. We've gone as quick as 10.13 in NMRA trim. It's a fun car to race.

YOU VE HAD SUCCESS RACING THE CAR IN NA FACTORY AT MASON DIXON DRAGWAY IN MARYLAND, HAVEN T YOU

Yes, we have. We made some changes to the car, and competed at three events thus far. Goldzilla made it to all three finals, and won the most recent in August. The first two were ended by rain in the final and the last one we won outright because the finalist didn't make the call. It's a fun class to race as it has good parity.

WHEN NMRA ANNOUNCED IN LATE 2018 THAT THE NEW PROCHARGER MODIFIED STREET CATEGORY WOULD BE DEBUTED IN 2019, WERE YOU IMMEDIATELY INTERESTED

My Mustang didn't fit the NMRA Limited Street rules because of my ladder bars and the size of my engine, so when preliminary Modified Street rules came out in late 2018, I knew I could run 7.90s and that there could be parity in the class if things were kept in check. I was very excited about the class because it had been a while since I had competed in my Mustang. Jim Kuntz was excited and my sponsors were also excited to see Big Red coming back out.

MANY PEOPLE WERE HAPPY TO HEAR THAT YOU WOULD RUN YOUR FAMILIAR RED MUSTANG IN THE NEW CATEGORY. WHAT WAS INVOLVED IN PREPPING IT FOR PROCHARGER MODIFIED STREET

I looked things over, made sure the fuel cell was clean and the battery was working. I had switched from slicks to 275 drag radials in 2014, after my buddy Scott Parson shamed me into trying them and called me names until I did. I had the engine that I had used in NMCA NA 10.5, so I didn't have to do too much for that. They allowed as big as 440 cubic-inches, and I had a 420 cubic-inch Kuntz engine with Edelbrock Victor heads and a 438 cubic-inch Kuntz engine with a Wilson's sheet metal intake. We also had CHI intakes for both and we swapped them back and forth, and we had my old ProFlite transmission with a Neal Chance converter. We went to the first NMRA race of the year at Bradenton Motorsports Park in Florida, and I had my 420 cubic-inch engine in the car, but it had a main bearing problem at the race and we had to switch to my 438 cubic-inch engine. We had all kinds of trouble. That wasn't good for our first race in the class because I knew the 420 package better and had all of my notes on it. I ran an 8.11 to qualify in the third spot, but lost in the second round. I had a lot of help that weekend from my friend, Bill Perkins, or Perky, Casey Wilcox and his father-in-law, Mac, and Jim Kuntz, and had swapped the engines at David Cannon's shop, which wasn't too far from the track. 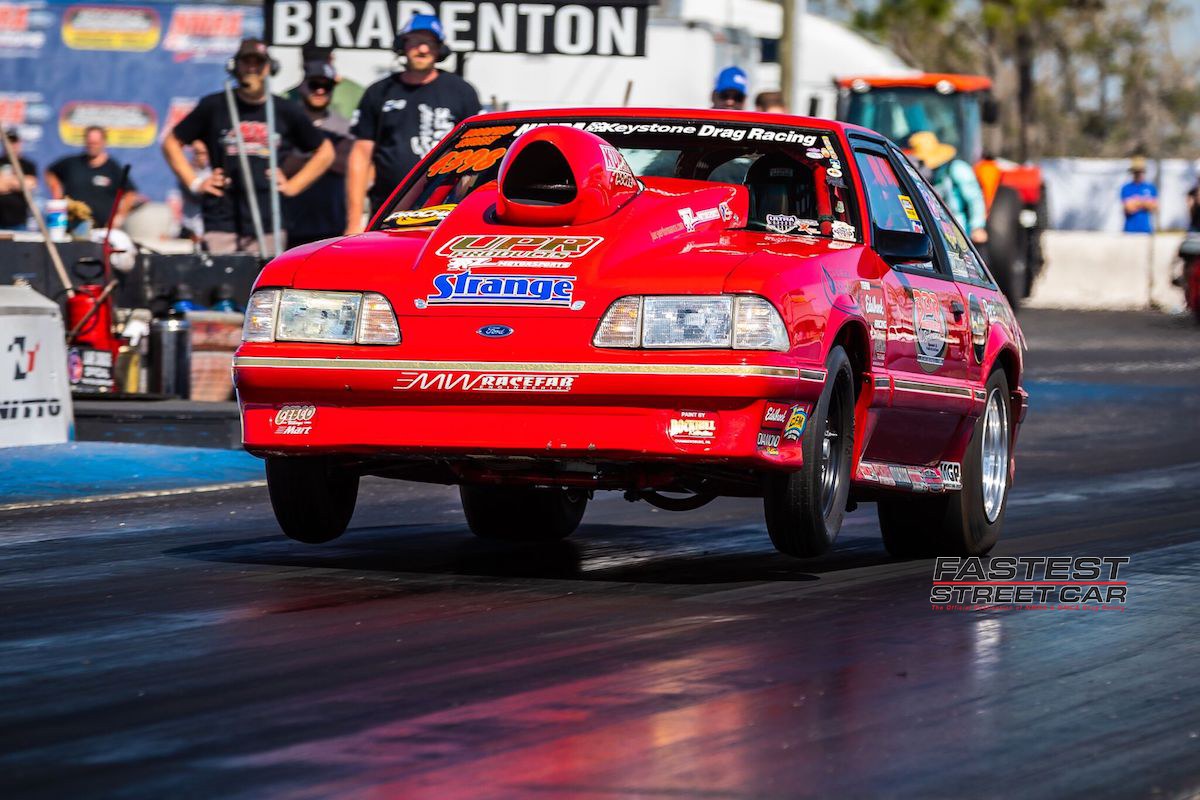 The first pass felt kind of funny because it had been a while, and because of how quick it is in the 60-foot and how many G-forces it pulls, but you know, it still felt like home, honestly, because I had been in the car so many times through the years and had won in it so many times through the years. It all came right back to me. We went to the NMRA/NMCA race at Atlanta Dragway the following month, and qualified in the third spot with a 7.96, and we lost in the semifinal to a blower car. We skipped the NMRA race at Gateway Motorsports Park because that was around the time Jim Kuntz died from a brain aneurism and I went to the funeral in Little Rock, Arkansas, and then we struggled at the NMRA race at Maple Grove Raceway. We made five passes and on two of them, blew the tires, but I did go 7.98 there even though it was so hot and humid, and I was stoked about that. We didn't go to the NMRA/NMCA race at Route 66 Raceway, but we're preparing for the next race.

WHAT MAKES YOU REMAIN FAITHFUL TO YOUR NATURALLY ASPIRATED COMBINATION

In my opinion, it's what racing was founded on. It's engine-to-engine, carb to carb. It's about having the ability to get the most out of the combination that you possibly can. It's about racing the engine and the design of the engine, and racing the heads and the design of the heads. That's what I'm interested in. I don't have a fire in my belly when it comes to power-adders.

I turned 50 in April, and I had been racing with Jim half my life. He was my engine-builder, my friend and my mentor, and he was like a second father to me. We would literally have discussions and arguments like we were kin. We talked about all kinds of things. We never ran out of topics. He did so much for us, and the last ten years of our racing, he was vested financially as well as emotionally and physically with the labor. You know, for his birthday, he joked that he was either going to buy a Corvette to drive or build a Hot Street engine for me to race, and he asked what I thought, and I laughed and told him it was a stupid question. Well, he ended up doing both, and I'm glad he did.

WHO HELPS YOU ALONG THE WAY

My entire family, including my daughter, Anna Katherine, who is now 11, as well as Justin Fogelsonger and his family. I appreciate all of the support from Strange Engineering, Bogart Racing Wheels, S&L Water Solutions, Marty Chance, Kuntz and Company, Aeromotive, Mickey Thompson, VP Racing Fuels, Dale Cubic of CFM, UPR, Santhuff's, Edelbrock, Coan Engineering, AutoMeter and the rest of my fans and friends. (Interview in the November 2019 issue of Fastest Street Car) 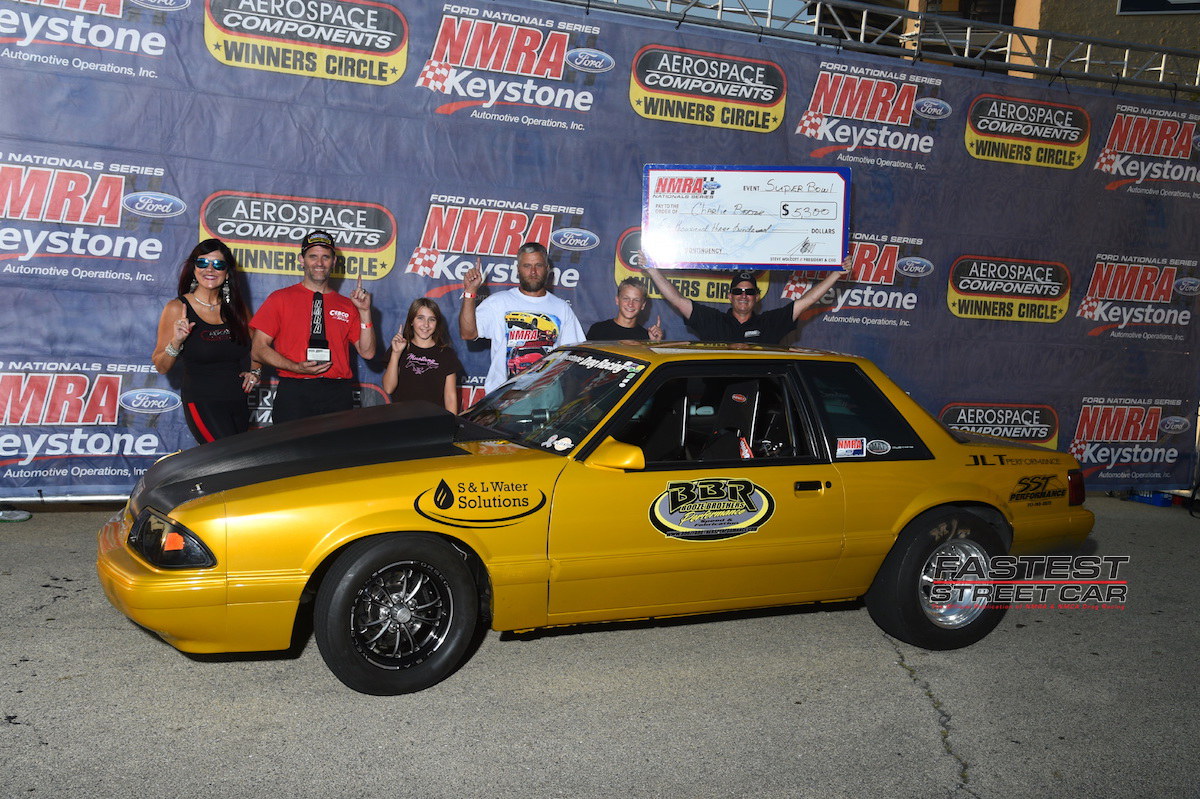