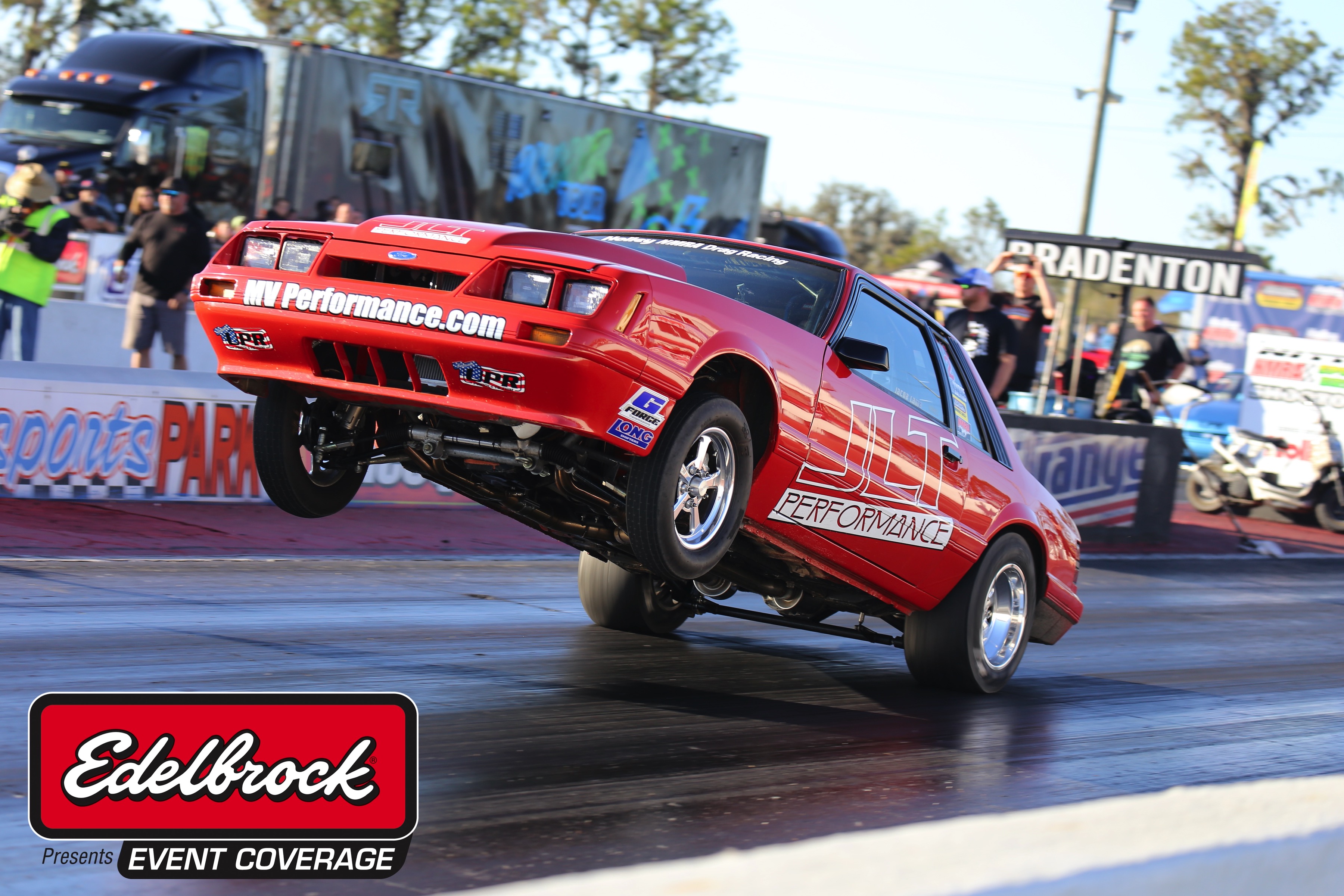 Today is the big day at Bradenton Motorsports Park as racing charges into eliminations at the 26th Annual Nitto Tire NMRA Spring Break Shootout. All the heads-up and index classes will crown champions today and send the victors to the Aerospace Components Winner's Circle to celebrate. Stay tuned all day for updates from the track as the action unfolds.

Seller's remorse isn't definitely a thing when it comes to cars. Adam and Becky Moldenhauer got nostalgic for their SN-95 racer, and bought it back from the purchaser who never ran the car. Adam built every inch of the converted V6 1984 Stang, which now runs a 347 stroker, a C6 transmission, and a 9-inch rear. Racing out of the Big Homie Performance stable, the couple added a striking wrap to the car before the event and were having a blast at the 26th Annual Nitto Tire NMRA Spring Break Shootout. Adam gave Cameron Bowles a scare in the first round of ARP Open Comp but lost. To continue the fun they stuck around to run brackets today.

With a freshly lightened setup, Edelbrock Performance Renegade racer Eric Bardekoff didn't expect to see his 2016 Cobra Jet run in the 4.70 ET range this weekend, but his team adjusted the suspension and had the car running right down Broadway at the 26th Annual Nitto Tire NMRA Spring Break Shootout. Running an off-the-shelf Whipple supercharger, the car is competing with more aggressive combos on the strength of its 60-foot times. Bardekoff planned to throw a bit more at it in eliminations, but he says this weekend taught the team a lot that they can improve upon for the 12th Annual Scoggin-Dickey Parts Center NMRA/NMCA All-Star Nationals next month.

The owner of this 1971 Maverick Grabber since he was 19, Greg Essen quickly transformed it from his wife's daily driver into a drag car. These days it runs in ARP Open Comp with a 514-cube Ford Performance crate engine backed by a Performance Automatic C4 auto and a Chassis Engineering 9-inch rear. He misread the air and went out in round one, but the Maverick looked great in action at the 26th Annual Nitto Tire NMRA Spring Break Shootout.

Chasing traction heading into eliminations, JDM Engineering Limited Street racer Samantha Moore refined her combo in the off-season, courtesy of a Coan Engineering-prepped transmission and some fresh suspension bushings, before making the 23-hour drive to Florida from Michigan. In qualifying the car powered by a VMP TVS-boosted Coyote engine breathing through a JLT Performance cold-air intake hooked well and delivered its best ET yet an 8.54.

Repping Steeda's Hardcore line of drag gear for the latest Mustangs at the 26th Annual Nitto Tire NMRA Spring Break Shootout, Scott Boda piloted the company's famed Silver Bullet S550 in QA1 True Street. Before the event, the Steeda team updated the car with 29-inch-tall tires, a Strange spool, G-Force axles, and a set of Billet Specialties Winlite wheels, which dropped 25 pounds from the car. In competition, he clicked off three back-to-back runs resulting in a 10.12-second average.

If your name is Mike Fox, what else would you drive Spotted on display in the UPR Products Car Show, his 1990 Mustang LX still rocks the factory paint and interior, but it also carries a long list of period-correct mods, including a Cobra intake, ceramic-coated short-tube headers, a 70mm BBK throttle body, and 73mm C&L mass air housing.

There are plenty of vendors on the property this weekend offering parts and expertise for your street cars, race cars, and project vehicles. Among those vendors, of course, the NMRA Power Mall, where you can score sweet NMRA swag and the ever-popular event T-shirts.

Three years in the making, Rob Thompson's 2001 Mustang GT is a far cry from the bolt-on machine he brought to this event four years ago. He transformed the car, in which he and his wife went on their first date, into a clean machine. This Cobra-style Mustang, that we spotted in the UPR Products Car Show, is powered by a 2014 Coyote engine boosted by a Gen 3 Whipple supercharger. Running a Palm Beach Dyno tune, it puts down 734 horsepower to the tire and rides on sharp Forgestar D5 wheels.

Shelby Mather comes from a serious Ford family. After all, his dad's name is Shelby Carroll Mather, so you know who they are both named after. Shelby races his 1971 Maverick in the Ford Muscle class. It runs mid-nines courtesy of a Windsor/C-4 auto/9-inch combo, but Mathers said the real reason they built it is to bring the family together at the track and have fun.

Walter Drakeford didn't expect his ProCharged Mustang to run quite as quick as it did during the third qualifier for Edelbrock Renegade, but he was more than happy with the 4.635 that put him at the top. A tire adjustment during the 4th round didn't pan out, but he remained at the top of the sheets going into eliminations today.

Sondra Leslie's Limited Street Mustang has proven to be problematic all weekend long, and her third qualifying pass produced a big wheelie and an eventual brush with the retaining wall. Her team repaired the pony for the 4thqualifier, but it continued to be a bucking bronco that they will need to break before eliminations begin.

Despite breaking a transmission and having to swap in a borrowed synchronized T56 Magnum that he has to shift much slower than normal, Anthony Heard still claimed the top qualified spot in the TREMEC Stick Shift Shootout with a 9.66 average from his turbocharged, small-block-Ford-powered Mustang.

QA1 True Street raced well into Saturday night, as the class was 117 cars strong. Mike Jovanis of Wall, New Jersey, was victorious, averaging 7.831 seconds over his three runs in his LX Mustang.

John Urist had some valvetrain issues in his Coyote-powered Street Outlaw Mustang early in the weekend, but having got on the qualifying sheets in the first round, he and his Hellion Turbo team took all-day Saturday to work on the car rather than thrash through the cold night to make additional qualifying runs.

Hellion's B-team has been making steady progress on their new War Eagle Edelbrock Renegade Mustang, and Dwayne James was more than pleased with the 4.665 that his daughter Haley ran in the final qualifying round. That time put them third on the sheet, behind Joel Greathouse and Walter Drakeford.

The Innovative Racecraft and Li Tuning and Racing Florida N/T Shootout went off without a hitch last night, and after the eliminations had finished, David Wayne Green and his nitrous-assisted, classic Mustang was the winner over Raul Torres and his China WhiTTe twin-turbo Mustang.

Along with the after hours N/T Shootout, the NMRA Spring Break Shootout also hosted the Bradenton Motorsports Park Street Car Shootout. In the final round of competition, and a New Jersey vs. New Jersey battle for the Garden State, it was Donato Sierchio and his twin-turbo, Fox-Body Mustang who was victorious over QA1 True Street winner Mike Jovanis and his single-turbo Fox Mustang. Both racers are competing in the JLT Performance Spring Break Shootout today.

JDM Engineering Limited Street racer Larry Starost is moving to round 2, but enlisted some help from Lujan Motorsports to remedy his loose hood fasteners that he noticed in round 1 before the hood decides to launch in the air.

Edelbrock Renegade racer Bart Tobener was the victor of a second-round pedal fest against Haley James. To make sure everything is on the up and up, he naturally had to provide a fuel sample to the tech officials before advancing to the next round.
2020
,
Coverage
,
nmra
,
Spring Break Shootout